A guide to what BH characters are wearing 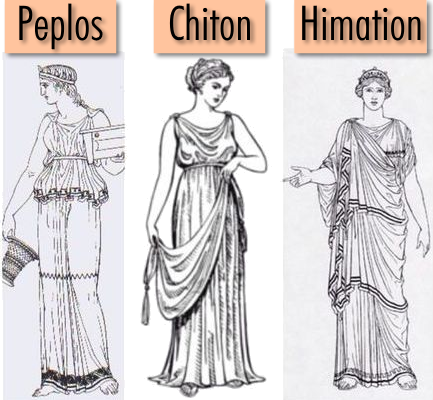 In the late 940s of the 4th Age, draped, loose-fitting, free-flowing homemade garments are the hottest fashion trend in Mythoversal Thebes and across the Lands of Hellas. These styles start with standard rectangles of wool, flax linen, or silk. These are then folded across a body to form a garment that's fastened with pins or brooches.   Fabrics worn by the common folk start as off-white, their natural undyed state, and gradually take on brown and gray shades of collected dirt and grime. The priesthood is distinguished by bright white linens that denote purity and premium access to soap. The noble classes wear vibrant colors and patterns as a sign of wealth and status.   The noble classes also wear clothing of more tightly woven linens and softer wools than the coarse fabrics of the commoners. Upper-class garments may be further decorated with embroidery, precious stones, or bits of gold.

KY-t’n
A basic sheet-based garment for men and women, resembling a Roman toga, the chiton can be worn on its own or under a himation. The rectangular sheet of fabric is folded around the body, fastened at the shoulders, and expertly draped.

PEP-luss
An extra-long chiton, allowing the top to be folded down about a third of the way before the sheet is folded, creating an extra layer that gives the illusion of wearing a chiton with a second shorter garment on top. The back part of the peplos can be raised over the head as a hood or veil.

hi-MAT-ee-awn
The himation is an outer garment of thicker material worn by both men and women.   In the story, the himation may also be called a shawl if made to cover only the shoulders, a cloak if made to fall below the waist, or a mantle if it extends to the floor. Members of Tribe Echion tend to wear dark green himations while members of Tribe Chthonius, along with the royal family, are the only ones allowed to wear Tyrian purple.

KLAY-meez
A blanket-sized rectangle of cloth worn by young men on the move, seen most often on soldiers, hunters, and messengers. The chlamys is pinned at the right shoulder and is either wrapped around the waist or allowed to flow free. It can be worn over a chiton, over a breastplate, or by itself.   In the story, the Theban military chlamyses are gray with blue edging and are fastened by an insignia of rank. Palace guards wear white chlamyses with red edging, while ordinary city guards wear white chlamyses with green edging.

SHROH-fy-on
The strophion is a women’s undergarment, functioning as a bra, made from a wide band of wool or linen and tied behind the shoulder blades.

PEER-i-zoh-mah
A triangular loincloth worn as an undergarment by men and women. Acrobats, athletes, and soldiers in training may strip to their perizomas to allow for a wider range of movement.   In the story, the perizoma may also be called a strap or thong.

Hellenic clothing is held together by copper or bronze fasteners resembling modern safety pins, which either pass through two layers or are inserted into small slits resembling buttonholes. The fasteners are functional, and may also be decorated to convey social status or military rank. The fanciest fasteners, made from silver or gold and styled as jewelry, are referred to in the story as brooches.

A girdle or belt is worn by men and women alike to gather the fabric of a chiton or peplos about the waist.   In the story, the only difference between a girdle and a belt is its thickness. Often, an ordinary rope can serve the job of being a belt.

PEH-tah-sos
A straw, felt, or leather hat with a broad, floppy brim worn by farmers, travelers, rural folks who spend their time in the sun, and the messenger god Hermes. It often has a strap so that it can be kept on a person’s back when not being worn.

Gold and silver rings, wreaths, diadems, bracelets, armbands, pins, pendants, necklaces, and earrings are popular among the noble families. Many items have been passed down through generations and have stories attached to them. Popular styles depict deities or a meander pattern that symbolized eternity. Gems, pearls, coral, bone, enamel, and semi-precious stones are often embedded in the design.

People typically to barefoot while at home and wear sandals or slippers outside the house.

AH-ky-t’n
The style of wearing a long himation with nothing under it.

The style of allowing a chiton to remain open on one side. Favored by men and by women who want to express a daring nature.

The style of stitching the open seam of a chiton along its length to create a tube of fabric. Favored by women who prefer to display a modest appearance.

A long chiton or peplos can be shortened by pulling the fabric up and wrapping it around the belt. In the story, Pyrrha uses this technique to turn a formal peplos into a knee-length garment more suited to running and climbing.

fie-no-MEH-ri-days
Literally “thigh-display.” A style among young unmarried women of stitching the seam of a chiton from the top edge to thigh-length and creating a second slit on the other side to expose the legs.

The peplos can be worn as a hoodie by pulling the material on the back over the head to create a hood. For women, this may also be extended as a veil.

Because articles of clothing are just rectangles of cloth, they can also be used interchangeably as bedding, blankets, or burial shrouds.

Great article! First off I love the layout epspecially the font for the headers which really brings the greek feeling across. I also like how you defined all different types in a clear and short manner making it quite easy to read through.

Great article :D I love the historical aspects of the clothing. Comparing the different types of clothes one after another like that is very helpful. The example of styles at the end is also great and really bring those clothes and their wearer alive for us :D 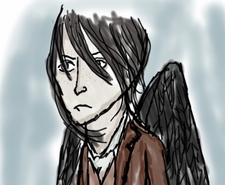 Awesome article. :D I love Ancient Greece, so I look forward to learning more about your world. ;) Also the layout of your article is beautiful.