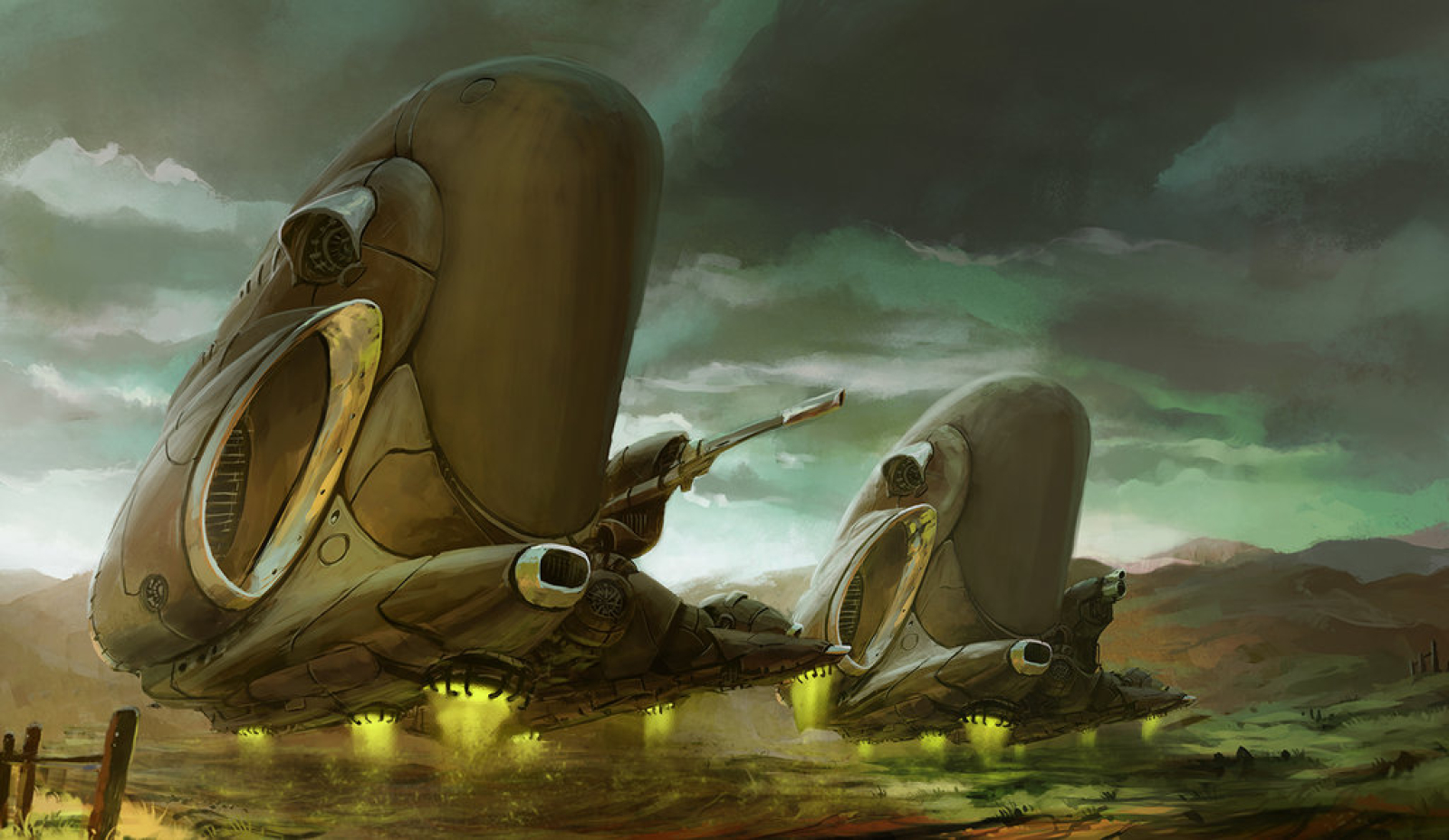 Art by Domen_art from Deviantart

The Estoyan War Wagons are arcane machines that stand at 30 meters in height and 20 meters in length. They each boast an arsenal of Alfen Lances that measure almost 18 meters in length, the largest alfen lances ever built. The war wagons silently hover 10 meters above the ground, and when mobile, emit a soft hum that can be heard almost 100 meters away. There are only 18 in existence. Seven of them are sent with Expedition Demeter, while the others are left to protect the palace at Rouxsgate. The War Wagon has three uses. It is a defensive installation able to assail foes from afar with what its lances. It is also used as a siege and assault weapon with a built in ram and a max speed of 30km an hour. The third and final use is as a transport. The interior is capable of housing up to 40 people comfortably outside of the 4 required to operate it.

In the warehouse districts of Yithwitch, there is a large complex built out of stone and wood. its walls are 40 meters high and the complex measures at 200 meters long on each side. A place of innovation and invention, it was called The Arcanist's Workshop, where all the great minds would show their inventions to the nobility in hopes of finding investors. The wide open space acted as a market of ideas rather than of goods.
The nobles gathered around as he spoke, listening to each word and considering the offer carefully. He, an elf of the elven courts, spoke with a silver tongue and clearly didn't mind the attention. He wore a form fitting green tunic and loose black leather trousers withe leather boots that were freshly shined.
The behemoth that hovered quietly in the air behind him had the nobles in a frenzy. Some showed fear, others baffled in amazement. The war wagon, as he called it, was the latest invention of the elves. It towered over them at 30 meters and was 20 meters in length. they wondered how it even got in the building without raising notice.
" We have procured the materials for our mages to produce 18 of these massive siege engines... Interested?"

A Device From Myth and Legend

The war wagons were modeled after an alfen mythological machine. The siobhalfen (sheev-al-fen) meaning war elves were immortal soldiers who guard the gardens of the afterlife. They are said to not ride on horseback but within giant beasts of stone and metal. These Siobhlthig (Sheeov-le-theeg), literally meaning war wagons, would knock down city walls with a built in ram, slaughter legions of soldiers with its mounted lances, and radiated an aura that amplified arcane power around it.

The war wagon is not truly a complex device, the process of building one, however, is extremely complicated.. The amount of skill needed to cut the stone was enough to slow production. Finding enough people with the right skill sets is often the hardest part. According to the court, it took a mountain of gold just to commission the one responsible for the complex hinges and latches to build a wagon's weapon attachments alone.

Learning from the Past

the process of building such a thing was most difficult for the high elves in Estoya, who first had to relearn how to shape the materials like their ancestors did. The learned how to conjure Sun-cutters, ethereal blades that glow with extreme heat like the sun. Massive stones of granite were found and the craftsmen used the cutters to sculpt every piece of the wagon, shaping the stone on site. The best enchanters in the nation were commissioned to begin work on the complex formula needed to operate the wagons. They spent many months working out the various problems until they perfected the enchantments within the wagon. The next step was to find a blacksmith capable of building the metal plating, lance housings, and hinges that are used throughout the wagon. Building these components can take many months and that's assuming all goes well. The final step is power. The alfen shapers must build a self sustaining source of magical energy, something the alfen have known how to do for eons. The process can be tedious, as containing that much arcane energy in a single space can be dangerous until its stable, requiring Arcanists to be on site at all times to help keep the energy contained. Once built it is placed inside and the device is tested.

If the test results in failure, as it often does, everyone involved must go back and run through the entire process in hopes of finding out what is preventing operation. Most of the time, its a minor hiccup in calculation. A lance may be a fraction of an inch wider than the formula in the enchantments show, a hinge was never lubricated properly, or a metal plate warped. Regardless, a solution can usually be found. There have been two cases where the entire project had to be scrapped and restarted due to problems that were far to complex to solve.

I think keeping your war wagons alive would be a very interesting issue to address in a game; these wagons seem extremely useful, but once destroyed, they ABSOLUTELY cannot be replaced. or, at least, not without a ridiculous amount of power or influence. On the other hand, if you see a group protected by even one war wagon, you know, for better or worse, that they cannot be any ordinary group of adventurers. In fact, the probability that that particular group is not Expedition Demeter is staggeringly low...

Your absolutely correct. The wagons were an identifying marker for the expedition in one way or another. The wagons allowed the expedition to have a military presence where ever it goes. Keeping them safe is essential. The only other time you see them is in Estoyan military. They are a critical part of their strength.