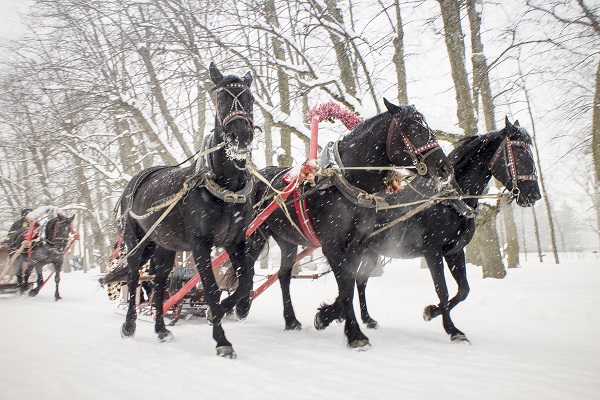 Troika in the Snow by iStockPhoto.com\BarashenkovAnton

March of the Troika

The city rejoiced when Glain became the Lord of the Land. There was a festival with a formal ball at the end of the week. He came to the markets and lesser quarters. Met with family elders and district administrators. Their debts released from them and there was joy in the city. It glowed even at night, so few worried when the snow started.

Glain's visits continued and each time he had one request. It wasn't much, and no one seemed to mind. I was too young to have much responsibility. I simply had to peel potatoes or cook at my parents' market stand. I would also go visit my friend in the tree.

Glain would listen to every problem. Then say, "Let me think on that. While I'm doing that, I need you to ..." Many people, my parents included, did whatever he requested. From my point of view, I thought they were being respectful.

One day I came home from visiting my friend. My parents were packing up everything in the market stand. Crates stacked tall as they finished. Each had a series of symbols on them. I didn't recognize the language. My parents explained that Glain needed us to move.

"Everyone will get a Troika because we are going to do something amazing. Move the city. This will solve so many problems. We will build everything anew."

The crates and gear were loaded into wagons. A train of wagons came into and out of the market nonstop for two days. We were instructed to keep what we needed for a five-day journey. My parents were so excited when their Troika came. They felt like nobles. On the way out of town, though I felt an urgent discomfort. We had to stop.

I told them. "Pull over. Pull over." I stepped off the sled of the Troika. I did not have to go to the bathroom.

I continued, "I'm staying." I may have thumped my foot.

"My friend needs someone to look after her." As you can imagine, that didn't go over very well.

My parents pleaded, begged, then yelled. "We must go, Kibber. We owe a debt."

I then realized the people weren't freed from their debts. Glain transferred their debts to himself. He forced them to leave. What could come next scared me so I ran for the tree, where the old library used to stand. I did not look back.

The design of the Troika allowed a higher speed compared to other vehicles. The different gaits were considered an example of great beauty in motion. Decorations were often added for celebrations and festivals. The left rein was only connected to the left position horse, the right rein was connected to the right position horse. The vehicle was used with teams of fresh horses staioned across long distances to speed deliveries when magical teleportation was not possible.

There is something more, follow my world to see the extra details about a Troika!


Troika in the Cult of Cold

There is one more way Troika were used in Glain's Domain. He trained fierce warriors of cold and magic, Warlocks, who drove troika with elemental Elk. Even on the coldest days the air swirled around the beasts as cold seeped from them into the world nearby.

The Warlocks used their magic to make the Troika fly. Rumors spread that the Elk could track heat when chasing a mark. The chariots attached to the Elk were all equiped with sleds at this point. Runes and unreadable inscriptions were scrawled all over the chariots. Two lances with flags were mounted to the chariot.

I saw them in use in battle against the Fire Birds. I think I prefer to hop.

I appreciate you reading my flash fiction article. This story explores the 2022 World Anvil Summer Camp theme of Expanse. The flash fiction doubling as worldbuilding may be used as background for ttrpg games or as content in other writing projects.