"Yessiree, I am going to fish the world, all the famous spots. That's what brought me here. And I'll tell you, I have seen it all. Everything mother nature can throw at ya. I'm just not surprised by her anymore. I am a lucky son of a gun though and thankful for it *kisses lucky rock*. You know what is the best luck when on a long voyage though? Good people. That is what a voyage is all about. Plus the stories, yes, you don't want to be missing out on the amazing stories from the sea. I'll probably write a book when I'm done fishing the world." 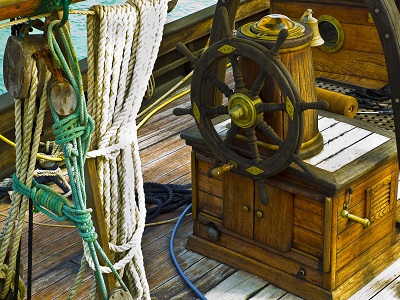 Old wooden boat by iStock.com/Francesco Scatena
Finn has been living on a boat since before he could walk. He would say "That old boat was a lovely place to grow up - the Mara X." He would add that the X stood for 10. Ten was how many fishing boats his dad, Amos, had been through before he was 13 years old. Amos would say he just cast resurrection after a bad storm or incident when he got a new boat. This story is one that Finn repeats often. He ends with "Each one seemed to have the same feel and touch to her so who knows, he might have been on to something."

His parents worked as extreme fishing guides for some of the nobles and uppity ups along the coast. Their reputation for catching the best fish and knowing the prime spots earned them a comfortable lifestyle. Finn grew up giving away most of the fish he caught to those who needed food vs having to sell fish. His parents were also quick to donate to the church or to the poor. They had nothing extragant but always enough to buy the best equipment and boats.

A sharp mind and a healthy disrespect for the rich that abused their power led Finn to plan a few heists. Not to steal gold but to take something of real value to the target. After a few minor successes, the heists began to get elaborate. A near miss almost brought the whole routine crashing down and that is when Finn decided he might be safer exploring the world...and before anyone traced anything to him.

He talked to his parents about an idea that had been on his mind. He had wanted to find some exotic places to fish. His mom was probably the unintentional source of that idea. She had a nack for finding the unique corners of the ocean. "Finn, the seas were boiling and tossing us around but the waves had a story to tell..." As many fish stories as he heard from his dad, he would hear just as many from his mom about the adventures they had navigating to the treasures of the sea.

His parents were mostly retired by this point and agreed to the plan. They stocked the Mara XXII and helped Finn sketch out a plan with a few places they had heard about. Finn promised to return with grand stories and looked forward to settling down after his trip. 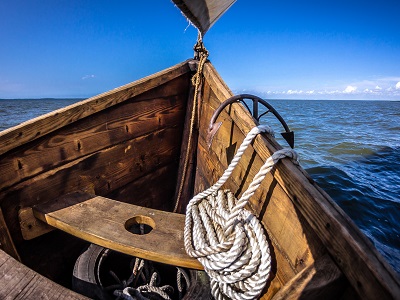 Front of wooden fishing boat by IStock.com/Ja'crispy Imagery
It might just have been having the right perspective but for Finn being out in the world seemed as pleasant as growing up, even with the rough seas and a few run-ins with unsavory types. Finn was willing to part with anything of value and told a lot of stories, so he managed to get out of a few scraps in port taverns without a scratch. His travels took him further and further north. He found great places to fish in the rushing rivers, further out in the ocean in the wild islands, and in the winter at the frozen lakes of the far North.

While waiting for the spring, in the Far North, he stayed with an indigious tribe. The winter was rough and hunting sparse. The tribe suffered losses from the tough weather but also due to a darker force. Finn used his investigation skills, honed from planning heists, to uncover a murderer. He accompanied a hunting party to capture the murderer. The wilds of the north were desolate in the winter but hidden valleys, geothermally warmed caves, and ruins held wonderous and dangerous beasts.

One such beast surprised the hunting party. A giant eel or worm-like beast erupted from a frozen lake in the middle of the hunting party as they were trying to cross. The hunting party stabbed with their spears but several were seriously wounded early in the fight. The beast had sharp spikes and a hardened headplate, which allowed it to break through the ice, and were also horrific weapons. Finn pulled out his crossbow, Bessie, and put a bolt right into a break in it's leathery skin. If you swap fish stories with Finn, you can be sure he will tell you about the time he was fishing on a frozen lake and caught an eel large enough to feed the entire tribe. 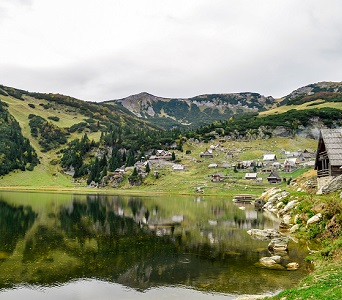 by iStock.com/Adnan Vejzovic
"This town had the best fishing, right from the shore. I pulled half a dozen fish out before the sun cleared the hills." 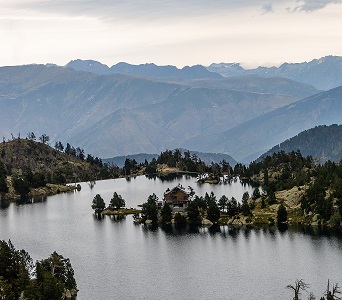 by iStockphoto.com/Renato Martinho
"It took 2 days to travel to this inland lake. Made it in time for an annual festival. It was worth the trip." 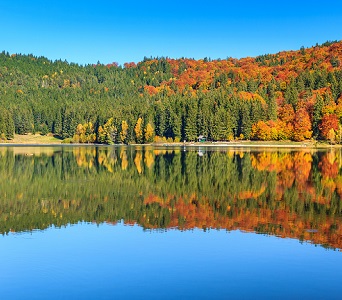 by iStock.com/Janoka82
"Not a single fish this day. Got distracted hiking and looking at the changing colors of the trees."

Finn saved the tribe that winter and shared many fish with new friends along his journey. He has not made it back to his parents yet. He is still collecting fishing stories. You might run into him one day by a lake or on the dock. You'll know it's him if he tries to tell you his life story while giving you a fish for dinner, no coin needed.

"Fishing requires you to be resourceful. I'm a bit of a jack of all trades. I can gather what I need to live and make a comfortable living at that. Usually have a few fish to pass around the community too. I don't charge for them, that doesn't seem right. I do sell interesting things I find, some import/export, whatever I need if I need a few coins." 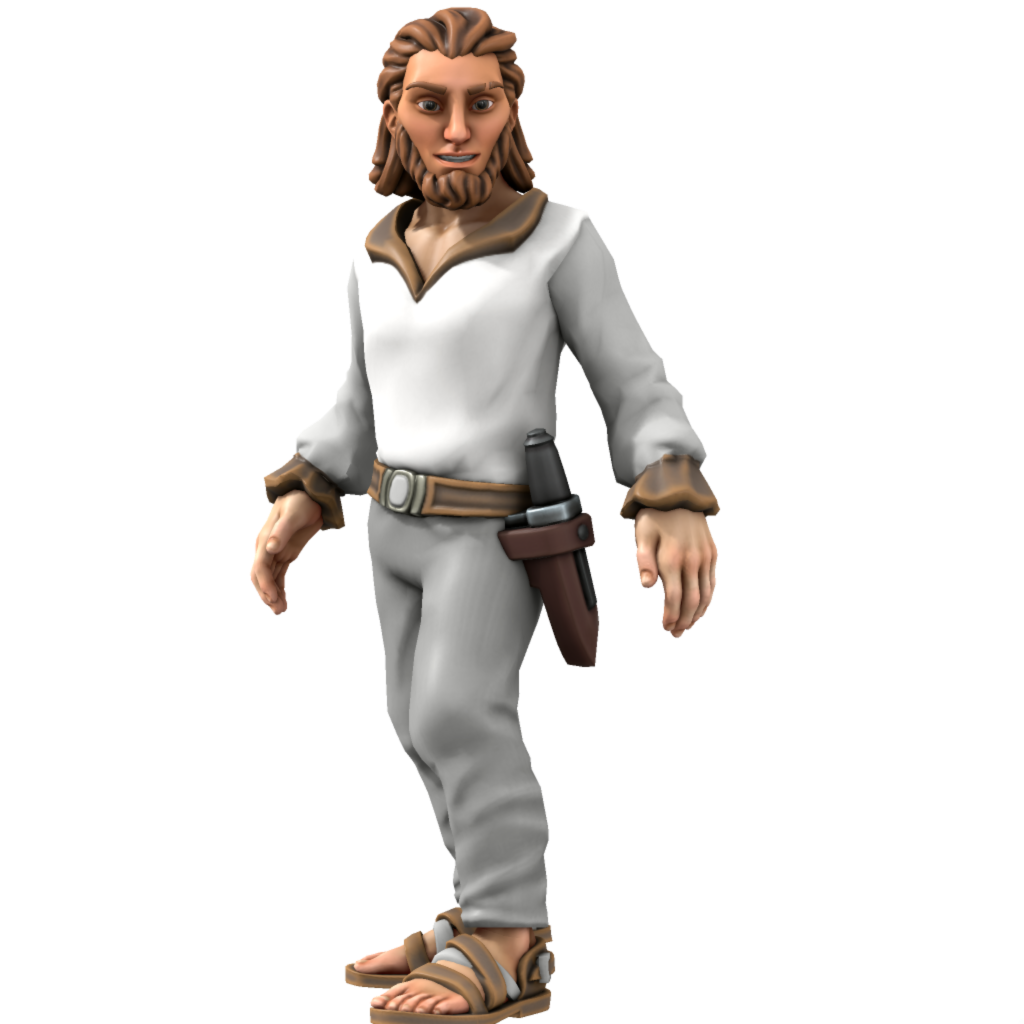 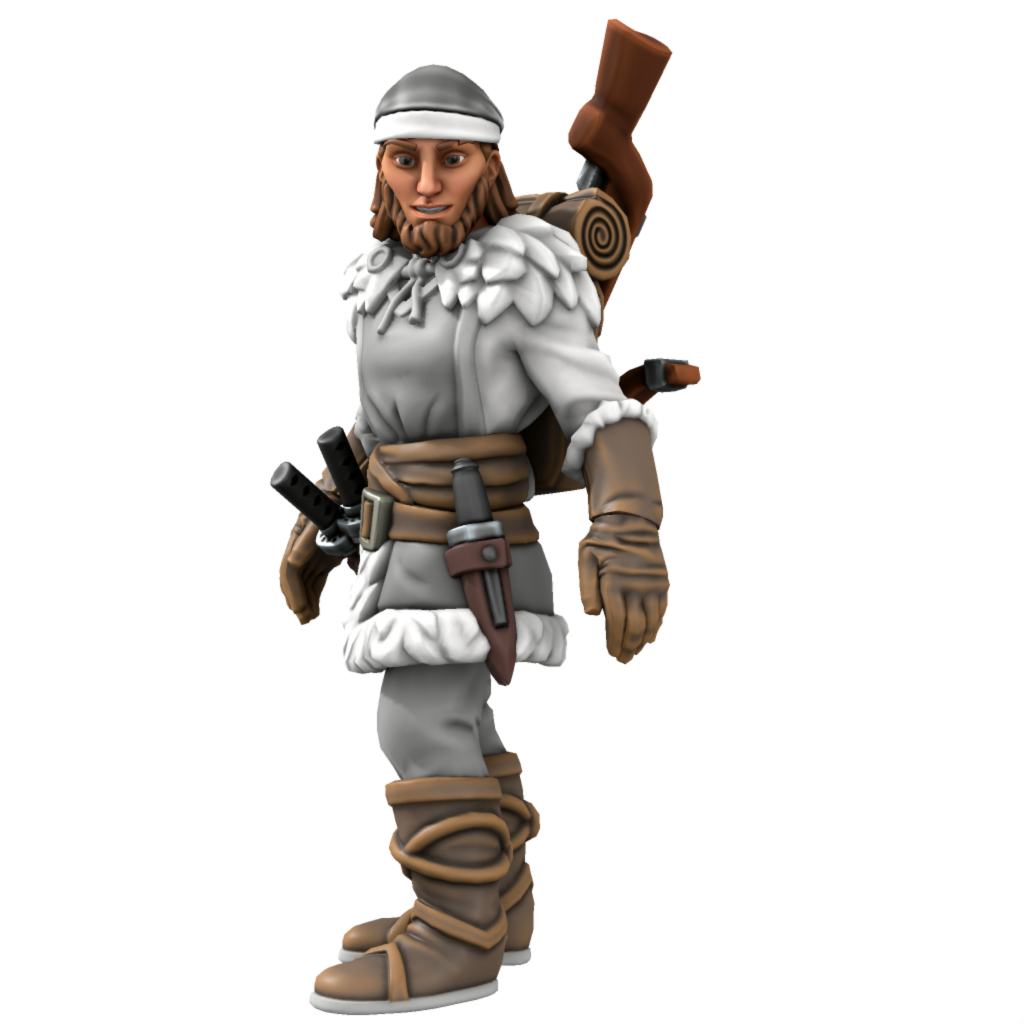 Phineas in winter gear by Samsaratg using Heroforge
You see a short sword and dagger on his right hip. A fillet knife on his left. 'Bessie', his crossbow on his back along with his bedroll and a collection of items from his tackle box because "You never know when the fish will be biting." He is quick on his feet but has a laid back personality. He might be too quick for his own good when he joins in on the latest game, project, or mission but makes things work with his sharp mind or a long story. 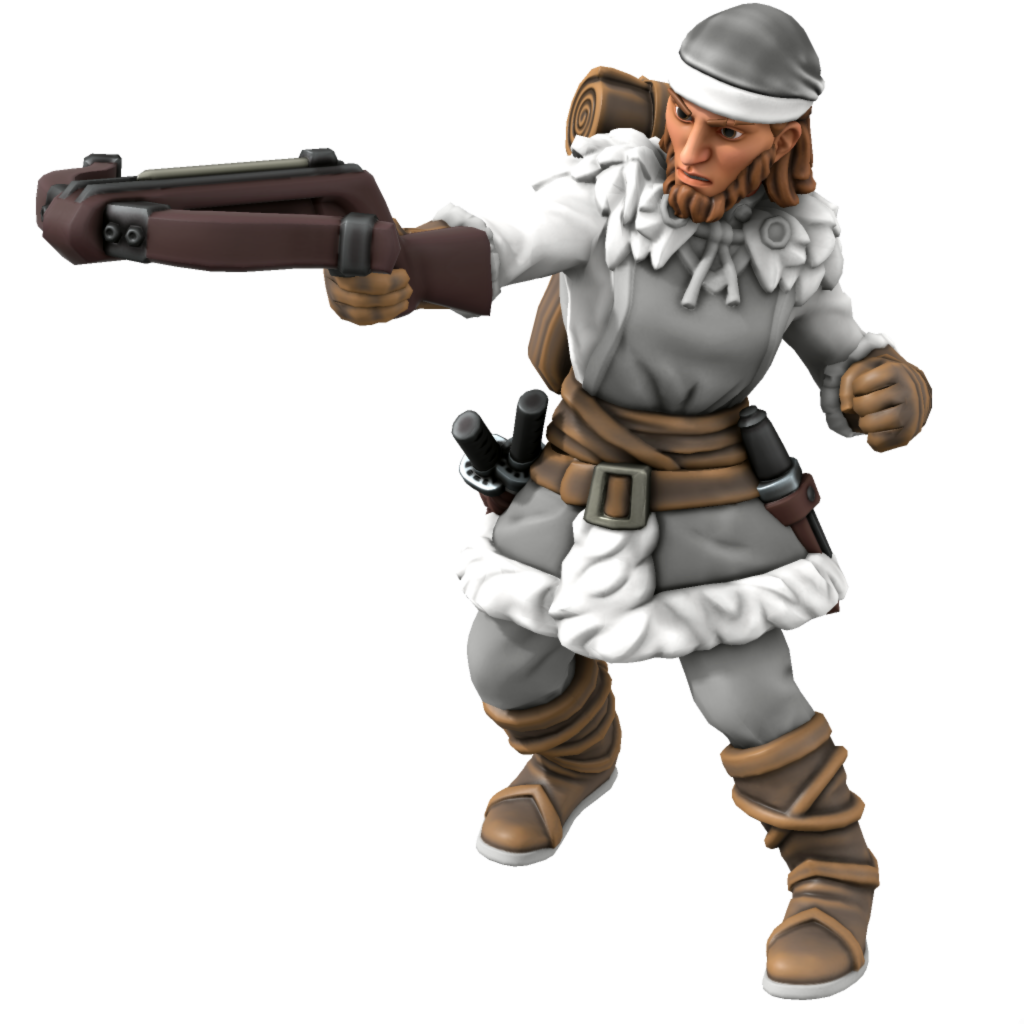 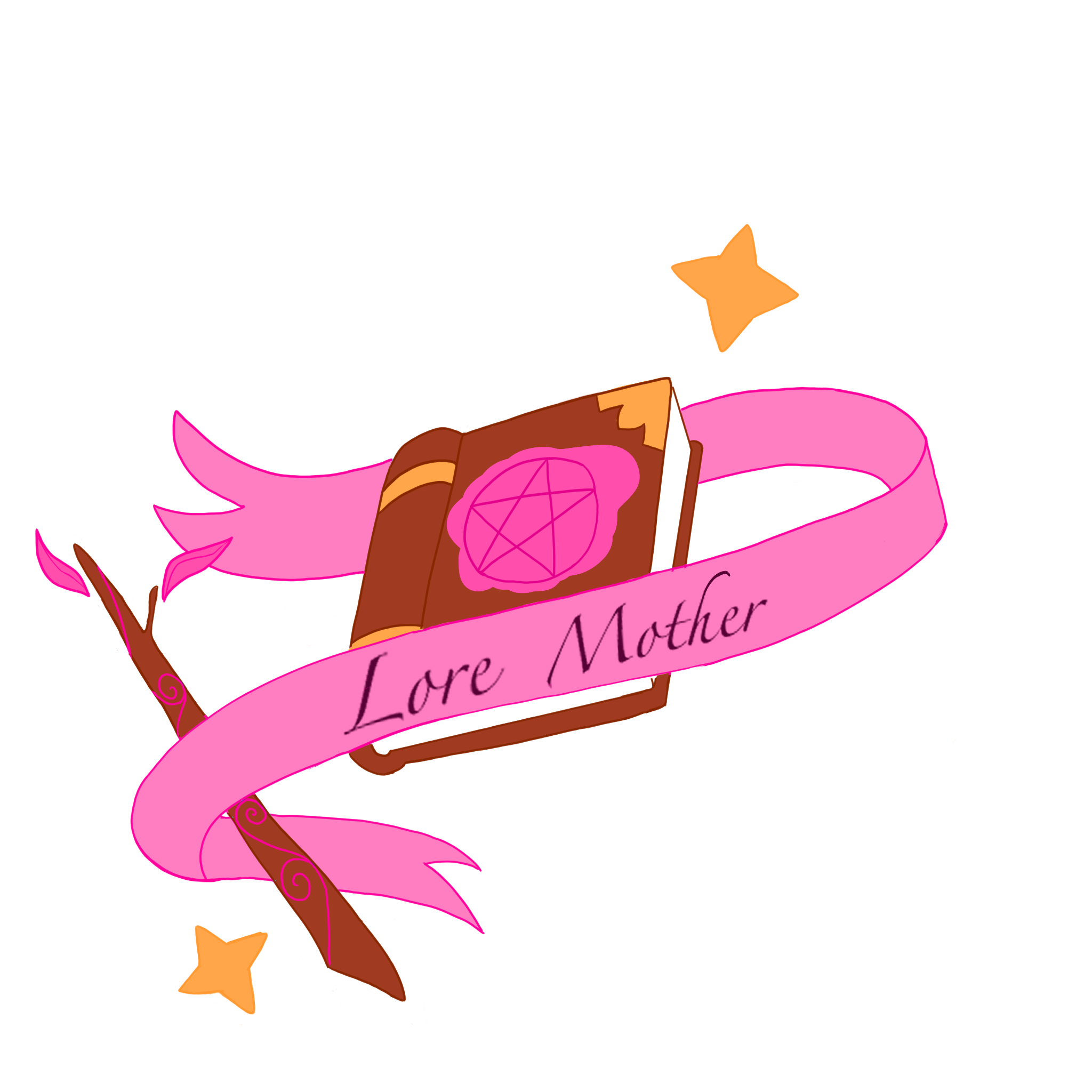 I love the way you incorporated different poses, quotes, and the scrapbook to give the article a really dynamic feel!

Interesting character - who doesn't love a few good heists? :D The poses are a nice touch, giving it diffeent looks on the character and more of a dynamic feeling.   If there was any feedback, I'd mention there's not much detail on his mother, or the tribe he spends the time with, or where they are located. Details that could really flesh out some parts of him (what habits did he pick up from there, etc)   Awesome stuff :)

Thanks! If anything I worry about being too wordy so I appreciate that glimpse on what a reader would wonder more about/what would be useful to know. That will help with edits.

Long live Bessie, slayer of Eels! And the lad that wielded her, eh, he had some value. 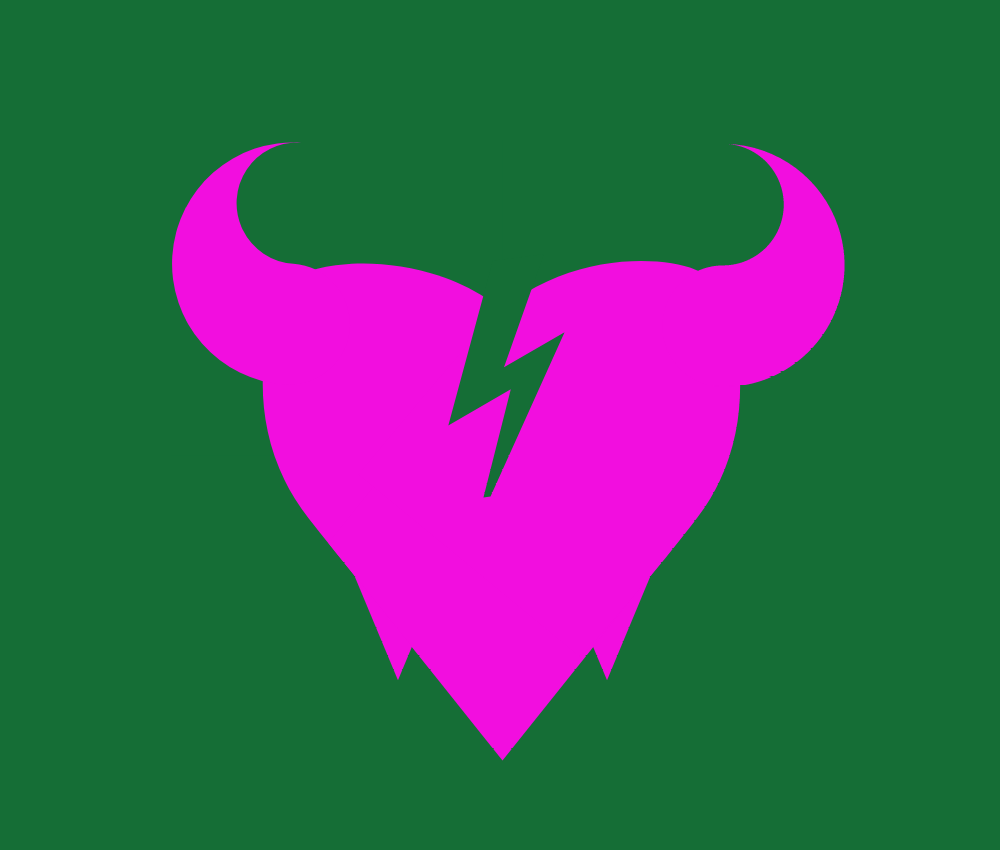 Ngl, I'm vibing with the fisherman