Birth Traditions of The People

In an effort to maintain the harmonious community among the many birth traditions found in Etonia, the council commissioned a study. Funds were provided to the Avast Library to pay for two scribes to complete the study. Scribes were sent to conduct interviews and gather stories from residents to provide to a report to the council as well as add to the library. This body of knowledge would inform the council when making decisions that impacted the people of the city.

"Grandma Nuray, please continue, you were talking about the stories of The People when they were in the forest. The researchers from the library are waiting."   Grandma Nuray looked from her granddaughter to the women with scroll pads. "Sanem, these young woman have nice jobs. You might like to do that."   "Yes Grandma, I have you to keep me busy. They would like to keep making notes. What would happen when a baby was born?"   "It was a celebrated time. Every baby was important to the community and celebrated. Babies were too rare. A new arrival would help fill the seats around the fire so a common expression of 'May all your seats be filled' was used when two family units came together. I have not heard that spoken in such a long time. My grandson humors me but he has been in the guard for a while."   "Grandma, back to your story."   "Yes, yes. A long time ago The People had been cast out and scattered through the forest. They were considered weaker than the others but before long, ash was all that remained from once great cities. We were scattered and babies were so rare, each had to be protected. The first birth was a special event for a Numsad, it was a rite of passage and she gained prestige among all the families in the forest."

The People were cast out because they were seen as inferior. They were often half orc and half human and of smaller stature but also shaman and individuals that felt a connection to the forest. Magic was not valued and the forest was a tool for greed and power. This was a dark time for The People. All of the elders in Etonia talked of this time as being spoken of by their grandparents. It is estimated that the events they described occurred over 150 years ago. They describe Acgozluk as a demon that drove the majority of their civiliation to destruction. The people of the civilization became so preoccupied with power that they lost fertility. Acgozluk was described as culling souls and eventually started wars to spread its reach other regions. The civilization crumbed. Acgozluk lost it's influence in the world in the end as there were no more souls around to follow it.   It seems that the bond with the forest and different lifestyle of The People allowed them to regain fertility but it was slow process. Early families were rarely reported to have more than 2 children. Any significant disaster or stress could have sent the population spiraling to extinction. This had an impact on many aspects of their culture. Childbirth became an event that elevated a woman to the most important person in the community. Babies were protected and supported by all members of the families.

Blessing of the Community

Raising children was also very much a community responsiblity for the families. Extended families of 8-12 would typically travel together. Children tended to be born in the late summer. All the scattered families seemed to be on this schedule. When children were born families would make their way to common gathering sites. Sometimes 4 or 5 families would congregate at these sites. Family leaders and Shaman would perform a blessing on the babies, thanking the forest for helping fill the seats at the fire. Family members would gather bark from trees, water from the streams, small stones, and embers from the fire as components of this blessing. First hand accounts from elderly half-orcs living in Etonia today recall that after the ceremony there were very few illnesses and childhood deaths due to illness.   It is very plausible in this scribe's eyes, that the gatherings themselves reinforced the cycles of births as the families intermingled at the sites. Celebrations and ceremony would have provided ample opportunities for procreation. In addition several elders mentioned that if a family was smaller in size after a year, members of a larger family would join the smaller family to balance out the population among all the families present.

When a child was 4 years old, during the "Blessings of the Community" gatherings another ceremony was performed. It was called the Awakening Ritual. Stories would be told to the 4 year olds and they were required to memorize them and recite them. These teachings were similar to mindfulness technics of monks and parables told by many religions to protect its adherents from common problems in the world both environmental and social. A child that completed the ritual was thought to be immune to Acgozluk. The elders that survive today believe that this put the nail in the coffin of Acgozluk and freed The People from the curse.

About 10 years ago the families started losing individuals. They would disappear in the forest and not be heard from again. Families became suspicious of other families and the Blessings of the Community stopped occuring. Individuals continued to be lost so many families left the forest and headed toward the coast. As Etonia began to grow and the council arrived bringing a burst of commerce and construction. This coinsided with the migration of The People and they account for 30% of the population of Etonia at this time. 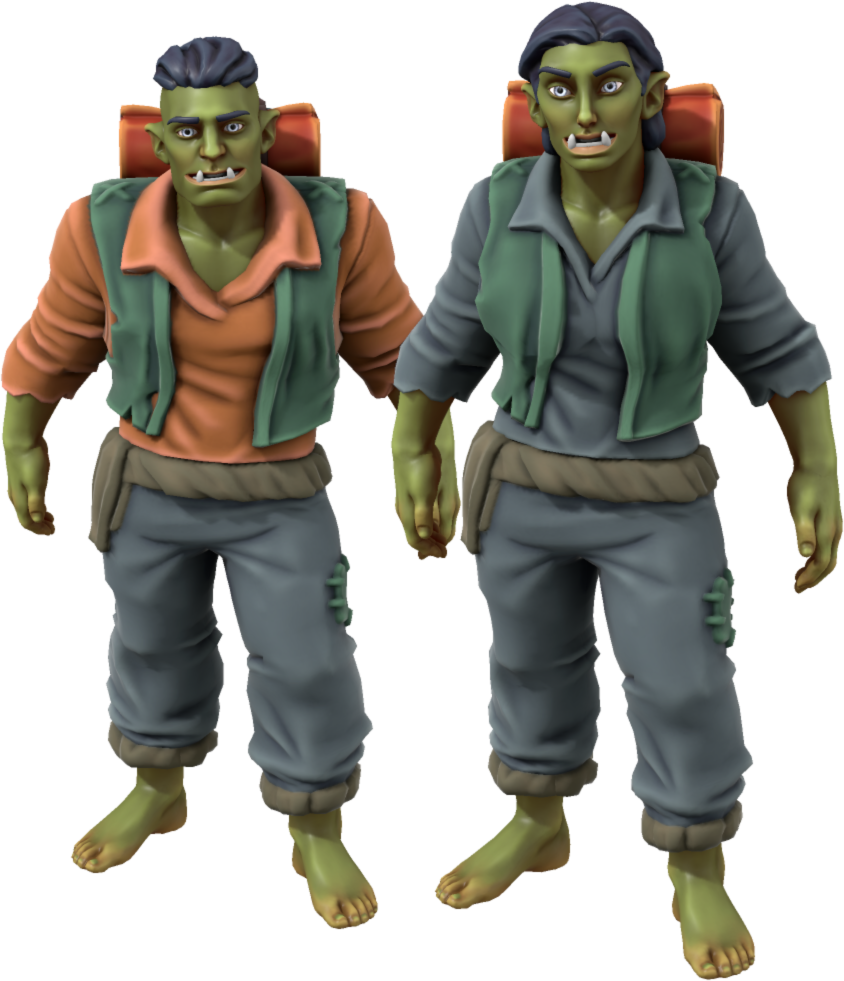 by Samsarat using Heroforge
Numbor and Numsad in common garments with travel gear. The names refer to young members of the family who have not obtained their prestige but were on the path to that achievement. The names reflect gender as well since female prestige is typically earn through childbirth and male prestige through a ritual solo hunt.   A third gender, Numsador, are prevelant and often went on to become family shaman and midwives. They did not earn their prestige through one of the typical paths and were valued second to the Numsad in their potential for the family.

The gestation period was nearly 3 months longer than similar groups. The mother was not allowed to touch certain plants, bodies of water, or perform certain tasks while pregnant. Concerns on the influence of Acgozluk and other superstitions made this very restrictive. Cravings were attented to promptly as they were seen as a communication on what the baby needed to grow, unless they were one of the restricted plants. Water was boiled and used in tea for mothers to drink.

The birth process was long. Three days on average. The likelihood of a safe birth increased by 30% with the presence of a midwife. The practice was handed down over generations by word of mouth plus trial and error. Families without a midwife would immediately seek out other family groups for assistance.

The entire family participated as caregivers to a new baby. The mother would nurse until age 2 but all members of the family were expected to carry and comfort the baby. Mothers were held in the highest esteem so would be given time to rest and eat while the baby was cared for by other members of the family. The baby rarely touched the ground before its first birthday. Families were extremely superstitious about the effects of leaving a baby in touch with the world until it was older, healthy, and growing.

Cover image: Forest During the Daytime by Tim Mossholder