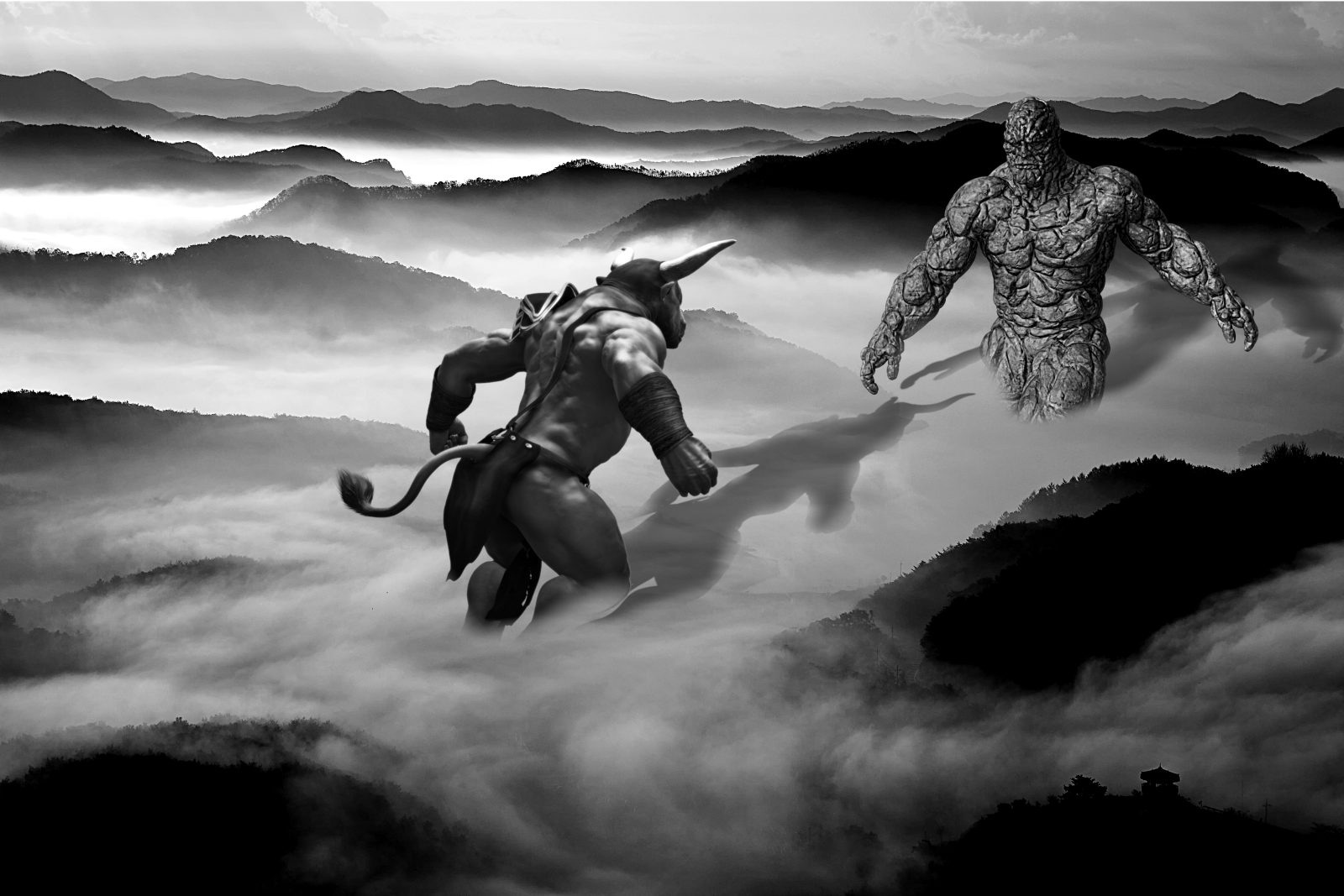 The God of Constructs

Sekhmet is known to be the god Constructs, some also consider him the god of building. He is fairly simple, and polite to most he meets, however, he can get fairly destructive when those he cares for are harmed.

He resembles an eroded stone golem.

His body is comprised of cracked and eroded stone.

He is missing a large chunk of stone from the right side of his jaw.

He appears to use himself as as storage compartment. Barely visible seams on his chest reveal a compartment doorway.

He usually sits in a manner that makes him appear as a mountain or large group of rocks.

Sekhmet was born in a dwarven settlement located in Grimgar, Mt. Ashe to a happy couple. Despite the fact that he was born disabled, or as the dwarven kin would call, "Flawed", Sekhmet was well taken care of, never needing for anything because he was a dwarf and dwarves took care of their own. The only problem he had through his mortal life was indifference. Sekhmet was unable to look people in the eye, always staring at his feet, and had a serious speech impediment often stuttering or struggling to say certain words. Because of this, he failed to learn how to perform basic social interactions, often making others around him nervous or uncomfortable. This left him undeniably isolated, despite his best efforts.

In his late twenties it was discovered that he was capable of advanced mechanics, engineering and much more, and as a result he began shocking his fellow dwarves daily with new creations. First small things like wind up toys, and mechanical sondials, however as time passed he began to astonish even the king. Sekhmet started to build moving statues, and humanoid constructs made from any materials he could get his hands on. His most prized creation being a large suit that was 15-feet in height, which he could enter and control from within. He used this wonderous machine the help the construction workers in the lower levels of the mountain tunnels, eventually helping his people complete an underground bunker that had started construction when they had first settled Grimgar in the year 873 BN, completing it twenty years before the speculated completion date. Slowly, Sekhmet began to gain the love and approval of his people without the need for him to struggle through conversation.

It was on the 21st of Twi, 1001 BN, the day Mt. Ashe erupted, that Sekhmet truly became a hero to his people. He was in his suit, helping carry a large shipment of supplies in the surface tunnels when Mt. Ashe bellowed out in agony, already in his suit, he walked to the tunnels edge as screaming dwarves pushed pass him only to see the pillar of smoke emerging from the summits newfound mouth. It was then he realized that the dwarves would be fleeing for the bunker, the bunker which was missing a securing bar in the vault door. He ran back to his supply closet two tunnels down as Eden began to quake around him. Several dwarves were crushed in a cave in just at his side as he collected the piece he needed to save his people. Briefly, he stopped to lift a large rock from an injured miner before taking off toward the lower tunnels. Eden shook again, shouting this time as several more tunnels around him collapsed. He reached the vault door just as the other dwarves began screaming.
Down the straight tunnel they could see the cloud of superheated ash rushing toward them. Many dwarves pleaded for Sekhmet to jump inside and fix the piece, but he knew it could only be fitted from the outside once the door had been sealed. Sekhmet simply smiled and closed the door, sealing in the part as the cloud hit him. It was so hot that it melted his flesh to hit suit, and the force from the cloud knocked him into a small pocket of underground water that they had intended to build a well around. He layed there gasping, dying, awaiting his goddess to take him to Elysium, when the rubble was pulled off of him. Two beings stood before him, pulling him from the stone he had been encased in. The man address the lady as his love and told her of his sacrifice as the light faded from his eyes and instead of absolution she gave him a final choice. Either he accepted his death and traveled along with her to Elysium, or she would rebuild him so that he may later build for her. He chose the ladder decision, wishing only to create for a little longer. With that, the lady took off his mechanical helm and kissed his forehead, and he petrified, turning completely to stone. Initially, the lady was confused. Had she failed her loyal creation? But after a moment the man of stone rose, and for the first time ever he looked someone in the eye.

Sekhmet is referenced historically a few times in the Tari wars, typically involving Samurah, Anandres, or Hades, however, he appeared to serve as a neutral party until the day Samurah was attacked. Sekhmet then became a mighty titan and laid waste to what is now known as Sanctuary, a place for freed Hexen to live in peace.

He no longer craves carnal interactions however when he referred to Samurah During the Tari wars he always called her, "Pretty lady" so there is a lot of debate as to if he still finds creatures attractive or not.

Everything that Sekhmet knows he learned on his own, usually through unconventional methods.

He was once tricked by some mean children into eating Piccow dung that was placed under a glamour to look like a Papu fruit. He's never forgotten about it.

He was born disabled and was never able to look another person in the eye, not up until the moment of his mortal death.

Sekhmet understands advanced mathematics, engineering, and mechanics, though he struggles with social ques and interactions.

Sekhmet believes nothing is without worth. Even the broken can be repurposed, just as the rotten or spoiled can be used as fertilizer. He never wastes, and will always find a use for something he's acquired.

Sekhmet doesn't like killing to any degree. This includes small things like fauna and flora. This is why ifhe is in his titan form, he normally won't move too far from where he is before shrinking down so he can mind his step. The only exception to this movement flaw is if Hades, Anandres, or Samurah ask him to fight, as these few he would never deny.

He never throws something away, often rebuilding something else out of whats been broken or finding a new use for it. He dislikes waste.

He is able to look people in the eyes now, however, his speech is still slow and drawn out. An echo of his mortal self.

He's made of a collection of compressed rocks and stone, so he's usually a little dusty.
Alignment
Lawful Good
Ethnicity
Converter
Age
9,142
Date of Birth
The 26th of Syre. 967 BN.
Date of Death
The 21st of Twi, 1001 BN.
Circumstances of Birth
Sekhmet was born disabled.
Circumstances of Death
His death was willing.
Children
Gender
Originally, male. Now, he's neither.
Eyes
The top plate is glass. The inside is unknown, but the iris looks like a cameras lense shudder. They are round shaped and light brown.
Hair
N/A
Skin Tone/Pigmentation
He can be either brown or grey stone, usually appearing with cracks and minor points of erosion.
Height
"Mortal", 15 ft. Titan, 184 ft.
Weight
He always weighs 154 tons.
Known Languages
Dwarven, Common, Elemat, Belani, Elysian

Join The Garden that Burned Discord!
We are a team of fantasy enthusiasts and worldbuilders who wish to give you a unique experience to play, read, or both. We do not want our content redistributed for commercial use, but we do understand that this is a form of art, and art inspires. With that in mind we do not see any problem with the personal use of Edens assets for use in gameplay, however, we do not permit monetization or redistribution of any of Edens assets without prior written consent from the publisher, or one of The Gardens editors, as they also contribute to content additions.