Why do I always contract me cargo to th' Dwarves, ye ask? Cuz I wan' it ta git ta where its goin'. They're the best sea-hands in the world, an' It's been two hunderd years since a Dwarf ship hadda deal with a pirate. It's them slingshots they got... can't be beat!
— Endmere merchant conversion with a business associate

The catapult has been an instrument of war on Cartyrion for a very long time. The Chronicles of Humankind record that Terrmari first rolled them out against the First Kingdom in the Freedom War seven thousand years ago. Before that war ended, though, the men of the First Kingdom had captured and duplicated the device. And as Humans spread across Cartyrion, they brought catapults with them. From that point, even some Orc tribes and others among the fell creatures have adopted their use with few, if any changes to the technology.

Within the Kingdoms of Humankind, warfare was common, and the catapult was a critical part of every major battle. Firing heavy stones, they were used alongside their larger cousins, the trebuchets, to reduce the walls of castles. Firing projectiles fashioned by the alchemists, they rained fire - or worse - down upon enemy formations and towns. In this sense, they can be said to have had an impact upon the political shape of the world of Cartyrion over the years.

The Dwarves, with Gnomish help, had actually developed the device even earlier. Some say that Terrmari obtained the technology from a Gnome banished from the Waking Delve. For the Dwarves, these were defensive weapons mostly - fired from secure mountainside positions against hordes assaulting their Delves. Like the devices built and wielded by men and other races, the Dwarven devices passed through the centuries unchanged - until two hundred years ago. This was when the Dwarves of Glitterhold developed a new, far more powerful catapult. Because of clan loyalties - and all Dwarves everwhere on Cartyrion are from one of the Twelve Clans of the Awakened Ones - the secrets of this new device were delivered to all other Dwarven Delves, and to the Seafarers of Cliffport as well.

Original catapult technology has been around on Cartyrion for thousands of years. For most of that time, every military or outlaw force employing them was armed with the same basic technology. Ropes made of hemp were bundled together and tightly twisted after inserting a stout wooden arm into the side of the bundle. This tight twisting stored up torsional energy which was added to by pulling back the firing arm for loading. When released, the firing arm swung forward quickly, hurling the contents of the bucket at the end of the arm.

The usual material for the ropes is hemp or jute fiber. These have some stretch in them, which is where the torsion comes from, but not much. The biggest problem with these materials is that if they are tensioned too much, or too often, the fibers begin to break. Once enough of the rope fails, the catapult is useless.

The basic change discovered two hundred years ago by the Dwarves of the Glitterhold involves weaving the torsion ropes out of cave spider silk instead of the traditional hemp fibers. The result is a stronger rope that can be tensioned even further. In catapult technology, more tension means more power, and more power means further throwing distance. The spider silk employed by the Dwarves also solves the breakage problem - it is much more durable.

The Dwarves discovered that so much more energy could be stored in the spider-silk ropes that they needed to replace the typically wooden throwing arm with one of tempered steel. The "stop bar" that limits the arm's forward motion also needed to be steel instead of wood. Before making this change, their catapults were shattering when the throwing arm impacted the stop bar.

The Seafarers are using these latest improvements to once again reshape the way the world works - this time, though, by mastering the Sea instead of the land. With new catapults mounted on their ships, the Seafarers are able to fire upon enemy ships while still hundreds of yards out of range of the best weapons that others may be wielding.

The first three Human Corsair ships to discover this new Dwarven advantage were educated when attacking a lone Seafarer merchantman. Despite having fewer catapults than any one of the corsairs, the merchantman sunk the three before the corsairs ever got within their own firing range. After a few additional incidents like this, the entire world of Cartyrion knew that attacking a Seafarer ship was suicide.

The Seafarer Privateers are also equipped with these superior weapons. Fortunately, there are very few of these, and they are easily bought off with gold and jewels, because they have demonstrated that no number of escorting men-of-war will save a laden non-dwarven ship from plunder by the Privateers. 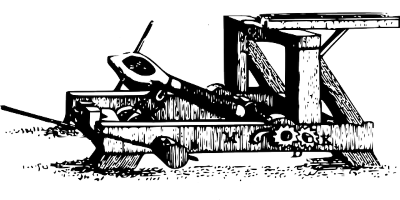 Prototype Torsion Catapult
Inventor(s)
Edillmeera Libnip, a Gnomish engineer, was credited with discovering that spider silk could be braided into ropes, and the ropes gathered and twisted for use in a catapult. She was almost killed when her first prototype fired for the first time - so much power was stored in the torsioned ropes that when the wooden throwing arm struck the stop bar, both pieces of timber exploded into a shower of splinters. Replacing them with steel members solved the problem.
Access & Availability
The secret of Cave Spider Silk ropes is very carefully guarded by the Dwarves. They have no intention of making more powerful siege engines available to other races who would use them for conquest. The Dwarves have little interest in expanding their territories above ground, and use their devices for defense. Since a Delve has never fallen since the Great Strife, the secrets of these powerful catapults have been kept. The Seafarer Captains - Merchant and Privateer alike - have taken an oath on their Clan's honor to scuttle a ship before allowing a non-Dwarf to captue one of the devices.

There are many - especially among the Pirate Lords of Korsanevi - that would give much for the secret that makes the dwarven catapults so deadly. But to this day, the secrets have remained with the Dwarves.

Catapult Image by Clker-Free-Vector-Images from Pixabay

Answering: "Write about a technology from the history of your world - is it lost to the ages, or did it shape the world today?"
Visit RPGDinosaurBob's Competition Page Check all other answers to this prompt Competition Homepage