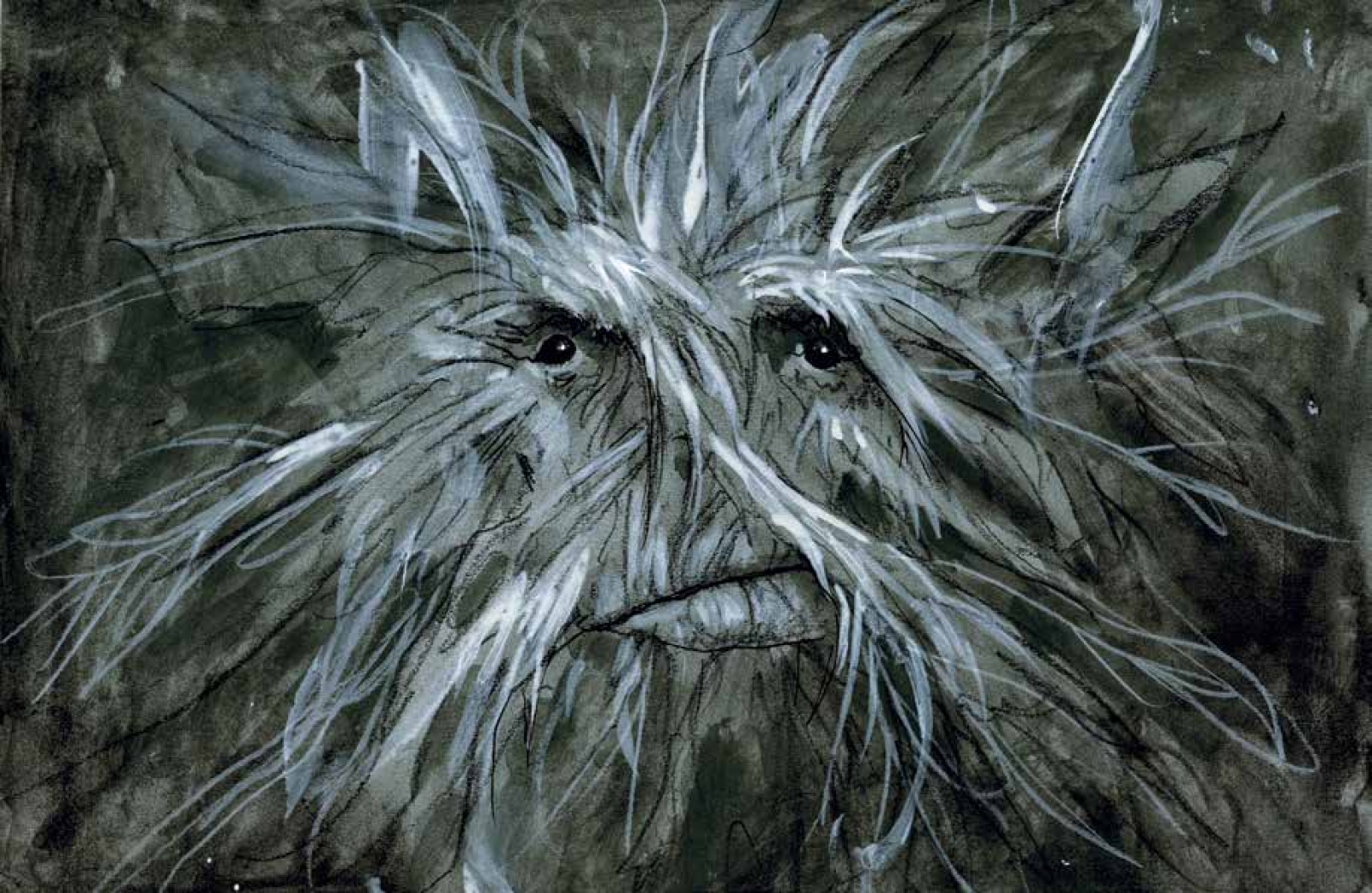 To adventure in the world of Thra you will need a brave adventurer. While the game master (GM) will set the scene and have control over much of Thra, it is up to the player characters (or PCs) to be the protagonists of our tale. To create a character, simply follow these steps.

Print out a character sheet from www.riverhorsegames.com and place it in front of you. A character sheet has a few boxes for you to fill in information and space for taking notes. We will be filling out the information throughout this chapter as we get to know your character.   The italicized text below (and throughout this page) describes an example group going through character creation.   Cath has picked up The Dark Crystal: Adventure Game from a local gaming store, and she’s had a bit of a read through the book (she can’t read this, don’t worry). She decides to gather some friends together on a Sunday afternoon to try it out. Since she has read the rules section (this bit) of the book, she feels ready to help the others making their characters. She prints off some character sheets and grabs some pencils before introducing her friends (Michael, Karen, and Susan) to the world of Thra.

Every Gelfling comes from one of the seven clans that live in the Skarith region of Thra. Read the clan descriptions on the following pages, choose one, then write it onto your character sheet under “clan.” After choosing your clan you gain your clan trait, and one other trait from those available. Each clan has their own traditions, strengths, and weaknesses that will become clear as you play the game.   Cath asks her friends what clans stand out to them after reading the descriptions out loud. Karen is quick: “Grottan!”. Michael, who had done a bit of reading beforehand decides on Sifa. Finally Susan asks for the book so she can give the descriptions a read through, settling on Stonewood. Each of them decides which unique trait they want to have, and write down both that trait and the clan trait on their character sheet.

The Drenchen clan are proud hunters, famed for their ability to breathe underwater and swim with the swiftness of a Ruswha, though the females of this clan cannot fly. With limited exposure to the other clans, the Drenchen have a reputation for being rude and uncultured, but the truth is a Drenchen values honesty and the truth before politeness. 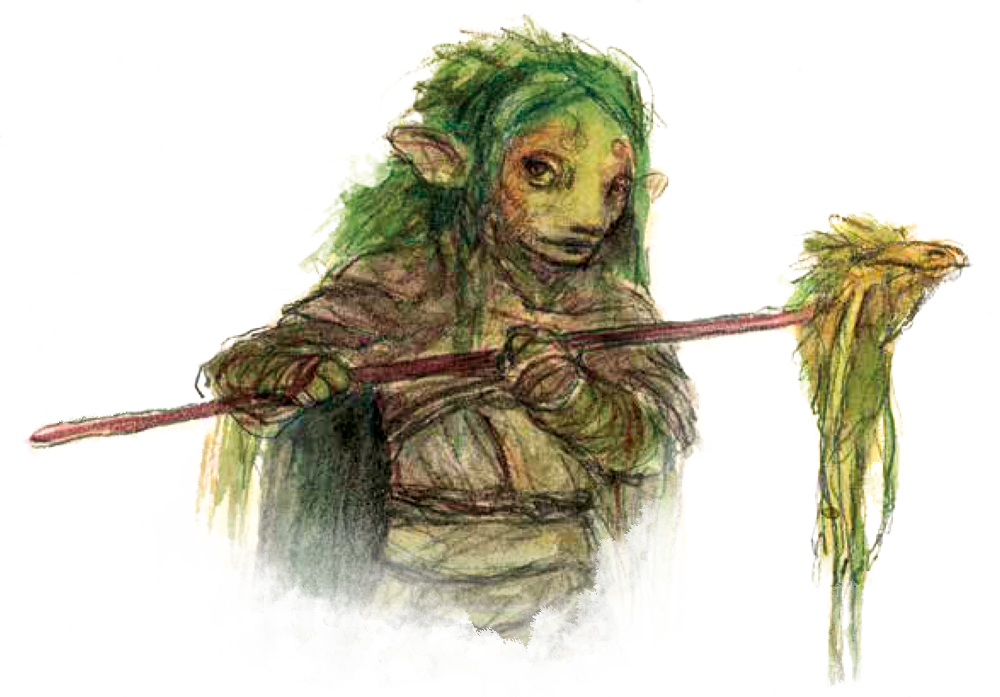 Drenchen: You can breathe underwater, and tests related to the swamps are improved.

Healing Touch: Once a day, heal with a touch, rather than during a rest (page 31). Vliyaya.

Finwings: You can swim as fast as a Landstrider can run, which is pretty fast.

The Dousan are a spiritual clan of nomads who decorate their bodies with tattoos and place great importance on acknowledging the passage of time and the inevitability of death. As such, they often dismiss other clans as materialistic and facetious. They see little point in unnecessary conversation, preferring silence and stillness. 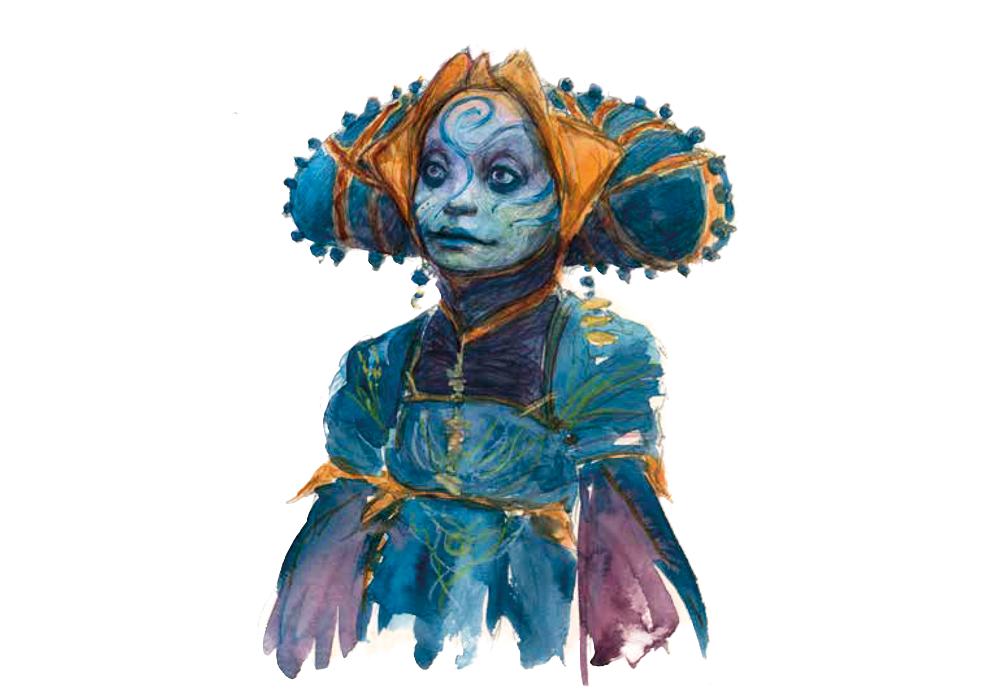 Dousan: You can always find water, and tests related to the desert are improved.

Accept Death: When damaged, add +1 to your Fighting rolls.   Trance: Once a day you can commune with Thra, gaining insight into the history of an item.   Dream-etched Tattoos: You are protected from Vliyaya effects; rolls to resist them are improved.

Very few Gelfling are aware of the Grottan’s existence, believing that they were extinct. The Caves of Grot are a twisting network of tunnels, home to countless creatures and fungi. Recently the caves have been cursed by a terrible spreading blight known as the Darkening, forcing the clan to come to the surface and integrate with the surface-Gelfling. 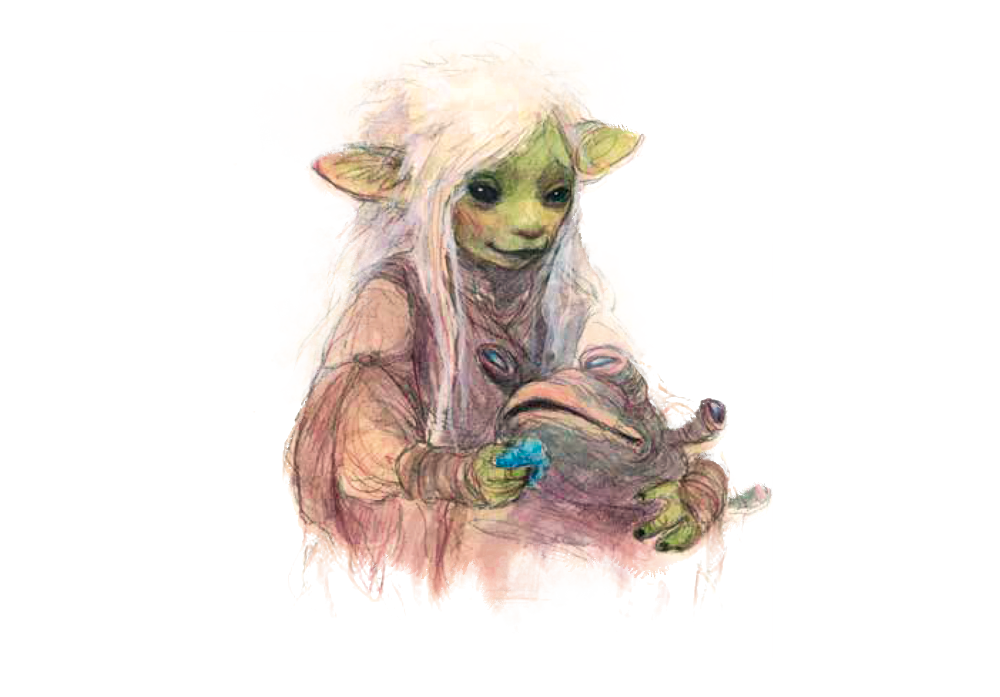 Grottan: You can see perfectly in the dark, and tests related to caves are improved.

Finger Talk: You can tap on hard surfaces to send messages to anyone touching that surface.   Alchemy: During a rest you can make herbs into potions to double their duration or effect.   Shrouding: You can extinguish the light from one light source within a short distance. Vliyaya.

The Sifa are known for being as gregarious as they are mysterious. Though their home is in the villages across the coast of the Silver Sea, Sifas can be found all across Skarith as sailors, Mystics, and scoundrels. This has given them a reputation as untrustworthy, as many Sifas enjoy outwitting their slow-talking cousins. 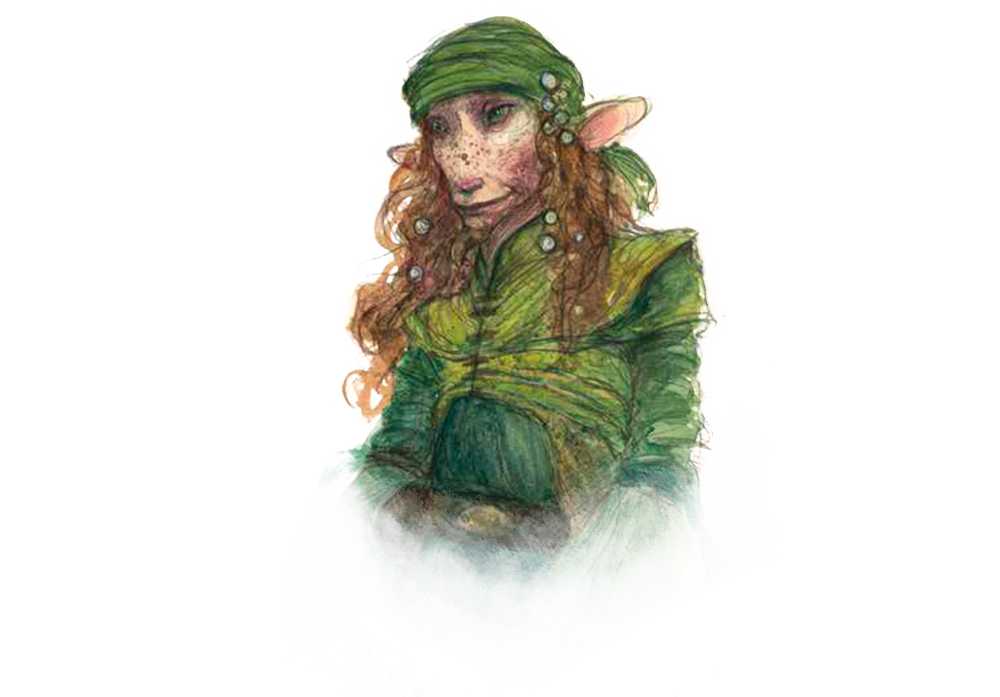 Sifa: You can foretell tomorrow’s weather, and tests related to seafaring are improved.

Prophetic warning: Once per day allow a Gelfling to reroll a die they just rolled. Vliyaya.   Signs and Symbols: Tests to decipher ancient writing are improved.   Sailor: Travel by boat for you and your allies is free, as you make yourself useful.

A populous and widespread clan, the Spriton pride themselves on agriculture and simple values. Their skill at crafting and taming animals is in great demand across Skarith, allowing them to enjoy a powerful trading empire. They are quick to share. You can always rely on a Spriton to open their hearth and homes to travelers. 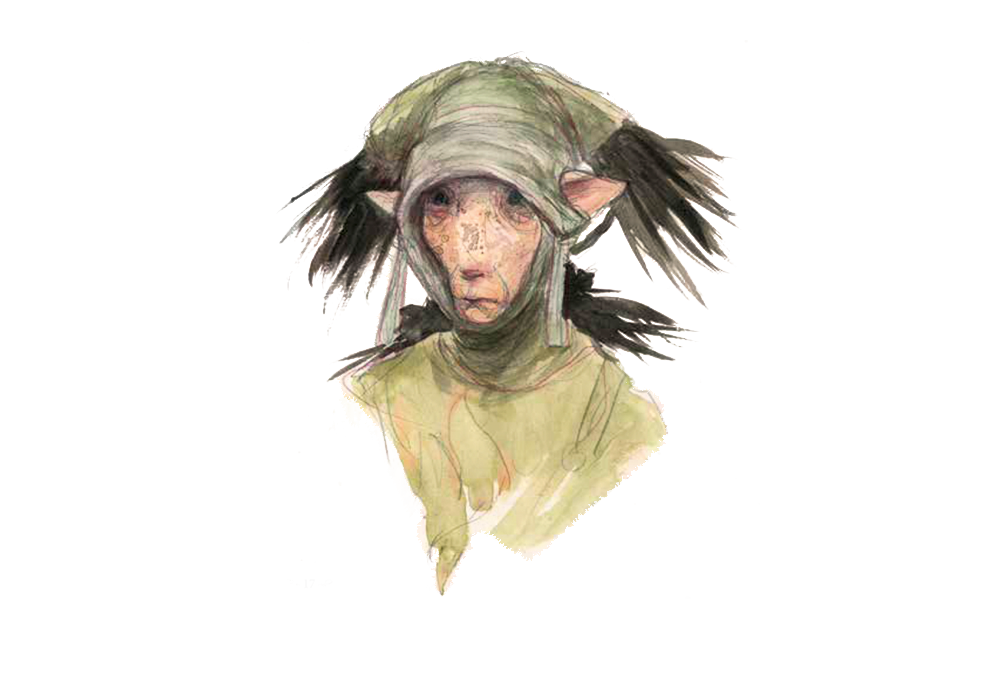 Spriton: You can speak the Podling tongue, and tests related to plains are improved.

Animal Tongue: You can make yourself understood by the animals of Thra. Vliyaya.   Greenfingers: After harvesting an herb, it gains +1 uses.   Careful packing: You can carry one extra piece of gear (heavy or not) without any penalty.

The Stonewood clan were commonly employed as guards at the Crystal Castle, but as soon as the evils of the Skeksis were revealed, they were among the first to rebel. No one can deny that the clan creates some of the most dedicated and fierce warriors in all of Thra. Stonewood Gelfling value bravery and action, despising duplicity in all its forms. 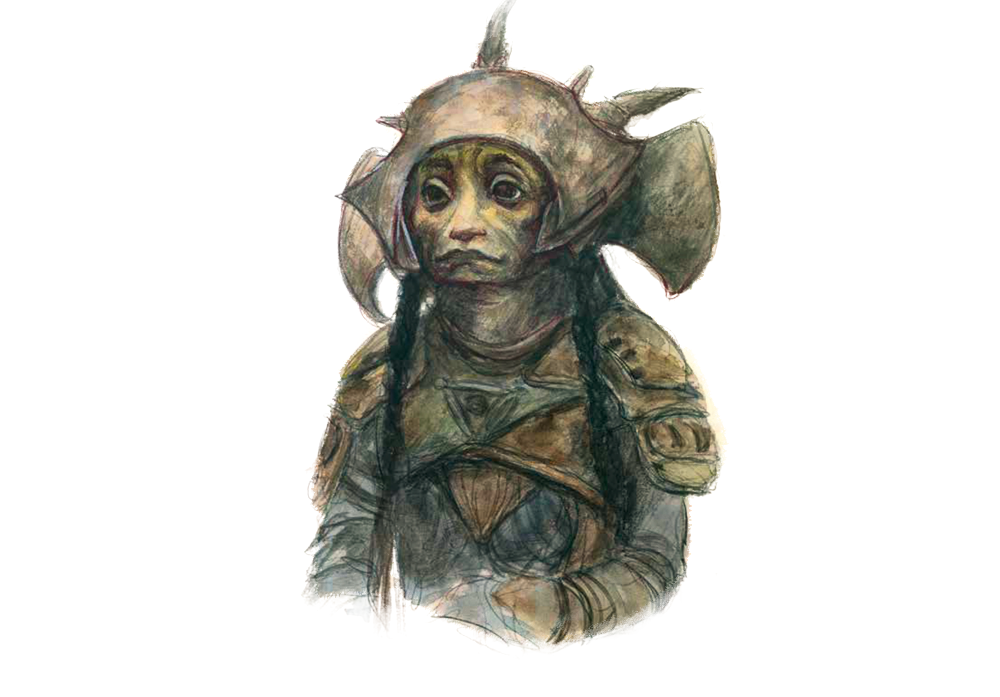 Stonewood: You start with a simple weapon (page 257), and tests related to forests are improved.

Living Weapon: Unarmed Fighting tests are not hindered.   Unparalleled Fighter: When you draw in a fighting challenge, deal one damage to your enemy.   Fated Warrior: By concentrating for a minute, you sense any legendary gear nearby. Vliyaya.

The most prosperous of the clans, the Vapra are very proud of their cultural and intellectual pursuits. Most Vapra can read and many learn to smith metal, create art, or play music. This focus on the arts and their prized position during the Skeksis rule has led other clans to think of the Vapra as haughty and work-shy. 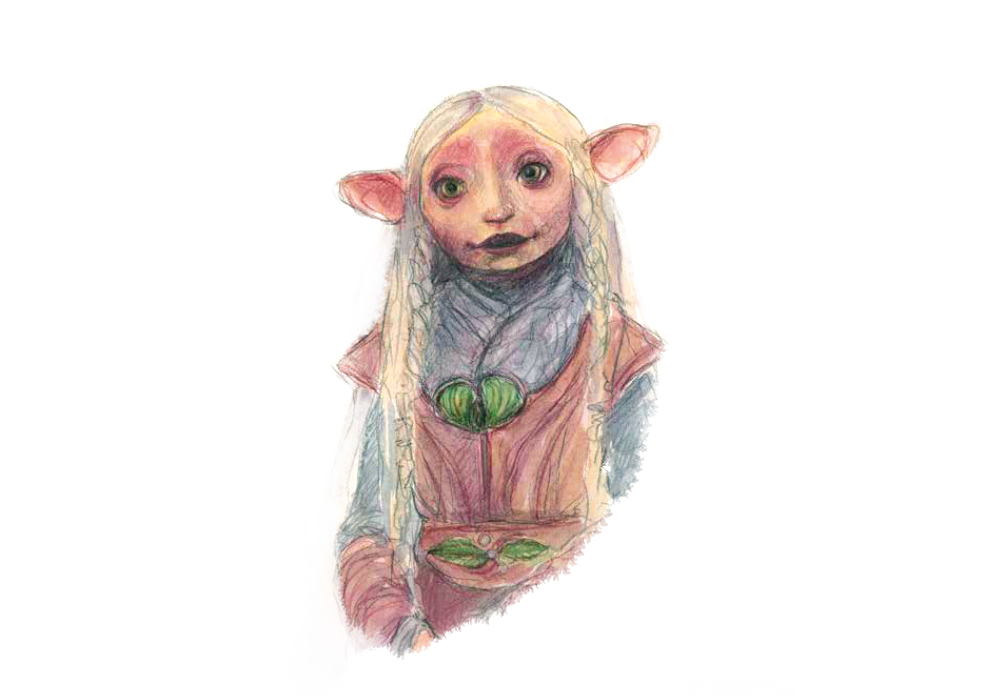 Vapra: Tests related to Skeksis or mountains are improved.

Wealth: Gain three gems. These have no use, but are highly prized by Gelfling traders.   Metalworking: You can improve a metal item once per item, giving it +1 durability.   Skilled Flyer: You fly higher and faster than others; tests related to flying are improved.

You are quick to react, good at keeping your balance, and able to run at high speed.

You can calm mounts, tame wild beasts, and intuit an animal’s intentions.

You are able to use swords, axes, spears, and bows to defeat monsters.

You are very knowledgeable on a variety of subjects, from healing to ancient scripts.

You are powerfully built, able to stand when others would fall, and lift great weights.

You have dexterous fingers and a sharp eye, suitable for all manner of larcenous pursuits.

You have a strong sense of empathy, a silver tongue, and a gift for the gab.

Next, choose your Gelfling’s flaw from the list below and write it under “flaws” on your character sheet. If none of the flaws below feel quite right, feel free to make up your own. Flaws make your Gelfling more unique, and confronting your flaws is one of the ways Gelfling grow.   Getting into it, Cath lists out the flaws. Susan thinks it would be interesting if her Stonewood warrior were a coward (perhaps that is why they prefer the bow?) and Michael chooses greedy for his pirate Sifa. Karen doesn’t feel like any of the flaws here seem quite right, she remembers that the Grottan have recently been pushed out of their caves by the Darkening so decides her character has been infected by a blight, and is looking for a cure.

Step 5: Bringing it together

Fill out the final information box with your character’s name. This is a good time to think about what your character looks like, how they act, and what their goals might be above and beyond saving Thra from the Skeksis. If you want your character to be connected to another character, this would be a good time to discuss that (perhaps two of you are childhood friends or bitter rivals). Don’t feel like you need to know everything about how your character acts and sounds at this point. Some players like to work out their backstories ahead of time, but others like to keep things a little more vague, deciding as they play how their character interacts with the world. You now have a character ready to begin their adventure. Feel free to go back to any stage and change the decisions you made. After you have all decided on your characters, the GM may want to take some notes in the notes section of the GM sheet.   The players talk about their characters and Michael, who is pretty good at drawing, decides to make a portrait of everyone. Niko the Grottan, Tarlac the Sifa, and Ortha of clan Stonewood. Susan decides at the last minute that she would rather her Gelfling learn to fight during the adventure, so changes her Fighting skill to Agility, with a specialization in Athletics (good for running away).

The first scene of the game takes place in the Mystic Valley, to the north of the Spriton plains. Each of your characters has traveled to the valley at the behest of a prophecy they may or may not be aware of. Choose how your character was summoned from the list below (you can roll a D12 if you get stuck!) or come up with your own reason and write it under the notes section of your character sheet.   The players roll on the summons list below to get some ideas. Michael rolls a 2 and thinks that the theme of a lost wanderer fits his aimless pirate very well. Susan rolls a 7, but instead chooses option 5, thinking that her character would be the sort to search for allies in preference to going to war. Karen rolls but doesn’t even look at the die before choosing option 4.

You are now ready to play!