Home » Heroes » Anatolioi
As seen in Rage! (Iliad I)

Hippodámeia Briseis is a common-born girl who had the misfortune of being in Cilician Thebe for the Festival of Artemis when that city was raided by the Achaeans toward the end of the 9th year of the Trojan War. Claiming to be of royal blood in the hopes of getting better treatment, Briseis found herself enslaved and portioned out to Achilles as his personal trophy.   But just as she settled into this new routine, Briseis found herself caught in the middle of a power-play between Achilles and Agamemnon that threatened to tear the invading army apart. With freedom beyond her hopes, her only imperative became survival. 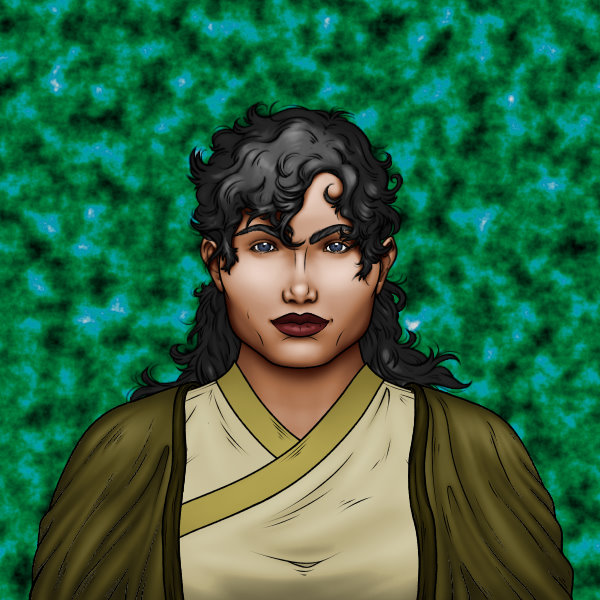 Briseis is not physically described by Homer, but was imagined by 12th Century Byzantine poet John Tzetzes:

"Tall and white, her hair was black and curly, she had beautiful breasts and cheeks and nose. She was, also, well -behaved. Her smile was bright, her eyebrows big."
— John Tzetzes: Antehomerica 356-538

Hippodámeia Briseis, like many of the enslaved women of the Achaean camp, seldom talks about her previous life. She will sometimes claim to have been married to Mynes, a son of the King of Lyrnessus, but this is almost certainly a fabrication. Since the royal family of Lyrnessus was known to have been wiped out by a previous Achaean raid, the ruse is unlikely to ever be proven false. All that's known for sure about Briseis's past is that her father's name is Briseus, and that he is apparently in no position to purchase his daughter's freedom with a ransom.

Despite the setbacks in her life, Briseis manages to maintain her sense of optimism. She finds Achilles to be enigmatic. He's ferocious and merciless on the battlefield, but also sensitive and caring in private. Briseis, good at reading people, has reason to fear being passed along to Agamemnon, but is determined to make the best of her situation.

2. "To the Victor Go the Spoils" in Rage! (Iliad I)
Captured along with Chryseis in an Achaean raiding party on Cilician Thebe, Briseis meets Achilles for the first time.   7. "The Routine" in Rage! (Iliad I)
Briseis settles into her new life as an enslaved camp woman, along with the special demands of belonging to Achilles. But that routine is about to change...

Ultimate fate
She mourns for Achilles upon his death, gets passed around the camp, and ultimately becomes the property of Neoptolemus, about whom she has mixed feelings.

In medieval romances, starting with the Roman de Troie, Briseis becomes Briseida, and is the daughter of Calchas. She loves and is loved by Troilus and then Diomedes. She is later confused with Chryseis and it is under variations of that name that the character is developed further, becoming Shakespeare's Cressida. Briseis is absolutely central to Homer's Iliad, but gets so little to do or say in the original version. I'm hoping to give her more of an active role and voice.   How do you think I did in developing this character? Let me know in the comments!
Please Login in order to comment!
Powered by World Anvil