The skirmish-class medical tent was imperative for any and all large-scale campaigns across the Elven territories of Midgard. The lightweight beam and canvas construction made it incredibly portable for camps on the move. When in use, the standard-issue muffling enchantment made the exterior sounds of war seem quite distant while recuperating soldiers rested.
Though these tents were only large enough to hold around fifteen injured warriors at a time, more than one was rarely required for the Elven skirmishes. Clashes between Seelie and Unseelie Elves could escalate into chaotic forays of violence and mayhem at times, but never lead to fatalities. Elves do not kill elves. It was their most sacred law, necessary for keeping the peace of The Accords.
This agreement between warring courts (and the Elvish houses within) kept them sharp in the ways of battle, and ensured they were potentially the most numerous homogeneous Faefolk species. Still, medical tents were important during skirmishes, as the fights were very real. Though directly fatal wounds were to be avoided, battles could lead to Elvish soldiers being grievously wounded. Injured soldiers were taken from the battlefield for immediate healing.
Capturing enemy soldiers was a key component of skirmishes. Inter-house negotiations used prisoners of war as leverage in for goods, resources, and other concessions at the cessation of battle. Capturing a commander usually resulted in an immediate end to the skirmish, with favorable results. Injuring the enemy was the easiest method of capture, and medical tents were crucial for keeping prisoners healthy.
The tents were staffed with medics who magically stabilized wounds, be they of friend or foe, then sent patients back to the capitol with the next teleportation group. If the wounds were light enough, medics could heal them in a matter of minutes; some soldiers even felt capable of returning to the front lines1.
Lothrûbio2 was well known for his tenacity. Even when Jadàmor3 attacked him, he usually found his way back to the battle. Still, her famed ambushes often sent him straight to the medical tents, usually with a jade dagger embedded in the top of his foot. 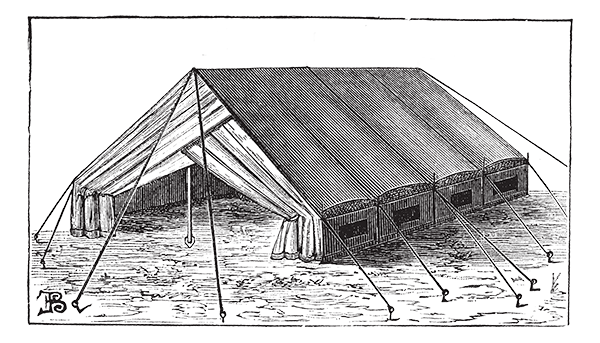 1oldiers returning to fight was against honorary protocol, except in the case of commanders, who stayed until the skirmish was over
2Crown Prince, House Anhrubime, Seelie Court
3Crown Princess, House Carjalen, Unseelie Court

Answering: "a building associated with healing the sick"
Visit The Bard♫'s Competition Page Check all other answers to this prompt Competition Homepage