Many items of the uniform are tailor-made for each unique member. For those who are Dragons the uniforms are made with Dragon fabric. For the other members the fabrics are made out of the most illustrious materials; Zusriz silk, Mador fake leather, Kokori cotton, and Kokori metal. These materials are of the highest available quality to protect the wearer.

The outfit consists of thin pants and shirt made out of a dark purple or navy Zusriz silk and Kokori cotton mix. Mador fake leather shoulderpads, chestplate, belts, chaps, boots, a backpack and pouches. Like all members of Houses & Orders the members of The House of Adventurers wear their golden House badge on their chest.   All members have custom boots made out of fake leather. For example August the founder of the house have long thick boots with knee protection while Zamarca have thin thigh high boots without knee protection and Azalin have boots that end in the middle of his calf and a pair of separate knee pads.   The backpacks are made out of brown mador fake leather and belt buckles of kokori metal. The backpacks are custom made for each member. The backpacks for the dragons in the group are around 2 meter long with a diameter of 30cm. The other backpacks are around 50cm tall, 35cm wide and 20 cm thick.

In the beinning of 1260RO when August and Zamarca started the House they only used their private clothes when they were out adventuring. August had created the House as a safe haven for the two of them after all.   After 1263RO when the House had started gathering fame, more members forced their way into the House Zamarca decided that they needed a consistent uniform, especially when they branched out what they were doing from only adventuring. This was because they had started to interact with other Houses, Orders and people who didn't know them personally and the uniform gave the members not only another layer of physical protection but also a layer of social protection.   Zamarca worked with The Koring House to design and create the uniforms. 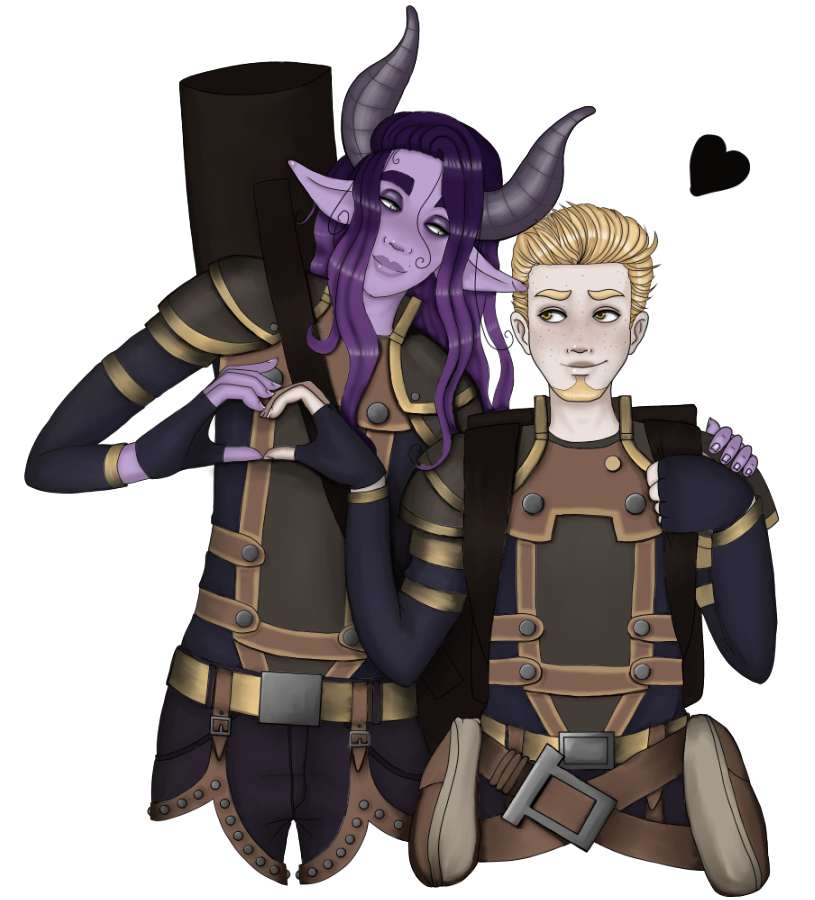 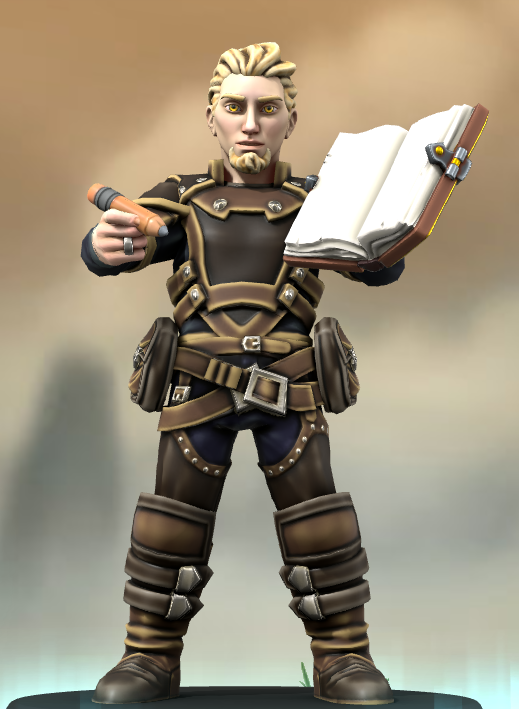 Older August made on HeroForge 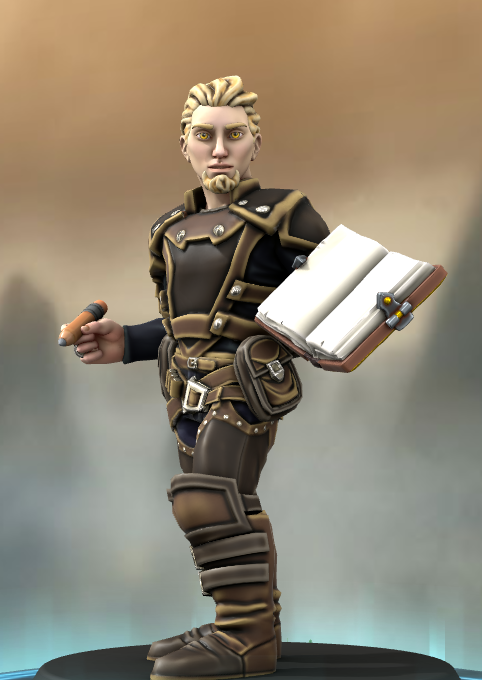 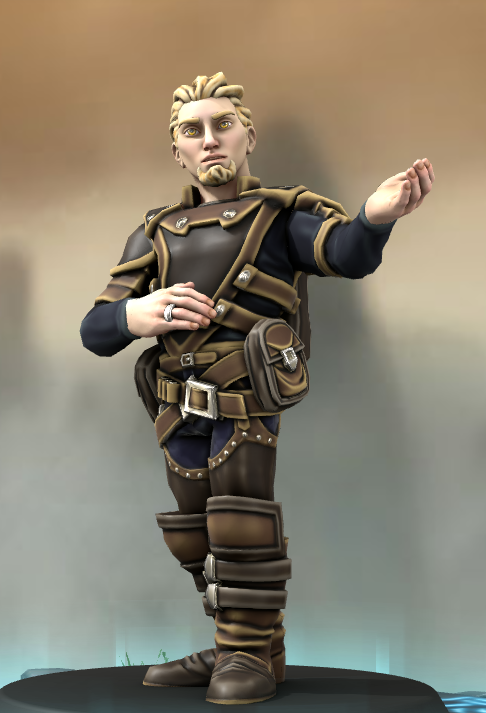 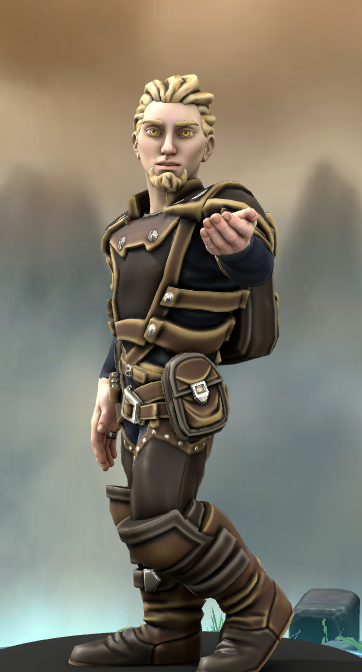 All art & content © BasicDragon 2020-2021, if nothing else is stated.
You may NOT use my content for commercial purposes. With credit to me and a link to this site, you are allowed to share and adapt my content.
Article template
Item
World
Idyll
Category
Misc.
Author
BasicDragon
Publication Date
24 May, 2021
Creation Date
6 May, 2021
Last Update Date
27 May, 2021
Visibility
Public
Views
484
Favorites
14
Comments
5
Work In Progress
Tags
outfit uniform

Great article and nice illustration :D   I'm wondering about the new materials you've invented. Are they just like real world equivalent but with another origin? How do they make the fake leather and what advantage does it have over real leather?   Since you mentioned that they are using the best materials available, I'm guessing that they have a lot of money to pay for that. Is it the guild who pays for the outfits or the individuals?

Thank you :) <3   Zusriz silk is spun by Bugfolk from the Zusriz ethnicity. It's a very sought after material because of one family that are exceptional spinners. Kokori cotton is crafted from the same family from cotton farmed in the Kokori village. (it's close to Korda, which is where the family lives) The metal ore is mined from the same area. Several years ago a human Other who was vegan fell in love with a leatherworker. They had some problems but with the help of a dragon they managed to create fake leather.   I'm working on the article for the House but I won't make it public until I've written the first draft of the second book. XD;; The House is paying for it :)

Nice article! I like the inclusion of a history section, and I really enjoyed learning about the House of Adventurers despite there being no section about them, nicely done!

Thank you! :3 Yeah, they are getting their own article so I didn't feel like giving them their own section so I sprinkled the information around. :)

Good article! It was funny to begin the article with a quote like that xp I also like how you made such a well made drawing based off the heroforge minis :o The item uses some pretty neat materials, especially the dragon fabric which makes the clothes remain intact.

Heh, well. The heroforge mini was based on one of my characters for a novel, but a bit older. :) August. (The other one is Zamarca ) so it was easy XD Yep, since I didn't feel like spending my novels describing how my dragon characters clothes themselves after transforming I needed a material for them that could change together with them. So I figured they would have to make the material out of their own scales. :)

Nice job with all the images! I'd love to know more about the "social protection" this uniform provided. Did it offer them respect? Or even deference?

Thank you! Hmm, it depends on when. XD; The House of Adventurers and it's growth is a main part of my novel series so I can't really give out too much information.   If you are an adult and aren't in a House you usually have to pay a lot more for stuff and people won't respect you. So just wearing a uniform of a recognized House gives you the normal respect of another adult. ( Pledgeless )

I left a like but not a comment? That's unlike me. Anyway, great work here BD! Among the little details I really liked was the content of that spoiler near the beginning. ❤️