We rushed to the nearest cave to escape the approaching storm. Spotting an enticing glitter from within I led the team deeper into the cavern. Upon lighting the torches we beheld the most surprising discovery of our time...
— Explorer's Log

The Jyllaru Bone Caves are scattered about Jyllaru Island. Some contain treasures, some only dragon bones, and all hold an ancient mystery. What happened on Jyllaru to kill the dragons of the island, and why have none returned to reclaim it?

Since the discovery of dragon bones within the dragon-less caves of Jyllaru Island imaginations have run rampant as to their origins.   The island hosts a vast quantities of bones and a variety of differently sized dragon skeletons spread throughout multiple cave systems. All dragon skeletons appear to be complete. Dragon hoards of varying sizes and types are spread throughout the caverns as well, both with and without bones.   As a result many speculate that the island was once home to a society of dragons before disaster struck, claiming old and young alike. The remains do not bear the signs of volcanic activity or physical violence and therefore magic is the favored explanation. This event must have been disastrous by dragon standards as none have returned to reclaim the island or its treasure.   As to why this event occurred or who may be responsible, no discovery thus far points to an answer. An expedition led by Rolph Duval attempted to speak with the dead and use necromancy to obtain this information directly from one of the dragons. Their bodies were found by a later expedition, faces frozen in pain and fear. Attempts to recover their charred remains resulted in their bodies crumbling to ash and dust.   No further attempts were made to replicate their efforts. The dead clearly wished to remain dead.

Explorers to Jyllaru Island discovered a cave full of dragon bones when seeking shelter for the night. The Society of Scientific Exploration and Discovery sent additional expeditions, discovering many other large natural cave systems full of bones as well as signs the caves were once inhabited by the now-absent dragons.   The SSED has since claimed the uninhabited island as an archeological site. Dragons continue to avoid the island, not even attempting to defend the cave system's contents from excavation or study, leading researchers to hypothesize the island may be the site of a horrific massacre in draconic history.   The dragons have refused to answer requests for information. "Let the dead remain dead" stands as the only response received by those who have survived their quests to ask.

Tales of the Jyllaru Bone Caves are common among scientists or those with an interest in dragons.

In some speculations Jyllaru Island was a sacred burial site and the treasures interred with the dead as a sign of respect. This would align with the absence of living dragons on the island but then why do the dragons not defend the island from the Society of Scientific Exploration and Discovery's excavations?   The Goldaming Family insists that the magic involved in the event was Ancient Magic, and hopes to discover the lost art through the archeological expeditions on the island.   Others claim it was a now-extinct ethnicity of Feral Dragon or perhaps even a colony of adolescents of the larger Ancient Dragon. While the surviving treasures hoarded within the caverns differ from dragon hoards today this could be due to ethnical differences, personal tastes, or simply the items available for hoarding at the time.   One thing is certain. The bones and treasures are all tens of thousands of years old, and have remained relatively undisturbed until their relatively recent discovery.

Inhabitants of Lokira point to Jyllaru Island as a defense against Dragons and a possible reason why the cunning beasts are present on their continent in much smaller numbers than the rest of Fillimet by comparison.   To the rest of Fillimet the tales of the Jyllaru Bone Caves and the SSED' s efforts to unlock their secrets are more of a curiosity, a variation on discussing the weather among intellectuals. Telling someone their answer is in the Jyllaru Bone Caves has become another way of saying that they may never learn the answer.

The Society of Scientific Exploration and Discovery views the site as key in their research of dragons. Their quest for answers results in multiple simultaneous expeditions every year. Magical and scientific methods are utilized freely depending upon the purpose and leadership of the expedition. Speaking to the dead and necromancy have not been attempted since the tragic discovery of Rolph Duval's expedition.   In addition to identifying the history of the Jyllaru Bone Caves, the SSED strives to understand the history of the dragons who lived there. A largely undisturbed collection of dragon treasure hoards tens of thousands of years old provides an unparalleled opportunity to study dragon culture and history.   This also provides a significant incentive for looters, requiring the SSED to remain ever vigilant. They have therefore reached out to the Goldamings of Arcana to assist in defending the amazing find, in exchange for full access to any magical discoveries within the caves.

The Goldaming Family has held several different hypothesis although the most popular claims that Ancient Magic was involved. The Goldamings are therefore particularly interested in the findings of the Society of Scientific Exploration and Discovery and periodically send their own expeditions as well, in addition to assisting the SSED with the security of the island.

Multiple field reports and first hand accounts detailing discoveries, excavations, and experiments exist within the archives of the Society of Scientific Exploration and Discovery, the Fillimet Magical Archives, and the Great Library of the Goldaming Family.   Speculations on various causes and reasons for the Jyllaru Bone Caves and the lack of dragons on Jyllaru Island are also popular in fiction, and the occasional cult will utilize the tales to further their own agendas. 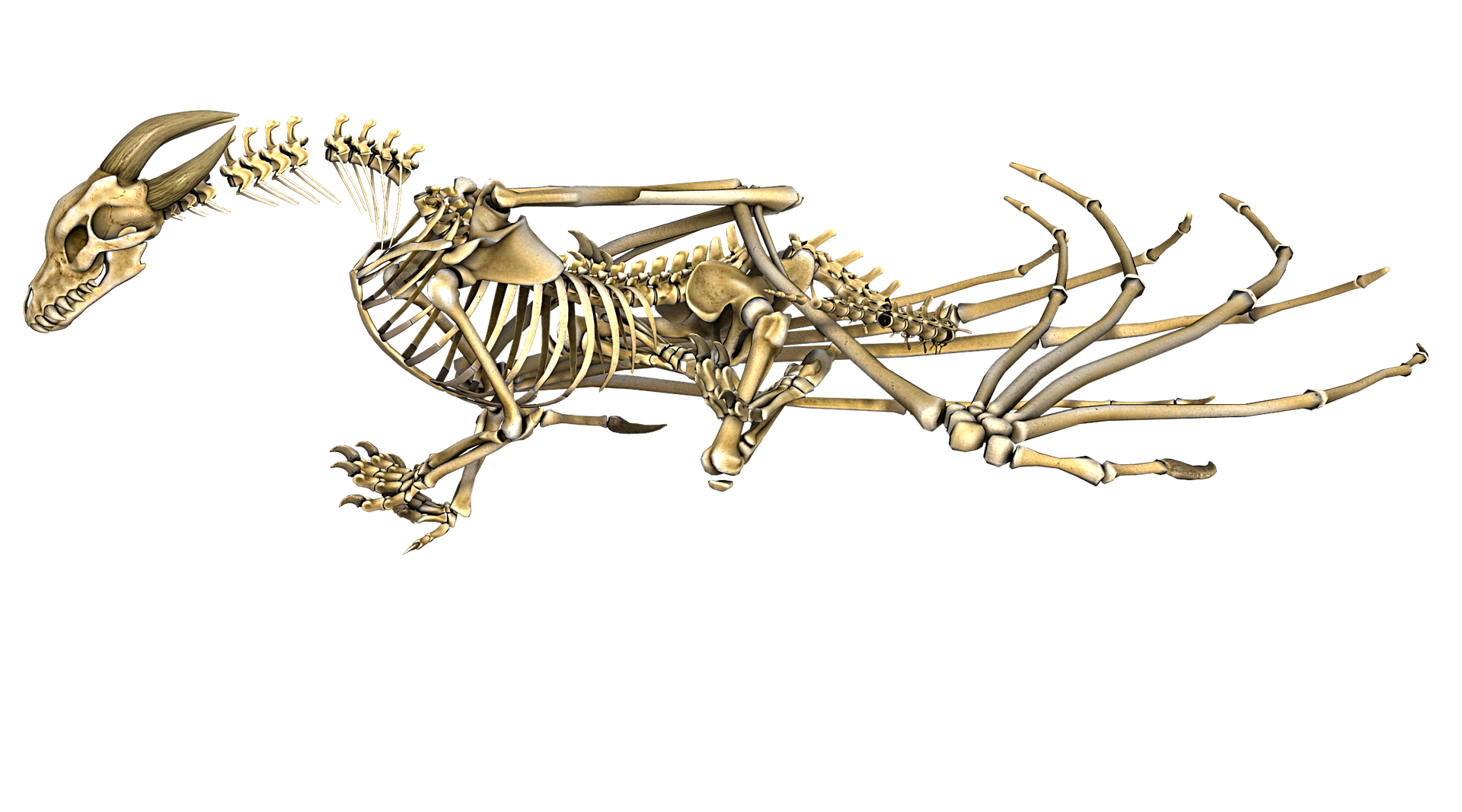 Jyllaru is the large yet strangely abandoned island within the contient of Lokira. No large animals call Jyllaru home, and even the Feral Dragons keep their distance, although large collections of dragon bones have been discovered throughout its caves.

The feral dragon is a cunning sentient creature, capable of reason and well-versed in the manipulation of others for the dragon's personal gain. The term feral applies solely to the species' demeanor towards other sentient life.

The Society of Scientific Exploration and Discovery is devoted to the ideals of preservation, conservation, and understanding of the planes and creatures of Fillimet.

The Goldaming family is the ruling family of Arcana, and also the only tax-paying citizens of the nation. They are an open-minded and multicultural family, spending their time pursuing magical understanding and expanding upon the uses of magic.

So this is a fairly interesting take on the prompt! i like it. Ok so first thing, id try to even out the sidebar with the body. That empty space was fighting for my attention with this excellent article and nothing should take away from good writing! on another note, id love to see quotes from these field reports mentioned or even the theories behind the cave from people around the world. This is a really interesting concept, similar to how we are baffled by strange archaeological discoveries in the real world. Nicely done!

I will think on the quotes, that's a great idea.   Trying to work on sidebars unfortunately results in losing all my work because of the 2 year old "Playing with the letters". I know it's an eyesore and guarantees I will never win a competition here, but I can't really work it on my cell phone because I can't visualize. :/

Those two year olds, always playing with letters. I feel your pain. More than one typo has been published due to my own two year old. As far as winning, don't cut yourself short. It's still possible. I use mobile alot! Generally you want 1 paragraph for every three in the main body. You can, of course, play with it but thats generally whatni find. You can always ask others or myself to gender on a pc. Most are happy to help! No worries either way though. It's a nice article, and just an awesome idea.

Okay, okay, you convinced me. Thanks for that. :)   I took a bit of a lazy way about it, though. Article blocks take up a lot of sidebar on PC...   Thank you. (Still need to think up some quotes).

Possibly a little flash fiction piece detailing the moment of discovery? Dialogue consisting of speculation? And hey, blocks are not a bad thing lol and again its not a huge deal, I didn't wanna just not make some suggestions on improvement, but its always hard to find a way to improve a good article.

That's a real cool idea; a cold case where the victim is *dragons*. Really cool :D   Did people loot the treasures?

I love the mystery in this!