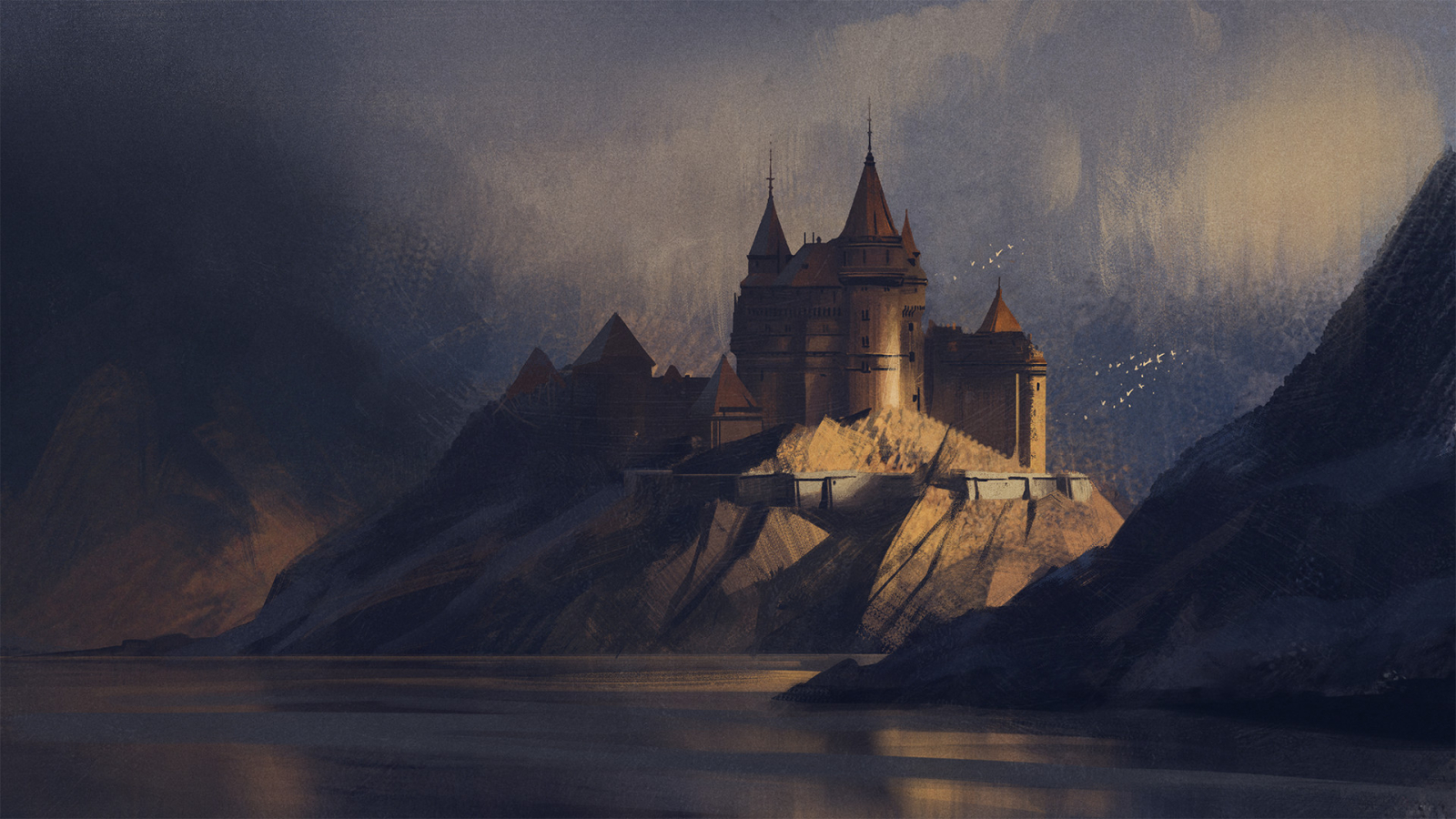 The Massacre of Castle Lenztanzen

The Massacre of Castle Lenztanzen refers to an event in 1690 CE in which the King of Thallund along with the majority of his court were murdered by an unknown force.

Castle Lenztanzen was completed in 1683 CE by renowned Grundish Architect Sieghard Von Rosenfeld after being commissioned by King Baldur II of Thallund. The castle was positioned on top of a highly defensible ridge on the north-eastern side of Rotensee lake in southern Thallund. However, despite this excellent position, the castle was not meant as a fortification, rather, the King intended it to serve as the summer-home of the Thallish court. This was evident in the design.   Though surrounded by concentric rings of walls and possessing no less than eight gate-houses, the keep of Lenztanzen was built for comfort and decadence. The main hall was built as a grand ball room with a high vaulted ceiling and a massive stained glass window open to the lake. It featured no less than 27 guest rooms, ensuring that almost the entire court could comfortably stay within the keep itself. Below the castle were a series of tunnels connecting to large well-stocked cellars, and leading further down they opened to a pier built on the lake where the King's yacht was moored. The walls of the castle were washed with white lime, causing it to gleam in the sunlight. Nearby a town had sprung up in order to house the workers during the castle's construction, now those rooms belonged to the lower ranked members of the court's entourage, those who were not fit to stay with in the castle proper.   All of this was possible due to the prosperity of the time, Thallund had an incredible run of bumper crops lasting nearly three decades, starting in 1668 CE. Much credit was given to King Baldur for this. In celebration of yet another incredible harvest he declared that 1690 CE was to be a year of celebrations, and planned a whole summer of feasting, hunting, and sailing for his court at Lenztanzen. Early in 1690 though the nation was rocked with the death of Duke Otto Von Kreuzburg. He had disappeared from a caravan that he was travelling in and was found days later in a nearby forest, stripped bare and dead. While the nation mourned, the King continued with his planning. After a large funeral held in Drachonhondel, the court set out for Lenztanzen.

The Summer of Feasts

For the next two months a grand time was had by all in attendance. Lenztanzen was lovely, the castle was decorated heavily with banners of those attending along with wreaths of sweet smelling flowers. Often time those at court could be seen up in the hall dancing throughout the night, or riding off to hunt during the day. Occasionally they would take the yacht and sail around the lake for a day. On the 4th of Fyzerus the King planned a huge banquet in celebration of his wife, Katarine's, birthday. Invitations were sent out all over the nation, and even to some from surrounding areas. Many of the common folk as well flocked to the castle, more or less a festival sprung up the week before the banquet.   The night of the 4th the moon rose high above the castle, and no one knows what happened afterwards. Those who had been in the town below the castle that night reported strange sounds emanating out an hour before midnight. Strange, discordant music echoed out from the halls. Those who attempted to enter the castle found the gates barred and locked. Slowly the laughter of those within turned to shrieks as the night wore on. Before the sun rose the next morning the shrieking stopped, the lights were snuffed, and castle Lenztanzen went silent.

In the morning the gates were found unbarred and unlocked, swinging in the light breeze. A group of guards from the town, led by Duke Mannfried Von Berlstatt, who had been enjoying the lower comforts of the town that night, entered the castle. What they found were the remnants of a nightmare. The guards along the walls had been hung from the spikes that once held wreaths and banners.   When they entered the keep they found the remains of the court. Their bodies were draped over the dance floor of the great hall, many holding each other as if they had been dancing and simply fell. The eyes of those found were blackened and burnt, their faces streaked with tears of blood, and their mouths twisted into permanent, painful smiles. The King sat in his throne at the head of the dance floor, his head, crown and all, sitting in his lap, his hands holding it. The beautiful tapestries that covered the walls had been covered with sprays of blood and torn at by some unknown force. All of the servants along with every animal in the castle had been killed, the plants in the garden had shriveled and died. Despite being in the middle of summer, and just days away from he solstice itself, those that entered found themselves chilled to the bone. They left as quickly as possible.

Luck was on the side of some that day though. The King of Grundholm, Gotthard I, was delayed by several days due to a collapsed bridge. Had he arrived on time that likely would have been his end as well. The political impact of the event cannot be understated. The deaths of the entire upper echelon of nobility caused widespread panic, and the country was rocked by civil wars over land and power for the next three decades. In the end a prince of Grundholm, Rudolph the Keen, would take the Thallish throne, beating back four separate pretenders. Under his rule the land would stabilize and finally return to peace.   Several investigations were launched after the massacre in order to determine the culprit, however every team that attempted to investigate ran into unfortunate tragedies, all of them dying in strange, unlikely ways. The folk of the town whispered that the castle was haunted, and most moved away. Five separate attempts were made to reclaim the castle, these ended much the same way as the investigations, all as failures. In 1723 CE King Rudolf IV ordered the castle to be torn down. However, after 14 deaths within the first month of work, the project was abandoned, as most workers simply refused to enter. Finally, a group of Exorcists from The Order of St. Malcolm attempted to cleanse the castle, but they too were rebuffed.

Death walks those halls. I know not what minion of the Hells inhabits that castle, but I know that I will feed no more of my men to it! We are leaving immediately, no amount of gold is worth doing what you ask of us.
— Lord-Inquisitor Kallen O'Padraigh

An official proclamation was issued in 1737 CE stating that entry to Castle Lenztanzen was forbidden, not that this proclamation was necessary. Officially its purpose was a legal abandonment of the castle, and hopefully a deterrent to those who wished to enter, as none who did came out for the better. Some folk that live nearby state that the castle has only become more haunted since then. Saying that on a clear night with a full moon you can see those that died there. Spectral guards patrolling broken walls, and ghostly nobles dancing to the shrieking music of long-dead minstrels.
Date of Setting
1690 CE

I was outside of Lenztanzen when it happened, such horrible sounds came from it. What I remember most, even more than the screams, was a single piercing sound. It followed wherever I went that night. When we tried to open the gate it grew louder, my men could hardly stand from how painful it was. I fought at the siege of Chailleuse, I directed the men who brought down the main gate. We could've opened this one too if not for that damned sound, though truth be told, I don't know what we would've done had we been successful.
— Duke Mannfried Von Berlstatt