A specialised, gargantuan caterpillar-like monstrosity bred with a singular purpose: To fuel bridging fields and portals to allow the Shadebeasts to pass the Veil to Dunia. 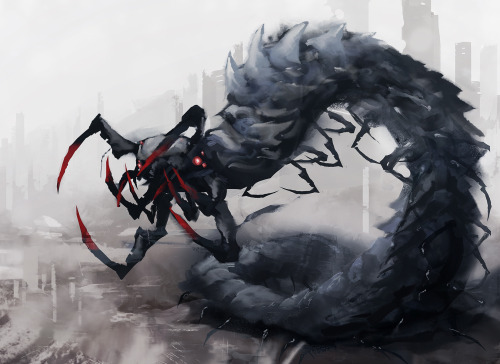 The Nexus Beast is not a common subspecies of shadebeast. It will not evolve on its own from a grub. Instead, a hatcher must deliberately introduce a genetic marker in the form of a specialised protein. This triggers a mutation in the grub and it will find a large space to cocoon itself. The Nexus Grub requires immense amounts of nutrients and several hundred workers will work tirelessly to feed the growing beast.

After somewhere around a year or a year and a half, the Nexus Beast will have grown to adult size. A gargantuan caterpillar. In spite of its monstrous appearance, the Nexus Beast isn't a very formidable fighter, being sluggish and lethargic in its movements. It is not bred for battle.

The adult specimen will find a crystal cave, and sap energy from the crystals over a period of several months, during which it is again very vulnerable. Workers and warrior drones will see to its needs and protection as it feeds off of the crystals.

Once the Nexus Beast has absorbed all the energy it's capable of, it will move to a location directed by an Overlord. Several Overlords will work in unison to link themselves to the Nexus Beast and direct its energy towards the Veil, causing up to a dozen rifts in the Veil, allowing Shadebeasts to pass into Dunia through them.

Once the portals are opened, the Nexus Beast is little more than a gigantic, organic energy storage, fuelling the portals, keeping them opened. It will maintain these portals until all of its energy is spent, at which point it will simply collapse, dead. This usually happens after only a few days, as keeping the Veil broken like this takes enormous amounts of energy.

Genetic Ancestor(s)
Lifespan
Once adult and charged, its lifespan is merely days before it burns out.
Average Height
The Nexus Beast is capable of rising its body almost 50 feet in the air.
Average Weight
Several tons
Average Length
200-400 feet

Native to the Shadow Realm, this hive-minded species is made up of a multitude of biological castes, each designed to fulfill one role or another. They are highly aggressive towards invaders of their realm and lethal in combat.

The world behind the Veil, a completely different universe filled with dangers and horror. The source of Shade, the corrupting energies used by Occultists.

A Mist Portal is either a constructed, powered by crystals, portal or a natural breach in the Veil between Dunia and the Shadow Realm. It allows passage between the worlds. For what reason you would ever want to...