Kyave Din'El (Kih-jah-veh) was a Khamadian senior officer, serving the Da'Goeva family. She's a decorated soldier with infallible loyalty and sense of duty. She has been serving as the military commander of Khamad's outpost, Nabak, on Celenia.

"I don't understand your obsession with high-heeled shoes. They're impractical, give you poor balance, you cannot run in them and they compromise your stance. Why do you insist on wearing them?"
— Kyave to her sister.

Kyave is a woman who lives and breathes duty. She is a soldier first and foremost, everything else is secondary. She is the stereotype of a vindral personified; stoic, emotionally detached, blunt and efficient. The commander is a no-nonsense, humorless, ice-queen who would never have a drink with her men or be found gambling in the tavern. In spite of this, she is greatly respected by most everyone because of her honor and achievements. Even before her promotion to commander, she was a decorated war-veteran, primarily fighting chatalan raiders on the western border of Khamad. Because of her extensive experience, she expects a lot of her subordinates and is not fond of young upstarts trying to prove themselves, or impress her.

Loyalty is important to Commander Din'El and she would rather die than betray her lord, or even fail in her duty. For this reason she distrusts mercenaries, who she believes are only loyal to coin, rather than duty.

Kyave is of average height for vindral, which belies her combat prowess. Vindral are traditionally looked down upon as soldiers because of their meager size and strength. She keeps a proud posture and walks with confidence. Her hair is bright amber and tied in a tight knot at the back of her head. No one has ever seen her out of uniform, although there are those who claim they have, but even at banquets among the nobility, she still wears her well-worn soldier garb. Despite her lack of interest in everything fancy or romantic, she is a beautiful woman, blessed with rare alabaster skin. Alabaster white skin is a rare, but sought-after, condition among vindral, and it contrasts beautifully with their azure blue-within-blue eyes.

Commander Kyave is an exceptionally skilled melee fighter, both in single combat and on the battlefield. She is an accomplished tactician with several years of successful service in the homeland. Her family trained her, starting at an early age, like tradition demands. The Din'El family leans on the traditional side of honor and combat, reminiscent of Irdárian values and her training was not neglected. They pressured her to get into military service and she gladly pursued that career.

She first served as a city-guard in Brugh under the duke K'pal Da'Goeva. She was hired by recommendation and moved out from her family home at age 13 to serve the duke and did so flawlessly. Kyave excelled at her duties and after several years of service, she was promoted to Commander of Nabak and moved to Celenia to continue her service.

The only one she would consider her friend is Lieutenant Marek Tyving, her assistant.

Commander Din'el was slain in battle, defending Nabak from the 529 invasion of Shadebeasts. She commanded the Nabakian militia and successfully pushed the shadebeasts back through their Mist Portal and held bravely against the hordes in the crystal cavern, but was eventually overrun and killed.

She was memorialized with an alabaster statue on the town square in Nabak in 531.

The Da'Goeva family, headed by K'pal Da'Goeva, is a powerful Khamadian noble family from Brugh. They're especially notable for having a family member be the governor of the Khamadian outpost Nabak on the new continent Celenia. 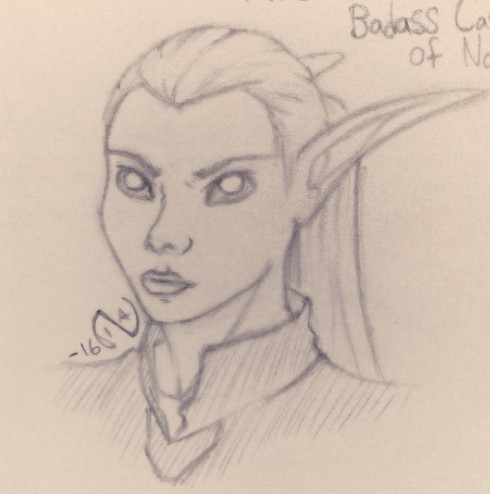 Kyave is a stoic ice-queen with a no-nonsense attitude. She is fiercly loyal and spends all her time at work. Her job is her life.

That opening quote does so much to establish the kind of character we're dealing with here. Usually when I read character articles, it can often miss the overall outlook of the character. I can read so much about their general traits and their history and still feel like I have no idea who they are. I make this mistake too, come to think of it. XD   That quote is my favorite part of the article. I love the details of her history, of her sense of duty and loyalty and rise from a city guard, but that quote about the practicality of high heels really let's me know who she is. She's practical, yes, but distant and cold. It could be her way of showing concern or care for family since it's to her sister and she seems deeply concerned about the heels. It could be the only way she knows how to express that she cares. Lots of potential character depth from a single piece of dialogue. Then again I could be looking into it too deep, but that's the fun of reading for me well done as always!

Nah, you're pretty on point ;)

I love the quote at the beginning of the article - it really gives you a feel for who Kyave is. I also really like the detail that she distrusts mercenaries because of how much she values loyalty. I would definitely want her on my side. :D