Dedziin (Didzn) is the "capital" of the mountain realms of Næka. The mountain realms are much less a unified nation and more a series of tribal territories. Most nækan tribes acknowledge and respect the Khachin's authority and participate in electing him. However, due to Hakr'Næka's extremely inhospitable and difficult terrain, keeping a unified nation is impossible.   Regardless, Deziin is the heart of the nation, such as it is. All the chieftains of the scattered Nækan tribes regularly visit the capital at least annually to discuss issues with other chieftains and with the Khachin himself. 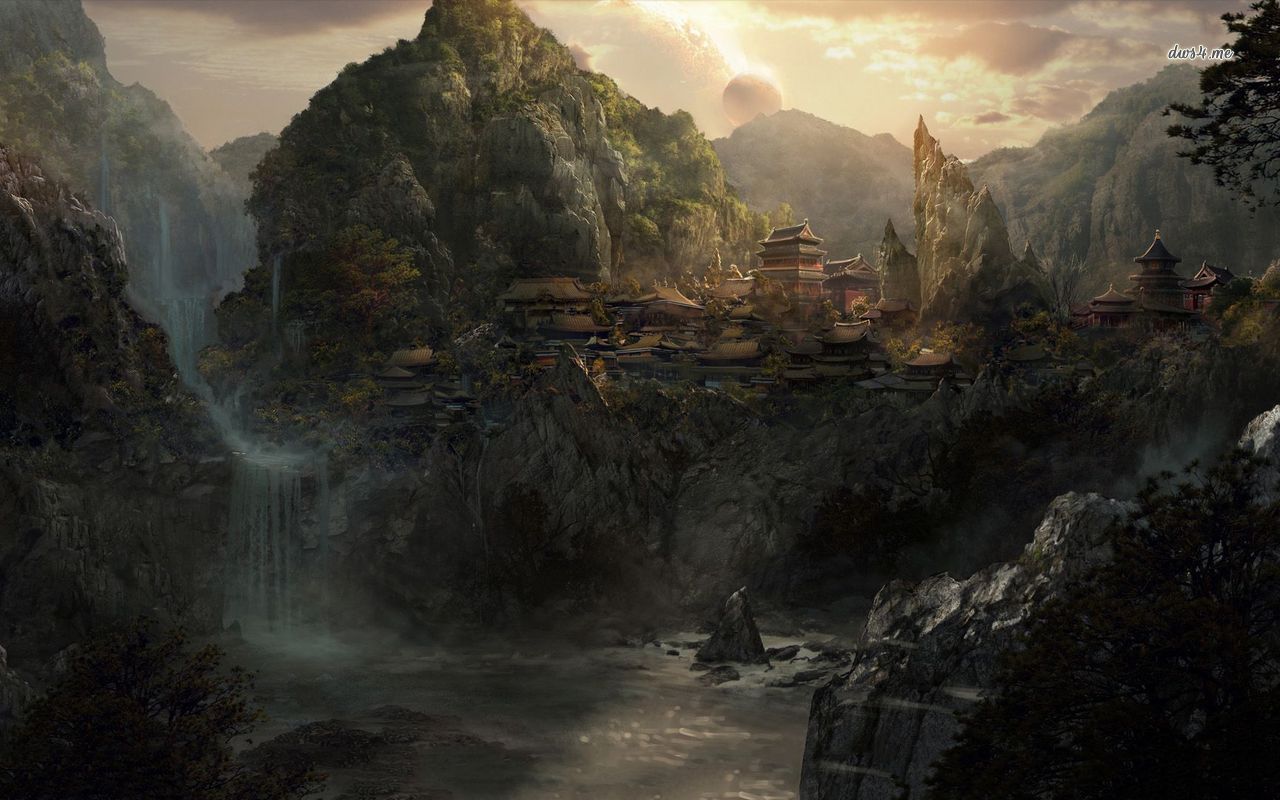 Dedziin is more of a village than a city, with a few official buildings but otherwise scattered homes of the city-dwellers. Owing to the nomadic lifestyle of the Nækan tribes, there are not a lot of people living in one place for any extended amount of time. The city is more an administrative center that imports almost everything from the tribes. Many of the tribes come here to barter their wares, usually pelts and food. The city-dwellers are willing to pay handsomely for the goods, as the city has barely any food production of its own. Water is readily available in from the many mountain streams in the area, but food is scarce.   The city-dwellers usually trade crafts, rare goods and tools for meat, pelts and cheese. Milk is a rare, but very sought after ware to trade for. But due to the long, difficult distances to travel, milk is generally only available when a tribe has settled nearby. The nomadic tribes usually do not stay long enough in one location to make a smith viable, so most of their metal tools and weapons are traded for at Dedziin.

What few buildings the city has are built in a combination of wood and cut stone. The mountains are rich in sturdy stone and the quarries nearby produce ample amounts for building. Most buildings have a stone base, insulated with a mixture of mud, yak dung and a dried local tallgrass. Winters are brutal in Hakr'Næka, so the houses are usually well insulated and built to retain heat. The upper floors are usually made of wood, as is the roof, though the roofs are also covered in the same insulating muck, then covered with thatch to keep water running off. The highly slanted, slightly curved roofs are a signature of Nækan architecture.
Type
Capital
Population
~1500
Inhabitant Demonym
Nækan
Location under
Næka Mountains
Owner/Ruler
Süld yuv Ulz
Owning Organization
Hakr'Næka
Characters in Location
Majority languages
Urngut Tamgatai

In this paragraph:   The city-dwellers usually trade crafts, rare goods and tools for meat, pelts and cheese. --- Milk is a rare, but very sought after ware to trade for. But due to the long, difficult distances to travel, milk is generally only available when a tribe has settled nearby. --- All this focuses on milk.   ---The nomadic tribes usually do not stay long enough in one location to make a --- Until here you still think they're talking about milk. Because "milk is generally only available when a tribe has settled nearby". It leads up to the next sentence so well.   ---smith viable, so most of their metal tools and weapons are traded for at Dedziin.--- until it suddenly says "smith" and it's a really jarring thing to suddenly go from milk to smith with such a good setup to continue on milk. So I had to read the sentence like 3 times before I understood you'd moved on from the milk and left it behind.   /Nina

Would enjoy a description of the city as well. In the picture it seems a lot like it's a very distinguishable city, hanging off the cliffs. (Also no credit to that artist?). So maybe a "description of the city" could be enough, if you don't want to go into how the city is laid out. But I think what would be more welcome is how the city feels. Maybe from an outsider's point of view since it is so different? The article feels like it's missing something like that anyway.

PS. Would be nice to have a small picture at the end of the article where it's showed where in the Naeka mountains this town is located.