The zalra [tsal-ɾa:] are a dru'un subspecies. While not quite as brutish and thick as their dulzuun brethren are stereotyped as, the zalra are still dru'un. They are often strong, quick to anger and generally distrustful of strangers.

The zalra are surprisingly agile for their bulk and their horns make for excellent improvised weapons. However, compared to the dulzuun, the zalra prefer stealth and subterfuge over raw displays of strength. With their better eyesight and comparably sharp intellect, zalra make for excellent ranged combatants. 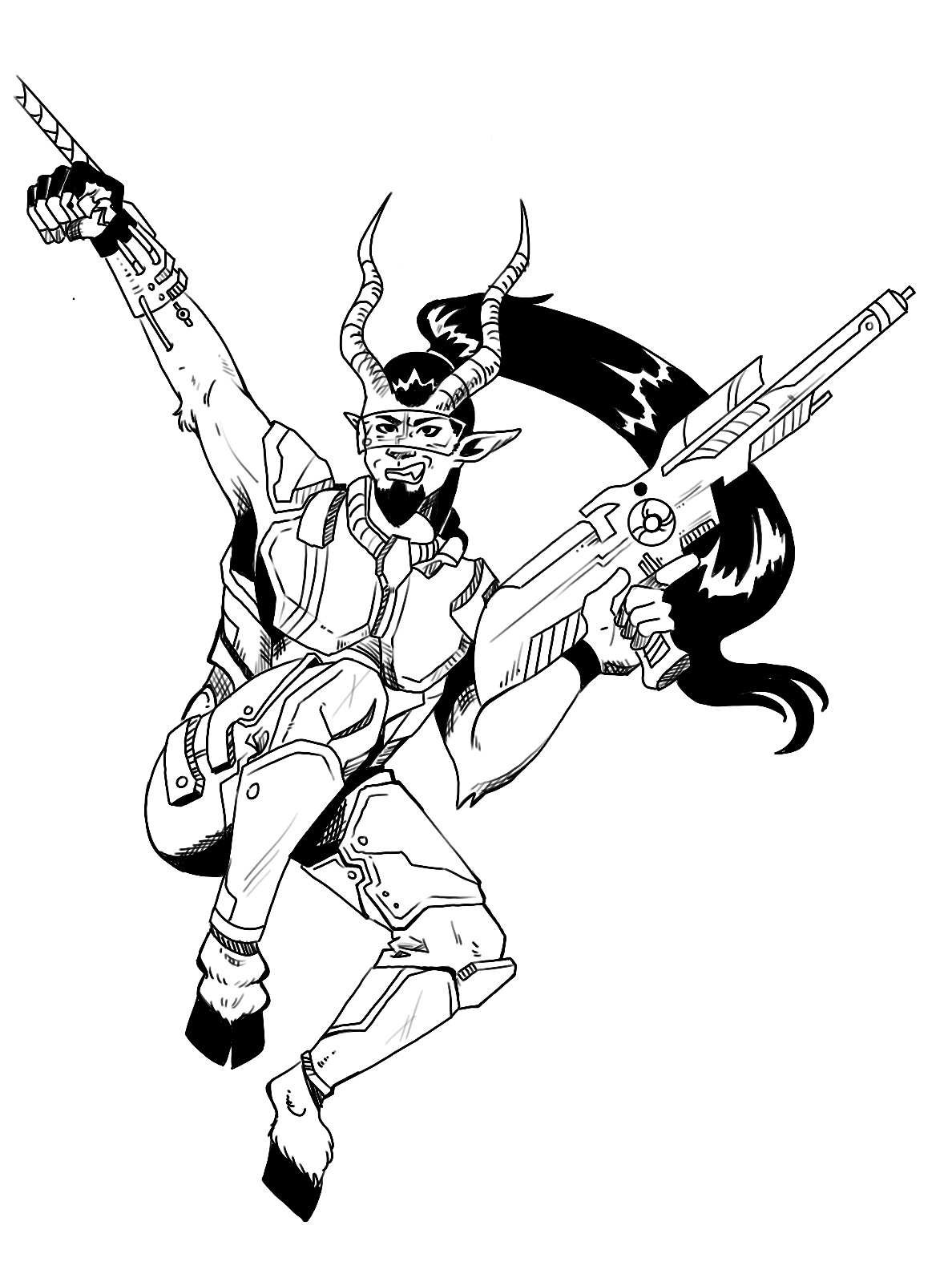 Zalra are significantly shorter than the dulzuun, although that doesn't quite show as much because most of them have long horns on their heads, artficially inflanting their height. They evoke a strong similiarity to mountain goats with their horns, wide, flat noses, pronounced chins and hooved feet. Like most dru'un they are digitigrade and possess five digits on their hands, including an opposing thumb.

Their ears are usually long and pointed, similar to vindral ears, although proportionally, zalra ears are far smaller. The have short, coarse fur on their entire body with longer tufts of hair on the elbows and very often a distinct, long beard. Most zalra also have wild, unmanageable hair, usually worn in a ponytail, unless regularly cut. They also possess significant fur growth on their thighs, making their legs look furry or hairy compared to their otherwise flat, short fur.

Zalra have long faces, a bushy mane and long, strong horns on their heads. The horns can either be straight, lightly curved or even twisted like corkscrews. Most of them also have a distinct beard, usually the same color as their fur, but there are zalra who possess a pigment anomaly that make their beard a strong, dark contrast to their fur. These zalra also have dark hair on their head, elbows and thighs in addition to the beard.

Zalra eyes are weird, reminiscent of the hessak's narrow pupil. But while the hessak pupil is upright, the zalra pupil is horizontal and has a larger ellipse-like shape in the center. Their noses are wide and flat, with a dark septum, usually black. The nose-bridge is slightly curved, like other species, but often wider and flatter.

While not as strong as the dulzuun, zalra are still incredibly muscular and like their piglike brethren also possess a strong adrenal response, giving them great power when stressed. However, they are quite a bit more agile than the dulzuun and their horns are very strong and can be used as improvised weapons. Among the zalra who have straight or corkscrew horns, they can also be used to skewer people with their sharp ends.

Thanks to the structure of their legs and massive thigh muscles, the zalra are excellent jumpers and most zalra would win a high-jump contest against the other species with ease, with exception of the nartaz.

It's hard to distill an entire species down to a stereotyped behaviour, but while dulzuun are brash, brutish and bullish the zalra are braggadocious, boastful and bold. They generally do not step down from a challenge and are keen to prove themselves. They tend to pursue situations where they can challenge themselves in some way, mostly to prove their worth in the eyes of others whom they respect. With their hot-blooded ancestry, this is not uncommonly in a brawl.

Not traditionally beautiful in the eyes of most species, the zalra suffer from a strong body odour that is somewhat musky and overpowering. In addition, their fur can be quite oily and feel like it's unclean, even when it is recently clean. Their boastful attitude can also be offputting to some people. The zalra are still dru'un and their distrust and difficulty handling other species also contribute to zalra isolating themselves romantically and there is a statistically significant portion of zalra seeking only zalra partners.

What is considered beautiful among zalra are well groomed hair and beard, nice eye-colors and of course, pleasantly shaped horns are a significant factor. Shaping the horns is a challenge as the horns are bone and difficult to affect. Most zalra decorate their horns with piercings, engravings or stickers but there are a few who wear horn-shaping braces for weeks on end to make the horns grow in a specific pattern. There is if course the option of cybernetic replacement, where the options are endless.

Goatmen in a cyberpunk world, now that’s something I’ve never seen done before! Well it may have been done somewhere and perhaps even by a caveman in the Neolithic age but this is the first time I’ve seen it being done by someone   Overall, I like the article not only for the way you write but also due to it being well put and straight to the fact. The writing style being very Orwellian ( which I love) is a good part. The physiology is nearly described too and it’s got everything one can wish for in a species   A few questions did spring up on my mind though   1) If their horns are broken, do they regenerate them? Perhaps use them as weapons if they can find them? And if they kill other Zalra, do they ever take their horns as trophies?   2) What’s their diet like?   3) What do they think of other species such as the Dulzuun, vindral and Kuna? Respect or absolute xenophobia or somewhere in between or something else entirely?   4) You say that they are great at using improvised weapons. Does it make them more suitable candidates for insurgent groups, cults and the like since they depend more on improvised weapons?   Anyways, i really love this article nonetheless! It’s straight and to the point so as to say which i always love ( and want to do but my prose keeps getting more and more detailed day by day) so this could be a lesson too! Congrats tobs and keep up the great work!

1. Their horns do not regenerate. Break it, and it remains broken.
2. Fairly mixed diet, much like the other species. They're not herbivore, as one might think.
3. Like all Dru'un, they're fairly distrustful of other species and often of other Zalra as well. They can overcome this instinct of course, but on an instinctual level they are a tad "paranoid" towards others.
4. I didn't actually say that. I did say that their horns make for great improvised weapons. The Zalra are about as suitable for insurgent groups as any other species really.