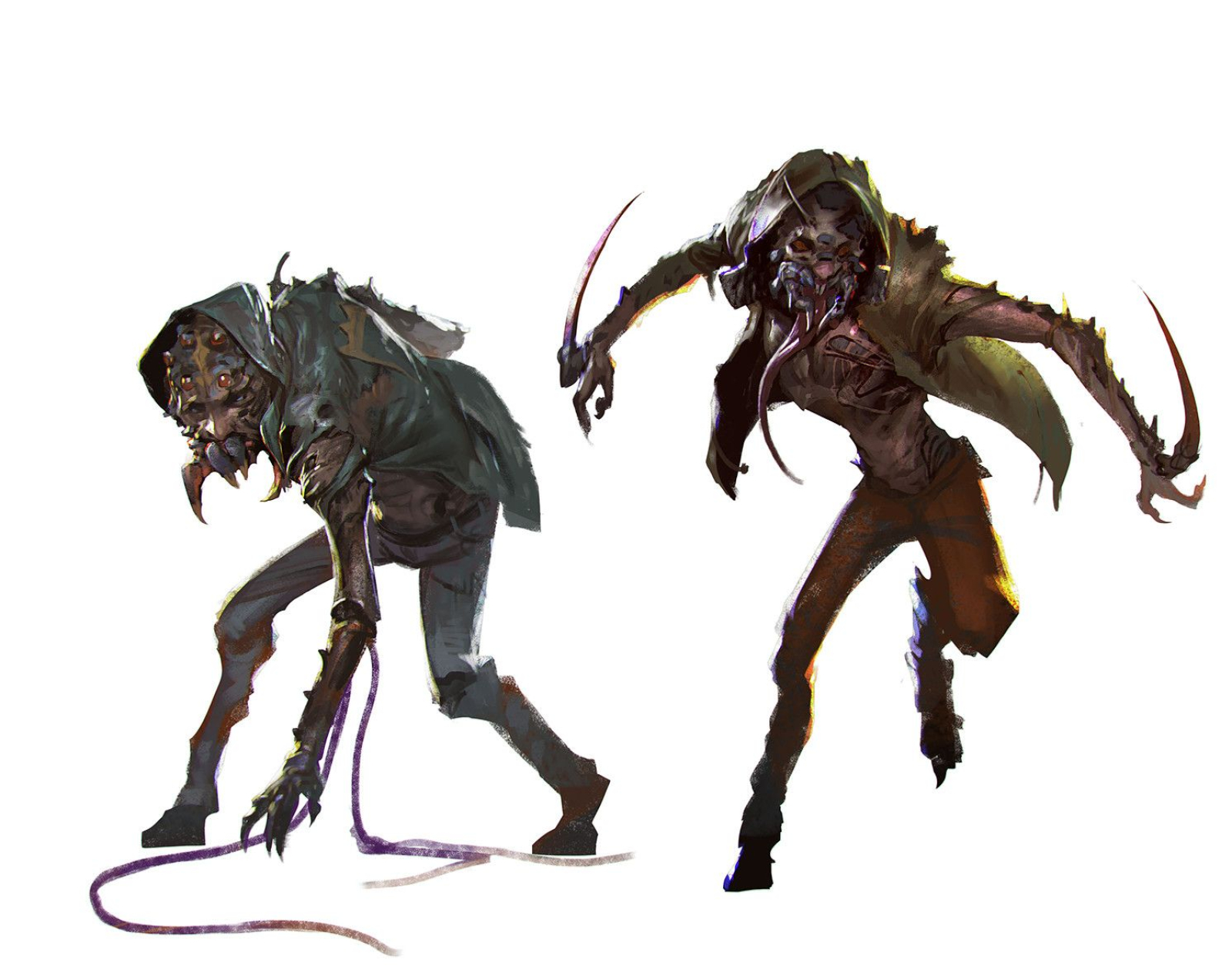 "We know how you have harmed this place with your pollution. Your violence. And your discord. When we spread across the world, we will cleanse it. Merge all of its flesh with the Mass. Join with us! Enjoy the ecstacy of our union.

So what shall it be? Will you join the Glorious Mass... or do you DIE here?"

Officially labeled a terrorist group, The Mass is a fanatical group of true, and other mutants, led by a monstrous, mutated entity who believe that the faults of the kykr and the destruction of the Cataclysm can only be cured by ascension to physical perfection. The Mass plan to either convert everyone to mutants or wipe every last shred of unmutated DNA off the face of the world. 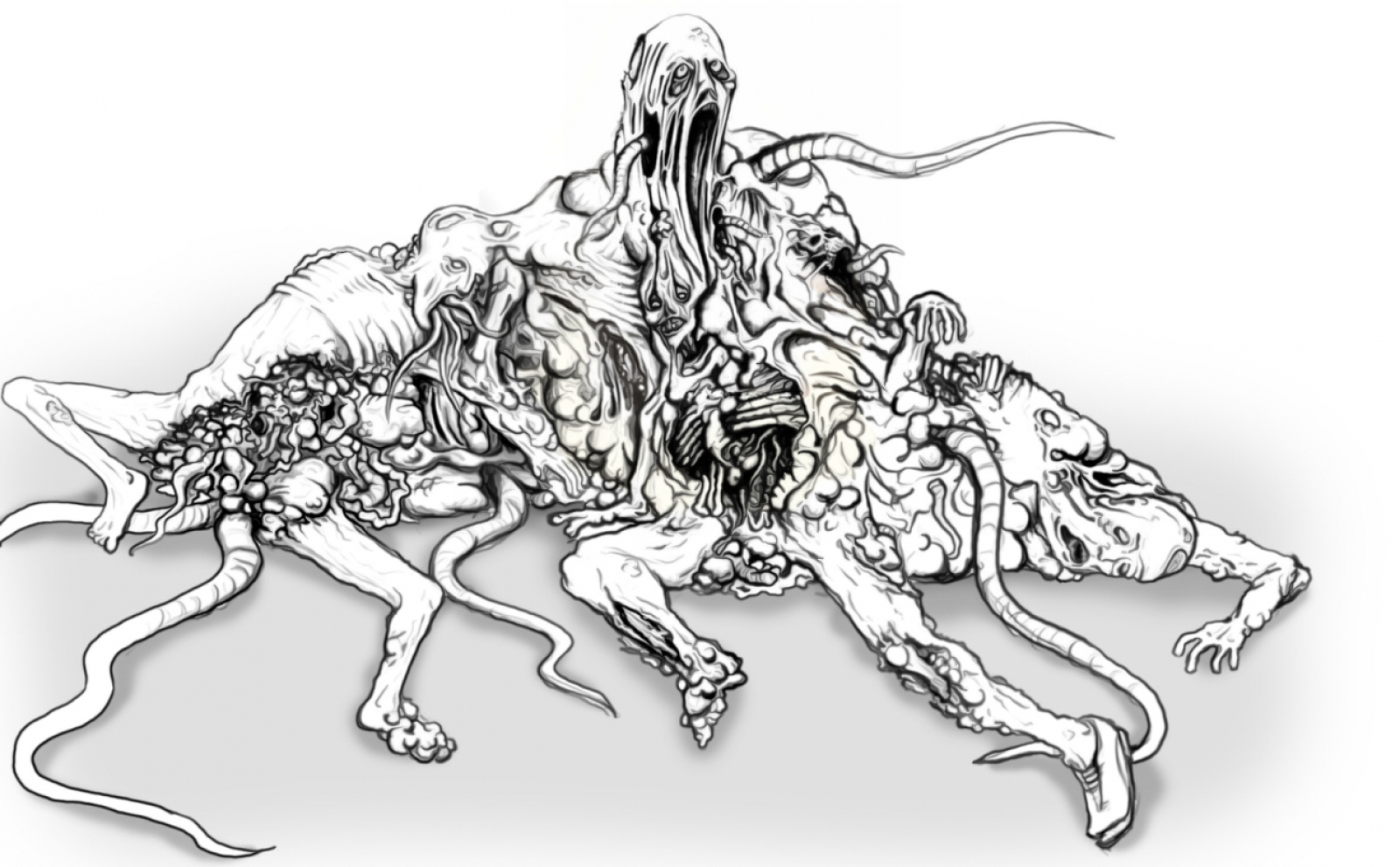 It is not known who or what the entity was before its horrific mutation into what it is now, but it emerged in the wastelands, near the coast far to the west in an area now known as the Outlands. The entity is said to be so drenched with deep shade corruption that being in its mere presence can spark mutations in heathly tissue. The entity calls itself "The Processor" and once formed, it gathered a following of mutants who became its agents in the world. It is unknown whether the entity found the mutants and "adopted" them or if it simply created them. Either way, they are fiercly loyal to the abominable horror, believing its every word.

The entity refers to the world's destruction and the "infestation" of unaltered flesh as a "plague" on the world. It believes that the only cure for the world's plague is physical ascension through mutation. The complete deletion of variance within the physical flesh. No species. No cultures. No genders. Just one flesh. One Mass.

While the Processor is the clear leader and voice of the Mass, it speaks of "The Mass" as an entity on its own. As if the entirety of the Mass was little more than one body with many limbs, or perhaps cells. It appears to consider the Mass a single body and one mind. People who are captured are given the choice to join the Mass or be killed, as obstacles between the Processor and the physical ascension of the world's flesh.

Rumor has it that those who accept are mutated beyond recognition, turned into horribly disfigured monstrosities and melded to fulfill some purpose in the Mass. There is a rumor that there exists a journal, recovered from near what is said to be the Mass' heart, that speaks of something called "Flesh Pits", in which prisoners are thrown. These pits are filled with bodies in differing stages of amalgamation and the prisoners are supposedly consumed by the flesh, becoming one, huge monstrosity as their individuality is slowly subsumed and replaced by the will of the Mass. However, it is all but rumor and hearsay.

Through the stinking mist I saw a pool, filled to the brim with shapeless flesh. Limbs with nailless hands protruding from it's repulsive, undulating surface, grasping impotently at the air. Eyeless heads, faces with gaping mouths screaming in torment. Alien voices tearing the air apart in a cacaphony of terror. Their crying voices, slowly subsumed into a murmur. A union praise to the Mass. The pile of flesh suddenly spoke, its thousand voices echoing through the tenebrous cave. I can scarcely speak of it, lest my mind give way to madness.

— Pages of a journal recovered from the Outlands

We must ascend our putrid flesh into glorious perfection

Mutants are a subspecies of the Kykr species. Commonly mutated during gestation and born with mutations, mutants are second class citizens, at best, at the bottom of the societal ladder.

The True Mutants are so mutated that you can no longer discern what species the mutant was originally. They are often alien to the other species and shunned from society. True mutants are relegated to The Promised Land or worse: The Mass. 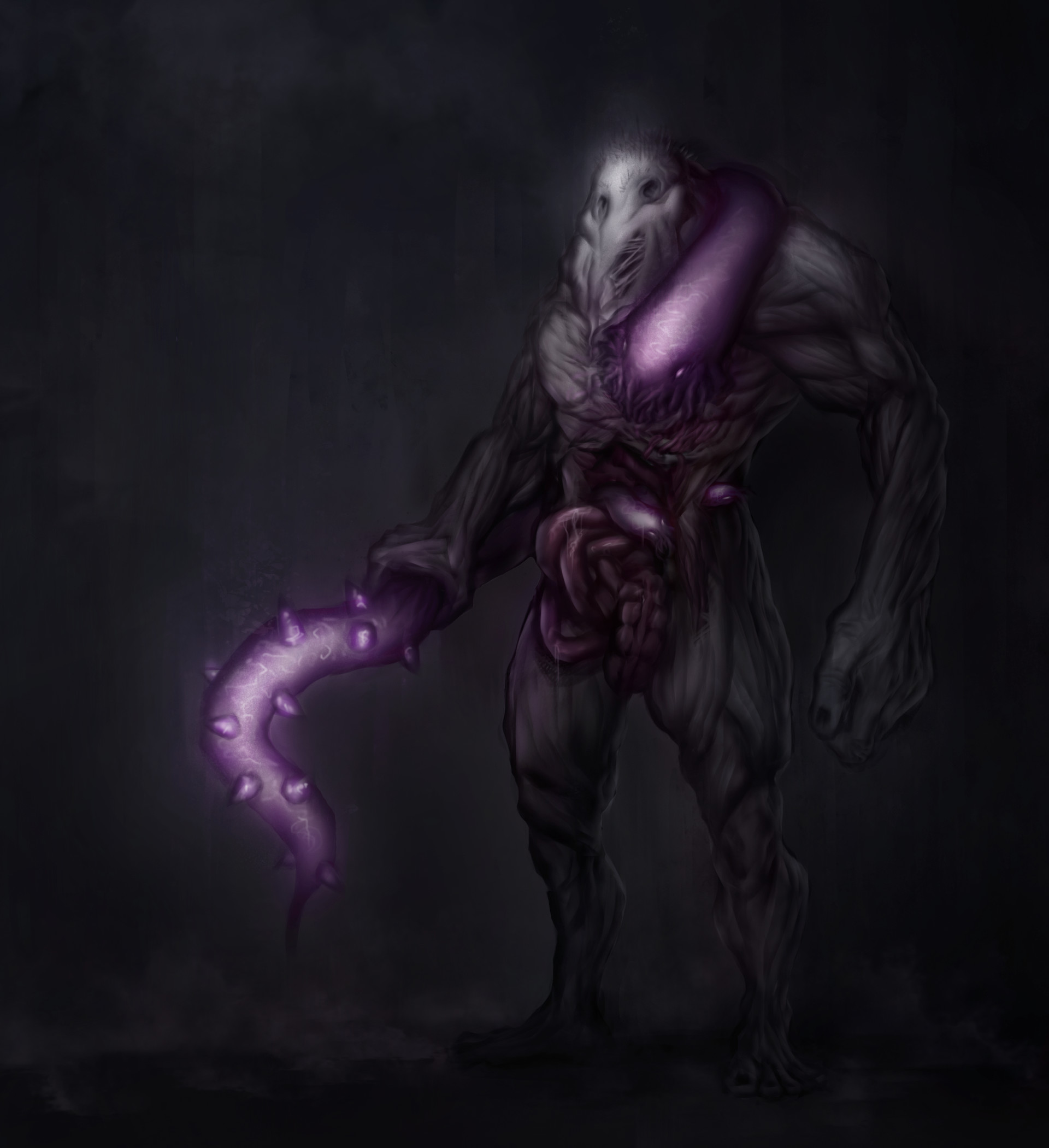 Mutants from the Mass regularly raid and pillage nearby settlements, capture its inhabitants and bring them back to the Processor. No one has ever returned from being captured by the mutants, so one can only speculate of the horrors they are exposed to. Perhaps they are mercifully slain and used as food and fodder, but it is more likely that they are thrown into the Flesh Pits, to be slowly consumed and amalgamated into the Processor, melding with its flesh and mind, forever ceasing to be an individual and becoming part of the Mass. It is not known if this "flesh pit" is the Processor itself, or if the Processor is a separate entity.

"The Mass does not know death. It does not know sorrow. Only change. What is a thought compared to the Mind? What is your tiny individuality compared to our glorious Mass? Join the Mass and you will never again be weak, alone or helpless."

Cysts of the Mass

The way that the Processor extends its influence is through powerful psionics. It extends an attraction field that slowly compels people to come to it for "processing". This psionic field, while impressive, is limited in range and for this reason the Processor needs to create amplifiers for its psionic abilities. It sends off a piece of itself to be carried to a new area and installed in a secured, hidden location, near civilisation. This piece is then grown into a cyst of the Mass which functions as a psionic amplifier and extends the psionic field into the nearby area.

These cysts are both part of the Processor and their own, separate flesh. The Processor considers them part of the Mass but they are physically disconnected and the Processor cannot access the mind of the Cyst, only relay it's psionic field through it. It cannot use shadow magic or directed psionic abilities through the Cyst, it is just the equivalent of a psionic antenna.

While the Processor wants to mutate the world, it appears as though True Mutants are the end goal. Regular mutants still retain the vast majority of their "unspoiled" DNA and are recognizable as their origin species, while true mutants are wholly transformed on a fundamental level. Not even a DNA analysis will reveal what species they were born as.

This may be why regular mutants are treated as if they were expendable and are used as the foot soldiers of the Mass. Perhaps the Processor believes that they contain too much "unspoiled" DNA to fully be a part of the Mass, or perhaps it is some form of incomplete mutation. It is not known if the mutants can be further mutated into True Mutants or if their partial mutation prevents the full transformation. Either way, these mutants are considered failures. Vestigial and useless.

The Mass may have access to some pre-Cataclysm construction plants or storage houses, as their sentries and soldiers are well equipped with high technology weapons and armor. Coupled with their single-minded purpose of converting the world, they are an extraordinary threat to the world. The Mass controls the Outlands, effectively blocking anyone from reaching the coast or the islands unless they have a deathwish or insane luck. What few survivors still make their living in these parts live under constant threat of capture.

Articles under The Mass

An amalgamation of bodies and mutated, living flesh that is the leader of the organization known as the Mass

The Flesh Pits are the rumored "home" of the The Mass and its abominable leader, the Processor. Said to be a "sea of flesh" where organic creatures are processed and incorporated into the Processor.

I'm going to try and list things as I go through this, might seem nitpicky but I'm just gonna point out what I see as I see it!   Intro quote - "ectacy" should be ecstasy.   THE PROCESSOR AND THE FORM- "loyaly" should be loyal; Also, I'd like to know what this "plague" that's referred to is.   THE MASS- Starting that second sentence with "As if" sounds a bit odd after using "as if" in the previous sentence; "monstrosities, [and] melded" would sound more natural, I think.   Processing Cysts - "secured, remote location, near civilisation." this sounds like an oxymoron. If a location is remote, it is definitionally not near civilization. I'd suggest just taking out ", remote", as I think just saying "secured location" gets the point across.   Mutants and True Mutants - I think this whole section could be expanded. I did just notice that you have links to articles within the related reading section for these, but I think expanding this section at least a bit and also linking to those articles within it would go a long way to flesh this out.   If I had one suggestion for the article overall, I would suggest clarifying earlier on that the Concord is made up of individual entities, even if they are basically hive minded. For the longest time at the beginning of the article I thought it was referring to a single, massive entity made up of thousands of bodies fused together. Maybe I just read something wrong going into it, but that was how it appeared to me until like halfway through the article. _______________________________________________ Again, sorry if this comes off as nitpicky, that wasn't the intention! I was just writing things down as I went through the article! I like it a lot, and the concept is super creepy! Good job!

Thank you for the detailed break down! I've adressed all the points you brought up. Thanks!

ooo ok, so first lemme say im sorry for it taking so much time. its been a rough week. The opening quote fits the feel of the article well, and so does the intro. I am now reminded as i read: The Processors endgame... Does this one flesh include one mind or is it just a bunch of partial minds under its control. If i remember right it cant be a hivemind anymore or at least not like it used to be. Ill have to look that one up. you do go on to say that their will is subsumed by the mass so there is that.   OOOO the journal. that's my favorite in this one. Its unsettling and the body horror is done quite well. i dont really have a least favorite thing. i think its cool they use old tech too. For expansion, id love to know more about the journal. Tell me you have a doc article planned cause im very interested in reading more. Love it!

You are correct that it can no longer be a hive mind, but that doesn't stop it from trying.   The difference is sort of a bowl of berries, versus a slushy. It's current incorporation just "blends" all consciousness together.