Combat droids are semi-autonomous robots designed to fight or provide security. Often durable and with lightning fast reflexes, combat droids are a real threat on the battlefield and corporations use them as high-threat security at key installations.

There are no fully autonomous robots and those capable of large independence are stupendously expensive and complicated machines. Corporations have attempted to develop robots capable of operating independent of an operator, yet none have achieved that goal. Every model of combat droid on the market today is sold together with a complex and sophisticated control system, designed to interface with a security system of sensors, or as a direct control drone.

A droid operating in Direct Control mode is utterly incapable of any independent action as it requires a control system and an operator. The operator controls the robot through the interface by either issuing commands or direct control through an almost game-like system.

In SAO mode the droid is little more than a mobile turret linked to a sensor grid and a control system. The control system interlinks multiple sensors such as IR cameras, laser trip lines, optical cameras, motion detectors, tremble sensors, facial detectors etc. The sensor grid becomes the eyes, ears and senses of the droids linked to it and they operate according to a rigidly defined behaviour list, only requesting input from an operator when it encounters an undefined situation. Their ability to self-determination and improvised behaviour is virtually nil in this mode, instead relying on the central control system to do all the thinking.

Droids can track a potential intruder through these systems and coordinate with other droids in cornering and apprehending the individual(s). Security droids operate in non-lethal mode and deliver a demand for surrender, alternatively a demand for the individual to vacate the premises. If the droid comes under attack or the perpetrator does not obey the commands, the droid may engage. Whether it carries non-lethal weaponry or full military outfit is up to the corporation in question and what licenses the corporation possesses for armed security forces.

The reality, however, is that most corporations do whatever they want, since any transgressions of armed licenses is handled by corporate police forces who happily look sideways.

An R&D cooperation between Marek Accoutrement(MAKA) and Vandrid Cyberlogics is trying to develop a market-ready method to allow an individual with a cybernetic neural interface to have direct combat control of a droid through the interface. MAKA’s combat droids are popular on the market, and allowing an on-site operator to direct the droids by thought alone would cut droid control latency down to the speed of thought, rather than using a terminal or central sensor-based program.

There are no market-ready cybernetic interfaces that can interface with droids, and none of the main models of droids have support for cybernetic interfacing, but MAKA and Vandrid Cyberlogics claim to have working prototypes in testing. There have also been several incidents where someone has jury-rigged their own interface for a single droid, and this illicit modification is something that the Goptah organization claims to offer. They can even sell you both the droid and the interface in the deal.

HKs are the most advanced and expensive droids on the market. HKs are usually high-end models, versatile and effective, carrying software capable of operating independently in most encountered situations. They usually house a much more powerful central processing unit with a purpose-designed Virtual Intelligence in it. An HK can operate for days or even weeks without input from an operator, the VI handling even the most complex of situations. Whenever it is in need of external input, the VI can request support from a central server through a private tunnel.

Because of their extreme operational costs, corporations and police deploy HKs only when particularly dangerous individuals or groups needs “taking care of”. The HK operates out of a “hit-list” of people it needs to eliminate. Through the central server, the VI can use all open sources on the Web, such as Ly-R-AIn-E, to gather information on its target and is so effective it seems almost alive.

Using HKs is something heavily debated in society from a moral standpoint and corporation’s operation of HKs is in question. Should corporations have access to HKs, as their use is little more than targeted assassination? The use of HKs for defensive or security purposes is generally seen as overkill, but many corporations claim it to be an absolute necessity.

There are two main manufacturers of combat droids, or rather “Security Robotics” as marketing states. Marek Accoutrement, as previously mentioned, is the most high-end developer and manufacturer of robotics. Their droids mimic familiar forms, such as bipedal droids designed to look like the overall shape of citizens. Most of the droids are digitigrade and are capable of four-legged locomotion, allowing them great land-based speed. MAKA's options are the most expensive, but most versatile on the market.

Sága Robotics is the second largest developer of combat droids and their models are far less intimidating and familiar than MAKA’s offerings. Sága’s droids are utilitarian and designed for a specific terrain or operative scenario, rather than mimicking the adaptability of fauna. Corporations buy Sága’s droids for static defenses and patrolling security in high security installations and Sága’s models are the most common on the market. These droids often feature tracked locomotion, allowing for a stable platform for repeating projectile weapons and not being so easily tripped as MAKA's options. They are not as fast, versatile or flexible as MAKA’s models, but they come at perhaps a tenth of the cost, allowing corporations to field many more of them. The tracked configuration does present some difficulties with movement, however, as they don't handle stairs or steep inclines well. 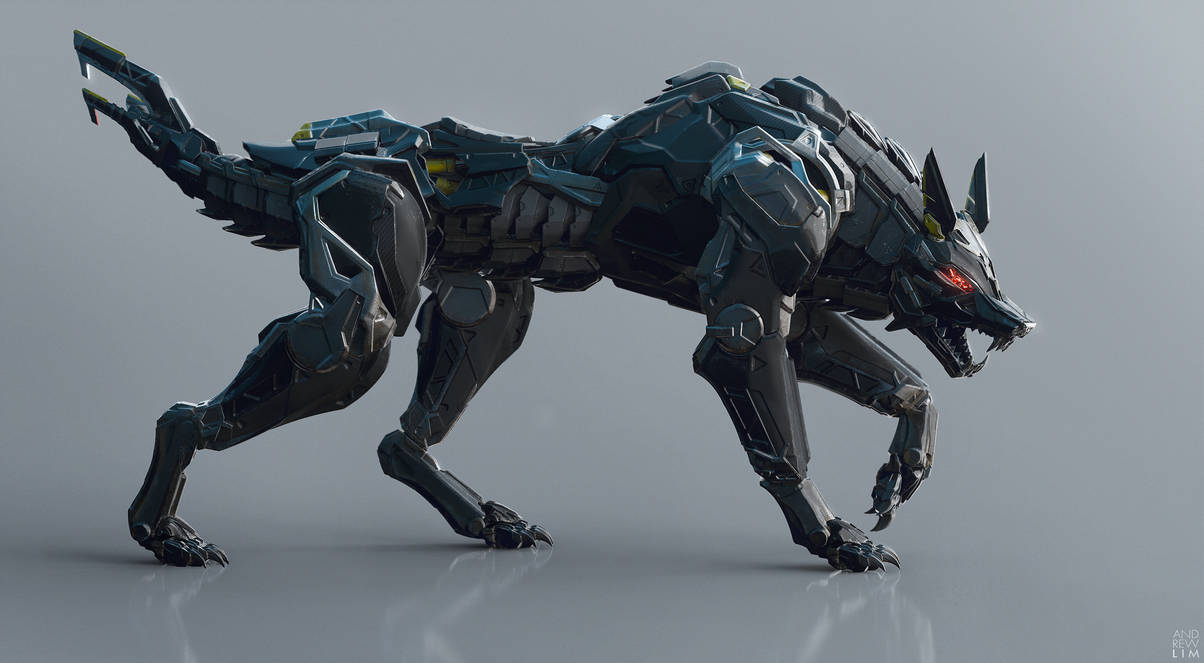 Their “WOLF-359” model resembles a gimroan plains wolf, a now extinct species of giant wolves, used as riding animals in feudal times. This model has two weapon hard points capable of mounting both projectile and energy weapons, and its jaws and claws are lethal in a melee. They can also bite through thinner steel, such as wire fences, common commercial car doors and make mincemeat out of wooden doors or fences. The WOLF-359 is the most common model run in HK mode for hunting down dissidents and dangerous criminals. It’s frighteningly effective at its job.

MAKA also develops the “HAWK 7” which is a small aerial drone designed primarily for surveillance and acting as an airborne sensor for supporting other, ground-based drones. 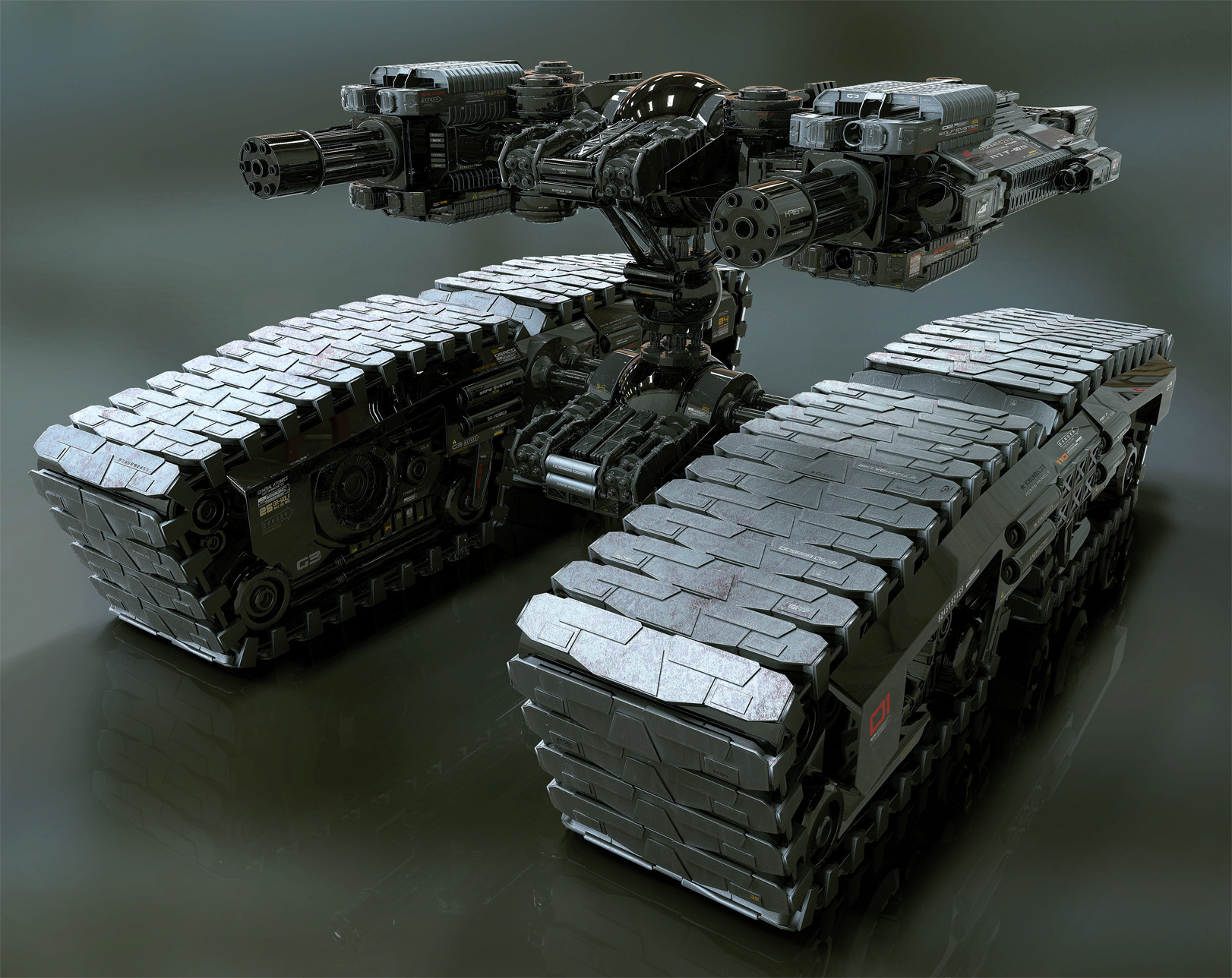 The Twin is Sága Robotics' best selling model. It's a stable, twin-mount model on a robust tracked platform. The twin gun mounts are able to swivel on their mounts, offering a convergence point between anything from 5 meters to 100 meters and the mid-section can rotate to give the droid 360 degrees of coverage. It's sensor package is limited and it usually relies on external input for full battlefield perception.

Well goddamn was that a good article! The formatting and details combined with the artwork made this a short and frankly, very inspirational article to read! By just reading this, I’ve gotten an idea for my world so thank you there as well! Other than that, I have not much to say since I’m tired as heck atm but I think a little short story like in some of your other articles would help to make this article more lively ( not that it isn’t dead or like that). If this is meant to be a normal article without much importance, then it’s completely fine! Congratulations and keep up the damned fine work!

It is, indeed, too short. I'm working on it, and I just published a large update to it.