Yonderverse       Fauna & Flora    Fauna    Invertebrates    Cephalopods      Red-Eyed Deepsquid
Red-eyed deepsquid are large cephalopods found in the deeper oceans of Hothiri. A newly discovered species, when they washed up on the shores of the only island on the planet they were consumed and now these animals are a delicacy among workers.

Red-eyed deepsquids are between 8 and 9 metres in length as adults. They have reddish/brown skin, with bright red eyes. They have just one eye, covering a large portion of their heads. They have eight anchor like arms, with two long tentacles, that reach up to three times the length of their arms. On the squid's sides just below their eyes, are large rocket like appendages which help push themselves through the water.

It isn't fully clear how red-eyed deepsquid reproduce, but we do know that they lay many cylindrical eggs, carried in their arms. A few egg-carrying squid have washed up on shores, so we know that female squid produce up to a million eggs at any one time. These eggs take about a week or two to hatch, paralarvae leaving parents immediately and surviving on their own.

The stomachs of beached squid have been analysed, and several species have been determined. They are carnivores, feasting on many creatures such as alu'fiku, nemmens and other red-eyed deepsquid.

Red-eyed deepsquids were discovered fairly recently, after hundreds of them washed ashore on Iroquet after a tidal wave. Nobody knows what caused this wave, but they know it came from deep waters, where these squid are naturally found. The first thing the workers did when they found these squid, was cut off an arm and taste it.

The most popular part of these squid to be eaten are the eyes. They are fried in vegetable oil, sprinkled on with spices, and then consumed by multiple people at once, each with spoons to scoop away. The rest of the squid is also eaten; the arms and tentacles fried and put on sticks, used to eat as workers harvested the resources of Hothiri. 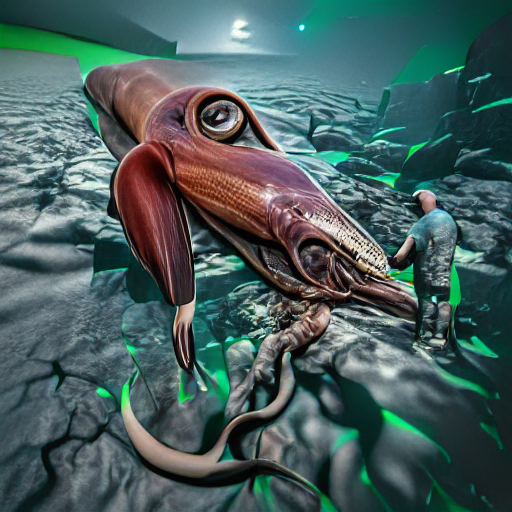 Answering: "A recently discovered, or rediscovered, species."
Visit Mochimanoban's Competition Page Check all other answers to this prompt Competition Homepage

Cool squids! I love it! Nice description and article you got there :D

I am scared of the people who thoght it is good idea to just taste a random squid which poped on a shore one day. More scared of them than whatever caused the wave in first place!   Is there an organisation that deal with tasting random stuff?