It's crazy. The discovery of Ara and the arborians was the first proper evidence there was intelligent life before us humans. We've always thought we were the first sapient beings, and now we know there was a whole species that lived alongside dinosaurs and in the trees? It's remarkable.
— Human Palaeontologist

The arborians were a race of saurians that inhabited what is now known as Germany. At the time, Germany was an island chain, and the arborians were limited to just one island, Permari.   The discovery of arborians made headlines across planet Earth, as it was the first ever proof of sapient life prior to humans.   Fun Fact!
Sapient species in the People's Association's (PA) documents are organised by planet, and since saurians were the first sapient species on Earth, they created the category!

The discovery of arborians dates back to 2013. The skull and hand fossil of an arborian was uncovered in southern Germany. The fossil was named Ara, and was discovered by German palaeontologist Hanne Riese, born 1984. The fossil's discovery was quickly made public, thanks to Riese's incapability of keeping it a secret. Rumours were spread about this "new sapient species", and scientists, palaeontologists, archaeologists and tourists all flocked to southern Germany to investigate. Hanne Riese quickly became a known face, and the discovery of the saurian species earned her a Nobel Prize in Archaeology, the first person to ever win one.   As the first of its species discovered, archaeologists at the time did not know that saurians had formed various cultures. The discovery of arborian and ilvarian cultures, among a few others, happened in 2017, when a whole settlement of saurians were discovered. The clothing wore by these saurians were vastly different than the clothing worn by Ara, resulting in the theory that saurians had formed various cultures. More dig sites uncovering saurian settlements later confirmed this theory, and now it is believed there were up to 10 vastly different cultures, found across Germany and western France.

The first fossil of the saurian species, and arborian race, was named Ara. It was named after Ara Riese, Hanne's sister, who initially encouraged her to pursue her palaeontology dreams. The fossil was put on display in the Museum für Naturkunde in Berlin, but later taken into a private collection after Jupiter took control of Earth.
Late Jurassic Earth
Open full size

Arborian agriculture was more unique than previously thought. It appears that arborians were omnivores, and typically fed on a mushroom based diet. On the sides of the trees they built their treehouses on, they would grow small tree fungi which they ate both cooked and raw. While they did hunt insects, small dinosaurs and other animals on the ground floor, they typically consumed plant and fungi material.

The biggest tradition for the arborians is the annual hunt. The hunts start at the beginning of autumn, and last about a week. In these hunts, arborians will take their most lethal weapons and hunt down as many dinosaurs as they can, and drag them back to their villages, storing them in ice-filled containers to eat at a later date. They do this so they don't have to search for food during the winters, when food is more scarce, similarly to many modern animals on Earth.

As odd as it might be for a reptile to wear clothes made of scales, arborians fashioned short dresses made of them. These scales come from the corpses of dinosaurs they find as they hunt for prey. To better personalise their clothing, arborians also decorate their dresses with feathers from archaeopteryx molts.

With no competition in terms of intelligence, arborians solely focused on survival. This meant the most advanced technologies were weapons, as many dinosaurs and other animals could easily overpower them. Arborians developed weapons similar to bows and arrows of the modern world; instead of arrows, exploding seeds are fired which cause irritability in the skin of whatever was hit.

Arborians, unlike Ilvians, successfully domesticated a few species. Their favourite creature to tame and harness was the archaeopteryx, an animal considered the turning point in bird evolution. These animals would be used to send letters to others in arborian tribes, by tying them to their legs or backs. Other animal species that had been domesticated by the arborians include the europasaurus, a small sauropod species that was used for long distance travel. They were easy to tame, thanks to their docile nature.   List of domesticated species

Arborian architecture was surprisingly complicated. The houses were mostly made of wood; planks arranged in a large circle surrounding a tree trunk, usually rather high up the tree, with five or six branches extending a few metres, and a cone shaped roof made of thick leaves banded together.
More important houses, say for important people or community buildings, were much more sophisticated. Some were lined with dinosaur scales, harvested from corpses which were surprisingly common. 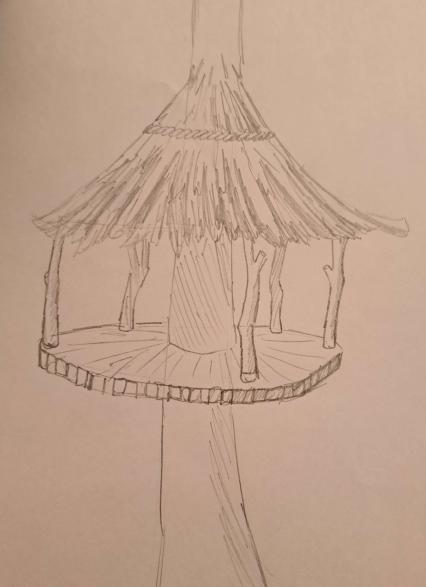 The extinction of the arborians, and the entire saurian species, occurred 135 million years ago, after an asteroid landed in the Tethys Ocean, 200 miles off the coast of Permari. The Jurassic-Cretaceous extinction was not considered a mass extinction, as many species lived on past the boundary. Instead, many theorise smaller asteroids struck the planet, killing off large populations, but not entire species. It was just unfortunate enough that this asteroid was so close to the arborian settlements that the entire species died out.
The asteroid kicked up large cloud of dust and sediment, that shielded light from the Sun and caused plants to wilt and die. These plants were the start of the food web, and their extinction subsequently caused herbivores to die out from a lack of food, and then carnivores. Ordinarily, carnivores would have just consumed the corpses of herbivores, but toxic chemicals in the air made the animals inedible.
Ethnicities & Cultures

What a pretty and well-organised article. I truly enjoyed reading it and learning more about culture. I found the introduction story very interesting, it sat the tone right away for the culture to feel old. I found several things that have potential to be written more about, which I wrote to you in discord. Thank you for a great article <3

I'm about to cry this is so nice- I really appreciate the thoughts in discord, I will definitely come to you when I develop the clothing section more, and I shall add more in general over the course of the challenge.   Thank you so much for liking and commenting! <3

Great read. It is a cool idea to have an intelligent species before Humans that interacted with dinosaurs! The article itself was pretty fun to read through and well structured. A village of those houses must look pretty cool! Were they all connected by bridges or did they travel down to go to other trees?

I'm glad you enjoyed the article! I have been obsessed with these people ever since I thought of them a few weeks ago, and I was overjoyed when this challenge was announced because it was perfect. The houses are connected with bridges, and since the trees grow so closely together it doesn't take long to get from one house to another - probably just a few seconds.   Thank you so much for liking and commenting! <3

I really love this article, It is amazing and really well organized, From start to finish it flowed nicely and its really a great article, Love the CSS you used as well. Great job!

Thank you so much! That really means a lot :)

I love the quality of your worldbuilding. I found myself searching to see how much of this was real. LOL Your world is beautiful and your writing is a delight to read.

xD I am so glad you enjoyed the article, it means a lot <3

This was great and you have my favorite things ... clicky buttons!

Thank you so much for checking out my entry! Clicky buttons are very fun, yes xD

Me too! Glad you enjoyed the article :D

Ahhhh dinosaur clothes! I need them!

I should TOTALLY make a dinosaur clothing line xD