— A note, left with a child on the doorstep of the Bilogsh Temple of Luze

"To she who soothes, I give unto you my child. Bless me and my son with happiness and affluence. Forgive me, mother."

Within the Uganë Empire, with the exception of head-goddess Zaab, no female god of the Niuua Pantheon is more revered than that of Haslaah. Perhaps because of her status as the first wife of Faskato and the cult which surrounds him, or her appeal to the often marginalised peoples of the empire.

The Oupii are the name given to the music and artistic Gods. They are a set of seven sisters born to two minor Gods, Hinaa, God of remembrance, and his wife Akapi, Goddess of inspiration.

In gratitude, the husband and wife were granted the ability to bear children as Akapi had been assumed barren. However, these children were granted gifts two: a great affinity with the arts.

In the House of Zaab 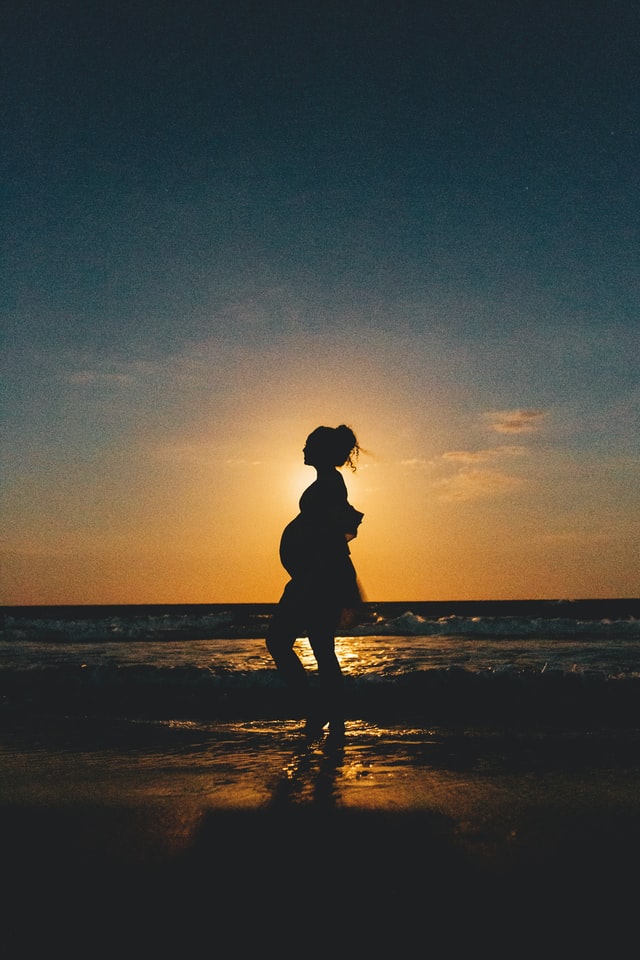 In the hundred-doored House of Zaab, a baby girl lets out her first cry. That is Haslaah, the fourth of seven children. Her crib is attended to by her sisters, Tinya and Kuji, as their mother sleeps at last.
— A fragment of the Myth

Haslaah’s birth was a difficult one, at least in the eyes of the Gods, who are not meant to feel any pain. Some myths claim she was cradled by Zaab herself, or by Dyshe or Byansa. But it is neither here nor there.

As with all divine children, those younger years were spent playing and discovering the world with her sisters. The girls passed the days playing their instruments and dancing in one of the far chambers of that house.

A boy lays an offering in the centre of the house, some dead livestock and jewellery, when Haslaah is passing by. Easily intrigued, she follows him. That is Faskato, and this will not be the last she will see of him.
— Another fragment

The two met again and again in the house. He listened to her play and compose in a far chamber of the east wing. She watched from the window, him coming to and fro from the great forge that bears his name. 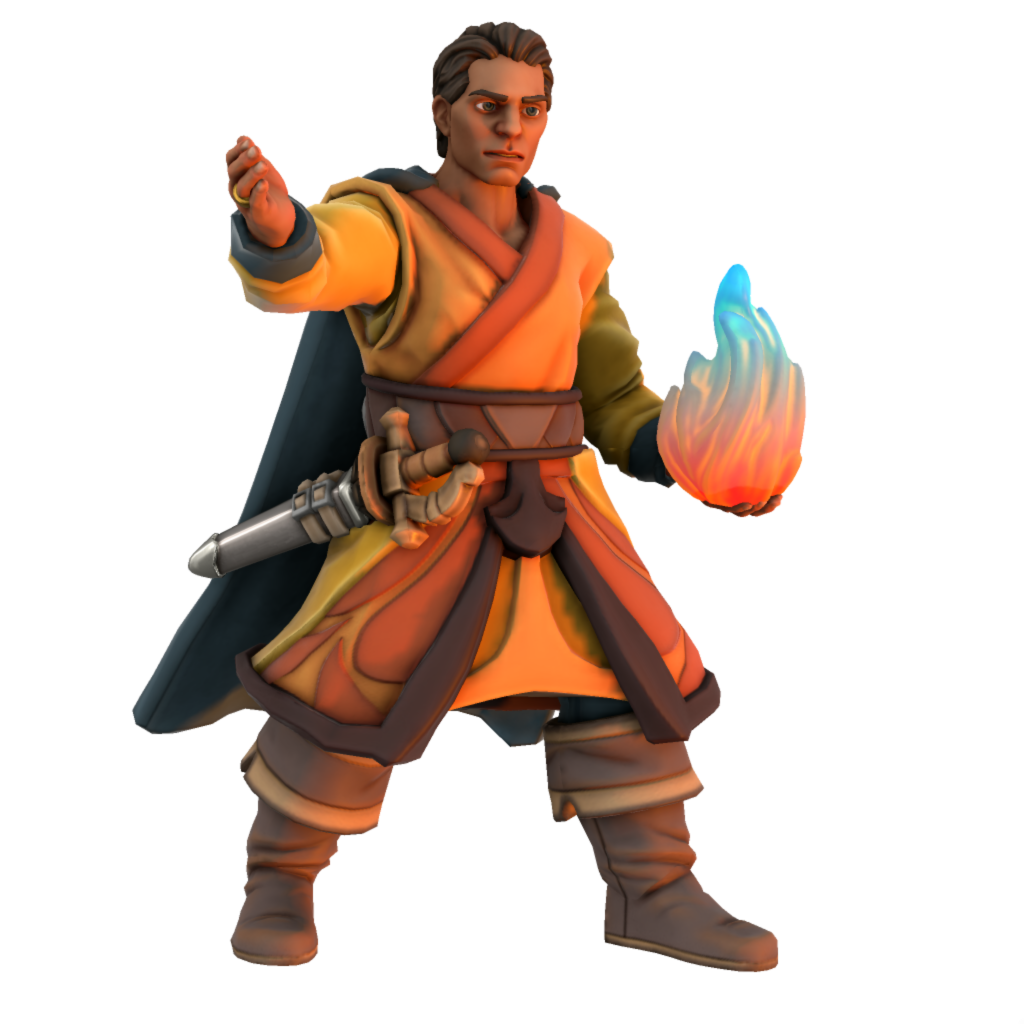 However, they never talked and merely fell in love from afar. Haslaah left him flowers and parchments of poems and melodies, inked in her delicate hands. Faskato left her gifts and bracelets. There is no concrete telling of when they finally talked. The myths vary from region to region. Sometimes Zaab pushes the pair together. Sometimes they meet in the thick gardens surrounding the vast house on a warm midsummer’s night.

Either way, what ensues after that was a ‘long courtship’ as is common within the mythos, and they eventually wed underneath the starlight of midwinter. As she is the first wife of Faskato, she will lead the household for eternity by rite of precedence between wives. Despite being Faskato’s wife, her myths also often include Kastav’s attempted seduction of her. The inclusion of Kastav in her myths is most common in the East of Xharan where the cult of Kastav is more present and Kastavic Law is more important.

Haslaah is not as openly worshipped by the populace as her husband is. Those who worship her tend to do so in private (baring feast days and holidays), often at a ‘mixed shrine’ or a taksha. These shrines are in the home (or outside of it) and dedicated to multiple Gods, mainly ones of the domestic realm or associated with it. They also are often dedicated to a main god and his/her spouses, such is the case with Haslaah.

Outside of the home, the worship of Haslaah focuses on the Temple to Haslaah of Voost, the alternate capital of the Empire, where the monarchy tend to spend their days. For those of Luze who are devoted to this music goddess (especially musicians and older women), it has become quite the tradition to take part in pilgrimage to this temple. Some take a season to take in the richness of this majestic temple, funded most recently by Khōy Núthfaeř, having turned to her for comfort due to her marital predicament.

Many of those aforementioned old women, usually widows, take vows to the temple. For a clergy so male dominated, the order of nuns and priestesses of Haslaah are one of the rare female-only organisations within the faith. The Hasalic Order of Priests and Nuns tend to take part in community works, often assisting with the musical education of the poorer parts of society to who music is a limited resource and instruments a fortune, worth years of wages.

Those Who Worship her

Friend to the unfortunate

Even though she is not a goddess of luck or the household, she is often prayed to in times of hardship. Throughout her myths, she is often portrayed as one - if not the most - generous of the Gods. 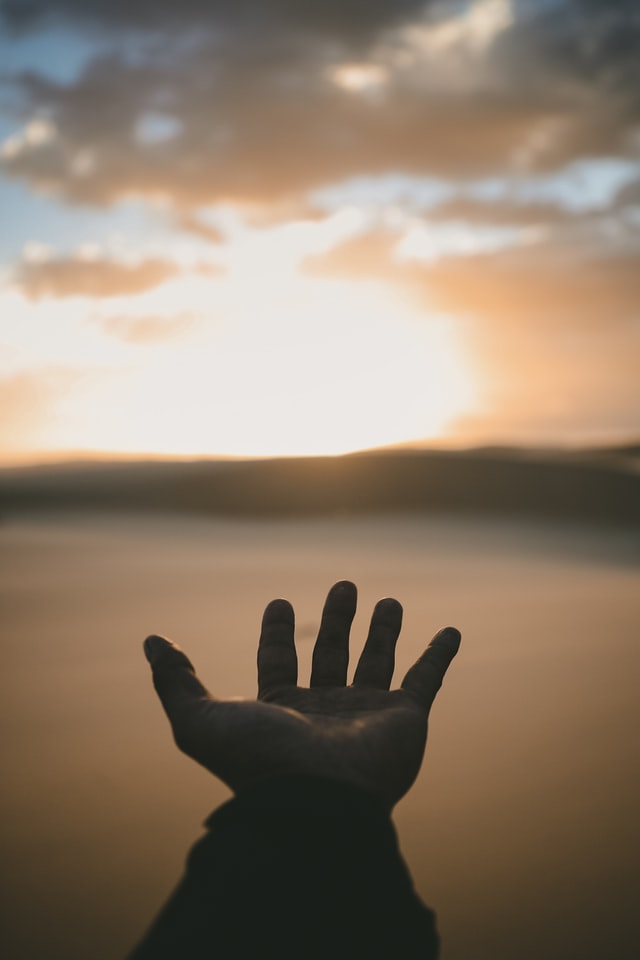 Her generosity is especially of note to unhappily married wives. Arranged marriage is common throughout all sectors of life, though less so of the poor and the immigrants, and many do not get lucky. She and Faskato are portrayed as having an immensely amiable relationship, and so (especially) women flock to their shrines.

Some pray for their spouses to love them, as divorce is a highly stigmatised practice. Some more devious and less caring hope for Haslaah to assist in freeing the one in prayer of their spouse.

Friend to those who Entertain

The Oupii are (as a group) worshipped by entertainers and artists of all stripes, whether they are affluent or unfortunate. Girls lucky enough to receive a decent education often learn her hymns as a way to pray for luck in their musical endeavours.

Her place in the Pantheon

“Earlier versions of the mythology rarely cared to note (if it was even present) [Haslaah’s] flute associations. The flute is an object of the divine, the way [Dyshe] and [Shau] call to their command their hounds, the winds or the rains. Even [Zaab], mother of the lands, cannot promise away an instrument crafted by husband for his two bastard daughters. Her flute association comes much later than her Oupii characterisation, especially as Faskato plays a larger part in the Ugane’s religious beliefs.”
— Part of an anonymous essay, The Wives of the Forgemaster

Haslaah’s place in the pantheon is ever perplexing to scholars. At the same time, she is a wife of Faskato - a role filled by those great goddesses. Yet, she is also an Oupii, minor by nature. Whether the anonymous scholar’s verdict is correct or not, such a divine domain would not be given to the daughter of an insignificant pair of gods, granted fertility as a thank-you. 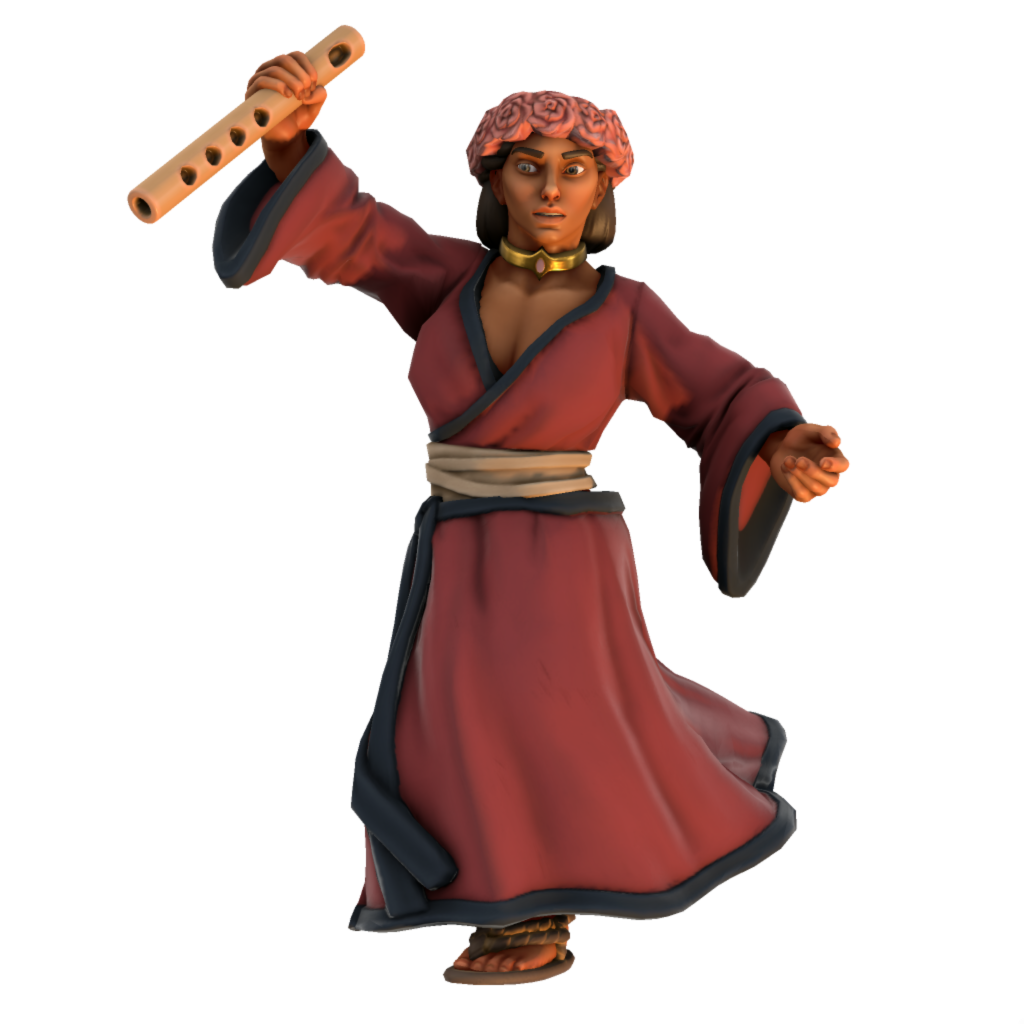 A Hymn to the Oupii

In the grand chambers of Pfax Zaab.

Through the maidens of song, spirit and history,

There are chanters and dancer upon fair lands,

To whom preform for their kings in merry glee.

Contented are those whom the Oupii adorn with their bountiful affection,

With sweet words coming from their worshipper's ruddy lips.

Hail to them, talented maidens!

Give affection to my song!

Once more, I shalt remember you,

And give to you another song also

Nice article! Their courtship sounds sweet! Did they do anything special to try to seduce each other from a distance when they realised the other was paying attention to them? :D 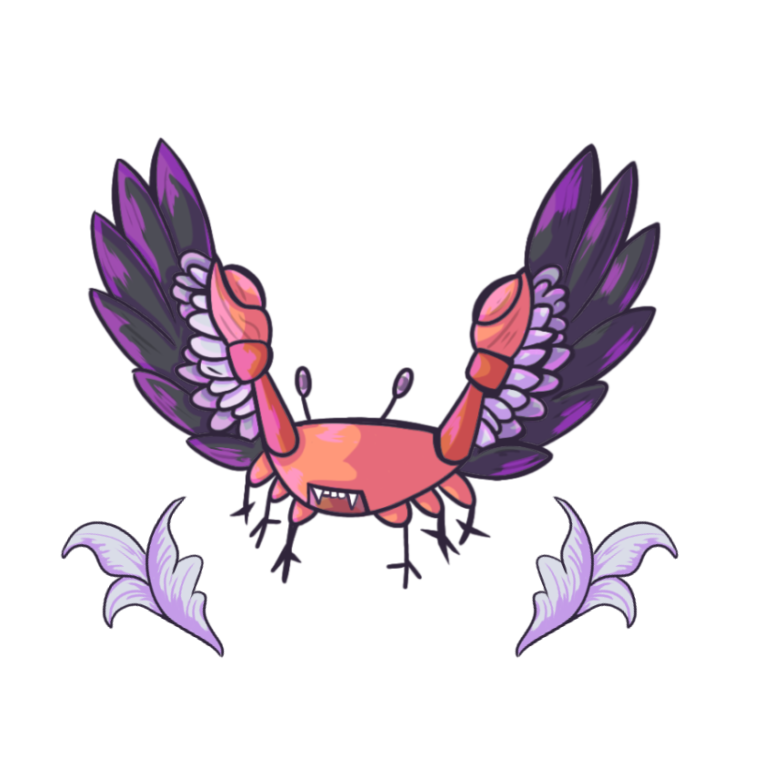 Thanks Amélie! I now have added their gifts into the article. Sorry I didn't get back to you quicker. I took the rest of the night off! Have a lovely day!

The Crab God compels you to check one of the many projects I amuse myself with, Xharan!   Or would you be so kind to check out my dear bard?

The scripture starting off the article is just beautiful. Does the godess also have any priests or rituals associated with her worship (though as you note it is largely private). Maybe people build house shrines? It reads like an interesting pantheon for sure.

Thank you, for your feedback mashd! I never really considered Haslaah's worship outside of the home, but now I have added a few paragraphs in about it! Hope you have a great day/timezone!

The Crab God compels you to check one of the many projects I amuse myself with, Xharan!   Or would you be so kind to check out my dear bard?

Goddess of the bards. I like it! Also this is a fun new world you added. The other language script for the quote and a translation was a cool idea. I enjoy your narrative snark peaking through too:   "But it is neither here nor there." referring to myths of the gods and   "coming to and fro from the great forge that bears his name." with the by Heroforge picture underneath and written on World Anvil - those were fun possible references even if it is an in world forge name too.

Ah a goddess of music always strings a few tunes in my poor soul. Courtship over distance must be a difficult thing and I'm happy that they had the chance to arrange their marriage. I would pray to her, not only in hard times but everytime because music is a balm for the soul.   Thanks for this great work. :)

You want to hear the voice of fire? I got you covered with my actual entry to the bard challenge: Amara Silverharp.

Nice read! Also interesting to learn more about a god of music and especially one that is also known for other things. I like how people see her relationship as a goal to stirfe for and try to gain her blessings for their own love life.

Interesting article. I enjoyed the scholarly musing about the more unknown parts of Haslaah's story.

Lovely and complex character, plus I love that she is shrouded in mystery. There are places that I didn't understand right away as the form was a bit complex, like the anonymous essay about the flute. Was it the flute that belonged to Haslaah or that Haslaah was the flute crafted by Faskato?   I like the small hint of "art being born in pain", which is taken literally in the myth.

It's great how this bard has developed. You could almost follow it live in the channel.   I find it very interesting that, like my sparkling deities, the Oupii are lesser deities in your case too (okay, apart from the mother, who counts as one in my case). Apart from that, I find the relationships between the gods really well worked out in your work. This also includes that you go into more detail about how and by whom they are worshipped. I actually forgot that with my deity of music, in contrast to earlier deities, and I have to rework it. Anyway, all that really brings her to life. And the addition with the unresolved place in the pantheon in the eyes of scholars is like icing on the cake. Very nice.