Many rookies often smirk at these ancient weapons. Why use arrows when modern rockets can be fired instead? That smirk is quickly replaced with shock and disbelieve when they see the devastation these hails of pure death and horror bring.
— Commander Kwok Min-Gyu

The company has been in service of the Legion of Glory for more than five centuries. As such it is one of the oldest still operating companies in the legion. Although the company has seen many modernisations the core artillery weapon remains the Hwacha.   The company is a highly effective and respected formation and brings death and horror to their enemies. The launchers can fire hundreds of arrows per hour in a devastating hail of death and horror. The applied curse magic further destabilizes the enemy lines. After a few rounds, the Hwacha go silent as their arrows are rarely immediately fatal.   This is the time when an assault team of heavily armed berserker takes to the field and slaughter the disarrayed survivors. In the wake of the berserkers come the salvagers who retrieve arrows and metal weapons and armours from the corpses to resupply the arrow factories.   Several generals have attempted to replace the ancient technology with modern MRL systems, but each time the replacement proved to be less effective.

The company is deployed in the Fortress beyond the Hell Gate in Queens. There they protect the east wing against the advancing demon hordes. They cover a total of 800 meters of walls. They are supported by several berserker assault teams.   The company has been active on this wall for more than 100 years. During this time only once did the hordes manage to actually climb the walls. This assault destroyed several of the Hwacha's and caused more than a hundred casualties.

At full strength, the company is 2500 soldiers strong. The majority of these soldiers are involved in supplying and recovering arrows for the Hwachas. Each Hwacha is maintained and run around the clock by a rotating team of around 40 siege engineers and support staff. Many are veterans of Korean descent.   Each Hwacha is also supported by a small group of shamans who maintain horror curses on the siege weapons. These curses are then applied to the arrows for a contagious effect once the arrows hit their targets.

The company runs a total of 450 Hwacha's. Between 80 - 90% are active at any one time. The inactive weapons are repaired or modernized to ensure that they keep working for a long time. The soldiers themselves wear standard legion uniforms and equipment. The siege engineers carry specialized tools with them to ensure smooth operations. The high quality arrows are a mix of titanium and steel alloys.   Both the salvage and assault teams carry protective charms with them to prevent the curses from affecting them. 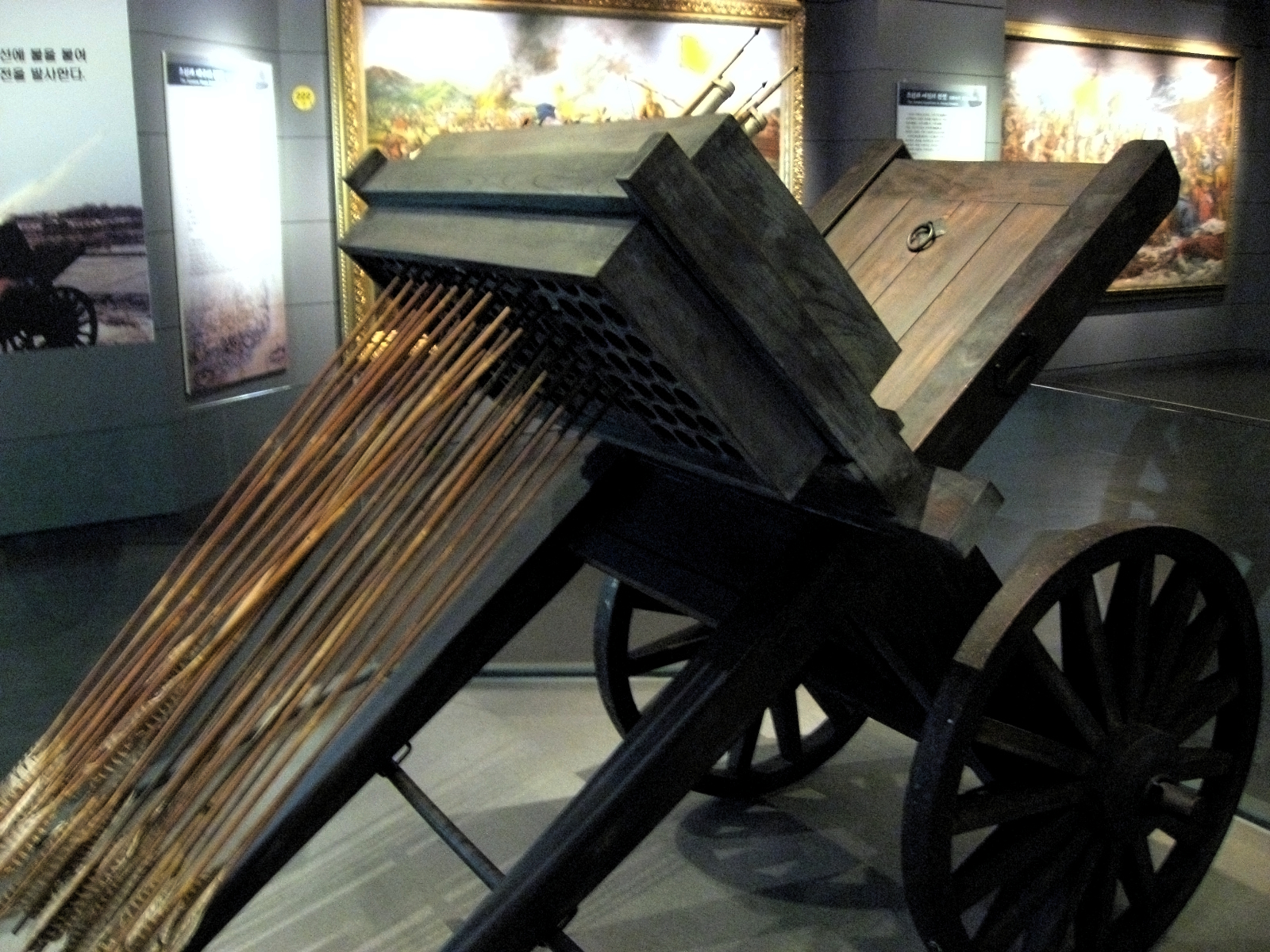 The salvage teams can recover about 60 - 80% of all fired material. The rest is re-supplied as raw materials from Earth. When there is a short supply any kinds of metals will be used to create the arrows. There are several furnaces and forges which can produce more than 5'000 arrows per hour.   Although this is a fairly expensive division to maintain it has proven to be much easier to keep producing arrows than modern rockets and other types of projectiles due to their simplicity. At the end of the day, the Hwacha can even simply fire rods of any kind of metal. They won't be as effective, but still, be able to decimate the advancing demon horde.

The division has seen many rounds of modernisations during its centuries of deployment. The Hwacha started with mostly wooden frames and arrows and simple mechanisms. The firing mechanisms were unreliable and prone to damage the machine.   Today various titanium alloys and other high-quality metals are used to make the frame. The firing and targeting mechanism is run by software and attached to high precession radar technology.
Legion of Glory
In response to the prompt Describe a military unit in your world that is famous for its unique ranged weapon.

All covers are from Unsplash. Unless otherwise specified.

I'm a sucker for this kind of historical tech usage. If it ain't broken, don't fix it.

Thank you! This is really my first time writing about anything military so I am glad it did at least something right :)

I've never heard of the Hwacha but they sound terrifying to face in battle. I love the twist you've put on them with the curse magic. Really cool formation. :D

Yeah, I would not want to be in the presence of this company on either side ever!

Well done here. I like how well-thought-out this is as it goes into the logistics and more specific elements. I love me some fine detail!

Thank you Dylon!   To be honest I was fairly surprised how well this article turned out. Took me quite a bit of research to figure out stuff.