Like a kettle of raptors, the squadron of Darts circled above the dark clouds, lit only by the moon's silver highlights, waiting for their signal to dive.

And with one word, the lead Dart nosed down, one-by-one, the rest dived too. Their thunderous NovaStorm engines glowing against the clouds around them, igniting the sky with colours of plasma.
As they burst forth beneath the clouds leaving long trails of vapour behind, the first craft fell silent. Though for all behind it, a chest-thumping boom rocks their body. And for the last Dart in the kettle, they'd be forgiven for thinking that the lord-of-thunder themselves had arrived to dish out vengeance, for they hear boom after boom in quick, arrhythmic succession.
— Excerpt from:

The RD-76 Dart is an Imperium Coalition multi-role craft capable of transatmospheric flight. This has enabled the Dart to become the standard dropship for all three branches of the IC. The ICAV, ICDF and ICSC all field this craft consistently in a variety of operations due to its speed and versatility.   Designated RD-76, meaning Rapid Deployment, model 76, the Dart is capable of reaching supersonic speeds when in a nose-down dive within ten to twenty-seconds. Because of its supersonic capabilities, the Dart could deploy its cargo to the ground in roughly two-minutes from its refuelling altitude of around fifty-kilometres, thus, the Rapid Deployment name.

The cockpit of the RD-76 utilises an electrochromic transparent metal, appearing completely opaque from the outside whilst being transparent on the inside whilst powered on. This has proven to be highly effective at protecting the pilot and co-pilot from small-arms fire. In addition to also helping with visibility in bright environments as the pilots are able to dim the interior making their consoles and HUDs easier to read.

The wings of the Dart have a maximum overall rotation of eighty degrees, or forty degrees in either direction. This movement significantly increases the ship's manoeuvrability and agility. Additionally, blended split winglets are integrated at the wing tips to reduce vortexes, reducing the overall drag of the craft.

The RD-76 Dart was designed with vaccum flight in mind. The cockpit is sealed separately to the transport/cargo area, allowing for the transport area to be depressurized without affecting the pilots.   The side-doors operate on a horizontally sliding mechanism that then pushes the door outwards, aligning it to the rest of the vessel's body-lines and creating an almost seamless fit. The door-guns are mounted on a mechanism within the cargo-bay that allows the weapon to retract inwards without interfering with the doors.

The RD-76 has room for up to eight seated individuals within the cargo/transport area, nested before the two door gunners. This translates to two rows of four forward-facing seats, whilst the door-gunners get a seat each that is on a curved rail. This allows the gunners to face-outwards when at lower-speeds or sit back and face-forwards when at higher-speeds. 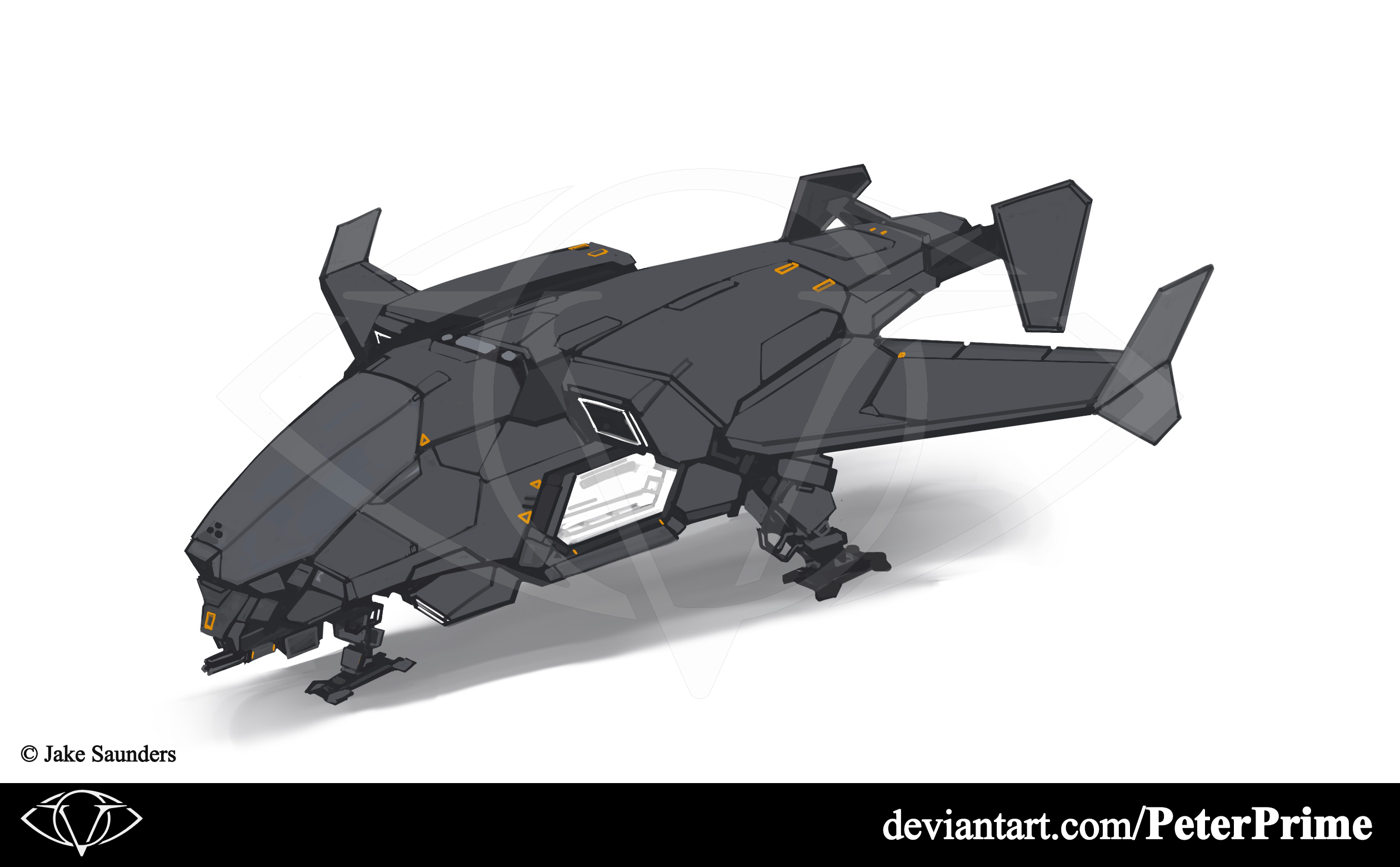 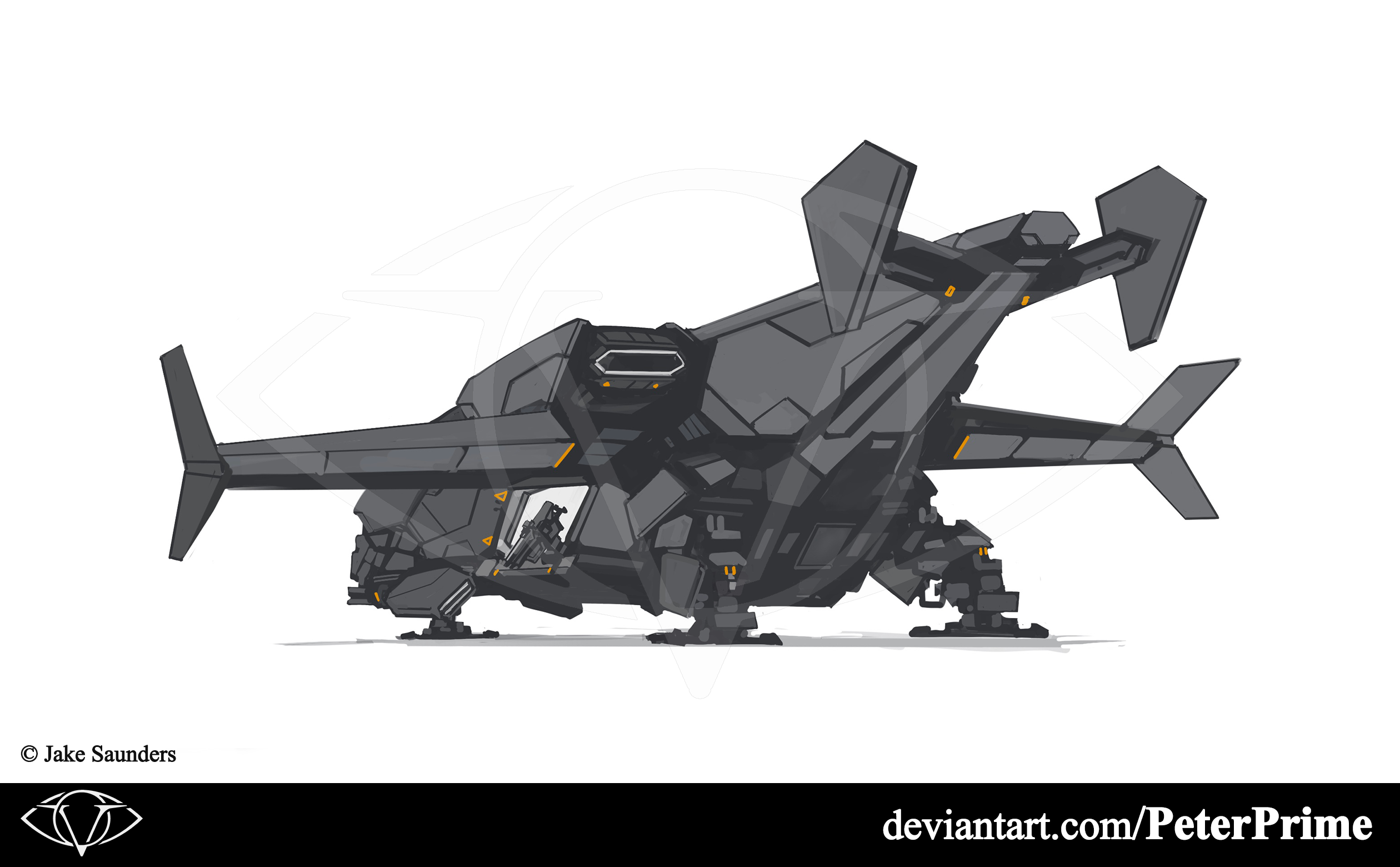 Whilst the twin TA-42 engines are capable of flight in both atmosphere and vacuum, the Dart Dropship does not carry enough fuel to leave Errack's gravity and as such, needs to be refuelled at the boundary of the stratosphere, just below the mesosphere.

You see those two TA-42s there? You know why they call 'em NovaStorm, right? It's because they burn like those relativistic jets you see coming out of black holes.
— ICAV Engineer

With the TA-42 engine's thrust vectoring nozzles the RD-76 Dart is able to perform various manoeuvres that would otherwise be impossible. The rotatable wings further amplify this effect. Thanks to the combination of thrust vectoring nozzles, rotating wings and the twin VK-10 front thrusters, the Dart is easily capable of stable and manoeuvrable VTOL.

The KW-42 or KampfWerkzeug, meaning Combat Tool model 42 is a tri-barrel, chain-driven, 35mm auto-cannon, chambered in 35x228mm. It was deemed necessary to provide three barrels for this platform in order to prolong the life of each barrel and reduce heat soak in the chamber when firing caseless ammunition. Thus allowing the weapon to fire for longer periods of time without needing to cool down.   This auto-cannon is fitted with a dual feeder and a mechanical toggle to switch between the two. This allows the operator to fire one type of ammunition then quickly switch to another almost seamlessly.

The mk.82 is a 12.7mm machinegun designed to fit within the RD-76 without impeding upon the troops it is transporting but still keeping maximum effectiveness. It is a down-sized variant of the larger mk.66 Judgement, which comes fitted with a seven-barrel design - one for each of the Nadirs, opposed to the three-barrel design of the mk.82. As well as its much larger calibre.   With a rate of fire of 1,200–1,300 rounds/min, the mk.82 devastates infantry and light-armoured targets alike with it's UVc rounds. Providing air-support and/or cover for ground forces.

All rounds used by the Imperium Coalition are either Cased Telescopic Ammunition - CTA for short, or, Caseless Ammunition - CA for short. As such, ejection ports are still used on all weaponry for the purpose of clearing dud rounds in the case of CA ammunition or for clearing the case of a CTA round.

35x228mm CTA High Explosive Squash Head rounds, these are often reserved for harder targets and are equally effective at being anti-structure as well as anti-armour rounds. Creating high-pressure shockwaves and shrapnel upon impact.

35x228mm CTA Airburst rounds utilising electronically programmed charges to adjust detonation ranges. This allows the airburst round to penetrate thinner targets and then detonate once on the other side, or, detonate at certain heights above a target for maximum effectiveness.

12.7mmx99mm UVc CA rounds. This caseless ammunition contains a small explosive charge and a mixture of dry chemicals that, upon detonation, burn at an incredibly high temperature whilst creating intense UVc light.

The RD-76 Dart is the fastest and most reliable rapid ground-force deployment vehicle Errack has ever seen!
With its superior route-planning, assisted flight-model and lethal armament, the Dart is able to fly faster, land faster and even navigate complex obstacles faster. Before, our troops were at a greater risk in urban environments due to the low flight-speeds required for safe manoeuvrability. Now? Our AI-assisted navigator can predict obstacles and keep our people moving as fast as possible, keeping them as safe as possible.   When it comes to air-support, the 35mm cannon is larger, is accurate over longer distances and makes more of a splash on detonation of its rounds. Lets not also forget the new mk.82's! Designed after their larger cousin the mk.66, these new tri-barrel machineguns can make quick work of any hostile forces.

With the new twin TA-42 "NovaStorm" engines, the Dart is capable of suicide-burning (hoverslaming) at incredible speeds and low-heights. This manoeuvre, whilst not necessarily fun for the crew or passengers, guarantees the minimal amount of exposure to AA weaponry. A technique previously thought too risky to be attempted in a combat-zone is now possible thanks to new technology and this craft's design.

The Ebonstorm and its pilot are legendary among ICAV air cadets and veterans alike. It is rumoured to have literally gone through hell and back, flying in unbelievable conditions and returning home safely against all odds. Its pilot, Eryn Kindrick and co-pilot Ashton Palmer are just as remarkable, during one of their missions, they successfully navigated the collapsing towers of Etterlen, narrowly avoiding falling debris, gunfire from cultists and suicide attacks from flying variants of Underlings called Boomshrikes, amongst a whole host of other threats.
The Pilots were able to fly into the city, rescue a fire-team that had been deployed to the area and then fly out of the city within minutes. Sustaining heavy damage to the Ebonstorm, but not enough to stop her flying.   The Ebonstorm has many more flights under its collar, some of which would even make the towers of Etterlen pale in comparison. Some folks have even been found silently praying that the dropship assigned to their units are this famed Ebonstorm

Renowned for its high kill-count and patch-work repairs, the Iron Viper has taken more hits and survived to fly again than any other RD-76 in the ICAV fleet. Like a scarred and disgruntled old veteran, the Iron Viper has risen time and time again to transport ICDF units and devastate enemy forces.
Unfortunately, several pilots have flown the Iron Viper, not all of who returned home. But, almost all of the people being transported have survived with minimal injuries.   Marred with welds, blast marks, miss-matched colours and adapted parts, the Iron Viper is easily identifiable in the hangars and air bases of the Imperium. Oftentimes having its designated area decorated by other ICAV or ICDF members as a sign of respect.