A cloud of brilliant blue smoke filled the room as I entered, enveloping the vises, saws, and other tools completely. Then a series of bullets flew between my legs and a low voice growled from somewhere within the cloud.   "You best be here with work, 'cause I ain't kind to thieves." I would discover later that the gun fastened to the door was to be used to announce my presence, as the old smith's hearing had dulled over the years.
— A novice saawkamut

Gunsmiths are highly skilled individuals who create firearms primarily for saawkamut, but do occasionally take work for militaries, churches, and other parties of weak spirit. 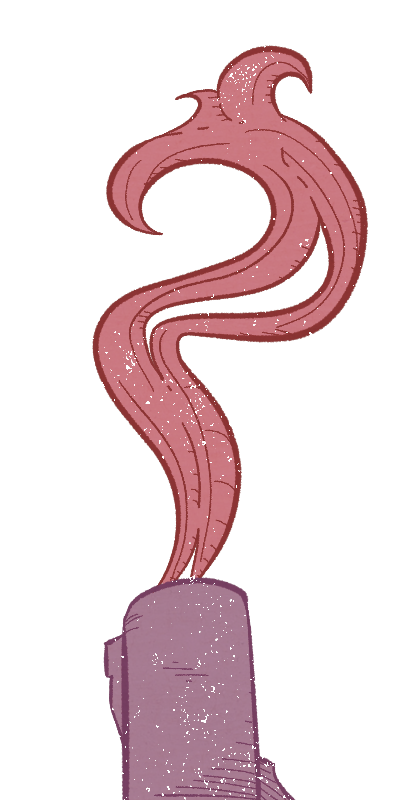 Gunsmiths are few and far between, as the amount of knowledge, skill, practice, and strength of spirit required are quite high.   Novice saawkamut are often tasked with finding and meeting with one in order to receive their first gun. Often, these first guns are simple— six-shooters, lever-action rifles, double-barreled shotguns— few smiths can entrust something truly special to a saawkamut who may find themselves face-first in the dirt come noon the next day.   Not to mention attitude— if a saawkamut waltzes in asking for a gun to best kill fleeing innocents, they'll be turned away if not immediately shot at— at least by most gunsmiths. However, once a saawkamut has proven themselves to be capable and gained the trust of a smith— they can request custom-made guns.

Now this, this is something real special-like. D'ya see how they splits in two pieces? Spellslingin' wit' this should be a real treat t' see. Yer gettin' two guns n' one here girl, as ordered.
— A satisfied gunsmith

These custom guns range from things as simple as double barreled six-shooters, six-shooters with scopes, six-shooters with knives attached (six-shooters are quite popular), to shotguns with uniquely-shaped barrels that split spells and reform them before splitting and reforming them again— creating super-charged spells in the process, rifles which shoot wooden stakes instead of bullets, or revolvers disguised as false teeth. A saawkamut's gun will sometimes find more fame than the wielder themselves. 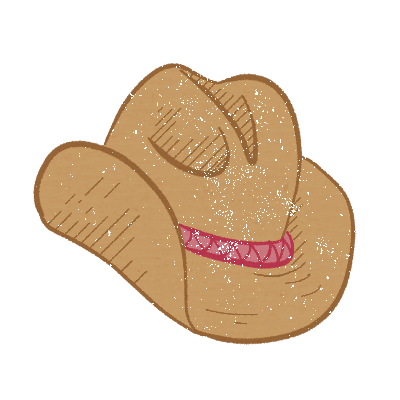 To become a gunsmith, one must first become a saawkamut. Hopeful gunsmiths must possess the same powers as their future clients in order to create the best weapons they can. After this, one must then learn the trade— either by becoming another gunsmith's apprentice or through rigorous research and practice.   Finally, a gunsmith is rarely seen as such until they learn to enchant, or more accurately— graft spirits to guns. a process completed with many different potential methods, each difficult to master on their own. Guns must be enchanted, in order to carry and enhance spells through them. Otherwise they are merely hunks of metal. Only when this is achieved will they start to be taken seriously, many will spend years attempting to master this process before throwing away their tools for good.

Gunsmiths spend much of their time locked away in their workshops, if not deep in work, they're likely to spend their time tinkering and honing their skills. Workshops take many forms— as unique as each gunsmith that builds them— but they all rely on similar tools. Forges, bellows, vises, hammers, magnifying glasses, pins, pliers, lathes, gouges, bandsaws, and more. Many will utilize specialty tools that rely on their magical abilities such as sanding sticks— rough, cylindrical files placed in a handle, which are rotated with magical energies. Some with especially strong spirits will attach small saws to these, for careful, detailed cutting.
Gunsmiths who wish to create weaponry that's as beautiful as they are deadly must also be skilled woodworkers, filling their shops with planes, chisels, and axes. Some learn to detail their metalwork, with chemicals for etching, and sharp implements heated with their magic for engraving.   Stored alongside these various tools are often dizzying arrays of metals, woods, and other materials. Gun barrels, handles, springs, pins, casings, and other components are often pre-built or abandoned throughout a shop, cluttering shelves, workbenches, or neatly packed away in drawers. 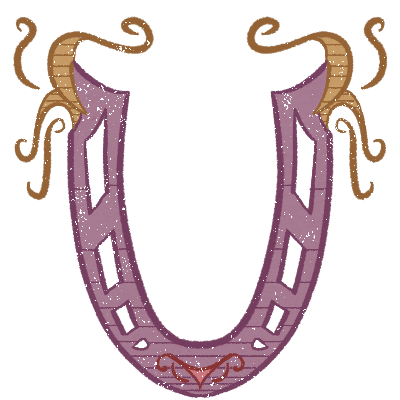 Sleepless nights are not uncommon, as matters of life and death are often hinging on the quality of a gunsmith's work.   Not all are made to handle this pressure, and some may quit shortly after finally becoming a gunsmith.   Those who remain, however, are often dedicated, hard-working sorts. Many sustain injuries throughout their careers, either due to lack of sleep, simple mistakes, or freak accidents.

A gunsmith without a bullet wound is nothing but a novice!
— A blind gunsmith

Alongside their usual work, gunsmiths will sometimes spend years creating especially powerful, unique firearms as personal projects. Masterworks, or so they'd hope. It is not uncommon for a gunsmith to die before completing their magnum opus— their work either being lost, passed to their apprentice, or stolen by another gunsmith.
Type
Arcane
Other Associated professions

Yot, who's name literally means "crazy," is an unhinged gunsmith with a penchant for creating truly bizarre firearms.   Examples include the "Revolving Revolver"- a revolver with eight barrels in a radial formation which can be spun rapidly, and "Gunblades"- which, despite their insistence on the matter, do not "vibrate when bullets are fired."

Who gave this child a gun?
— A confused saawkamut

Piwqu is a young girl who has, somehow, managed to become a notable gunsmith. Her often sweet attitude and unassuming appearance hide a sadistic personality, and her creations are utilized by often unsavory saawkamut— typically grizzled loners who are uncharacteristically sweet in her presence.   Examples of her work are those such as the "Acid Flower"- a small revolver which applies burning acid to spells fired through it, and "Midnight"- which envelopes the wielder and target in darkness when fired— best suited for assassinations.

It's beautiful, but what I can't understand is— how?
— An amazed saawkamut

Ahyona's specialty is creating purely wooden guns— exactly how he manages to do this is a well kept secret— one several have died attempting to steal. He has numerous wooden limbs which he moves with his spirit, a feat which takes incredible strength to pull off on such a regular basis.   Examples of his work include "Sprout"- a shotgun which converts spells shot through it into "seeds" which don't unleash their full effect until embedded within or near a target, and "Wild Leaf"- a rifle which causes spells to fly around in random patterns before reaching their target— like falling leaves.

This gun was made for me. I mean, in more than the literal sense.
— A surprised saawkamut

Yiiptak chooses her own saawkamut— no one can ask her to make a firearm for them. She asks for no payment, simply appearing before them, gun in hand. Each of her firearms is perfectly suited for its wielder, as if the old woman can see into their spirits.   Examples of her work; "Faithful"- a bent rifle with a sharpened barrel, which can be thrown like a boomerang— always returning, and "Starlight"- a shotgun which is said to shoot a field of stars— in truth it causes every spell shot from it to shine brightly, blinding targets.

“A cloud of brilliant blue smoke filled the room as I entered, enveloping the vises, saws, and other tools completely.”   I love the opening quote, it sets the stage beautifully! I do wonder if the sentence here could be a little less complex in its structure. It took me a moment to realize that the “I” wasnt enveloping the series of things and it was the smoke. Up to you though.     “their insistence on the matter, do not "vibrate when bullets are fired." im not sure what you mean here. Who is “their” and and why would they insist this?     “...often unsavory saawkamut— often grizzled loners who are uncharacteristically sweet in her presence.” you use often twice here, maybe remove one or pick a different word to avoid the repetition   revolvers disguised as false teeth.”   Now…. im gonna need more info on dis here cause im just dying to know! “simply appearing before them, gun in hand”   I really like the mysterious lone stranger vibe and to be honest i think shes my favorite.     I love how you go into such detail with the workshops and the tools of the trade. It's such a cool idea, and you do so well in explaining it. So wait, gunsmiths try to steal each other's work?! I'd be pissed. How far does that rabbit hole go? Are there extreme rivalries between them?       As always it's fantastic. I'm loving this world with every article. Thus far this is my favorite though. It's easy to picture the workshops and the endless possibilities when it comes to the strange weapons made. Excellent work.

I like the quote as is, thanks though!
"Their" is the crazed gunsmith, who the paragraph was speaking of— using their pronouns. The gunblades vibrating is a dig at Final Fantasy gunblades, which were explained to be not totally useless because the bullets made the blade vibrate and thus cut through things easier. It's a joke, is the short of it— albeit a somewhat specific joke.
Good catch, I've changed the second "often" to "typically!"
I'm debating how to approach articles on the guns. They really don't have enough meat to have their own articles. (Ok, SOME will, but very few) For the specialties like the teeth I may have to tie them to specific saawkamut and include sections about them in their articles. Or, just have a big 'ol list article, but I do kinda like the challenge of having to make characters to go with each...
But then I may write too many gun ideas! Doing BOTH may be the best option, we'll see!
Glad you like her! I tried to make them each to be unique so I can really have fun with their articles soon. (Debating how to approach that too, as some are from countries and cultures not yet written— and that context is important!)
100% there are going to be rivalries. Battles and perhaps wars may have been fought on occasion over powerful guns. I just...need to remember when I get to writing them out! I could have a ton of fun writing some prose over one of these feuds, or people fighting over a masterwork.
Glad you're enjoying it! This was my favorite to write for Umqwam so far too, just laidback fun— which is what I had made this world for to begin with! And, I also got to utilize some of that knowledge from my hours spent watching wood/metalworking videos for once!

"But then I may write too many gun ideas! Doing BOTH may be the best option, we'll see!" You can never have too many of what you love writing I say! however you do it, its gonna be amazing. cant wait. ooooo gun wars! yessss and the potential for the rivalries... yessss im excited. I really am, this is a great world that has sooooo much to have fun with.   hey gotta use those vids for something. XD i know the feeling all too well. Till next time my friend!

I like how you include notable gunsmiths in the side panel. Fun read.

Thanks! Glad you enjoyed it! I didn't think about adding them ahead of time but I REALLY want to write out the full articles for them sometime!