The ecumenopolis of Lutetia has long-ceased pretense of being a planet, though it retains the shape and orbit of what it once was. Instead, Lutetia is mechanized from the core outward.

Only the wealthiest of the wealthy, living in the highest point of the city rings, have ever seen the stars.

There seems to be no end to the depths of the world as one climbs down into the lower levels of its sprawl; likewise the heights and rings of the planet-sized city spiral upward in layer after layer of industrialized urban life.
Natives to Lutetia have no basis for the concepts of "grass", "lake" or "ocean". 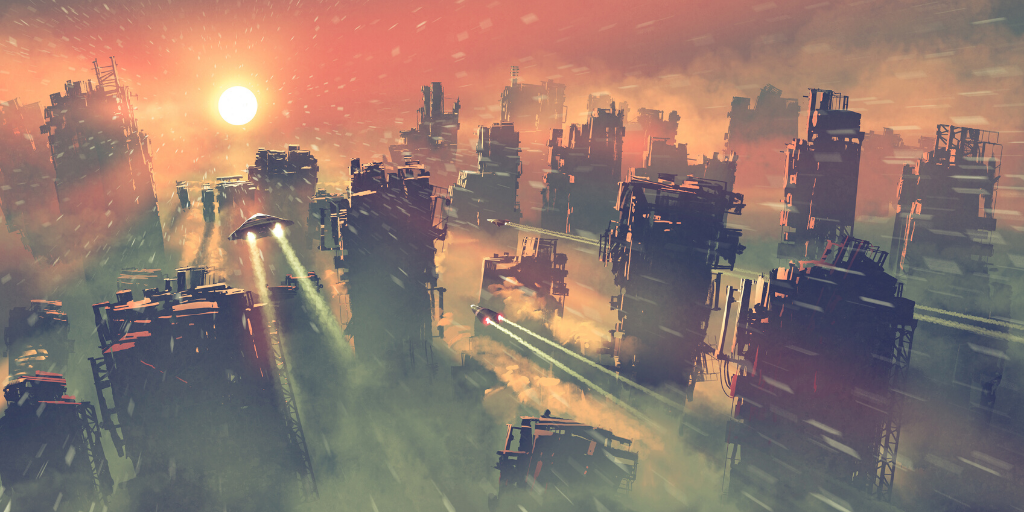 Artificial Intelligence (AI) has long since denied even the most determined tech professionals the possibility of mimicking human variables of choice. Most AI, then, consists of human-programmed machines who work in structured patterns, such as industrial or mining mechanims, cleaning and security mechanims, and even the toy mechanims popular with both adults and children. Each type is designed to react to specific parameters, rather than initiating action itself. AI return home if parameters are discovered which disrupt their patterns.
AI's limitation was coupled with the disgruntlement of the human workforce--the overwhelming majority population on Lutetia and its mining outposts--making it a less favorable investment. Most companies on Lutetia are slowly getting out of AI construction and moving to more lucrative fields.

As AI was largely abandoned, the rise of biological and technological improvements to humans flourished. With outsourcing to a mech who could replace a job, and income, meeting backlash from the human workforce, the next step was simply to make better workers who already came with a complex, multi-faceted brain. Enhancements range from brain implants to embedded tools to bionic limbs or hardened skeletons and beyond. Most humans on Lutetia at this point in time have at least one type, whether legal or not.
Extreme levels of enhancement exist. Entirely mechanical bodies with the former human's brain wired in are known as the Augs.

Players will be able to choose the Street Rat character and play through their interactive fiction backstory set on this city-planet. Players who choose a different starting character can come to Lutetia later via To Do List missions for the Scout profession choice.

Care of the Masses

Sounds like an interesting adventuring location :D Who doesn't love a little cyberpunk?

Natives to Lutetia have no basis for the concepts of "grass", "lake" or "ocean".

That's the most interesting to me, haha! It's funny how different worlds might have drastically different concept of things, very awesome :D

Thank you Q! Yeah, the planet literally is made of buildings that they just keep constructing up and up and anchoring to each other to keep them from falling down. Fully realized resource drain as they eventually used up the whole planet lol Moved the Geo section! :D