Getting an albino child (or in The Magmer Language "dataf") is the worst that can happen to a young magmer couple. Not only do they look ugly as hell to the magmer eye, they are also extremely vulnerable.   An Albino magmer has extremely thin skin, that gives no protection at all for their skull. This means, if an albino magmer ever gets hit on the head by a big pumice, they will most likely die. If an albino magmer ever touches the surface of the Hot Sea, they will get serious blisters. If an albino magmer ever hits the rock to break a bit out of it, they will most likely break a finger or two as well, making them unsuited for all construction work that they do.   Because of the huge danger potential for albinos, many albino magmers run around with huge scars, that look like dark cracks in their sandstone- or marble-colored skin. Since the medical research of Kot is working on "normal" magmers, the albinos' fragile skin still does not have a well working cure against injuries.

It is an absolute taboo to mention the brightness of skin in front of an albino's parents, since they usually live in everlasting denial. It is okay, though, to talk about it with the albino themselves, although it is also a hard topic to talk about then.

There is a legend that, before the fire ring was born and the magmer's skin became thicker and thicker in honor of the mountains, there was once a people of thin-skinned magmer that all had a light skin. The legend also says, that the ground made a similar evolution: Where the ground is now dark and grey, it would have been light brown and green, and sometimes even fertile.

Bovada was a young dataf, who committed mass murder and suicide after 15 years of discrimination. This led to the banishment of the discrimination against dataf in Kot, enforced by The Government of Kot.

Albino magmers sometimes try to hide their scars. They do this by mixing their skin tone out of mineral colors in a very complex process, iterating and re-iterating until they get the right tone, and then applying the self made paint to their scars. 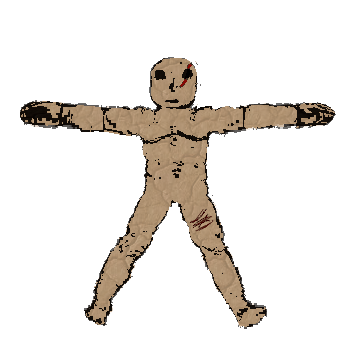