Inspired By World Anvil Summer Camp 2021: "A Vital Trade Resource That Supports a Settlement or Region"

Anubian Crystal is a crystal that has formed due to the decay of magically infused radioactive material. This crystal can only be found in the Deadlands.

It is a large and pointy crystal. It is clear with blue and purple hues. It has a faint glow that lights up a small area around it.    During lightning storms, you can find them being repeatedly struck by lightning bolts. It is as if the crystals attract the bolts to it. When struck by the bolts the crystal's glow gets stronger.

Anubian Crystals emit an aura of magical energy. The aura is a little bigger than 10 feet. Due to the aura, any cadaver that has been within 10 feet of the crystal for 72 hours will be reanimated as an undead. Undead within the aura seem to be more resistant to spells that affect the mind. A skilled necromancer can focus the aura of the crystal to enhance the power and duration of their spells.   Anubian Crystals attract lightning bolts to them. You often see them getting repeatedly struck by bolts. When hit by an electric current the crystals will light up like a lightbulb.

The crystals are used in the making of Anubian Glass. When made into glass the crystal is made into tiny fragments. Next, the fragments are mixed with flux. Finally, the mixture is melted. The resulting material is as strong as steel.

The crystal is a stable and non-radioactive material. It can be stored nearly indefinitely without losing its properties.

Anubian Crystals have many uses. These include, but are not limited to; lightbulbs, lightning rods, armor, weapons, jewelry, magic items, and power generation.   When Anubian Crystal is cut in a special way by a jewel crafter the resulting gem is called an Anubian Focusing Gem . The gems can be used by a necromancer to increase the power and duration of their spells. While used in this way the gems will still attract lightning. Thus the user is at an increased risk of death due to lightning.   Within Glow City, street lights and lightning rods are made with Anubian Crystal. The lightning rods also serve as a power generating tool during lightning storms. 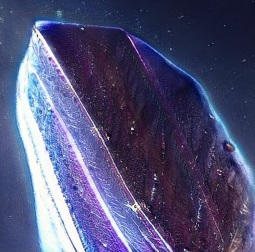 Answering: "a vital trade resource that supports a settlement or region"
Visit Dremag Kest's Competition Page Check all other answers to this prompt Competition Homepage

by macrovector and AWV
Thank you for entering the Summer Camp Material Prompt! Giving you a sticker in recognition of your excellent entry for interesting and imaginative ideas! Very fun to read crystal article!
Author of Rise: Liminal Chronicles |