The will of the pantheon within the realm of Eagrela are enacted through their followers, vassals, and avatars. One of Ignem's vassals is represented by a living construct of pulsating magma and obsidian stones that form together in a general humanoid form. A bright glowing glyph has been permanently etched into its front where a face should be as it seems to enact sight through this. The 20+ foot structure is one of the higher tier messengers to the god, as Ignem will only utilize this being when he seeks to "employ" heroes to his cause.
Various books detail interactions with this entity in tall tales and bardic poems, usually short lived but always in areas of extreme heat or volcanic in nature. Sometimes mistaken as a piece of Coraxumn, the God of Mountains and Earth, the being does have some resemblance to an earth elemental. Some will state this is simply a coincidence while others believe it is proof of some sort of relationship/partnership with the other god. 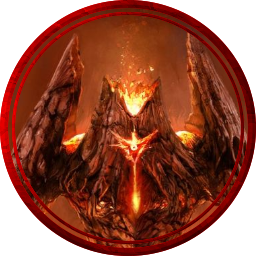 Remove these ads. Join the Worldbuilders Guild
Ignem, the God of Flame and Creation