You stumble upon a short document, seemingly extracted from a specialized journal. It mentions a large vehicle you had not heard before.

Legendary ships: the story of the famous Barkenroll 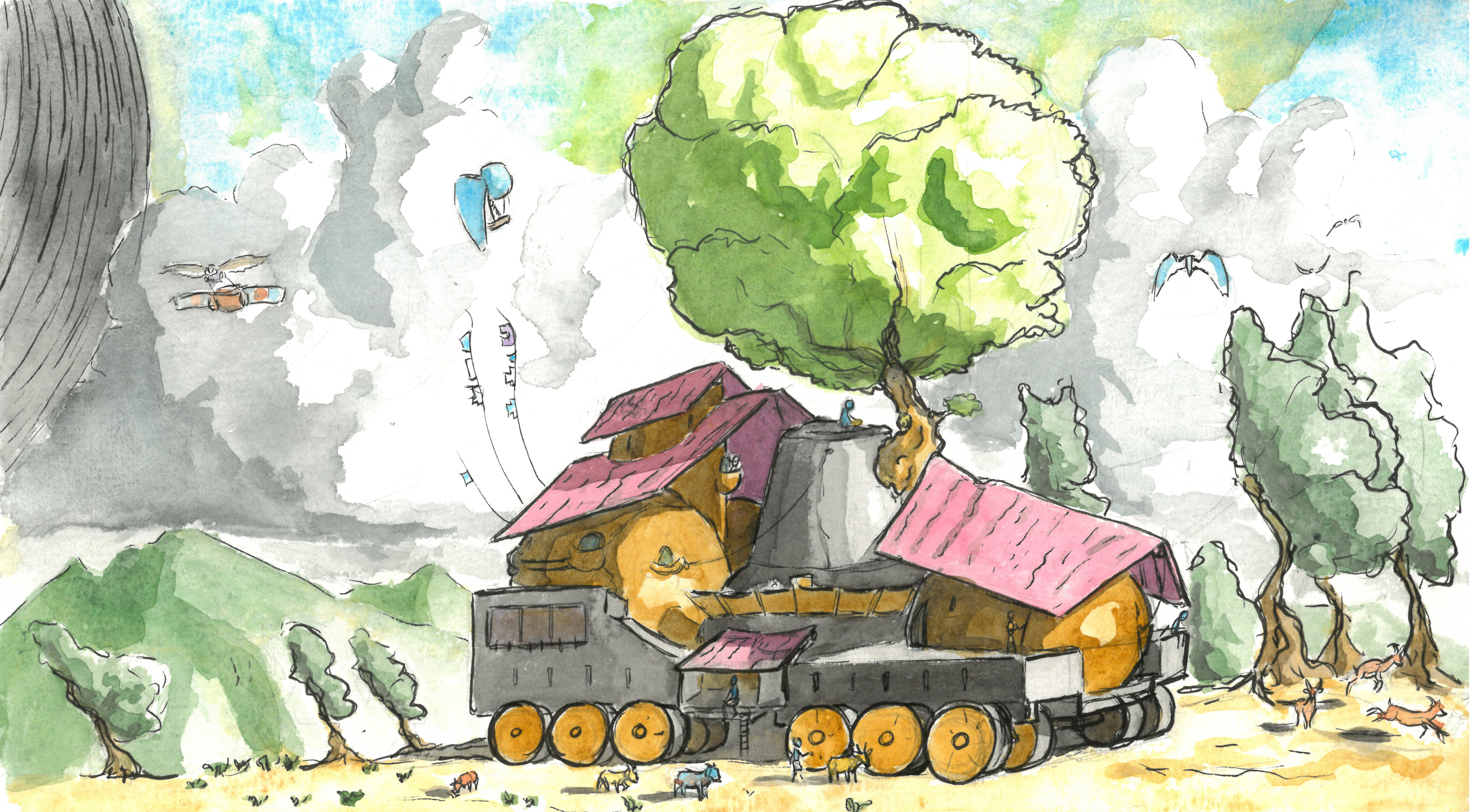 by Pouaseuille
Wandrel forts always are a sight to see. Whether they are recently built cargo holders that regularly travel across cities, or more ancient fortresses that have moved around the cylinder for centuries, they give off an impression of nobility, grandeur and power that cannot really be found elsewhere.   Still, among those village-sized vehicles, some stand out more than others. Some may be larger, or older. Some may have a peculiar appearance, or a rich history to tell. Both one of the most famous and the most mysterious landships of all, the Barkenroll is all of that at once.   In this Legendary file of the Technical Merinian, we delve on quite the beast. Stick with us for a thoroughly complete file!

As is typically the case for ancient and legendary ships, the origin of the Barkenroll is uncertain and shrouded in mysteries. Some stories say it was one of the first, almost experimental, Moving Forts ever developped by the Library. Others mention that the ship was built not by scholars but by nomads, after they stole secret librarial blueprints. Others stories still, even bolder, claim the ship simply appeared on its own: it would have crawled out of the ground, followed by its owners.   However it truly came to be, one thing is certain regarding the Barkenroll: it is an ancient fort, probably among the firsts ever created. Its Ghostpowder-based machinery is ancient. However, unlike an animal that grows old and weary or a mind that slows down, the motor didn't decay over time. Rather, it grew like a tree: stronger, bigger, and more resilient. Even in spite of its old age, it is nothing short of the largest, most modern moving forts currently built by highly militaristic Wandrel families.

While most of the Barkenroll's history is uncertain, some of its elements are almost unanimously agreed upon. In particular, its famous change of ownership. After all, the Barkenroll is best known as the "Ship that chose its own crew". According to various legends, toward the beginning of its existence, the ship was owned by a major Wandrel family, since then extinct or forgotten. Stories contradict each other a lot regarding whether the ship had been willingly given up by the Library or whether it had been taken by force: Wandrel history is, after all, filled with both internal and external conflicts of all shapes and sizes.   In any case, according to the legends, the Wandrels eventually stumbled upon a relatively pacifistic tribe of people: the Shrublins. Some say they wanted to trade in good faith, others that they specifically wanted to steal from the tribe, or even enslave them. Whatever the intent was, the shrublin's head of tribe offered trade with the family. In exchange for a temporary use of the ship, they would...

Over the centuries of its existence, most of the Barkenroll's original pieces were likely changed, repaired, or replaced. The structure of the ship was partly changed, to accomodate more both to the shrublin culture, and the large tree growing in the middle of the machine room.   Even today, the ship is still regularly observed near rural villages. Though it seems avoids overly crowded roads and large cities, the ship is regularly seen near the Great Ways in Middelia or Sheherp, where it trades with other nomadic groups. The ship sometimes even recruits new crewmembers, usually outlawed nomads or peoples whose tribe or village was destroyed.   Because of its great age, and the legends surrounding it, the Barkenroll has often been used as the physical vessel for local folklore. It has been associated with stories of haunted ships, vessels transporting the deads, and more. According to specialized scholars, it is possible that the massive motor of the ship, associated with the high spirituality of its tribe, make it likely to manifest a strong presence in the "Spirit world". Particular entities may use such a presence as an anchor, a power reserve to manifest themselves to unexpecting villagers. Such notions, however, are far outside the scope of our journal, and would be more adapted to esosteric and mystical documents.

Along with the torn document, you see what appears to be an artist's impression of the vehicle's structure. Most likely from the same journal, it provides a description of its supposed rooms and storages.

Barkenroll - artistic view
Open full size
Of course, this is an artist's impression of the ship. Very little people have actually visited the insides of the Barkenroll. Even less have then agreed to describe its structure.

Points for being on wheels! More points for the cross sectional image! I also like how your writing tells us just enough about this ancient vehicle while still keeping things somewhat mysterious.

Thanks! Glad you liked the style. To be honest, the writing was partly kept mysterious because I couldn't yet produce more information on the vehicle just yet. I suppose more may come later, should the vehicle appear in further stories.

Ohhhh, it's so cool. I love the tree in the middle - that just adds to the odd fantasy feel of it. Great cross-section too! :)

Glad you liked that art!

Nice style and amazing artwork. While i understand based on the style why it isnt included I am always curious, especially for the vehicles that people made that house a village/tribe, what the size is, either of the vehicle, or of the tribe. including either would allow people to better imagine the scale of the vehicle. However, in this case the people included in you first image do a good job. Like I said, amazing artwork.

Hi! Thanks for this comment. Indeed, I suppose the actual size of the vehicle should have been indicated, using more than simply drawing people for scale. While I cannot give you a metered scale, this fort is about as tall as 10 "Shrublins" not counting the tree, or about 8 regular Cylinder humans (or like 6 "Wandrels" nomads). It is about as large as it is tall (again, not counting the tree), and is roughly twice as long.   To give you a comparison point, the modern Wandrel Moving Forts are typically as tall as a dozen humans, just as large, and a bit longer. So, not counting the tree, the Barkenroll is shorter than average but longer than average. Counting the tree, it is even bigger than modern vehicles.   As for the number, the modern Moving Fort are meant to be inhabited by small Wandrel families of about twenty people. The Barkenroll is definitely inhabited by more than that. Though the numbers are uncertain, people expect something between thirty and fifty inhabitants: the size of a Shrublin tribe.   Anyway, I will disclose some indication of those numbers on the article!