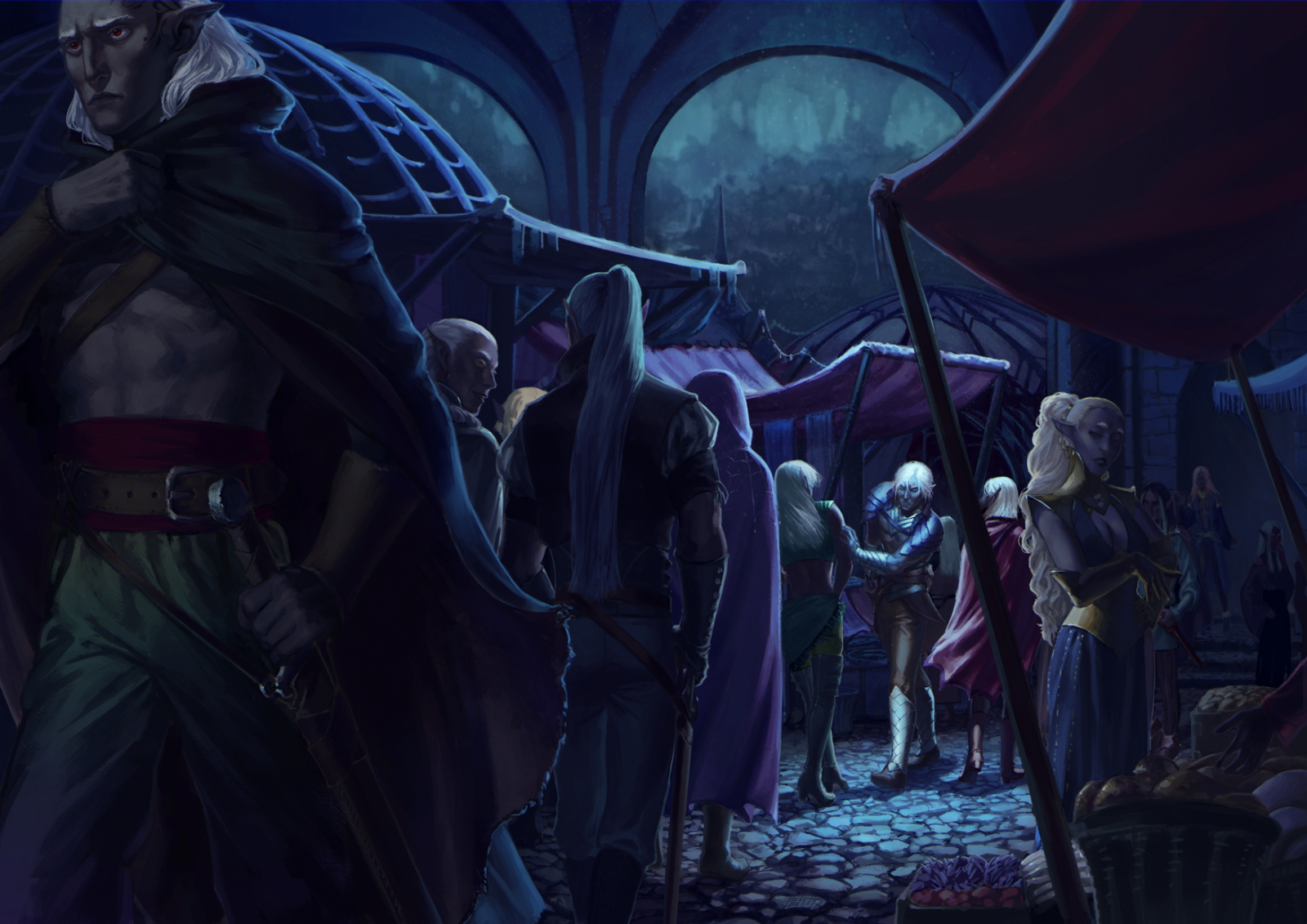 The Chronicles of Evalaw    ‏‏‎ ‎‏‏‎ ‎‏‏‎ ‎‏‏‎ ‎‏‏‎ ‎World‏‏‎ ‎‏‏‎ ‎    Underworld      The Caverns of Ameranth      The City-state of Rie'shae.      Ajmathi, The Grand Bazaar of Rie’shae.
At the heart of Rie'shae is the ceaseless clamour and bustle of Ajmathi, the grand bazaar. Merchants and traders from all corners of the underworld, and beyond, come here to trade and sell their wares. All the denizens of the city are said to pass through and shop at the Bazaar, even the House Matriarchs themselves. It is said that anything your heart desires can be found somewhere in Ajmathi.
Through the throng of noise and hustle of commerce the deafening uproar of flamboyant merchants competing with one another, their voices straining to rise above others as they heckle passers-by. The confusion only amplified by hawkers selling a seemingly random assortments of products, and street performers beguiling the naïve of their coin. The aptly named Grand Bazaar, or Ajmathi as it is known by the locals is an immense open plaza, packed tightly with rows upon rows of stalls, booths and merchant caravans with all manner of strange and exotic wares. It is said that anything your heart desires can be found somewhere in Ajmathi. Colourful arrays of peoples from all range of races, class and creed can be found here. From prominent Dral'azie Nobility in their silks and finery, to lowliest slave in little more than dinghy rags. Cramped and pressed into the swathes of people, patrols of city watchmen find themselves flustered, as they do their best to keep everything from descending into complete chaos.

Though the Bazaar is crawling with the Closh, it's the best place to make an honest living. You would never believe the things people leave in their pockets.
— Tou'Qorua, Vanneran thief and miscreant


Though the focus of Rie'shae Rie’shae is the crystal court of Ga’venn’shviie or the Grand Temple, it is Ajmathi, the Grand Bazaar, that is the beating heart and lifeblood of the city. No permanent structures are permitted within it’s limits, merchants and traders are required to move their places of business every six months, to prevent monopolies on space and promote browsing, often making it seem like some stools just up and vanish. The more permanent businesses are found surrounding the great central Plaza of the Bazaar, seemingly endless rows of shops, emporiums and boutiques spilling out into the countless narrow streets and jaunty always beyond. It is in these back ally’s that one can find many unlicensed and illicit activities.
Most races are welcome, leading the council to enforce strict laws and regulations within Ajmathi to ensure the peace is kept. As long as peace and a decorum of respect is shown to the city authorities, someone can peruse the Bazaar and buy whatever they might have desired here. It is not uncommon to findsurface-dwelling merchants and trade goods passing through or remained in Rie'shae. These rules and edicts are enforced by Ajmathi’s overseer and the city watch, who’s role is to enforce the peace, investigate trade disputes and enforce the law. Whom can frequently be found patrolling through the bedlam. 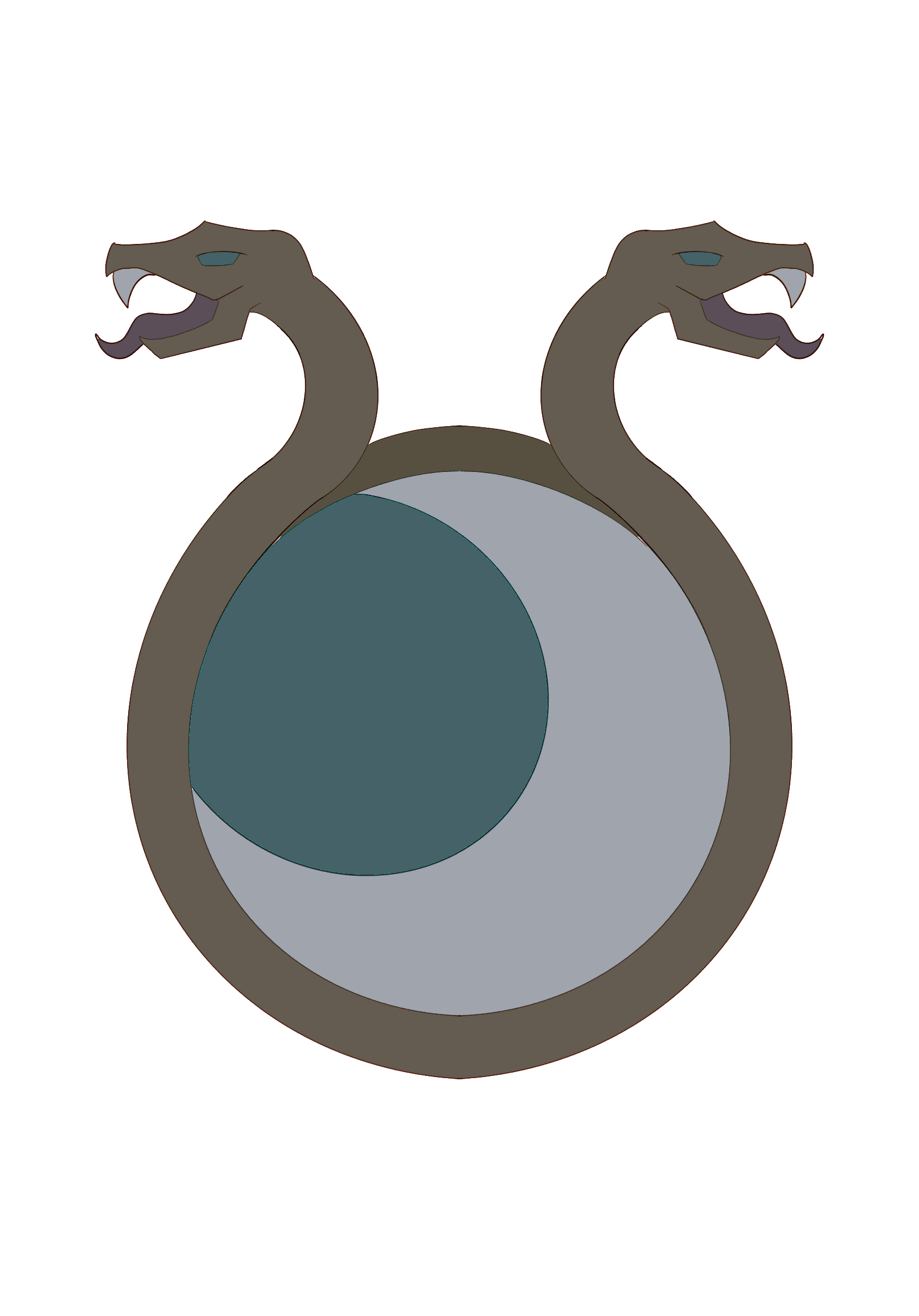 Sigil of The City-state of Rie'shae. 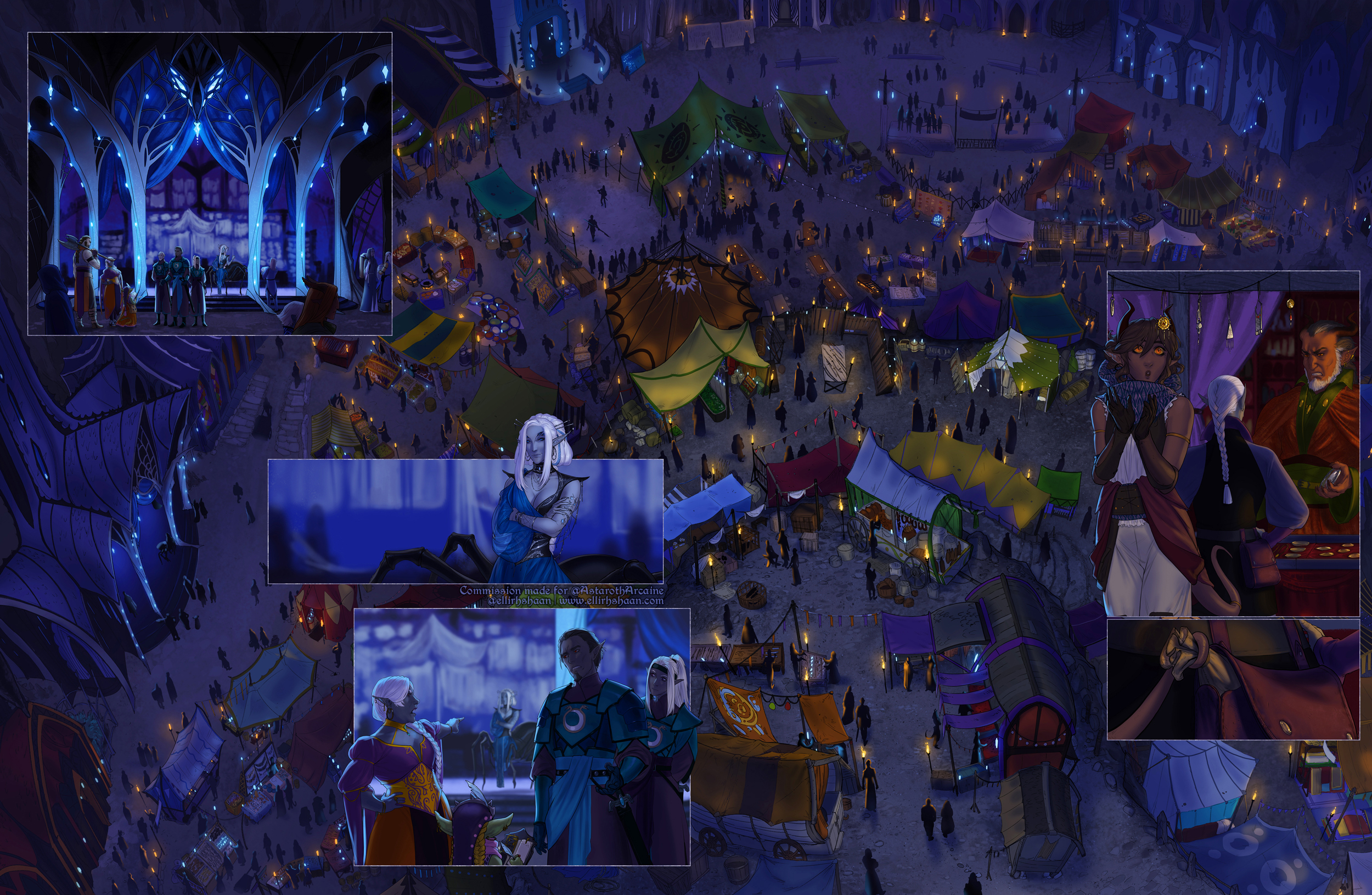 Standing pride of place among the promenade of prestigious shops and boutiques that encircle Ajmathi, is the grandiose façade of one of Ithen'drel Dai Rie'shae. - The City-state of Rie'shaes most esteemed and celebrated establishments. A traditional stone faced building in the Rie'shae style, its long arched bay windows, hewn intricately from granite, lacquered and painstakingly detailed with ornate gilded spiderwebs. Large fine silken drapes, drawn back reveal a number of the proprietors finest works, the envy of nobles and commoners alike. Its jetties overhang the street with a number of glittering crystal lanterns, framing the impressive ebony doors sat up high on a stepped porch, cast wide open, welcoming it’s patrons inside.   Once a small booth upon the Grand Bazaar, the Arachne Khalirah now runs one of a the cities most prestigious boutiques on the inner ring of the Bazaar. Being a prolific and celebrated seamstress herself, Khailrah has a number of Arachne working under her to create these garments tailored to her clients specific tastes and needs. Holding a wide array of clothing, accessories and trinkets in vary different styles and fashions from around the sunless realms. However, Khalirahs most valuable commodity is knowledge and intrigue, rumours, secrets and plots that she will share for the right price.

Loud and raucous laugher erupts from the open deck outside the tavern, the waft of cheap alcohol, thick ales and lotus smoke assails the senses. Accompanied by the delicate sound of lyre strings and rattle of bone dice from within, endears itself to local patrons and weary travellers alike.   The tavern owner, a retired mercenary and infamous raider in his youth, is renowned for giving his regular patrons tabs that end up putting putting in debt, luckily for them he has a number of odd jobs and guild requests on a convenient board in his premises, and receives a nominal fee from the requested should the job be taken at his establishment.

Bumping shoulder to shoulder through the ceaseless hustle of the Bazaar, one will no doubt come across a jaunty, misshapen caravan know far and wide throughout the sunless realms. To those who step foot inside, this musty old caravan is a treasure trove. Filled with countless strange and wondrous objects it’s owner has collected throughout his travels in his youth. Shelves upon shelves of ancient tomes and grimoires, crates of ensorcelled weapons, staves and armour and strange ornaments and jewellery from every corner of Evalaw, and beyond.   It’s owner, a peddler of peculiar oddities and abnormal artefacts, Khor Arubat and his emporium of curiosities. This shrewd, cantankerous old Tiefling can be troublesome to strike a bargain with, unenthusiastic to part with many of his trinkets and baubles, and renowned for striking dubious bargains in exchange for his wares. Those who think they have managed to wrestle a good deal out of the old man, or to have outsmarted him, will not be counting their fortunes for long. Khor Arubat is renowned for his penchant toward cursed and jinxed items, those he has enthusiastic parted with will be undoubtably the bane of those unfortunate to possess them.

A Great Article. I love the layout and Style, The information is good, but best of all is The Artwork, Truly Amazing. A well deserved Like from me.   Aemon

Fantastic article! Reading it, I can imagine the sounds, the crowd, colours and flavours of this cacophonous immense market... It seems a place full of risk and opportunities...