See that? That there pin on the horizon? Yeah that's the Tower-no it doesn't have a better name, its just the Tower- People say it will heal you, just being near it. They say it's been blessed by the deities.
— an exasperated guide

The Tower has stood for as long as people can remember, being the one thing that remained, glittering on the burning horizon. It has stood proudly, defying the stone-melting heat, the violent winds and sandstorms, and even the unrelenting tests of time. Before long word of its survival spread through the Fire Planes and surrounding areas, some calling it a miracle, others claiming it a divine blessing of some kind. Either way, people began to flock to the area, bringing their fears, their prayers, their ailments and ills, hoping against all hope that the rumors of its powers are true. Hoping that whatever blessing lingered keeping the tower in perfect health would rub off on them.   Yet for all those who come seeking health, more find disaster and pain in its shadow. Still more come, led by false promises and unfailing hope.

It stands tall enough that the top fades away in the haze no matter how far away you stand. One can never actually be sure they had seen the top, just where the heat ceases to let them look past. No one has attempted and succeeded at discovering its true height yet. The base appears to be made of a very pale brick stained red with dust held together by a thick layer of gold in the place of mortar. But they are not bricks. They do not break like bricks, they do not crumble like bricks, and they do not fail like bricks. Its base is wide, yet not wide enough to survive the constant onslaught of the desert winds and yet it does. The farther up you look, the darker the brick appears, being far more pigmented.

With all this traffic one might think that the tower base is an ideal place to set a city: Tourism and a divine blessing of health, what could be better? Yet many have tried, many have failed. This should have been the peoples first warning that perhaps the tower does not bring health and fortune to those around it.

One of the oldest cities to place itself at the Towers base, settling right up against its pale bricks. At first, all was well, the people flourished in the Tower's shadow, sheltered from the overbearing heat and many of the brutal winds. The sands were safe for their children and the buildings lasted, protected. But after a year not all was well. Fyre Bushes burned closer, wilder, forcing them to remain indoors. The winds shifted, carrying with it the sands they managed to hide from. What once was a shield became a blockage, piling the sands on top of their pristine houses, burying them alive within days. The people were trapped by the flames, not one survived.

Years later, another group found the Tower, deeming it a suitable place to stay in contrast to the harsh reality of the desert. They managed to build a few small buildings before disaster struck not 3 months into their stay. Sphinxi were blamed for the carnage in what remained of this place, long before they were deeming nothing more than a myth, and even longer before the public realized they truly did exist. Any who did see the remains first hand who saw the scorched stone and bloodied corpses might have protested against the story if not for the gold coins pressed into their palms and the promise of retaliation if the truth got out.

Another group came slowly, gradually growing over time. At first, it was just one family bent on bringing life to those who had little hope of one. They called themselves doctors, they called themselves magicians, they called themselves miracle workers. Everyone else called them charlatans. Yet there, In the shadow of the tower, they thrived.   others came soon, flocking to the shade and protection only to be crushed down by some tragedy. From Sand Worms to uncontrollable Firestorms, each new building was destroyed, leaving only the hastily built 'hospital' untouched by natures apparent wrath.

Soon after the Tower and its surrounding area were declared holy ground, unfit for public living. Several Veknguwo and Vekngug got to work cleansing the area, setting up places of prayer and blessing, as well as sections for healing near the center. When, after a year's time, these places still remained, the Priests were solidified in their assessment of holy ground and officially declared it as such. Now the only problem was to determine which deity it belonged to.

Most believed it was only natural that the credit be given to Vekeko since she is not only the Leader of the deities but also the patron of motherhood and flames. A large aspect of motherhood is caring for those around you, including the sick. In addition to that, many of the tragedies in the area were closely related to flames, further proving their point.

Others more used to eastern ways of thinking naturally associated fighting with healing since they are both very physical attributes, Thus giving the credit to Boe. This believe is more commonly found near the Obœ Delta or by those who migrated from the east. Her response so far has been indifferent but some persist despite it.

Since creation and creativity often includes scientific and medical breakthroughs, leading many to believe it Tobs domain. Their silence on the subject is no deterrence since they rarely give any insight. Many automatically give the praise to them for the medical equipment and medicines anyway, so it is not a stretch to praise him for the places' believed inherent power. 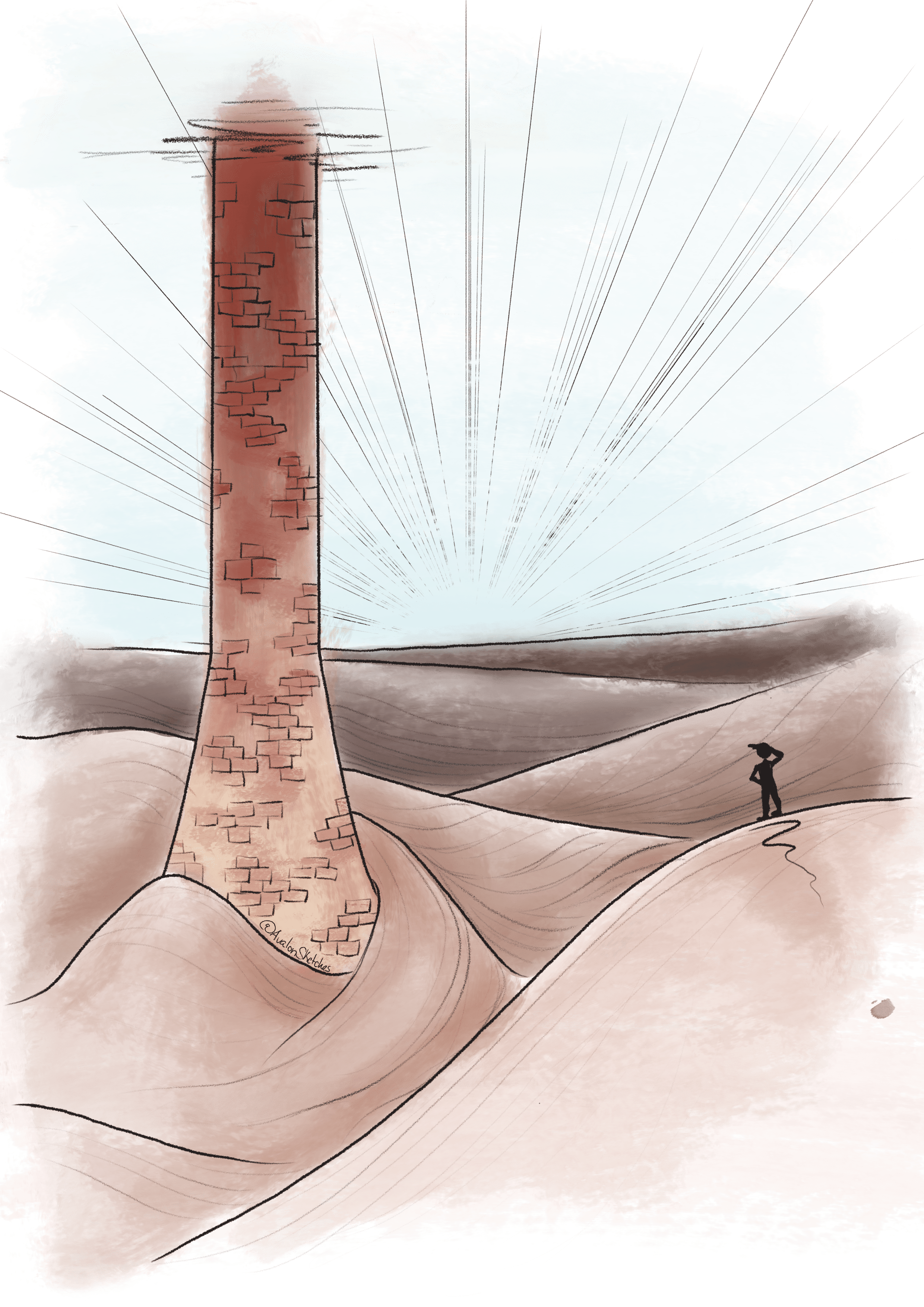 Very few believe this place not blessed by the deities but cursed by something far older to be a prison of some sort, housing a powerful being of fire. While there is little evidence to support this, there was a young prophet back in the first years out of The Great Forgetting that claimed to have a dream involving the tower and the long lost elementals, specifically Flame. Unfortunately, this information has been long lost to the public who have almost completely forgotten about the elementals in favor of the deities.

There is very little known about it in general, only a few scrolls mentioning their departure and some crumbling correspondence between them and their family members till, suddenly, the letters stopped. A month later a scout was sent to check on them only to discover the entire settlement completely destroyed. The houses ripped apart, bodies impaled on stakes, limbs missing only to be found laid out in horrifying shapes all over. The true cause of this carnage remains unknown. in the end, its easier to blame it on the Sphinxi.

the whole reason there is a religious discourse over the land is simply because no members of the Flawkaw Pantheon have natural domain over Healing or Medicine, leaving it up to grabs for who could claim it in the moment. Often times, during other disputes, a Conduit would be brought in to speak for the deities themselves, however no Conduit stepped forward with an answer, leaving the community in the dark.

Answering: "a building associated with healing the sick"
Visit AvalonArcana's Competition Page Check all other answers to this prompt Competition Homepage

I love the slightly sinister tone here. The destruction of the settlements is genuinely horrifying. Those poor people. I wonder what the actual origin of the Tower is. I love the art too, by the way. :)

Why, thank you! I think I’m starting to love subtly creepy things, as for the origin of the Tower, we’ll find out….eventually :)

I love how much mystery is surrounding this tower