The 5 Shudake       Second Shudake    2R: Flora and Fauna    2R: Fauna    2R: Mammal      Sphinx
At first, the Sphinx existed only in western folklore, written as creatures built of sand, resting in the vast deserts alone. It was generally understood that they guarded great treasures hidden by the Forgotten Ones. There were stories of those that stumbled upon them, answering their riddles with extreme cunning and wit with a sword in hand, just in case. The treasure they held more dazzling than a thousand suns, worth more than anything the Dwarves could mine.

But these were only stories, told to their children to inspire both wonder and fear of the open desert. People joked, and imitated the riddles at parties, made games of it, safe in the knowledge it was all a figment of the imagination.

The first person to come back screaming from the desert was written off. Crazy, deranged, sun-touched. After the hundredth person, Krekkonians were forced to comes to terms with the fact their bedtime story was real.

There are many conflicting reports on what a Sphinx looks like, some claiming they have 4 legs, others say 6 or more. Some claim there are 9 cat tails that writhe when an answer spoken is wrong, but others will laugh and say that's ridiculous, that the Sphinx only has one tail and it rarely move before starting a bar fight that will last till everyone involved is a bloodied mess.

There are some facts that most everyone agrees on. First off, they are incredibly large, towering over the average person, including Orcs, easily able to swallow them in one bite. Secondly, they seem vaguely cat like, with pointed ears and powerful haunches made of shifting, living sands. Lastly, their teeth are the only part of them that gleam in the sunlight, more solid than the rest of the body and hauntingly sharp.

Sphinxi do, in fact, live near treasure cashes. Not to protect them, however, like most believe, but to aid in their cubs growth. Most Sphinxi live in relative proximity to each other, creating burrows not unlike fox holes in the sand. In the bottom of these holes is usually their stash of jewels and gold, gathered over the carrying months. 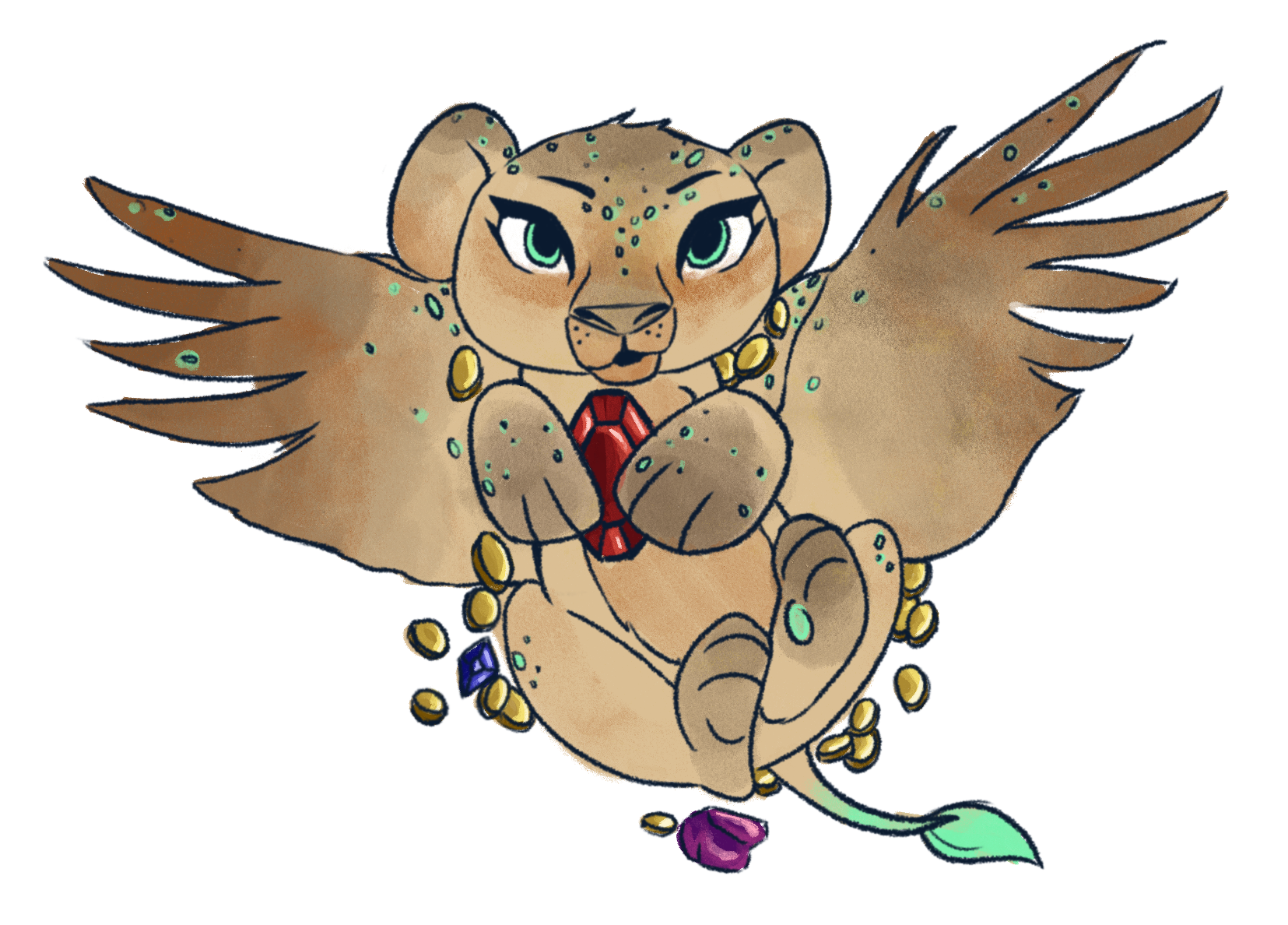 by Avalonsketches
Young Sphinxi feed on gold and jewels, the more they eat, the more intelligent they end up. Because of this, young Sphinxi teeth are incredibly hard and durable, making many people believe they are lucky and bring strength to any who poses one.
An adult sphinxi does not eat nearly as much as a young Sphinx, only crunching on obsidian once or twice a year. During this time, it is not uncommon to see black sand mixed in among the normal pale sands for about a month after eating.

They do not eat living creatures, but that doesn't mean they don't kill them.

It is said that the Sphinx can tell when someone is lying, almost as if they can hear the words shift back to truth before they finish speaking. No matter if it is true or not, it is known that they hate liars.

What no one knows is that they can morph themselves into other things, most commonly a pale yellow cat native to the desert outskirts. These cats watch over the cities from the outside, positively fascinated by civilized culture, though not enough to insert themselves past a moment or two.
Lifespan
60 years
Average Height
60 ft
Average Weight
700kg
Geographic Distribution
Much of what is known about Sphinxi comes from the ancient stories and reports and as such it is horribly blown out of proportion. Unfortunately, most people don't realize this, taking everything they have ever heard as fact. This has led to unbelievable problems with people who either are incredibly afraid of them, or go out in search of their treasure, placing them in mortal danger.

Many people believe they are bound by the old rules of riddles, where a sphinx can only harm you if you fail to guess the answer and a sphinx must engage in a riddle game when one is proposed. This is not true, and it has caused countless people to venture off to their deaths.

Don't go off to find a Sphinx hole, all it does is endanger you and endanger their cubs.

I absolutely love this unique take on sphinxi. I really like the image of their cubs gnawing on treasure. <3 I also really like the idea that no one truly knows what they look like because people's tales vary so wildly.

Thanks! I got the idea from someone talking about dragons, if you can believe it. With a little altering, it fit right in. And yeah, the image of them them gnawing on treasure is adorable. <3

This was such a neat read! Loved the illustration of the young sphinxi near the bottom, would love to see an image of an adult somewhere. But it's still great, even without that.

The drawing of an adult is going to take a bit more time since i'm a bit swamped at the moment but it is on the list to work on, but i'm glad you liked it!