Sure, I thought about removing the other horn... but one-horn sounds better than no-horn now does it?
— Dagmar

Dagmar Blair is a well-acclaimed Aurochian from the small coastal village of Berufell, a mere slave turned protector. After an attack of a Draugr the size which was never seen before, she earned her freedom and place in the settlement ever since.

As an Aurochian, Dagmar is a large and sturdy woman. Distinct by her one horn, she towers over people around her. Dressed in Nõrdman attire, many describe her as "imposing, but friendly".

Dagmar knows how to handle many types of weapons, from bows to spears. Typically she prefers to fight using her double-ended spear, keeping a short blade for close encounters.

Dagmar remembers not that much of her past, only that she was born in a small coastal area in Roselia. Growing up as a child of a fisherman, her early life mostly consisted of cleaning fish and selling the catches of her father.

That was, at the age of 13, a Nõrdman fleet approached her town, raiding and burning it down to the ground. She and a few others survived the attack, being taken in as slaves.

They used to treat me like cattle. Tugged me at the horns, eyeing me over, putting me in the fanciest clothes they could afford. All to be sold like some trophy to some rando to satisfy his twisted fantasies.
— Dagmar talking about her slave years

During her first years as slave, she got sold between many slave traders. The next few years had her move across Nõrdlann's frozen lands, switching hands every so often. Everything from concubine to heavy labour was her selling point. Any chance to flee ended up failure.

Eventually, she arrived at the small town of Berufell, where she was sold as a house servant to one of the families. As she matured, they realised her size and strength did not suit indoors help. So instead, she began helping with heavy labour outside.

Although her escape attempts still consisted, her treatment became more humane. Not only was she treated as part of the family, they also taught her how to hunt and fight on her own. She even had the chance to participate in a Forlog Veida for her 15th birthday.

Around her 19th birthday, Dagmar witnessed something unlike anything seen before. From the depths of a sea, a Draugr arose, the size of which was unlike any seen before. The Undead made a straight line towards the village, causing alarms to be rang.

The bloated corpse cause a rampage unlike any seen before, quenching its bloodlust on the villagers. Dagmar tried to bring as many as possible to safety. However, she got caught by the Draugr, grabbed by the horn and tossed aside, breaking it off.

Either due to the sudden blood loss or the kick of adrenaline to her system, Dagmar's thoughts cleared up. Even though she had a chance to run, she instead grabbed the attention of the Draugr.

With the Undead focused on her, the went in an one-on-one battle with it. As people evacuated villagers away, she tackled and sliced into the living corpse, getting tossed around in the progress. But even as Dagmar got bruised and scarred, she kept fighting with all she had got.

In the final few blows, she broke its left calf, making it fall to the ground. And with a support beam of a broken house, crushed the skull of the Draugr, rendering it dead. Only moments later did she cave in, collapsing from her own wounds.

Days later, she woke up to the sight of her wounds bandaged and villagers thanking her for saving them. As an offer, she was given her freedom, alongside any reward she desired. Not knowing where to go, she decided to stay, as long as the Aurochian had her freedom and her own home.

As such, restorations to Berufell came along, with Dagmar getting a home of her own while she recovered. As a memorial, her broken horn got converted into a drinking horn. Nowadays, she became a respected inhabitant of the village, helping with the hunting of large prey.

While not filthy rich, Dagmar lives quite comfortable in Berufell. Not only does she have her own house, she has accumulated a small hoard of treasures from her hunts. From mounted heads of things she hunted to even some treasures she found during travels outside the village. 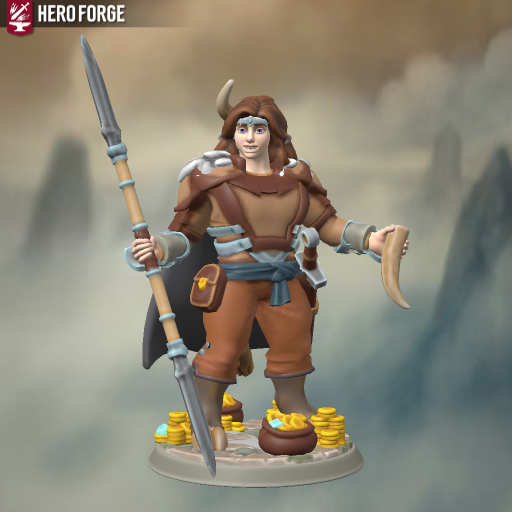 Tweet
Join Tales of Fabulae: Retold Discord!
This setting uses trademarks and/or copyrights owned by Paizo Inc., which are used under Paizo's Community Use Policy. We are expressly prohibited from charging you to use or access this content. This setting is not published, endorsed, or specifically approved by Paizo Inc. For more information about Paizo's Community Use Policy, please visit paizo.com/communityuse. For more information about Paizo Inc. and Paizo products, please visit paizo.com.
Additional artwork is owned by their respective owners.
Cover image: GoldGreen Set - Character Cover by Vertixico
Character Portrait image: Dagmar Blair by Endrise

This article was made for the Hero's Journey Challenge.

The horn as Memorial rather than memory. Nice little profile for a potentially interesting encounter.

Aw, I like her story. It sucks she had to deal with slavery though, but I'm glad she was in an much better space by the end. I like that her horn was turned into a drinking horn.