Tales from Nigita is a shared universe, cooperative play campaign using the Fantasy Flight Games version of the Star Wars RPG (Edge of the Empire, Age of Rebellion, & Force and Destiny). The campaign begins in 35 ABY, shortly after the events depicted in Star Wars Episode IX: Rise of Skywalker.

Your characters are a group of mercenaries, scholars, entrepreneurs, prophets, or adventurers who have arrived at the central city known as The Hub on the planet Nigita. The Hub is a fully built city abandoned by the Final Order before they moved to Exogal. The fall of the Empire/First Order/Final Order has seen the BoSS (Bureau of Ships and Systems) restriction on the planet lifted and many citizens throughout the galaxy have arrived in order to seek their fortune among what Palpatine’s followers left behind on the mysterious planet.

When coming up with a concept for your character, your guiding principle should be: If you cannot see them having a recurring role as a protagonist in The Mandalorian, it might not be a good choice for this campaign. Characters should be heroic in nature.

First and foremost, we expect our players and GMs to have a copy of the Fantasy Flight Star Wars RPG Core Books, of which the Force & Destiny book is the most up-to-date. We also expect you to own the sourcebooks you use for your character. Although we have quick reference guides available to help with most-often-used rules, supporting the authors & publishers is essential to the game's continuation.

Players should steer away from concepts that are likely to cause inter-party conflict (dark side characters, First Order/Imperial Remnant characters, silly/non-thematic concepts, etc.)

Session rewards consist of credits (900-1100Cr usually 10XP per session (to a maximum of 50XP/month and Duty towards a selected faction. Contacts, equipment and other rewards are also sometimes given out, but any salvage/gathered gear/vehicles from defeated enemies are expected to be delivered to the mission’s originator unless the GM specifies otherwise.

We have created a number of essential resources for playing and running in the campaign, copies of which can all be found in our Star Wars Tales from Nigita Resources Google Drive folder:

There are four major factions that the PCs will be working for and earning Duty ranks from:

Each time you reach 100 Duty with a faction, you may be rewarded depending on the faction involved and the GM’s review of your request. See the Duty Guide for more information.

We use the following house rules in the game (and reserve the right to add others if they become relevant):

Note: These numbers do not reflect the 50xp bonus gained from not having a lightsaber.

Characters are created with 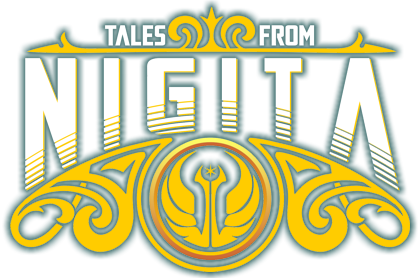 Tweet
All content ©2020 VSpace, LLC. All rights reserved. The VSPACE Hexagram Logo ™2020 VSpace, LLC. Individual campaign articles are copyright by their authors, used here with permission. Additional images used via Creative Commons licenses as attributed in image descriptions. VSpace, LLC is not partnered with, affiliated with, or endorsed by | Fantasy Flight Games | Asmodee North America | Edge Studios | Star Wars | Lucasfilm LTD | Paizo, Inc. | or The Walt Disney Company | and does not necessarily reflect the views or opinions of any copyright holders or their affiliates or any of their affiliates, and no warranty expressed or implied is made regarding the accuracy, adequacy, completeness, legality, reliability or usefulness of any information. Views or opinions expressed by players, GMs, or in-character fiction do not necessarily reflect the position of VSpace or its members.