A World Seperated by Gods and Storms


A planet crafted on top of a fountain of unlimited energy, yet haunted by the scars of past. The world of Tikor.

The most defining feature of the world of Tikor is its landmass. The enormous mass of land is almost broken into two halves, a Northern and Southern halves of Tikor. These two massive halves is where life flourishes on the planet. While there is much life to be seen in its vast oceans, most of the action happens on land. It’s on land that the majority of the creation myths take place. While many cultures exist on Tikor, each with their own deities and customs, most of them acknowledge a single creation god. The great Divine Entity, Ishvana. She crafted the planet Tikor on a stream of intangible energy called Ether. It’s through this flow of energy that makes life on Tikor so vast and diverse.

The great goddess Ishvana is as ageless as time itself, with powers that the world of man will never understand. However, even she had a limitation to her abilities Life is not so easily created, even amongst the greatest of deities. So Ishvana crafted the world of Tikor on the spot where she could create. To build a world full of life and wonder, she placed it directly in the path of the cosmic energy, Ether. It was the combination of Ishvana’s unknown powers and the stream of Ether, called Etherforce, that allowed for such a marvel to be crafted. This allowed for not just the creation of a planet, but also for life within it. The course of Ether flowing through the planet could empower generations to come. They also would be able to tap into the energy that had become a crucial element to the planet. Ishvana had intended to craft more than just Tikor, but a rival deity interrupted her plan. Xavian the Withering King.


Humans will never know what it feels like to be in Utopia. To be in a state of perfection. And then to watch a monster show up day and rip it all away. The planet may be here, but make no mistake mortal. It's different from the world I was born into.
— Divinity Cadmus
On Xavian's Influence on Tikor

Not all Divine Entities are like Ishvana, with the intention to craft and create. There exist divine entities that truly enjoy corrupting and devouring things that others have crafted with love. Xavian is that sort of being, ever hungry to take from others. Roaming through the known, corrupting as he saw fit, the prosperity of Tikor caught his attention. He saw what Ishvana was creating and saw a playground of infinite potential. He wanted to destroy what she had created, but not before corrupting it, bit by bit. The Withering King enjoys the slow act of destruction just as much as the savor of despair when he's done.

Xavian attacked from the edges of the cosmos, eating away at the fabric of it, tasting his work as he consumed. Ishvana saw the incoming decay and worked to protect her creation from the malicious force. Legends say though that she had never faced a force as dark and twisted as Xavian's, she was ever willing to fight for Tikor. She was just as determined to save her world as Xavian was to destroy it. However, despite her best efforts at repelling his essence, he was able to break through her barrier around the galaxy and launch toward the budding world.

Once Xavian was able to cross her barrier, he immediately began his work at corrupting the world. Ishvana fought back at every avenue, using her warmth to burn away his dark corruption. Despite her impressive defensives, The Withering King was able to kidnap a handful of the elementals Tikor had born. He encased them within a second sun he created. Winged horrors exploded from the sun, the corrupted elementals having been transformed into world-shattering Dragons. The horrific beasts sat upon Tikor, turning the tide toward the dark god's favor. With the possible destruction of her new world at stake, The Gentle Creator made the ultimate sacrifice.

Ishvana gave up her body from this plane to become one with the very stream of Etherforce coursing through Tikor. With the power of eternity itself, she repelled all of Xavian's negative corrupting energy out of Tikor and the plane of existence it lived on. The corruption and Xavian himself here pushed into a pseudo prison, Beneath It All. The dragons, The Wretched Ones, were prisoned underneath Tikor after one of there own betrayed them to join Ishvana's side. With the plane and the world itself safe from harm, the loving deity let her hand off the world and rejoined the Etherforce.

A large planet with the right conditions for life, the two large land masses have wildly different climates that very rarely fluctuate. The northern hemisphere of Tikor is mostly temperate weather with warm to cool temperatures and heavy precipitation. This has lead to an extremely heavy forestation across the lands of Garuda and Grimnest.   The southern hemisphere, on the other hand, is mostly desert weather with spots of desert plains and oasis. This is the area of Tikor hit the hardest by the second dwarf sun that hands in the distance. Certain areas of Vinyata experience extreme heat, as well as strange weather patterns near the Ebon Cascade.

Perhaps it's due to to the strong flow of Etherforce flowing through Tikor. Perhaps it's because of the multitude of Divine Entities that have come to this corner of the cosmos and created life. Regardless of how it came to be, Tikor is full of divine beings. With very few exceptions, divine life is on every land, in every country. This has become a normal part of life on Tikor. While many of its inhabitants have excellent and friendly relationships with deities, not all humans are happy with their interference.

From Tikor, it seems as the world is circled by two suns. The larger sun that the planet revolves around, and a second dwarf sun that seems to, however, direction over the southern hemisphere. In reality, this is not actually a sun, but a black hole sun. A quirk fate of reality, or a stroke of luck in the case of Tikor. For you see the black hole is the result of the cracking of the second sun that birthed The Wretched Ones. When the winged horrors sprang from it to assault Tikor, the mass of the sun fell in upon itself. Created the horror of the galaxy, a Black Hole. However, in what turns out to be the lucky part, the black hole absorbed the formal solar energy and the light around it. Reflecting it back out in a similar fashion as to a sun. Albeit much less powerful, which once again works out for the planet. As for why the sun seems to stay in a fixed orbit to southern Tikor is a separate mystery. 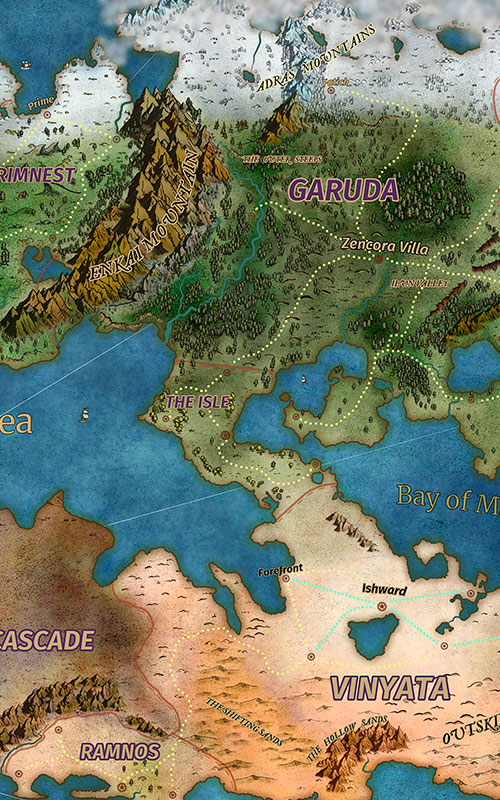 The Divine Entities and their children vie for control of Tikor amongst personal wars and Xavian's corruption.

The era of history where Gods were time immortal

The Current Era, the world has found out that deities are not immortal and can cactually be killed.

Thanks! I hope you continue to enjoy it!

Wow. You've peaked my interest, I'll have read up on your other articles later!

I hope you enjoyed the other articles you read!

Really good start, although I'd love to see some more details provided under geography - Even if it's just summaries of the landmasses and more important regions. The idea that the deities exist but aren't fully all-powerful is neat, too.

I really liked the theme of the battle between Ishvana and xavian, basically creation and destruction. The two suns were also a nice touch and added a different feel to the world. One question I had though was how big were the wretched ones? They seem to have been really big given that they are world shattering entities. I also loved the fact that you gave limitations on both the divine entities so that’s a nice touch as well. I’m looking forward to reading it more