The tallest herbivore in Garuda is also the most gentle


A legendary sized type of giraffid that grazes the quiet and remote parts of Northern Garuda.

Large grazing animals are commonplace to the denizens of Garuda. The wide, ample grasslands and vast valleys make ready homes for thousands of species. However, in the remote foothills of Northern Garuda, there lives an exceptionally large herbivore, even by Tikor standards, the Shivasteed. Standing at over 3m, it's curved horns can often be seen poking above the forest canopy. Their size eclipses all of their giraffid cousins, making them the obvious king of the four-legged grazing animals.

Despite its size, the Shivasteed has the reputation for being an extremely amicable creature. It rarely holds fights over breeding grounds or territory. There are only one or two verified accounts of humans being attacked by Shivasteed, and all cases the human was the aggressor. This is not to say that one of these giant giraffids is not capable of defending themselves. The burgeoning weight of their skull and horns causes them to develop extremely powerful neck muscles. This allows them to either swing their heavy head sideways like a 1,000 kg hammer or forwards like a battering ram.

The animal's size and gentle reputation have often caused humans to go looking for the giant herbivores, eager to see them with their own eyes. Unfortunately, Shivasteeds are extremely shy toward humans and often dash at the first sign of the two-legged observer. With legs at over 1m long, once the animal starts to run, there's almost no catching it. This has made the study of the animal rather difficult, as it can be extremely difficult to stay near one of the long-legged creatures for long. Upon hearing or seeing a human, they will flee at top speed.

There is a famous tale of one entity that was able to charm the skittish creature, even turning the tree grazing animal into a mount. The See'er tell a story of a lost culture in the foothills of the Adras Mountains that worshipped a set of unnamed gods. All are still unnamed but one. A god only known as Shiva is said to have sung to the tall mammal until it bent it's head in reverence, allowing the god to ride the huge creature. Thus earning it the name Shivasteed or Shiva's Steed.

In many ways, the Shivasteed resembles other Girrafids such as the Okapi. The large creature comes in at 2.5m just from hoof to shoulder, including the next puts an average Shivasteed at over 3m. Their legs are fairly thin, with the majority of their muscle coming from their thick thighs and compact midsection.   Their shoulders are extremely well developed, due to holding up its large skull and heavy antlers. Like most Giraffid's, the Shivasteed has two sets of curved horns, on it is head and the set behind the eyes.

These gigantic ungulates tend toward keeping to the enormous trees that cover the foot of the Adras Mountains and generally range across the Northern region of Garuda . While they don't migrate, they will often move to other parts of the region to escape predators or negative weather conditions.   Their height gives them a monopoly when it comes to food, allowing them to essentially live anywhere with tall vegetation.

Shivasteeds are herbivores, picking off the fruit and vegetation at the top of the forest canopy. Their strong jaws and flat teeth allow them to break through even the toughest fruit or vegetable casing. 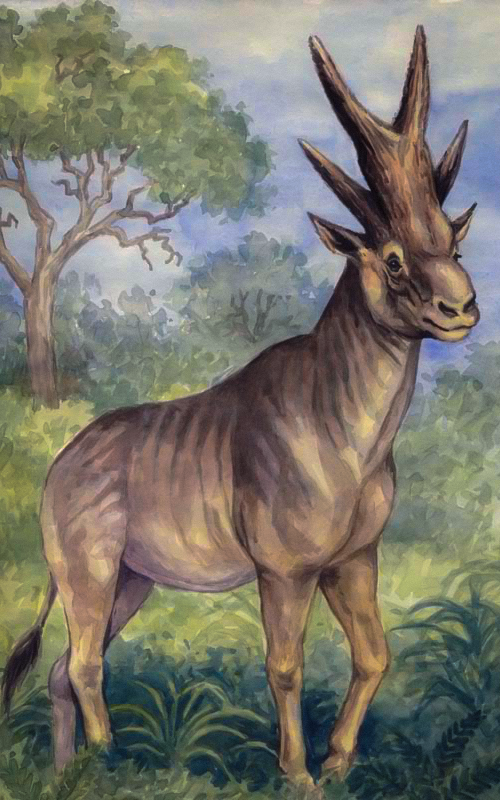 Genetic Ancestor(s)
Origin/Ancestry
Northern Garuda
Lifespan
50 Years
Conservation Status
Like most animals in Garuda, the Shivasteed is protected against hunting for any reason. This doubly goes for the gentle giant, they say severe and mystical misfortune befalls any who harm them. The tall creatures are protected by nature itself, a testament to it's sweet and gentle nature.
Average Height
3 meters
Average Weight
1200 kg
Average Length
2.5 meters
Average Physique
Like most animals in the Giraffid family, it has long thin legs, wide body, and long neck. The Shivasteed, however, has an exceptionally muscular neck due to its heavy head.
Body Tint, Colouring and Marking
Short dark yellow fur with various markings. Some in the form of spots, some in the form of lines.

Nice idea! I found a couple of places were the language is a bit of: Under "King of the Giraffid" --> there lies an exceptionally large herbivore (maybe write "lives" or "there can be found" instead of "there lies" Under "Anatomy and Morphology" --> Girrafid's (it should just be Giraffids, I think)   I really like the idea and the mythology behind the name is great! I really loved reading the article and your formatting made the experience even better :D Great job!

Fixed, and thanks for the kind words!

What a charming creature! The story of its naming is my favorite part of this, and I feel like a story quote right beneath that quad of textblocks about someone retelling the story would be a great addition.   Do they ever find and study dead Shivasteed? If not, that may be a mystery unto itself...   Also, excuse me for ignorance, but are okapi a part of the setting as well? I know your world derives itself from African lore but given this creature article and stuff I've seen in your other articles I didn't know other IRL creatures such as Okapi made it into the setting as well. I even hopped over to the Geruda overview to see if I could spot mention of them there first!   Typo: In your excerpt it's should be its

I was thinking about doing a quote for the story but was ready to move on. I plan to go back and expand on this one a bit.   Most of the research on sacred animals do come from corpses. You'll hear more about that field in the future.   Yes, I am adding in real life creatures as well! The Okapi are just so iconic it would be crazy not to. You can't see those horns and not think Africa. I typically try to do extinct African animals first, (shivasteed is based on a real extinct animal), then I'll add in the known ones that are key to the setting.   Building my Species has kinda been on the bottom of my list, so I'm just now starting to add more.

Such a nice critter. Well written and well formatted as always from swordsfall <3   Are there any outlaws in this region that hunt animals and the shivasteed, despite the risks? There must be a lot of meat on them, and desperate times leads to desperate measures..   It could be cool to see how they fit into the cultures around them; are they commonly featured in stories or theater plays or as statues? Are the horns of a dead shivasteed considered cursed or desirable? What other animals, if any, hunts a Shivasteed? Are those animals also the target of nature's curse? Are they considered extra bad animals by people because they hunt Shivasteed?   Awesome work as always <3