With words they protect the people


The voice of the people. Armed with the Power of Word, they keep the stories that are never told. Bringing light to things that would never have seen the light of day.

Unlike most professions, Jalens don't have a single profound origin. Much debate still rages over where the first Jalen came from and who they were. All anyone seems to know for sure is that the profession came to rise out of necessity. Out of a need for the average person to have power and station over their life. Much like Griot are the voices of history, Jalens are the voices of the people. Where there are people, especially those in need, the Power of Word seems to come to life in someone. While it's possible to train and become a Jalen, most of them, especially the most powerful, seem to just be born for it.

The core of the power that spawns the Power of Word is rebellion. Not always in a way that leads to marches, though it does happen, its about questioning the status quo. Jalen's use there ether infused words to bring to life stories. Not just any stories but the stories of people who may not be heard. Be it because of poverty, sickness or simple neglect. The need to express something that may not have been said is the fuel that powers the Power of Word. And something that not only defines the profession but fuels its powers. They say at the heart of every Jalen is a rebel, and it's something they're proud of.


I feel for Jalens, ya know? Everyone has something to say about them when it's not their struggle. Until they have a problem and need a voice, then they suddenly love Jalens. More power to them, but I couldn't do it.
— -Passerby
Interviews from the Wordsmith Magazine

Jalens mainly sprang up in Garuda during the early years of the Divine Age. Surfacing from several cultures in the area at around the same time. Karu Jalens say they were some of the first with early ones bringing to light the issues that came with being on the outskirts of the nation. The Dracon, however, argue that they have the first Jalen's. All born from the brewing discrimination the felt at the hands of Karu and Garuda. Given the history each culture has, neither one is willing to concede. But both admit that the Power of Word spread across the world with Jalens of every type speaking truth to power. Each one different though. Their style of word taken from their core culture with issues that spoke to the people around them.

Around the middle of the Divine Age, 500 D.A or so, Jalen's were not just around the world, but they had risen to roles of prominence. While Griots, with their ability to speak history, are always seen at a ruler's side, Jalens were now close by. Or more often, at the side of their upstart rival. The power they had to unite and rally people had become a fearsome weapon in the political sphere. When people were ready to act, Jalens were often the igniting spark. Nations were beginning to realize that it was now a Profession. Maybe not of the same social rank of Griots, but closing that gap with each day. Jalens ahead of them with that realization. And so sixteen of the most prominent Jalens met to discuss a future.

Reggie Savage was one of The Sixteen before retiring.

The Isle hadn't been properly formed at this point, but it was a strip of land with a growing populace and beautiful vistas. It made a suitable backdrop for what would be a legendary meeting at a place that would be central to Jalen culture. The list of some of The Sixteen is now considered legendary. They included members like Reggie Savage, Flayshe, Laidee Storm, and Herc were founding members. The sixteen Jalens had a roundtable that lasted an entire week. Discussing the ordeals they had all seen and how each of them saw themselves putting in work for change. In the end, they decided that the way wasn't to control Jalen's movements but encourage each of them. And perhaps arm them with better tools to fight the good fight with.

As The Sixteen became established, various community-focused ideas came up. One of the first and still most popular of these is The Summit of Kings. The yearly battle for the Wordsmith, the unofficial best Jalen on Tikor. The tournament served as a way for Jalen's around the world to meet and test their abilities in friendly combat. And for the average person? Well, it became a show like none other. Up until the first Summit of Kings was held the average person hadn't seen a Jalen's power in full display. Inside the specially built ring, the Jalens could battle with verbal power without harming each other. Letting the real strength of the Power of Word shine for everyone to see.


For me it was really more like a calling. I was always the kid who wouldn't let someone be picked on or bullied without saying something. I think sometimes you just have to decide if you really stand for what you say. Inspiring people and punching bullies. My calling.
— Ella King
Interview with Wordsmith Magazine

The Summit of Kings over the years has become so popular that a city actually sprung up around the yearly tournament. The South Onyx is that place and its hustle and bustle match the Jalens that appear once a year. It started off as fans who decided not to go home after the first Summit of Kings. Instead, they stayed on the Isle and built up their up small village by the time the second came around. With the second tournament, even more, people stayed. And over the course of hundreds of years, South Onyx has become a key part of the Jalen way of life. It's a place to make connections even before the Summit, with a noticeable portion of Jalen's living properly in South Onyx.

However, even with The Sixteen and things such as The Summit of Kings, each Jalen is very much their own independent worker. Not a single Jalen is required to listen to anything the Sixteen say, and there are several that do just that. And while the average person will say The Summit of Kings has all the best Jalens, there are plenty who have interest in the tournament either. A Jalen at their core is about the message of the people and words that express life. Many would rather do that solo and in the way they choose. This too is the Jalen spirit. That independent fire that drives them to share a story through words.

Power of the Spoken Word

The power that Jalens wield over the spoken word. When they apply ether to words and emotions, something special comes out. Poetry of magic and magic in poetry. Power of the Spoken Word shows the power in that.

One of the most basic abilities of the Power of the Spoken Word is that Jalens can understand all languages and dialects. A Jalen hears more than just words, they feel the intention of every word and the choice that went into it. With as little as a few sentences a Jalen can learn any spoken language they come across. This has also made them secret codebreakers as well.

The Power of the Spoken Word isn't just something you listen to with your ears. The things they say, the lyrics they layout, seep into the brain. And that's where a Jalen can make those words appear like images in your head. When they tell a story you don't just hear, you see it in your mind like memory or daydream. This goes hand in hand with them being universally fluent as well. The combination allows them to tell just about any story to anyone.

Heart of the Group

Words can soothe and they can also incite and Jalen's know this. Through the Power of the Spoken Word, they can find that message, the phrase or the word to get a crowd going. Whether it be to inspire and uplift or to incite some civil disobedience, a Jalen can whip a crowd into an emotional state. It's an ability that has made Jalen's famous, loved and also feared by nations. Once a Jalen starts to work a crowd up, they quickly become the one in control of it as the affected look to the Jalen for direction.

One of the most famous powers of Jalens are their Disses. No one likes being insulted but Jalens take it another level. While a Griot might just tell the public about someone's misdeeds, a Jalen finds the correct combination of words to make them really FEEL it. A Jalen diss isn't just an insult, it's a carefully crafted lyrical knife to your ego. Once a Jalen has a read on their target they can use their Ether fueled abilities to expose insecurities in the target. Crossing a Jalen doesn't mean violence, it means character assassination. 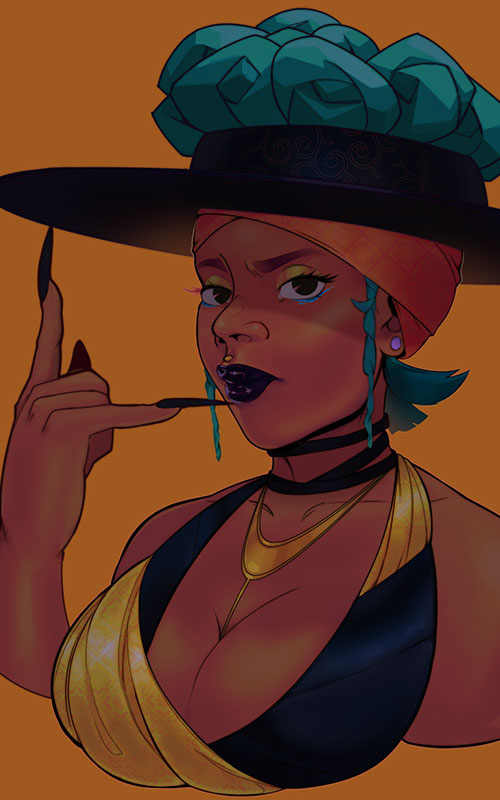 Ella King is one of the best Jalens on Tikor

When it comes to getting people involved and acting out, no one does it better than a Jalen. There's the oft used quip, "At the heart of every riot is a Jalen.". Which while originally meant to mock the Profession has become a bit of a rallying cry for them.

With the ability to memorize everything they see and hear, they are the keepers of history

Physical / Metaphysical Law | Dec 5, 2018
Qualifications:
There are no requirements for being a Jalen other than an unquenchable fire. What qualifies a Jalen all comes from within. There is equipment or schooling required. Of all the professions Jalens have some of the lowest requirements. However, that doesn't mean everyone becomes a Jalen. Stating you're a Jalen, and the people treating you like one are two different things.


Legality :
There are no laws that prohibit anything about Jalens. Not specifically. But more than a few places have adopted restrictions around demonstrating that has specifically come from situations involving a Jalen. If anything it shows how installed Jalens are considering how few restrictions there are around it.


Payment:
Who pays a Jalen for what is something that the Jalen themself always has to handle. When its community work, the pay usually comes from that community as a whole. The rest of the time is up the Jalen and whoever hired them. But one thing is certain, don't play with a Jalen's money. An unpaid Jalen is an enemy no one wants.

This is a neat and powerful idea. I wouldn't want to cross a Jalen either

One, your layouts are always nice to look at. Two, love the description here, the story behind it. This is cool as heck, but it's Swordsfall, so of course, it is. :)