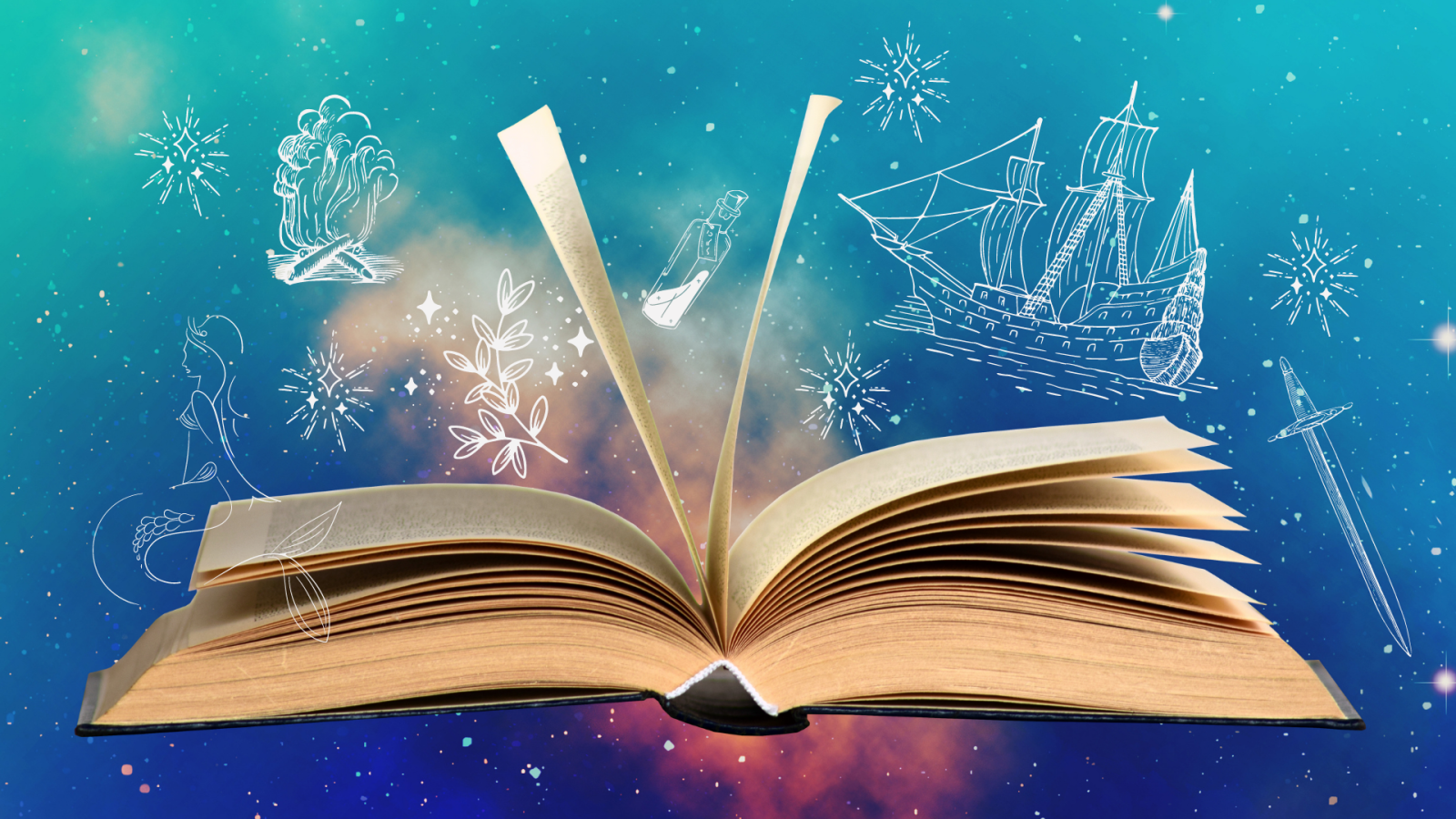 What is a visual novel?

In this article, we will look into the incredible world of visual novels! Find out about what visual novels are, how they vary in format and genre, and how you might begin writing your very own visual novel!   We'll be using screenshots from Sea Hears for this article which will help to avoid any copyright issues, however you may find plenty more examples of other visual novels to examine and research with the recommendations in this article.   Visuals novels are becoming more popular and more accessible to the wider gaming and (reading!) community, with well known franchises such as Endless Space and World of Darkness releasing visual novels to compliment their established lore, and the upcoming Ghostwire releasing a free to play visual novel prologue. Games such as the famous series Ace Attorney and Danganronpa, are more likely to be translated from its original language for a wider audience. Visual novels have never been so varied, so unique and available.

So what exactly is a visual novel?

Strictly speaking, a visual novel is a reading focused game that involves a visual element. Usually, the visual elements include a background and a text box. 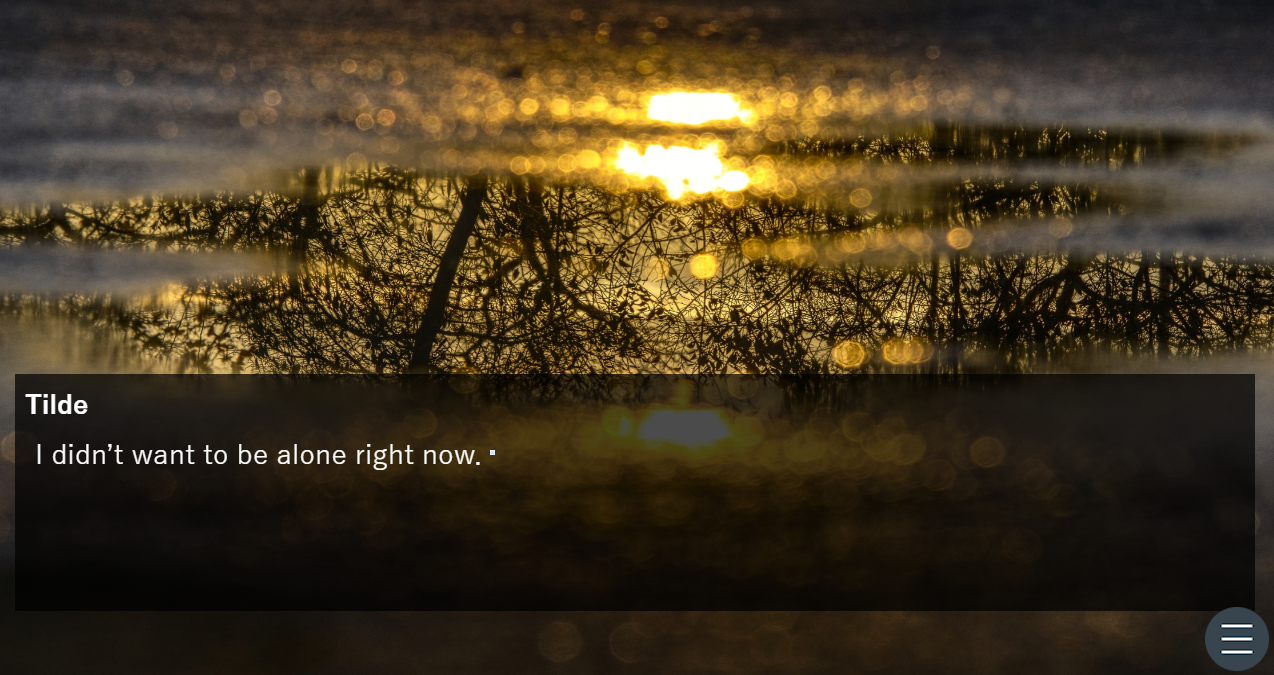 by Sailing Ocelot Studios
If a character is speaking, you may see their name highlighted on the top of a text box. Sometimes visual novels indicate thoughts through italics, brackets or font changes.   While the majority of visual novels may adopt this basic shape, some do not. For example there are visual novels in the shape of a mobile phone such as the World of Darkness Preludes: Vampires and Mages game. You'll read messages from other characters and will send responses based on your choices. If your character ends up dying, a crack appears on the phone.   There are other common visual characteristics. You may see character images on the left, right or centre of the screen to represent the main character's perspective, or a character the main character is interacting with. 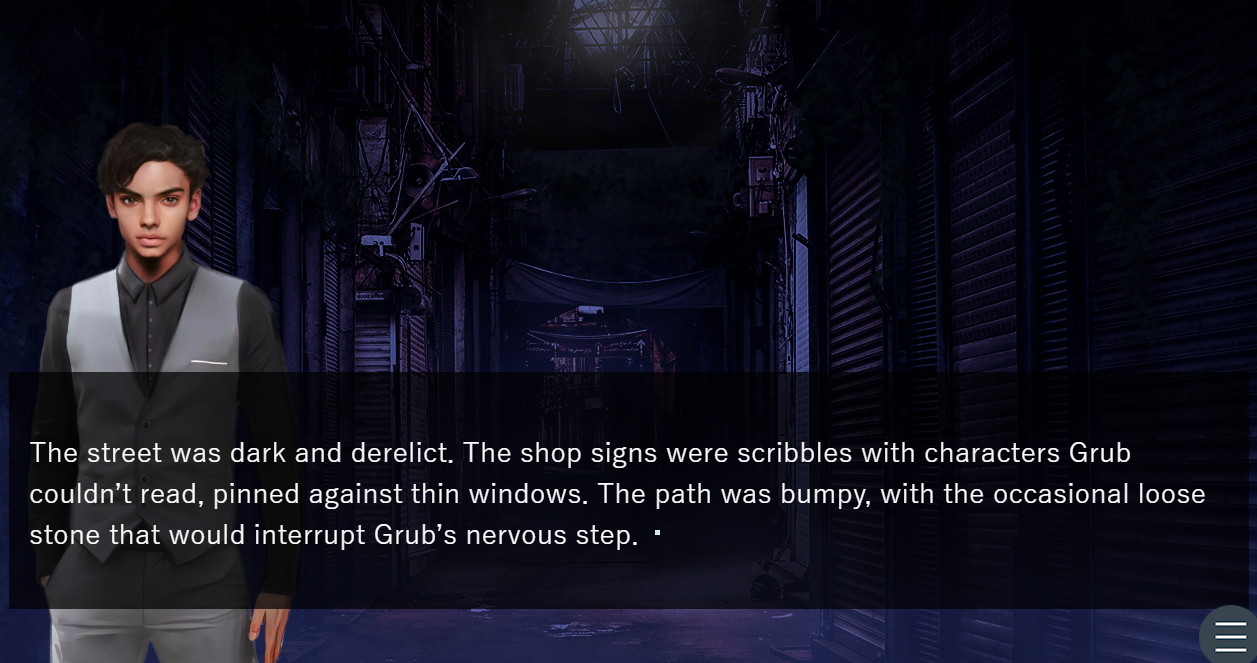 by Sailing Ocelot Studios
While many visual novels prefer to use anime style graphics for their characters and backgrounds, it is not a requirement of the platform. Sea Hears for example adopts a semi-realistic style, and uses a variety of styles for items and scene art.   Items are objects that may be of significance to the story, such as a letter or a gift. In Sea Hears, many of these items are painted in a watercolour style.   Scene art is art that usually takes the whole of the screen and depicts a special moment. In Sea Hears, the scene art may have a watery style for Meili's moments, and a haunted, scrawly style during a character struggling with their darkest secrets.   Art styles can make or break a visual novel, and are usually consistent.

The writing in visual novels is usually from the character's perspective and usually focuses on dialogue. Sometimes a visual novel might only contain dialogue! Other times, the dialogue will be heavy with some opportunity to read some of the main character's thoughts. Sea Hears uses dialogue, main character thoughts and third person description to tell the story. 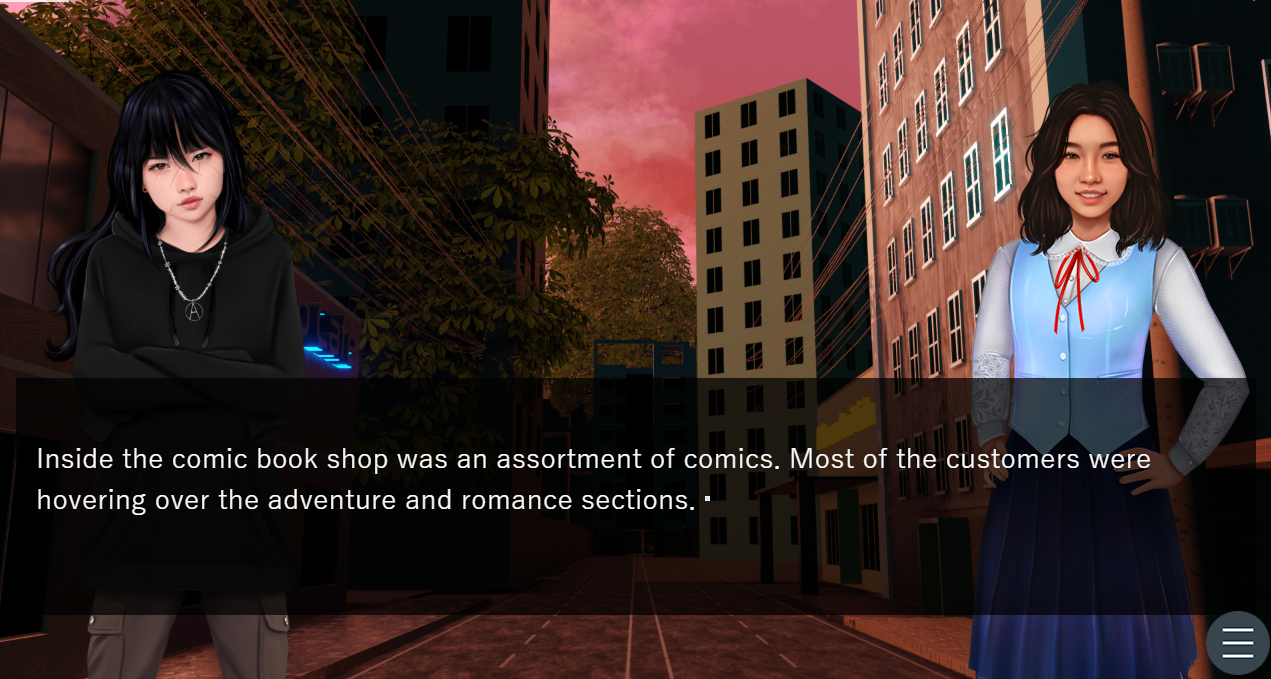 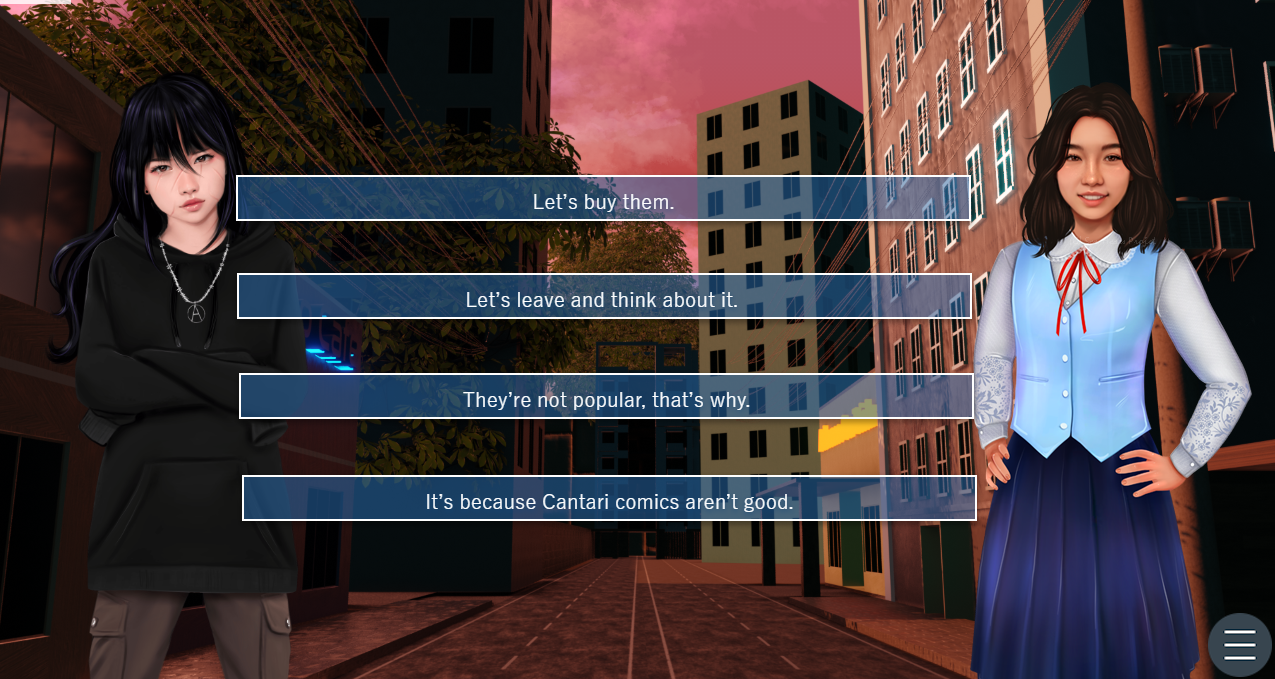 by Sailing Ocelot Studios
Many visual novels are enjoyed by the opportunity for players to select different options in the game. These options can change the proceeding dialogue, but may also add a value or trigger a switch in the gameplay, creating permanent changes in the story. For example, in the scene above, Annabel and Eleanor realise that Cantari comic books are not valued at all in Taru. Being from Cantari, Eleanor is disheartened to find the Cantari comics full of dust and unwanted. The shopkeeper offers them at a discounted price.   In this scenario, the player is playing as Annabel, and may make a choice. Will the player decide to use up some of their limited funds to buy the comics to make Eleanor happier or look elsewhere to spend their money? Perhaps the player would prefer Annabel to try to explain why no one buys the Cantari comics?   Values are attached to these choices. For example, suggesting that Cantari comics are simply not good will hurt Eleanor's feelings, and hence will tell the visual novel software to reduce the value of Eleanor's friendship stat. Later on, Eleanor and Annabel may behave differently, depending on value of their friendship.   Switches are also attached to these choices. If Annabel buys these comics, she now owns them. Later on, she might read them during her spare time. This scene is either possible, or not possible. Therefore, it a switch that has been triggered - it will be 'ON' if the item exists.   Not all visual novels have branches, and not all visual novels have significant consequences per the choice you make. In Sea Hears, the choices are meant to contribute to the ongoing development of your character's personality and connection with the world around them.

Many visuals novels have background music playing through scenes. Some also contain additional background sound such as the noise that crowds may make on the streets, or beach waves. Special sound effects may play during an alert, or an item being received.   Some visual novels have additional gameplay elements such as mini games. A common extra is also the ability to look at a gallery of images collected through gameplay. 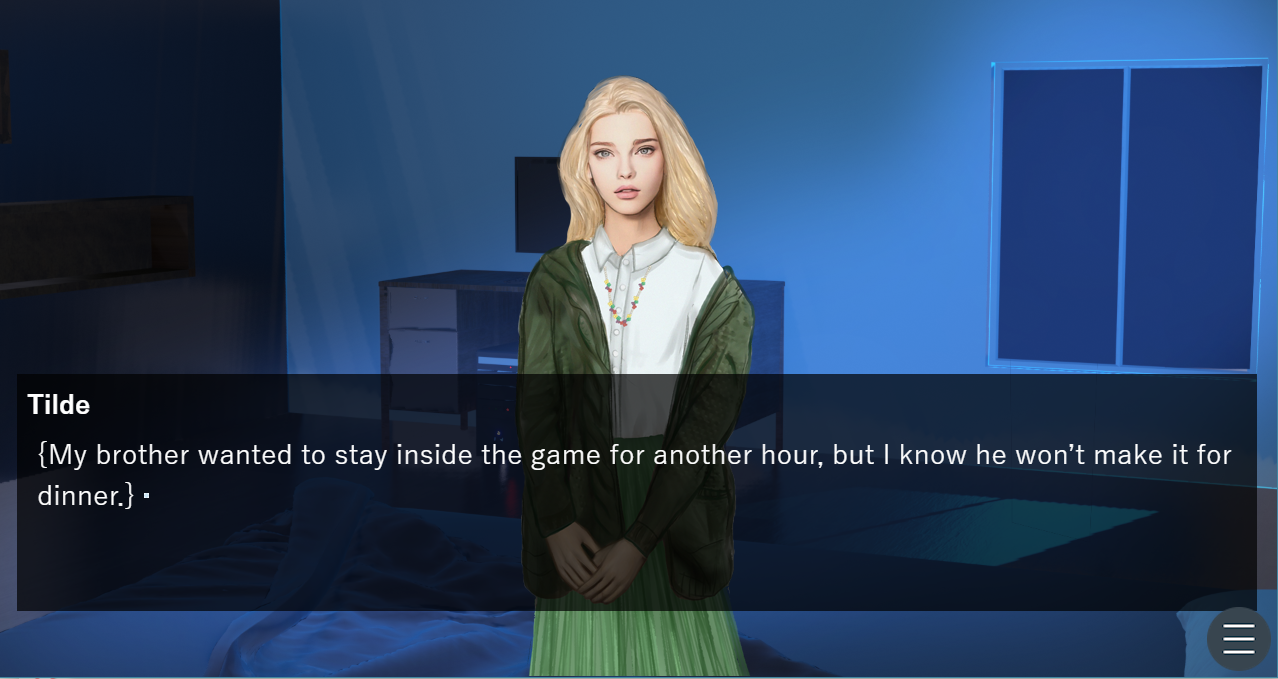 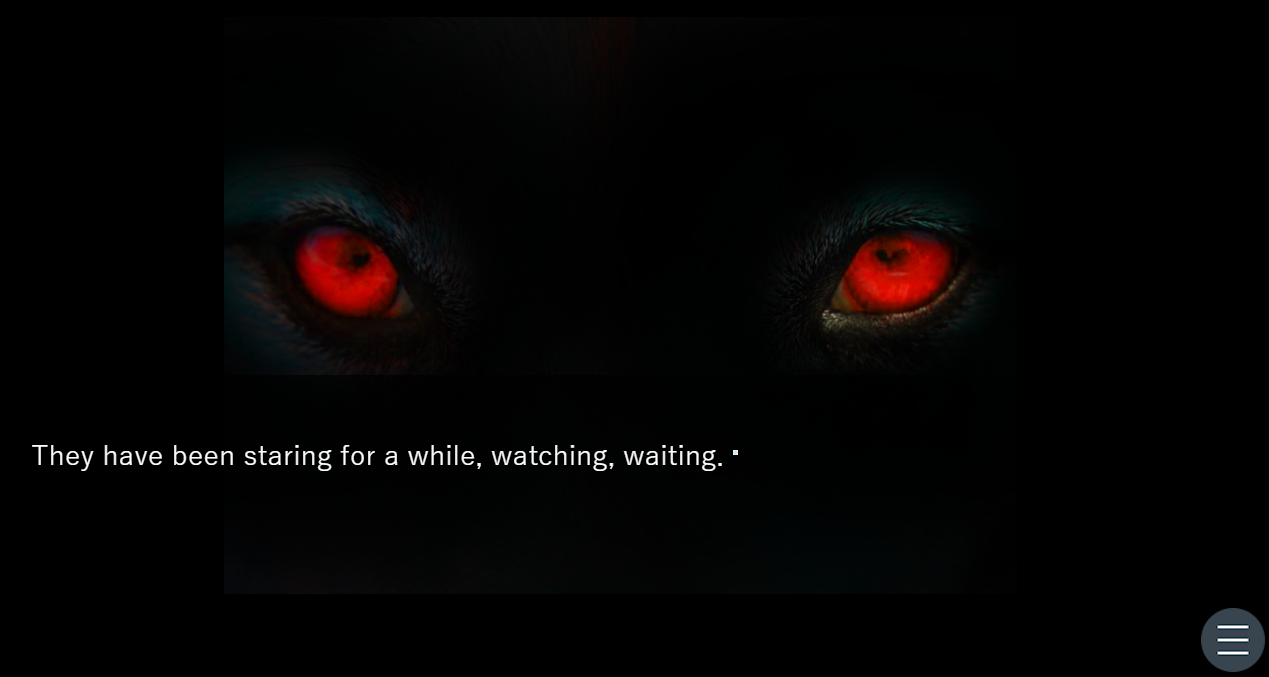 While many people may assume that visual novels focus on romance stories, visual novels can in fact vary immensely! The World of Darkness and Danganronpa encompass different horror genres, Ace Attorney is famous for its detective genre, and OPUS is a great sci-fi visual novel. Though it is without a doubt that romance visual novels tend to be the most popular genre, and can vary from soft romance to explicit 18+ storylines. Perfect Gold is a great example of a soft LGBTQ+ romance.   No topic of genre is out of the question with visual novels! Syntherapy is a visual novel with a futuristic setting on the theme of mental health and therapy. Sea Hears is a science-fantasy visual novel which can have elements of horror depending which character you play as.   You may also stumble upon games that are hybrids of adventure and visual novel, such as the award winning Life is Strange series.

How do you begin to make a visual novel?

If you're interested in making a visual novel, the first thing to do is to play some visual novels in the genres you are most interested in. This will help you understand the platform and the capabilities. You will need consider the vertical and horizontal aspects of your game. Your game becomes tall or vertical depending on how many different branches you have in your game. The taller the game, the more you are writing alternative scenes and dialogues depending on which branch the player has chosen.
Loading Flowchart example for visual novels Whiteboard...
Press the mouse scroll button to move around the whiteboard.   In this flowchart, you can see an example of a closed loop choice. The player has one of two choices to make. Both choices lead to a unique consequence, but then return to the normal flow of the game. In this scenario, this doesn't make the game too unmanageable and vertical, but the player may not feel their consequence had a significant impact on the game as a whole. If a consequence hits a value or a switch which impacts the game later on, that may be a lot of extra writing for you to do. So there is a balance of cost. What is most interesting for you about visual novels? The choices a player could make? The story of a particular character? Or something else?

by Sailing Ocelot Studios
You can't read the text here but that is very deliberate! This is my personal style of making a flow chart for my visual novel, and this example depicts Annabel's prologue! The red notes indicate switches that have been triggered from choices made in the game, the blue notes indicate variables, and the green and purple notes indicate items and money.   If you take a look at the firsrt choice you make, you may observe that it takes sometime for those two choices to reach the same point. The consequence of this is a lot of writing for me! But for the player, they can receive very different sides of the story. You may just about make parallelogram shapes in the flow chart. This is where I make the game 'check' a value and will give the player a different consequence depending on a variable developed or reduced on an earlier choice.   There are probably much more organised and tidier ways to make flow charts, but as I am making the game by myself, this works for me just fine. I highly recommend considering to standardise your style of organisation either way, as you may find opportunities to work together with someone else on your visual novel in the future!

There are lots of resources online about visual novels that you can take a look at. Itch.io is a great place to find upcoming games, and there are a lot of visual novels in early development available to look at on this website. The visual novel Reddit community is also very active. The most popular free to use tool to create visual novels is called Renpy and has an active community.   Be sure to consider following Sea Hears Project for more information on my science-fantasy visual novel, and consider taking a glance at the Patreon too ;)   Thank you very much for reading! Feel free to leave a comment if you have any questions!   Visual novels mentioned   Love Thyself: A Horatio Story - Endless Space // A free to play sci-fi visual novel in the dark Endless Space universe
World of Darkness Preludes: Vampires and Mages // A two in one horror visual novel in the World of Darkness universe
Ghostwire: Tokyo - Prelude // A free to play horror visual novel promoting the upcoming new Ghostwire horror game
Ace Attorney // A long series of detective visual novels based on an Attorney named Ace
Danganronpa // A horror mystery series
OPUS // An adventure sci-fi visual novel series
Syntherapy // A futuristic sci-fi with focus on mental health and therapy

This was super-useful for me, as someone who keeps hearing the term "visual novel" pop up but hasn't taken the time to figure out what they are. I get it more now and the visual storyteller in me has had his interest piqued. That said, the flow chart looks intimidating. I can tell how much work you must've put into that.