"It's definitely in the top 3 inns in a an insect carcass I've ever visited, well at least top 4. Also we don't really have a choice either we head to the maw or it's grandson will eat us while we sleep." Horvus the Handsome on The Mummified Maw

The Mummified Maw is situated by Gorguk's Grave, a beautiful oasis deep in the centre of the Kymash Desert in a region known as the Vermian Triangle. The opalescent Gorguk's Grave, a pearl of colour in an ocean of yellow sand is the only water source in the Vermian Triangle meaning that any travellers tranversing the desert that want to replenish a water supply are forced to head there.

While this would anywhere else make the Mummified Maw a veritable hotspot, the Vermian Triangle is known to be one of the most dangerous regions on Scidon home to two notable types of creatures; The desert dwelling tribe, the Xiros Orcs, known pillagers and famed warriors and, the subject of their mutual predation, the giant desert worm. However this location comes with a few other benefits. A lack of competition and the inability of any army to marshall across the Vermian Triangle has meant that no nation is able to realiably enforce taxation upon the one major business present there.

The Mummified Maw, the fine establishment of the Acidburnt family of Xiros Orcs takes the form of the hollowed out body of a particularly large specimen of the giant desert worm. The entrance the still many-toothed mouth of said creature that leads into a alehall and inn often full of rowdy biege skinned orcs. Over the past few generations since it was first established by the son of Gorguk Acidburnt the tough, dark magenta flesh has been gradually replaced with a fine Yronwood floor decking and interior walls, tables and chairs. The benefits of Yronwood being twofold, harder for the patrons to break and resistant to the powerful acid of a giant worms stomach.

As one enters through the maw they would find themselves in the open space provided for barfights, making their way through into the alehouse proper and past the bar, spiralling down below the rolling dunes, they would see the rooms for rent and further still in bowels of the beast the famous battlepit where regular blood sports are held. 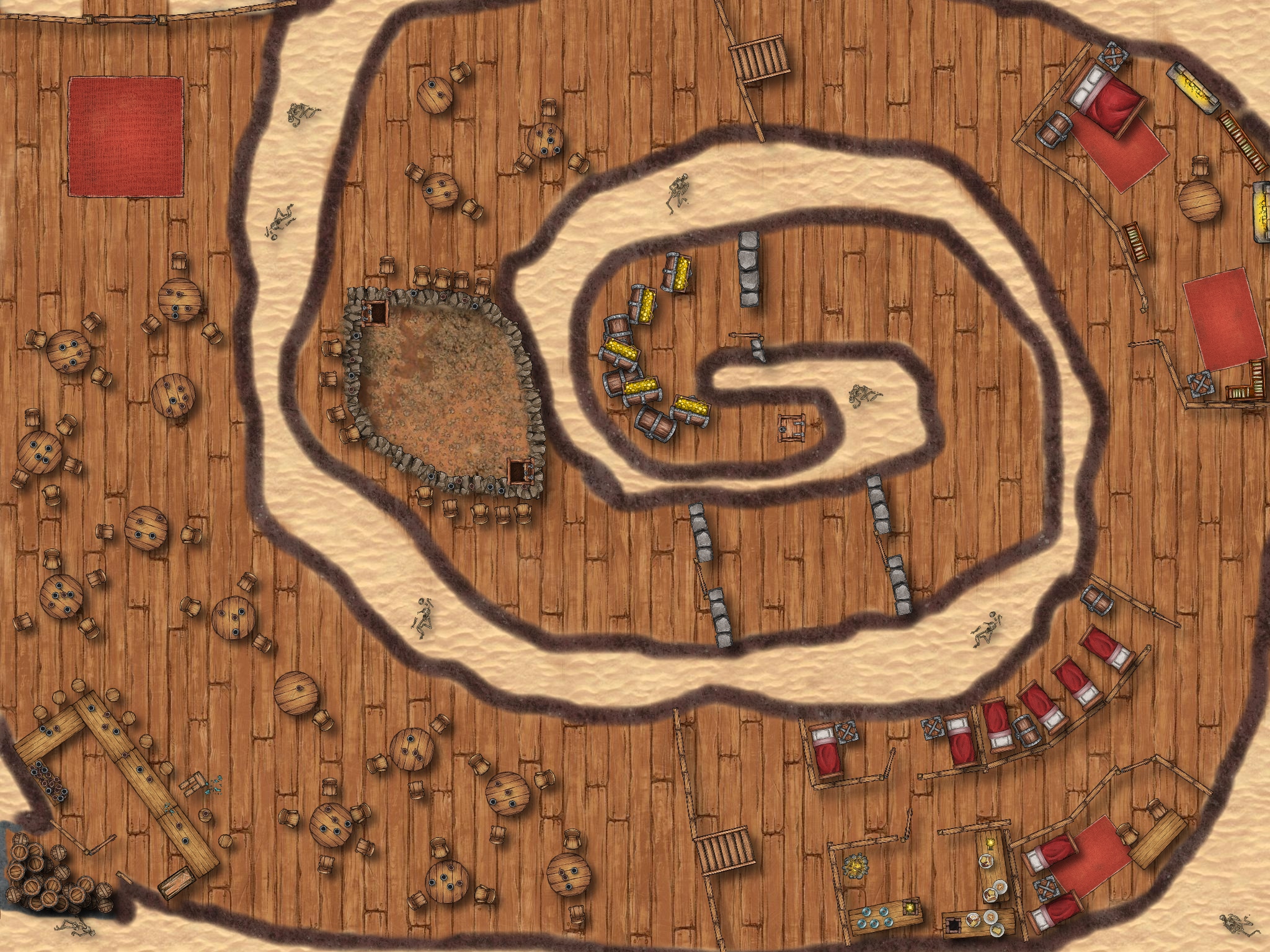 A layout of the Mummified Maw.

The current propriator Grugash Acidburnt is an unusually shrewd and almost civilised orc who has been trying to market the Maw to the spice and Ra'sang Silver merchants crossing the Kymash Desert. After inheriting it from his father after he was swallowed hunting sand worms he has tried to pivot away from the bloodsports for which the Maw is known by arranging performances from a number of famous performers, some of which even made it to tavern alive. He has also hired a distinguished new chef and other trained staff. He has even gone as far as to sent his son Gregory Acidburnt to the capital to apprentice with the merchants guild.

Grugash has also created an exhibition to his Great-Grandfather Gorgak Acidburnt, Xirosic hero the slayer of the giant sand worm in which the tavern resides and how he killed the beast from within and his sons cut their way inside to retrieve his mostly dissolved body and finally deciding to stay the night inside the corpse as the other sand worms wouldn't attack there giving the inspiration for the tavern.

Among those who frequent the Mummified Maw is Captain Xirug The Wrangler, the only one to have ever "tamed" a sand worm upon which his ship the Rumbling Death sails the yellow-white sea of the Kymash, pillaging and raiding far beyond the Vermian Triangle and disappearing back into the dunes before any serious force can be marshalled. Some say this has made him the richest orc in the history of Scidon and there isn't much place else for an orc to spend ill gotten coin.

For the past few years the tavern has also been home to one of Frakturia's most pre-eminent chefs, a Trograr Spinecrusher, a family name as he often reminds people. Lacking in the boisterous nature of most orcs and surprisingly well spoken with a fine Volitairian accent while he might seem out of place among the Xirosic orc tribes it's no more than he sticks out in the cities of man or elf, at least here he can be himself and experiment with the unusual ingredients of the Kymash to hear him say it.

Carcera, an elegant, ashen-skinned flame dancer of fire genasi heritage has been brought on both as a server and to perform as an opening before fights in the pits. One would expect someone of her talents to be found in one of the continent's metropolises, her willingness to remain here might have something to do with the slave tattoo on her shoulder, luckily after years of prosecution the Xiros Orcs don't recognise such institutions. 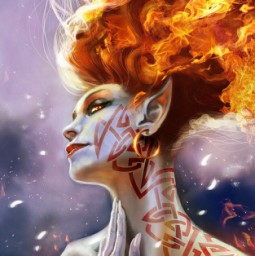 There is much opportunity to make some coin for the budding adventure. The Maw's kitchens are always looking for anyone fool enough to try bring them sand worm meat for their signature dishes or the acidic blood as the secret ingredient in their famous bright green Xoric Gin. Since the last of the flesh of the Mummified Maw itself ran out a generation ago the cuisine that build the place must be sourced elsewhere.

There is also always money to be won in the many fights that take place in the Maw, some of which are even in the pit. The only thing more numerous than the fighting is the betting, which often leads to more fighting .. which inevitably leads to more betting.

Trograr is always looking for new exciting untapped flavours that exist among the shamefully uneaten fauna and flora of the Kymash desert, sadly most of these fauna and flora resist ending up on a plate, many even want to return the sentiment.

The Maw swallows all sorts, as a place beyond the reach of laws other than the honour codes of the Xiros all manner of those who aren't welcome elsewhere or don't want to be found can find their way across the sands. Some of them even have coin on their heads. There is talk that the Dead Emperors, a famous group of bank robbers was heading through the desert and might need one last hit to afford a ship off the continent.

Charred desert worm carcasses and flashes of blue lightning in clear skies. These rumours have some worried, it seems there is a powerful dragon moving into the vermian triangle. A group of Xiros Orcs looking to make a name for themselves are said to be recruiting for a warband to put an end to this threat before it becomes established. 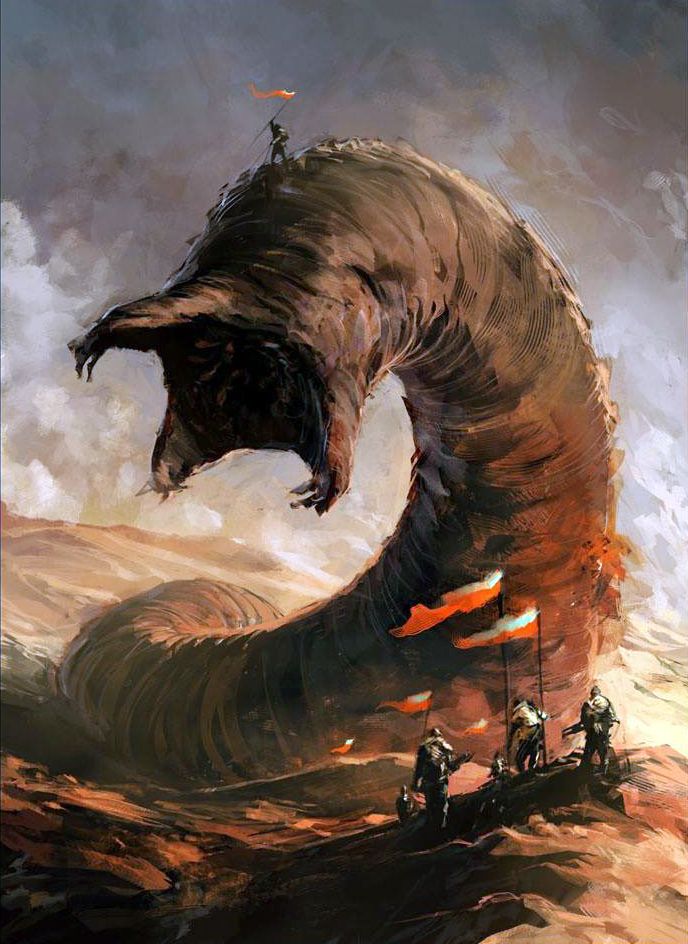 by Talipsisman on Deviantart
A Vermian giant Sandworm. These creatures are known to only breed within the region known as the Vermian Triangle, research into their biology is slowed by the deaths of most researchers. One of many brawls that take place daily in the Maw.
Type
Pub / Tavern / Restaurant 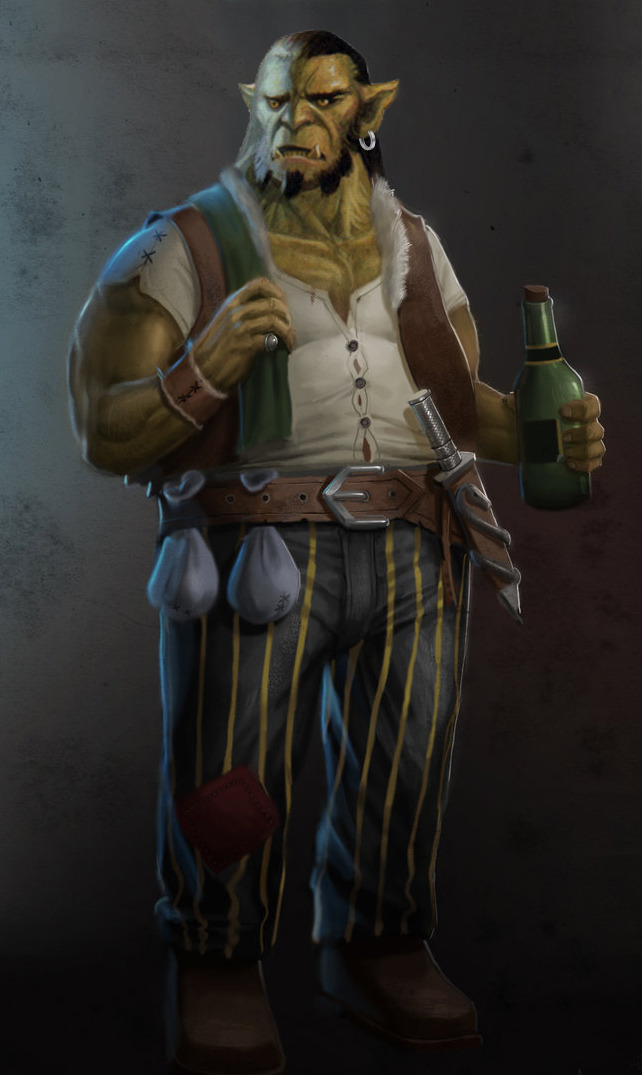 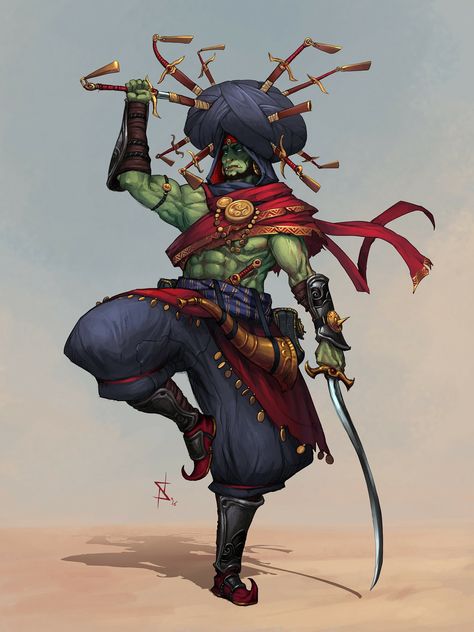 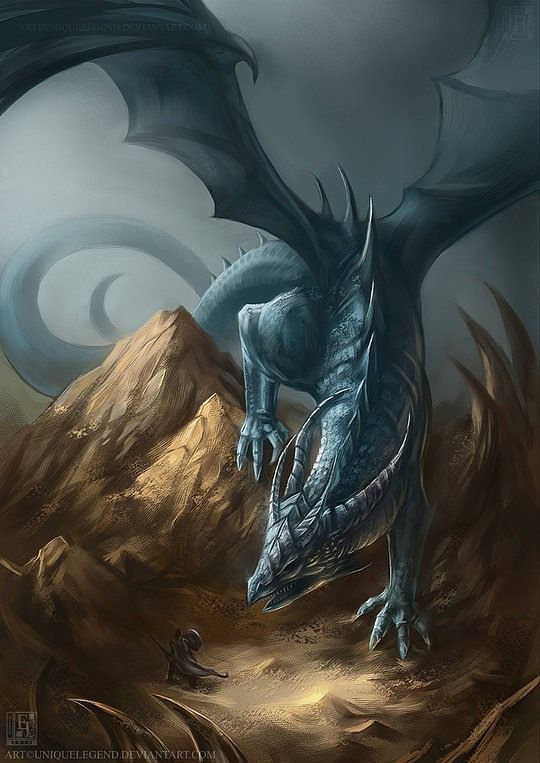 by image sourced from cruzine.com

Rumours of a blue dragon in the Vermian Triangle.

Okay that idea is frickin' awesome. Turning a giant monster corpse into an income source and base is just great. And the entire area and tavern sound delightfully dangerous for thrill-seeking adventurers.

Ha ha thanks, It was inspired by a DND session I ran where the party hid inside the body of a Purple worm to avoid fighting it's mate and one of them tried eating some of it.

Love the artwork that you have in this article, It is a very creative take on a tavern using a giant monster corpse! and lovely map you have as well!, I do want to know more about the staff and what can be served here, What kind of food and drinks and any rumors?   Overall a good article!

Thanks, I didn't want to fill too many characters into the tavern to leave space for things that tie to players and their backstories or into the campaign as my world is designed as the setting for my DND campaigns but I'll look into fleshing out the characters a bit more and I was working on making a menu in photoshop but have been busy with work so might take till after the challenge.

The title and idea of your tavern is hooking at once. I like the text and whee it governs su, but taking so many beautiful but stylisticly different pictures is rather distracting me. Also, the oasis in the picture never shows the carcass itself, the floorplan is very useful, but doesn't much the outside pictures. The Dune-istic aspects had me at the first glimpse :-)

Thanks for the feedback, I'm not really a good enough artistic to draw it myself in a way I would be satisfied with. I see what you mean in regardless to different art styles, I'll try to keep it consistent and maybe tone down a little on images in future or at least make them smaller and better laid out, still getting used to the UI.