Rikius Falenmir is an arcane archer of elven ancestry who fought in the Caelsimil Crusade against Teme-Rasadar. Native to Teme-Rasadar, he switched sides and eventually became a crucial player in the conflict. The actions of himself and his allies eventually lead to a peaceful resolution that brought the two nations together as the United Lands of Caelsimil Teme-Rasadar.

Tall and athletic with lean muscles and broad shoulders. He is extraordinarily dexterous and has a relatively hardy constitution.

Rikius has angular features with a strong jawline and sharp cheek bones, notably thick eyebrows, pointed ears, and a prominent nose. He has icy blue, deep-set eyes with a naturally piercing gaze. He usually sports a light stubble.

He and his wife both share a matching wristband tattoo decorated with maple leaves and lilac flowers.

He is left-handed and has a tendency to tap his fingers or feet when he is irritated or lost in thought. He is unusually hairy for his race and, unlike most full-blooded elves, is entirely capable of sleep (a gift granted to him by a goddess).

He prefers to dress smart and professionally. He has a sense of style that leans toward simplistic, avoiding excessiv flair that might come off as overbearing. He is especially fond of sport coats and button up shirts, and likes to accentuate with simple jewelry, especially necklaces and rings.

A native of Teme-Rasadar, Rikius was the second-born child and only son in well-off family of ten. His parents were considered leaders within their local community and had high expectations for all of their children. As a young adult, his family arranged for him to be wed, and he joined his nation's military in preparation for his future, where he proved himself to be a competent and capable leader.   When his relationship with his arranged fiancee proved to be abusive, the elf broke it off and threw himself into his work, which eventually lead to his relocation as he was stationed under one General Glaes shortly before the start of the Caelsimil Crusade against Teme-Rasadar. The two did not get along, and their frequent clashing came to a head during the conflict itself after Rikius strategically lost a fort.   He was branded a traitor and tortured before fleeing to Caelsimil to hunt down those he held responsible for his fall from grace. Instead, he worked as a double agent, assassinating his former superior before being framed for assassination in Caelsimil itself. After the true plot was revealed, he was fully pardoned by the Caelsimil government. His expertise was instrumental in the eventual ending of the war.   He was later wed to one of his former targets and eventual allies, Zakina Kociak-Falenmir. A Basilian princess at the time, the two now rule together as King and Queen of the island nation.

He received a traditional public education in his home city of Le'more, with private tutoring and specialized classs supplemented at the expense of his parents. He underwent arcane training under a wizard apprenticeship and showed a keen interest in archery that eventually led to him specializing as an arcane archer.   He received army training through the Teme-Rasadar military, and spymaster training in the Caelsimilian military.

He spent several years as a soldier in the Teme-Rasadar military before his eventual promotion to Commander. Once switching sides, he worked as a mercenary and a Spymasterin the Caelsimilian military for several more years before resigning his position.   He now works as a teacher and acts as both King and personal advisor to the Queen of The Isles of Basilla.

He was an accomplished leader in the military with a long list of successful mission and mercenary work, and played a crucial compenent in brokering peace between Caelsimil and Teme-Rasadar at the end of the war. There was discussion of having Rikius act as a King figurehead after the conflict officially ended, but the role was eventually deemed unecessary.   He has traveled both the inner and outer planes extensively and is considered a masterful arcane archer with complex knowledge in his craft. He possesses magical and supernatural capabilitis considered to be divine in nature.   He is a proud and loyal husband and father with an adopted daughter, along with biological children of his own with his wife, Zakina. Together, the two rule as King and Queen of the Islands of Basilla.

Despite his list of accomplishments and the eventual peace between the two nations, there are many of Teme-Rasadar heritage that consider Rikius to be a traitor to his nation.   He has been tortured on several different occassions and while the physical scars have long faded, the mental impact has left a lasting impression on Rikius.

Rikius suffers from post-traumatic stress disorder related to the Caelsimilian and Teme-Rasadar military conflict, along with the physical torture and mental anguish he was subjected to throughout the experience. His symptoms include panic attacks, depression, bouts of paranoia, and intense episodes of depersonalization and derealization.

Rikius is primarily motivated by a desire for knowledge that drives his natural curiosity. He seeks to learn as much as he can in order to understand the world around him, and is driven by his familial upbringing, which instilled a sense of ambition and values sucess and mastery.   He is also motivated by the ideals of duty and responsibility, and is compelled to protect and provide for those he either feels responsibility for, or has forged a strong bond with.

He is physically and mentally perceptive, and capable of easily picking apart details and discerning lies from truth. He has a vast array of knowledge and is considered highly intelligent. He is trained in arcane magic, archery, and swordplay. He possesses excellent leadership capabilities and superb survival skills thanks to his military training.   Because he is blunt and direct, he can come off as callous or cold, and he is usually a bad liar. He considers himself a man of logic and rationality, and has difficulty recognizing his own emotions, let alone interpreting others'. He struggles with diplomacy, and is easily irritated.

He values ambition, knowledge, perserverence, and success. He takes pride in his work, loves his family, and naturally adores children. His hobbies include drawing and sketching, cartography, and archery. He enjoys wine, dark chocolate, and pomegranates.   He is easily irritated by loud and distracting environments, and gets overwhelmed by messy emotions. He does not tolerate impatience, incompetance, or clutter. While he finds sorcerery fascinating, he is frustrated by its inherent nature. He can't stand the rain.

He is responsible, hard-working and diligent, as well as honest, devoted, patient and loyal. He is fast learner and delights in learning and sharing knowledge with the world.

He can be stubborn and often inflexible. He is easily annoyed, quietly arrogant, and has a tendency to make snap judgements about others, though it is something he has actively and successfully worked on improving. When he is conscious of his blunt and intimidating demeanor, he can sometimes overthink, leading to excessive caution that comes off as overly-polite and phony. He has a tendency to lecture others.   He maintains an on-again-off-again addiction to alcohol - particularly wine - and tobacco/nicotine.

He sits with a straight, stiff posture and will sometimes click his tongue in irratitation, or when he is lost in thought. He can maintain intense eye-contact and often glowers at others, intentionally or not.

Good hygeine and organization is of utter importance. He cannot tolerate a disorganized space, whether in his professional or personal life, and keeps his own appearance well-groomed and as immaculate as possible. He recognizes the importants of presentation and first impressions. Some brand him a neat-freak.

As a commander in the Teme-Rasadar military, he was briefly engaged to Sephi and worked under abuser and former General Glaes, now deceased. He presided over soldier Samuel Len, who he had a tense and bitter relationship with, until they both defected to Caelsimil.   As a spymaster, he worked closely alongside Industria Cellini, Elathera Clearwater, and Xaren Myrin'ta, who he now considers friends, along with Vihrea (deceased), Samuel once more, and his now-wife Zakina Kociak-Falenmir. His superiors were Rick Thaddeus (assassinated by Sharon) and, after his passing, his brother Rudy Thaddeus.   Other friends include Lucky Kociak, Paxton, Triss Palomar, Clover Karith, Catrina Karith, and Louhi. He is tense allies with Jordeira Ferus.

He is an avid fiction reader, and also enjoys drawing. In particular, he likes to sketch his surroundings. He is fascinated by geography and loves cartography by extension; he is a novice cartographer himself. He also likes to study and read nonfiction in his spare time. He enjoys being outdoors unless it's raining. He can play the piano, but does so very rarely.

Zakina was a strange, obnoxious thorn in Rikius' side at first. Being that she was the only one to show him compassion rather than coldness or tense cordiality after his life was flipped upside down, he started to quietly appreciate her company. Her affections were overwhelming and he pushed them away at first, but after months of casually fooling around, the pair officially became a couple over one too many glasses of wine.   Rikius was surprised at himself for initiating and Kina was utterly convinced he was pulling her leg and would run for the hills any day now. They weren't public with their relationship at first, but it wasn't hard for anyone to figure out after a certain point. They've been through hell and back with one another, always looking out for each other. After a few years and two kids, the pair got married.   They have their spats as all couples do, but at the end of the day, these two would die for each other.

Rikius is very fond of learning about magic and because of how often he talks about it, Kina has also grown extremely curious about it. Beyond that, they both enjoy each other's company, even when there's nothing but a comfortable silence between them. Wine is another favorite of the couple's, especially when paired with a quiet evening full of gentle touches and sweet nothings. They also enjoy reading and doing yoga together.

Paxton, who was a lonely doppelganger they met while trudging through the swamps days out from Florence. He's small, kind, and awkward. He will ramble on about anything and everything. He's also a necromancer and was once in a cult devoted to Vecna. Now he spends his time traveling to collect knowledge on all sorts of things, but makes sure to visit the couple often. 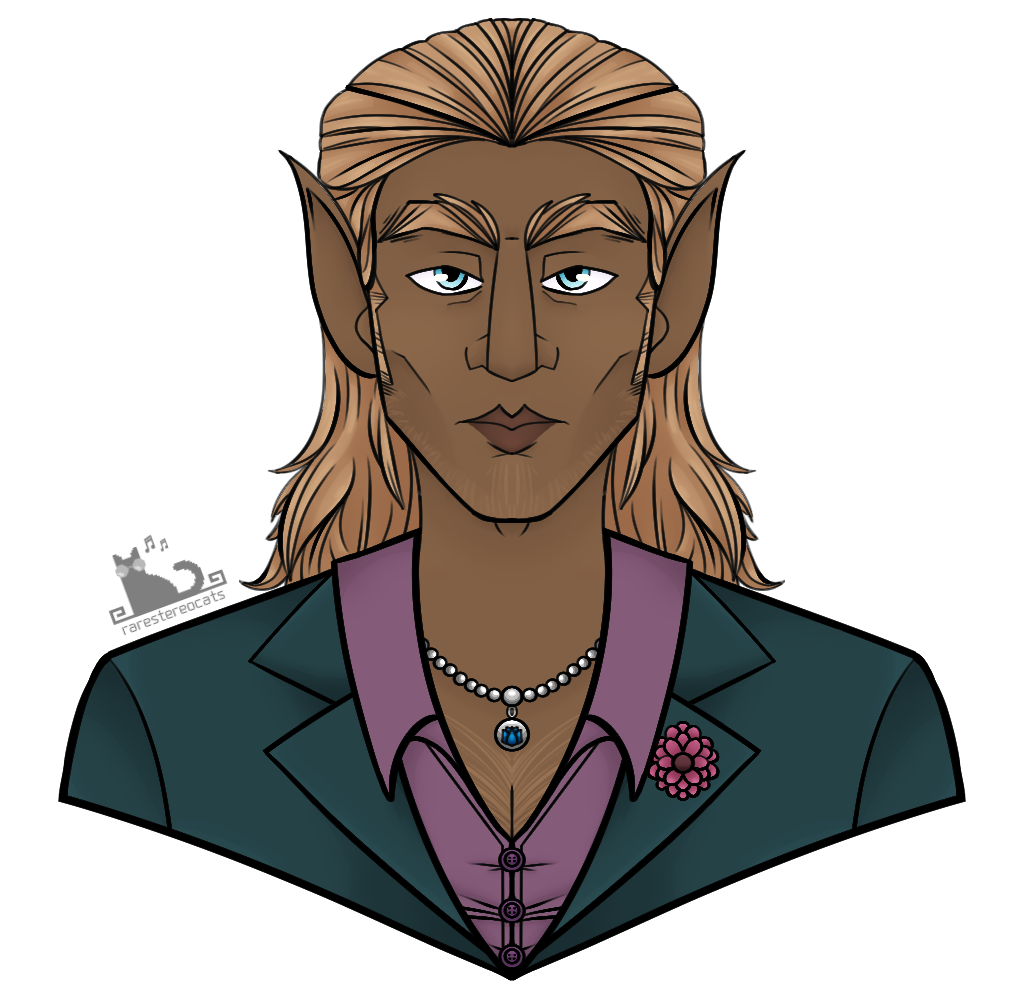