A former cultist and paladin of The Nameless One. He was captured and kept as an undead slave for a century. After his master was defeated and he was freed, he began to hunt down his master's abominations, as well as other monsters. Jordeira is the founder of Necropolis and a current member of The Grayveils.

Jordeira is heavily muscled with some body fat. Immune to disease and unable to suffer from the effects of exhaustion, he has a limitless amount of stamina. His build is unnaturally strong, but he carries himself with a certain level of grace that's unexpected for his size.

His skin's stitched together like a patchwork quilt, the original pieces of his body branded with symbols and runes associated with The Nameless One. One such symbol is an eye within a pyramid, something that is associated with the occult and Iolond.

He has a very strong jawline with prominent features. His lips are very thin and he has a Roman nose that's crooked after being broken so many times.  His square chin juts out and has a dimple. He has dull, sunken eyes.

His hulking stature that makes him stick out like a sore thumb, his lack of irises, as well as the signs of undeath.

He has a determined gait with long strides, often dragging people behind him because they struggle to keep up. His posture is very rigid and he stands completely straight. When he's experiencing anger or panic, his muscles tend to spasm, the most noticeable being his eyelids. Jordeira has a semi-permanent scowl affixed to his face to look intimidating. Due to his insecurities over his height, he wears heels in an effort to tower over others.

It's hard for him to find clothes that fit and his physique is difficult for tailors to work with, so he has a tendency to wear leather and armor at all times. When in casual situations, he likes to wear loose blouses paired with leather pants and a few belts to hold multiple daggers.

Jordeira was orphaned at a young age in Felidae after a plague killed his parents. He wasn't only responsible for himself, but for his sister as well. The pair were plucked off of the streets by Madeleine Ferus and raised within the ranks of The Disciples of Ruin. He did everything in his power to keep his sister safe, which meant that most of Madeleine's abuse fell on him directly. Jordeira became her favored student and was next in line to be the Speaker of Shadows. For his dedication and skill, he was stripped down and branded with runes tied to the cult's demented god.   With how quickly he was moving up the ranks, Madeleine grew to fear her inevitable death. As a last resort to keep her power, she sent Jordeira and Yondira on a suicide mission. They were to track down an elusive lich, Ariamis. He was to die for allegedly hoarding knowledge that belonged to the cult. Tracking him down was easier than Jordeira had anticipated, but he quickly realized he was in over his head. The Ferus siblings were captured, tortured, and experimented on daily. Jordeira killed his sister in an act of mercy, freeing her from their torment, but unknowingly giving her soul to the Nameless One.   Jordeira was one of many subjects in an effort to create stronger, intelligent undead. For the next century or so, he served as Ariamis' bodyguard and executioner against his will. He killed himself often, but was denied the release of death every time. His life would ultimately change for the better after encountering Lucky, Zakina, and Rikius. With the defeat of his master, Jordeira tracked down the rest of his abominations and killed them. He teamed up with Kataledaris after she was reanimated under mysterious circumstances. The two traveled and hunted monsters together, one such hunt reuniting him with Lucky.   When he was alerted to the presence of multiple liches in the Masoud Desert, he worked alongside Lucky, Zakina, and Rikius once more, as well as Industria and Elathera. After toppling Milan's plans, he continued traveling with the others, growing close to Industria and marrying Lucky. He's the founder of Necropolis, which he built on the remains of the abandoned town of Atrani. With Lucky's help, the pair formed The Grayveils, and aligned themselves with the Order of the Oracle's Eye. Jordeira is also the founder of the Kronia Academy for Hunters, a school for training future monster hunters.

Jordeira never had the opportunity to receive a formal education while growing up. When he was taken in by the cult, they taught him basic skills and knowledge to survive, but anything more that he learned was discovered on his own. As such, he enjoys learning about all manner of subjects and is quite intelligent.

The use of mind-altering magic, bringing harm to those who are unable to defend themselves, using necromancy for corrupt reasons, expecting monetary gain for good deeds.

He's pushed forward by a desire to seek redemption for the atrocities he's committed in his life. Though a noble goal on the outside, it's done selfishly so the world stops viewing him as a monster. He's happy to help those in need and will do so for nothing in return, but all of his work leads to him killing something or someone.

Jordeira is a surprisingly talented craftsman, his specialties being traps and toys for kids. He can craft poisons as well, his knowledge coming from his former master who was skilled with anything alchemical. Occult knowledge is something he has and knows how to find, but he's reluctant to do so because of his past. He's an incredibly intelligent man and uses that skill with hands-on work such as engineering. And when somebody needs an intimidating presence for whatever reason, he's the right guy for the job.   He has terrible social skills even when he makes an effort to communicate like a functioning member of society. He has an awful grasp on languages outside of what he's already learned. Animals are something he's not very fond of and as such, he can't handle them well at all. This leads to frequent attacks from the local wildlife because of his threatening presence, but domesticated pets tend to gravitate towards him once they sense his discomfort. While smart, he's not a wise man and that leads to reckless behavior and plans that don't really amount to anything.

Jordeira is an incredibly intelligent man when it comes to traditional forms of education. He isn't materialistic in the slightest, so he has no problem giving his wealth away to those who need it. While he's capable of formulating plans and thinking strategically, he prefers to act spontaneously for the sheer thrill of it. He's always chasing the high from an adrenaline rush, so he's not the sort to turn down a mission even if it has several risks involved. Jordeira, despite the tough exterior and blunt honesty, is sensitive and in tune with his softer side. He's a hopeless romantic and quite corny about it.

Jordeira is temperamental and it doesn't take much to offend him. His sensitivity is both a gift and a curse, so while he has no problems being honest with others, he doesn't always appreciate their honest opinions of him. His moodiness can lead him to be callous towards others and he doesn't bite his tongue for anyone aside from a few trusted individuals. Jordeira is oftentimes arrogant and sometimes downright ignorant, only adding to the prickly nature others see. Due to his disdain for planning ahead, his attempts to find some kind of thrill in life are reckless and he tends to jump to violence too quickly.

He finds it hard to sit still for long, which causes him to bounce his leg or clear his throat obnoxiously when he's feeling impatient. Due to his sheer size and strength, he tends to move very carefully to prevent himself from breaking anything.

Jordeira does his best to keep his hygiene at decent levels, especially since he's a walking corpse that interacts with mortals on a daily basis. To hide the vague smell of rot, he lines his armor and clothes with dried herbs and flowers.

Jordeira has an incredibly complicated relationship with religion. Years as a paladin of the Nameless One have taught him that the gods are fickle, selfish, and manipulative beings. While he'd like to be spiritual for a sense of personal comfort, he's turned his back on the concept of organized religion.

Jordeira is unapproachable by a majority of people. He has a demeanor that makes him seem cold and when given the chance, he tends to prove that with his painfully honest opinions. He has no qualms about hurting someone's feelings because he isn't comfortable with lying to their face. He can be polite and well-mannered when it's called for, but for the most part, he says whatever is on his mind regardless of the consequences.

His hobbies include puzzles, gardening, trap crafting, and toy making. He has a single cat named Sprinkles, who mainly belongs to his daughter, Bella. 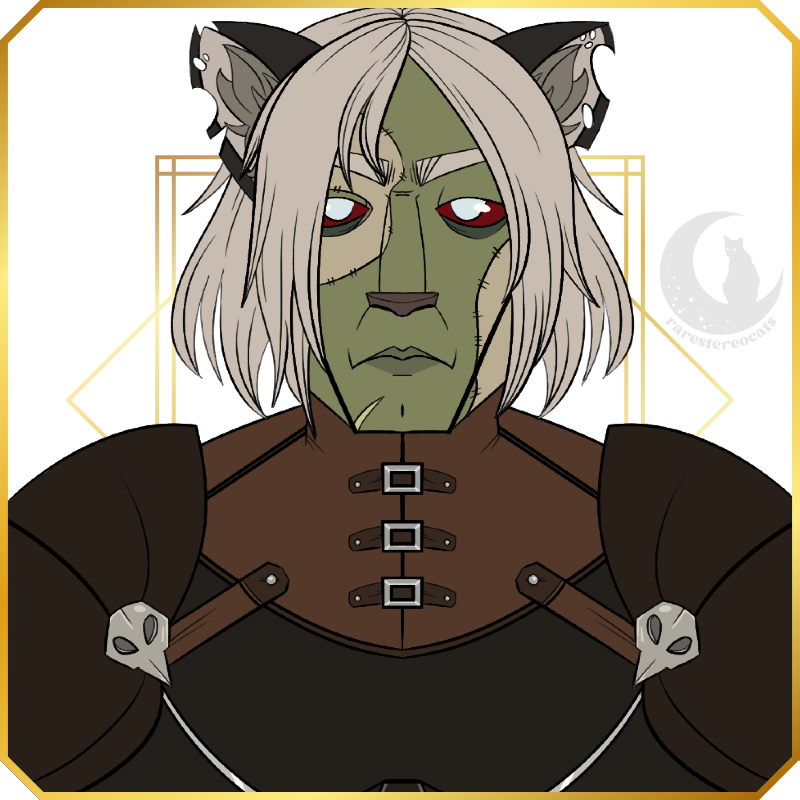 This website uses trademarks and/or copyrights owned by Paizo Inc., used under Paizo's Community Use Policy. We are expressly prohibited from charging you to use or access this content. This website is not published, endorsed, or specifically approved by Paizo. For more information about Paizo Inc. and Paizo products, visit Paizo.   All images attributed with links to Unsplash or the personal websites of any of its employees are licensed under the Unsplash License.
Character Portrait image: by Frankie Valentine
Article template
Character
World
Pathfinder: Crusades
Category
Main Party
Author
rarestereocats
Publication Date
11 Feb, 2021
Creation Date
20 Jan, 2021
Last Update Date
18 Aug, 2022
Visibility
Public
Views
166
Favorites
Comments
0
Tags
pc companion zombie undead necropolis fighter