A stasis field generator is an Enclaver artifact which produces a time dilation field encompassing a certain area. A piece of paleotechnology which is currently beyond the ability of Starweb civilization to recreate, stasis generators are valuable and often-sought-after finds when discovered amid the ruins of Claver space. Time inside the field of these devices can be slowed to the point where billions of years outside equates to mere seconds inside its area of effect.

Like most pieces of Enclaver high technology, stasis field generators look not unlike a rectangular bismuth crystal, with glowing lines and shapes embedded into it. The innards are equally mysterious, some sort of complex crystals, dust, and solid components of unknown function, and can no more be made to work again after being dismantled than an ancient Roman could repair a television screen after smashing it open. Fortunately, a lack of understanding of its principles does not preclude people from operating it, control mechanisms were devised largely by trial and error with the first few examples recovered. Stasis field generators appear to come in two types of various sizes. The first is an external "case" or "box" type, where a bismuth-like frame surrounds a field volume which is accessed through one or more open spaces. When activated, the stasis field appears inside the device and its contents are subject to it. By using a control interface connected to the frame, the field can be deactivated and its contents removed. This is considered the less-desirable type of stasis generator since sufficient damage to the frame will deactivate the field. 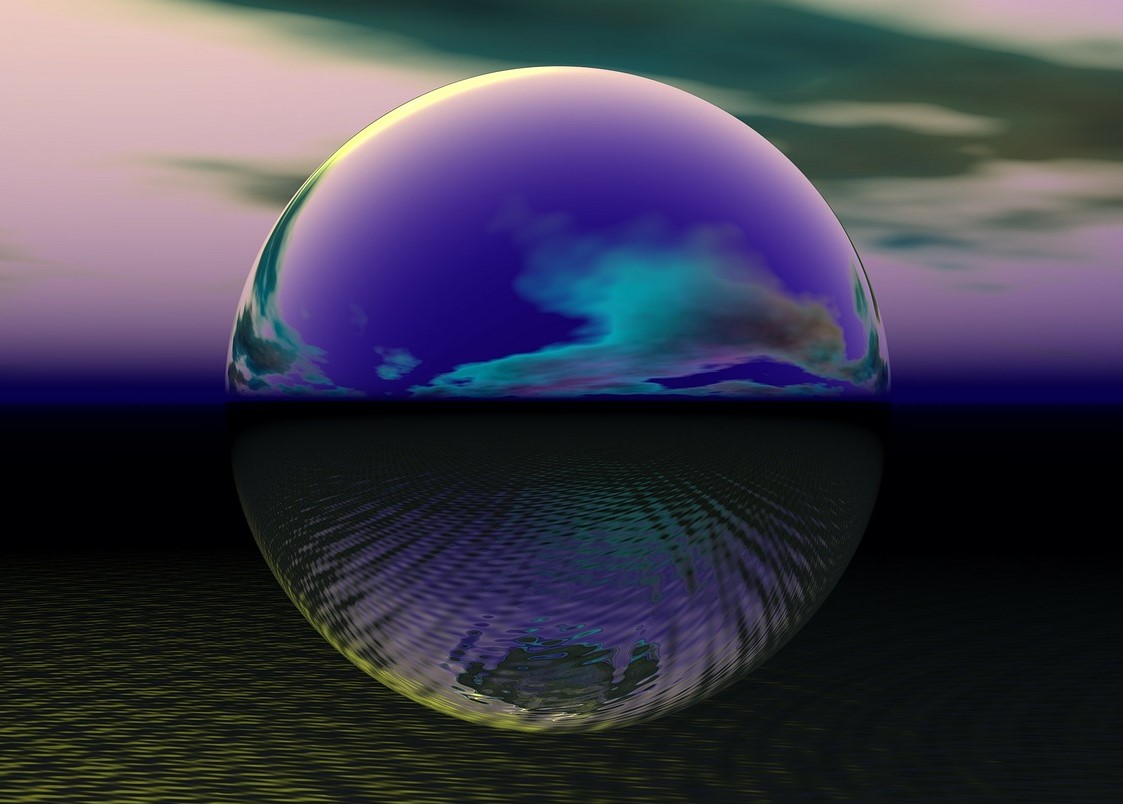 by Pete Linforth
An active Claver stasis field often
resembles a reflective sphere.
The second version is a "projector" type creating a field encompassing a preset volume and the generator device itself. This resembles fairly closely the "force shields" of ancient science fiction in that the simplest shape for their stasis field is a sphere. These projectors are coveted by many and worth a great deal of money on the paleotech market, the Existential Risks Directorate also watches their distribution and ownership lest their power fall into the wrong hands. Perhaps the most famous use of these stasis projectors is as shields for spacecraft: with the field engaged, its reflective surface will repel all electromagnetic and kinetic weapons fire for as long as it is maintained. The disadvantage is time for the ship inside the field stands virtually still, hence the user can only set it to go on for a certain interval and hope it does its job. While shielded, the ship cannot deploy any weapons not already outside the field nor can it accelerate itself, it will follow a ballistic trajectory. Thereforce, stasis shields are usually used in controlled bursts, for just long enough to neutralize incoming fire and not so long that an enemy can plant bombs nearby set to go off as soon as the shield drops, or take the shielded vessel under tow and throw it into a sun. The field parameters and duration are controlled by a computer, with dedicated timers ticking over billions of times a second to control lowering the field after it is raised. This presents another vulnerability, as a virus introduced into the control system can be triggered to activate the stasis generator with no set ending duration. By the time the crew realizes what has happened and deactivates it manually, they may find themselves billions of years in the future.
Ships equipped with Enclaver stasis projectors often also configure them to act as containment for a fusion torch or other powerful propulsion system, either by projecting a hollow cone-shaped stasis field behind the ship as a rocket nozzle or by briefly encasing the entire ship while an external propulsion source (such as a fission or fusion detonation) is fired. In both cases, virtually all heat and radiation from the drive system can be directed away from the ship, greatly reducing shielding and cooling needs.
Paleotech