Eisenhower is a planet orbiting a flare star, originally settled by Ancient America as an American Refuge World during the Wormhole Rush. It subsequently joined the American Federation during the Second Interstellar Period and was devastated by planetary bombardment in the Age of Strife. It has a human-majority population descended from the original colonists, who have rebuilt a civilization to pre-transistor technology.

Despite its Terran-like gravity and post-terraforming atmospheric composition, this is not an easy world to live on. The vast majority of the surface is windswept desert broken only by a single circular ocean and three smaller seas, with no polar icecaps. Its primary is Roosevelt A, a bright K-type star notable for its extreme flare activity. At irregular intervals, the planet is struck by flares which bathe it in enough ionizing radiation to deliver a lethal dose to unshielded human standing on the surface in under an hour. This takes the form of charged particles and hard x-rays which crash against and through the atmosphere during a flare, turning it a tantalizing but deadly purple.
Evidence, including fossils and oil deposits, suggests the planet was much more habitable in the distant past, perhaps its sun grew more tempremental as it aged. What indigenous life there was appears to have never reached the complexity of macroscopic animals, and was largely wiped out as flares eroded the atmosphere down to a thin wisp. Only a handful of hardy lichen species remained prior to terraforming, becoming the "red weed" which can now be seen covering unused areas of land.

Most surface area constitutes "the Wastes", vast expanses of desert devoid of habitation. Water is confined to four main seas along with their surrounding lakes and rivers, forming patches of fertile land. The largest body of water, the Forsaken Ocean, is surrounded on its coast by ruined cities and other artifacts of the planetary civilization destroyed during the Age of Strife, the modern inhabitants do not often go there. Instead, populations are concentrated around the other three seas, a region which sustained little direct damage from relativistic strikes and hence is still suitable for habitation.

One of several Refuge Worlds colonized by Ancient America during the Wormhole Rush, Eisenhower was intended as a fallback location to ensure the survival of some form of American civilization no matter what disaster might befall Terra's civilization. Its hostile environment is a feature, not a flaw, of this design—what enemy would think to look for humans in such a harsh place? The original colonies consisted of domes, pressurized buildings, and underground structures until a terraforming effort commenced in the post-recontact period. This project took a total of about fifty years, building up a near-Terran atmosphere projected to remain habitable against solar weathering for tens to hundreds of thousands of years.
As a member of the American Federation it participated in squabbles, power politics, and wars alongside the other American worlds, against their longtime rivals in the Celestial Union. This was the First Interstellar Age, an era of strife as feuding powers jockeyed for dominance backed by a strategy of mutually assured destruction with relativistic weapon systems. Eisenhower maintained one such system, the Federal Interstellar Arsenal, and developed a doctrine known as the Fimbulwinter Protocol, capable of eliminating all intelligent life on a planet. This and other actions gained it a reputation for militarism. 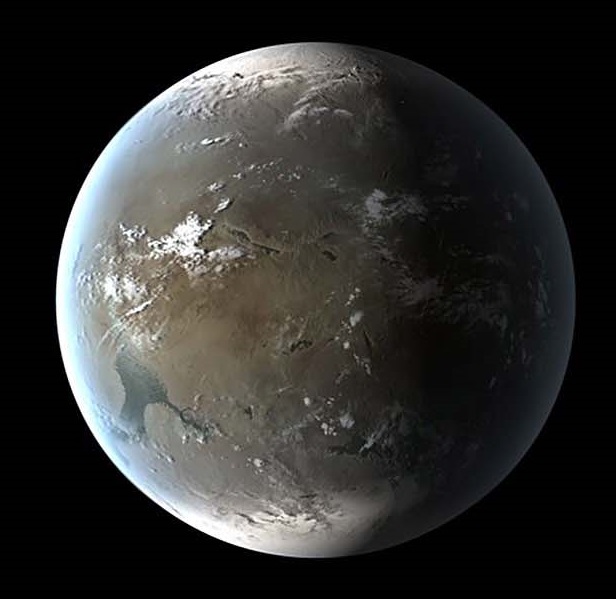 Perhaps inevitably, the neverending parade of wars triggered an apocalyptic crisis when threats of mutual destruction turned into reality. Eisenhower's space force executed the Fimbulwinter Protocol against several Union planets, carpet-bombing them with projectiles moving at near lightspeed. The Chinese-descended world Yushan was completely depopulated, and multiple others suffered billions of deaths each. Retaliatory bombardment hit Eisenhower in turn, devastating surface settlements and lifting enough dust into the atmosphere to block out the sun.
Interstellar civilization fell into a dark age lasting over two centuries as technology bases regressed, space habitats collapsed, and relativistic warfare continued as nations kept getting hit by strikes delayed years or decades by light-lag. Ever since, it was assumed Eisenhower's population had perished since with their cities destroyed, any survivors would be unable to protect against solar flares and maintain the industry required for survival on such a harsh planet.

The Age of Strife ended with the formation of the Stellar Compact, and interstellar civilization began to rebuild. The people of Eisenhower, thought long-dead by everyone else, remain unaware of this and many believe themselves to be the last humans in the cosmos.

Eisenhower's societies are currently at a middling level of industrial technology, with vacuum-tube electronics being state-of-the-art and transistors remaining un-reinvented. Most energy is derived from atomic fission or fossil fuels, the latter being rationed in order to preserve limited reserves for necessary uses such as agriculture. Hence, most people live in cities where electric mass transit is possible, and free-standing houses are rare. Private cars are scarce as well, gas ration books are only given out to those who can demonstrate a clear need.

Virtually no aspect of life on Eisenhower is untouched by its sun's frequent, deadly flares. Radiation shelters are ubiquitous, ranging from makeshift bunkers dug underground and covered with a meter or so of packed earth, to entire subterranean houses with all the usual amenities, or even convertible subway platforms. All dwellings are mandated to have enough shelter space for expected occupants, plus extra in case passers-by need to take refuge as well. In countryside farmhouses or city townhouses, these can be shielded rooms in a basement or yard, while apartments will typically have one or more communal shelters located under the building. Workplaces and public buildings will have shelters too, for those unable to get home before a flare arrives.
Children are taught from a young age to recognize flare warning sirens and how to best protect against radiation: in a pinch, a drainage culvert or overpass can provide shelter if one is caught in the open when a flare hits, and about ten minutes of dosage can be taken if needed to reach safety. Laws dictate one must offer shelter space to people in need of it, refusal to do so constitutes a heinous crime for which, in olden times, the punishment was exile to the surface during a flare.
While the first colonists engineered their crops to resist radiation, livestock are not as easily adaptable. Thus, farmers and ranchers have taken to building buried structures similar to single-floor parking lots in which animals can be moved before a flare. Shielding does not have to be as good as for humans, since most livestock only lives for a few years and hence has little time in which to develop cancers. The intense stellar activity also renders the planet's ozone layer virtually nonexistent, hence hats and sunglasses are common accessories while skylights and convertible cars are all but unknown.
Aviation is little more than a circus trick or engineering stunt, long-distance travel usually being accomplished in shielded traincars pulled by atomic-powered locomotives, or ships with reinforced shelters below the waterline. Space travel has yet to be reinvented.

Most of the inhabited region is controlled by the Second Republic of Eisenhower, headquartered in its capital Jefferston, part of a federal district administered directly by the government. Formally a representative democracy, in practice it is suffering takeover by a political elite who manage the nomination process for candidates and make an end-run around rationing by owning their own oil fields. Many members of this elite are descendants of spacers who fled to Eisenhower's surface after the post-bombardment settled, and display traits of this ancestry such as opposable toes and tall, thin bodies.
To its north is the breakaway state of Hamilton, a former part of the Republic which declared independence about twenty years ago, setting off a slow-burning civil war which remains ongoing.

Eisenhower's societies share many traits with other American-descended ones throughout inhabited space, though perhaps with less individualism on account of the communalism forced by flares and limited energy sources. Most people are members of an ad-hoc religious/political belief system mixing Christianity with American history and ideology, constituting a de facto state religion. Other faiths exist, but are a distinct minority often disadvantaged in the public sphere.
The pre-Age of Strife inhabitants are remembered as the Ancestors, a lost civilization of forgotten technology which nothing current can match, destroyed in the planetwide bombardments. The years afterward, when a thick shroud of dust from relativistic strikes blanketed the planet, was the Starving Times and saw the deaths of most of the already-few survivors. From then came a period of intermixed regression and recovery, as pre-war technology gradually failed and more primitive substitutes were invented to take its place.
For their part, most of Eisenhower's inhabitants assume theirs is the last inhabited planet left, having heard from no one else in hundreds of years. Interstellar history has blended with myth, children tell their parents aliens are hiding under the bed, and a nontrivial minority believes "Old Earth" never existed in the first place.
Parastellis and related works © 2021 M.J. Tremblay/AntimatterNuke, all rights reserved.