Our temples are the battlefields, our hymns are the sound of axes and swords clashing, our prayers are our war cries. Watch us! Watch us as we achieve glory!
— A famous berserker quote

Also called, The Devourer, The Nameless One, The Beast, and many more names; The bear is the deity representing the ideal of pure strength at every cost. While the idea is simple there are no limits when it comes to the ways it can be acquired, though the deity supports cruelty and the worst traits of mankind if it means getting their goal. Considered evil by most except its groups of varied followers, The Bear is quite an odd deity compared to all the other gods. He is considered part of the Pantheon as well.   The main goal of The Bear is to push mortals forward, he works for a world that always tries to become better and stronger than before, those who cant keep up are to be left behind without a care.

Every god in the Pantheon usually rules over a powerful domain or at least used to. The Bear is one of the strongest gods in that respect with a domain that will never fail to support him. His domain resembles willpower and cunning. If you are a conniving politician looking to raise your rank by any means possible, if you are a berserker, a man fighting for his life, a druid following the way of nature; all those are related in one way or other to The Bear. His domain is so general that no matter at what point, only when no living being will remain or wish to aim higher and reach ideal strength, only then will The Bear truly die. Although being so general, he is considered a cruel, malign god; he supports using any means to achieve your goal and considers it a weakness to not use evil acts if needed.   Although the malign attachments, the followers are as varied as his domain, berserkers, politicians, warriors, leaders, spellcasters, bandits, and many many more examples. Most of them though worship The Bear secretly to avoid eyes of suspicion or fear from their friends.   The domain of the bear is considered a paradise of sorts, it is called the Eternal Hunt. Only those who have proven their greatness are allowed in, where they can live their life how they wish, as they go on a never-ending glorious hunt with their god.

The Bear asks for no text to be written about him. He asks for no compliments or sycophants. He agrees to only one request, and that is to watch his followers as we achieve greatness
— An unknown berserker

Most of the gods would demand some form of worship or text, The Bear doesn't care for them, in fact, he hates them and despises followers who don't show devotion only by actions. As such, it's rare if people ever get any gifts from him or any form of acknowledgment, those that do are legendary powerful warriors or leaders changing a whole empire.   The only form of "Holy Text" perhaps are the Books Of Passage. You see, every berserker believes that when you die, before you can enter the Eternal Hunt, you must be judged. As such, every berserker keeps a jokingly large book, where he writes all his feats of glory or describes them in any way he can, even drawings, scribbles, poems, and so forth. When they die, the berserker reads out their deeds in front of the judge before being let in. If one loses said book it is considered horrible, and they must get it back if they are able. If not they turn to the priests.   On this point, the other form of only know passed knowledge are The Bear's priest, people of mysterious background, and nature. They act as mediators between followers and the god himself, being the only known people to receive a response for their prayers. Rarely found, you would be in luck to find one in a berserker horde, let alone out in the world. They also straighten the paths of people, making them reach a resolution and become stronger, as such they are usually nice polite people that help those in a hard time to find a new path and act as missionaries as well as consultants.

The Bear doesn't ask you to follow some deep ideology or any odd way of life. He only wants people to strive and reach greatness in any way they can, so if anything the only real rule he has is to always become better and stronger. The way you do it doesn't matter, betraying, lying, just killing, or threatening are all legit options in his eyes. In fact, he even supports the idea of abandoning morals, citing them as limiting barriers that are only halting people from finding their dreams.   Weakness is death in the eyes of The Bear. Those who are too weak or cowardly to ever aim for something better will never reach his realm, nor will he even look upon them, seeing those kinds of people as insects

The official symbol of The Bear are two bear paws going in opposite directions; one is colored red while the other is blue. The meaning of the symbol is to resemble the two most important things in the religion, being physical strength, and strength of spirit. Other symbols which are used can be actual bear parts, some berserkers are known to wear bear pelts on themselves, or hang a bear's paw around their neck. The priests are known to have an iron pendant of a bear paw.   A less common symbol is a red malign bestial jaw. It is mainly used by the Conall druid cove, bestial druids who believe in a return to the natural order. 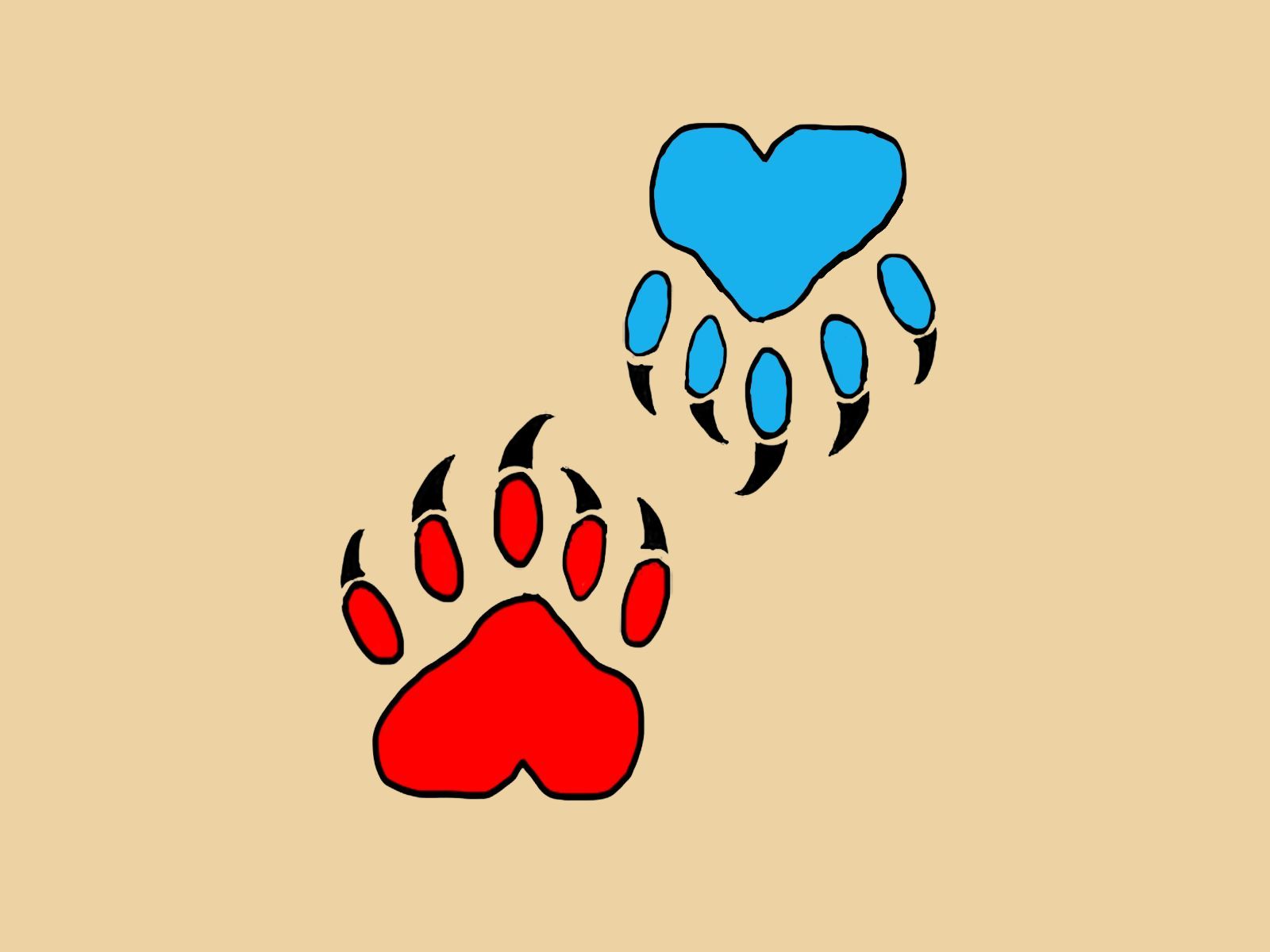 Divine symbol of The Bear