So, you found a way to avoid burning to a crisp out in the wastes I call home, hm? Brilliant, that. I'm afraid it will only get you so far, though, fair traveler.   I do, however, wish you the best.
— Bolkhyn Traveling Merchant

Bolkan is a region located in southern Nefyran, bordering Everbright to its south. Known for its constant volcanic activity and volatile environment, few choose to journey through it, much less make it their home.

Boasting one of the most extreme climates in Malkora, Bolkan owes this feat to the emergence of the Leyline of Agitation within its borders, which brought a chaotic energy to the lands and manifested largely in the form of extreme heat. Amplified levels of volcanic activity have left Bolkan an expanse of ash and blackened stone, hot and dry, with little to no widespread vegetation.   At the center of the region tower the most active volcanoes, some with constant lava floes, others a consistent stream of smoke, and the rest on the brink of eruption at any time. The traveling settlement of Merroun circles these volcanoes, with small structures left behind in varying states of buried and entombed in stone offering hints as to its most recent stops.

The Brightest of Neighbors

With its proximity to Everbright, northern Bolkan often experiences days on end where night does not fall, the residual light of its northern neighbor shining over the peaks of southern Everbright. These peaks stand between the two regions as a pseudo-barrier in the western reaches of their shared border. Reprieve from the glaring lights is offered temporarily by clouds of ash and smoke which pass over much of Bolkan as clouds would, typically blowing westward with the prevailing winds.   Separating the two regions along their eastern border is the Ashen River, which manages to maintain its flow from the aforementioned peaks, through the still-scorching outer plains of northern Bolkan. Often coated in a thick layer of ash, reminiscent of algae blooms, much of the river is shielded from the glaring sunlight in the region, and blocked from evaporating away completely before reaching the sea in the east.

Divine ash smothers the northern light,
and we may rest once more.

An expanse of black stone and lava, as unforgiving as those who adapted to life within. 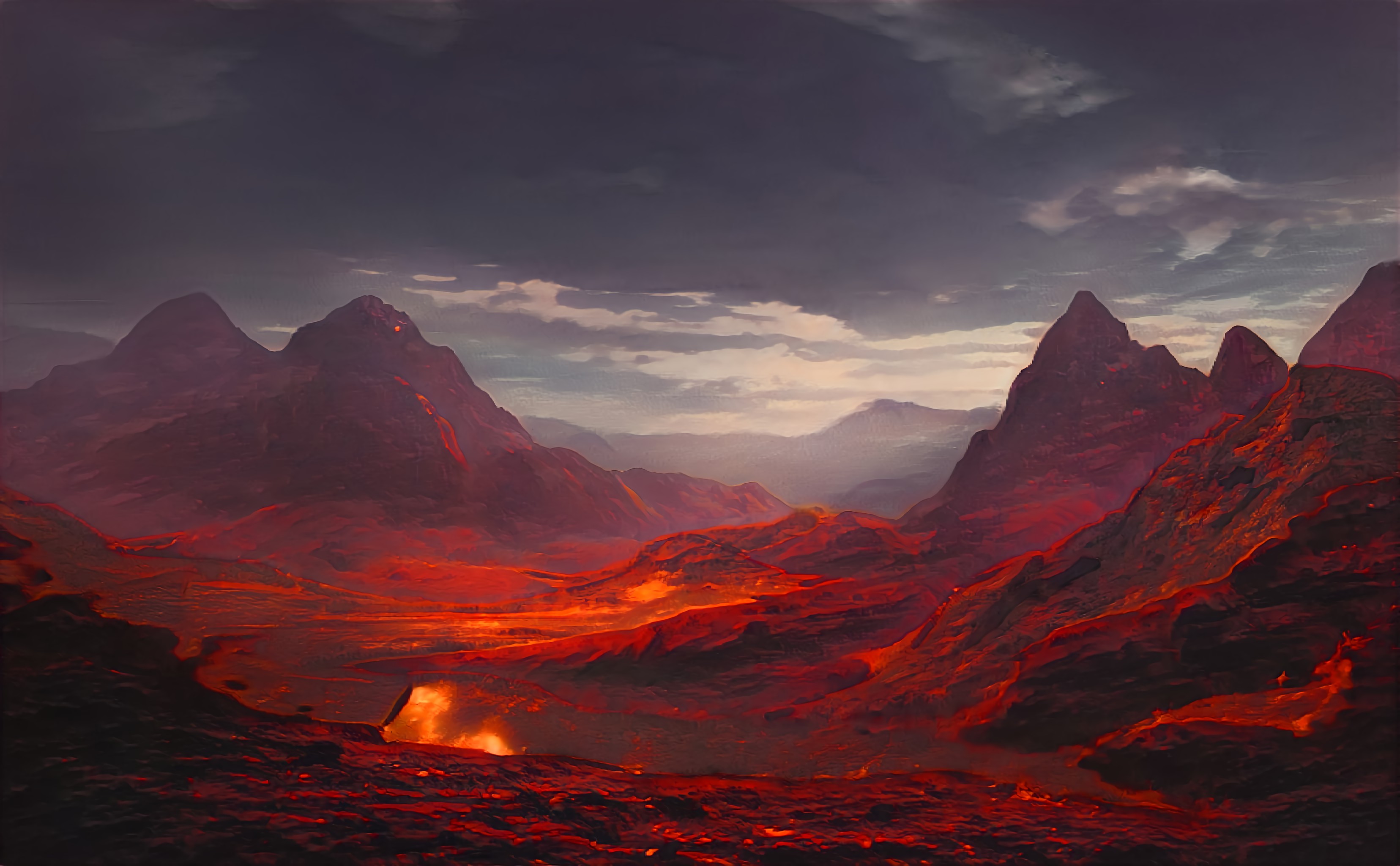 Those who seek passage between such locations as Everbright or the city of Eletta in the north, and the earthen kingdoms in the south, will typically refuse passage by land. Even the outermost plains of Bolkan, beyond the last of its mountain peaks at its border, still see scathing hot days and nights, causing travelers to pursue travel by sea to avoid the heat.

Life from the Ashes

Bolkan is a dangerous place, even for those well-adapted to the withering dry heat. Life, however, has always been known to find a way, even in the most unforgiving of places.

People of the Blasted Lands

Though an inhospitable home to most, the Bolkhyn people have come to adapt to a life amist the lava floes and choking ash customary to their region. Comprised largely of flameheart iskani, as well as other races such as the flame-bound nimata, the population as a whole is well-adapted to survival in these extreme conditions.

The Bolkhyn are a solitary people, a choice made for them by the environment they call home, though they reap the benefits of a lasting peace from outside forces. Lovers of the arts, many of the Bolkhyn trade exports are materials such as masonry stones, volcanic glassware, and specialized pigments. Much of the stone exported from Bolkan is known as Bolkhyn Andesite, quarried by those who reside in Merroun.   The city of Kamigon houses the vast majority of the Bolkhyn.

The Bexarem, seen as a subgroup of the Bolkhyn people, are native to the northen reaches of Bolkan, where Everbright's light still shines over the peaks of the bordering mountains. Unable to leave their homelands for reasons unable to be gleaned from the populace, these self-sufficient people survive largely on their own, producing intricate miniature glasscraft and worshiping the Ashen Divine.

There's just oodles of great ideas in here. I love the idea of leylines having names, which is a new concept to me. And I could perfectly picture the Ashen River in my mind as you described it. Well done!

Thank you! I'm glad you enjoyed the article! I took some inspiration from MTG with naming the leylines, heh. I'm thinking some time soon I might make actual articles about the leylines and what they really do in this world, but that's a topic for another day! :D

A solid walkthrough of an interesting area! I like how you tied in the surrounding regions, and brought up how they, particularly Everbright, affect Bolkan.

Thank you! I'm hoping to develop more of this continent during SummerCamp, so finding the tie-ins between regions seems like a neat way to do that!