Introduction to the Cylinder World - an inside view

Oh, hi there! By the spirits, I didn't even expect someone to come! Please, come by! Take a seat, or sit on the ground, whichever suits you best.   You carefully approach the office full of old books, parchment rolls and strange curiosities.   Allow me to explain. I suppose you have no idea where you are, nor how you arrived here? You must be fairly confused, aren't you? I feel you, friend. I truly do. My name is Wakey. Or, well, that's the name I was given when I arrived here. See, I arrived here the same as you! A few years back, I appeared in this dark corridor. There was no one around to greet me, and I had no memory whatsoever from before about where I came from, or anything really. As such, I panicked a bit. I moved around, until I found my way to someone. It still took me some time to get used to, well, living here. Which is why I'm here! With a few other librarians, we do surveillance shifts there, in case someone like you or me shows up, to try and explain things.   Anyway, here we are: welcome to the Cylinder! I'll try my best to give you some answers, and guide you for a little bit.


Yes! Quite the impressive thing, in fact. We are inside a gigantic cylinder, rotating on itself. On one side of that world, is the Circle : a great source of light, that feeds the plants, marks the days and the seasons. On the other side, is the Space: it is a dark circle you can always see in the horizon. Who knows what lays after it?   This here is a map of the Cylinder world. To give you a better understanding of how gigantic it is: if you started walking toward the east, it would take you more than sixty two days to walk around the Cylinder back home! And that's if you never stopped to sleep or eat. if you walked a more reasonable distance every day, it'd be even worse: you'd take more than two hundred days! Pretty vast, isn't it? 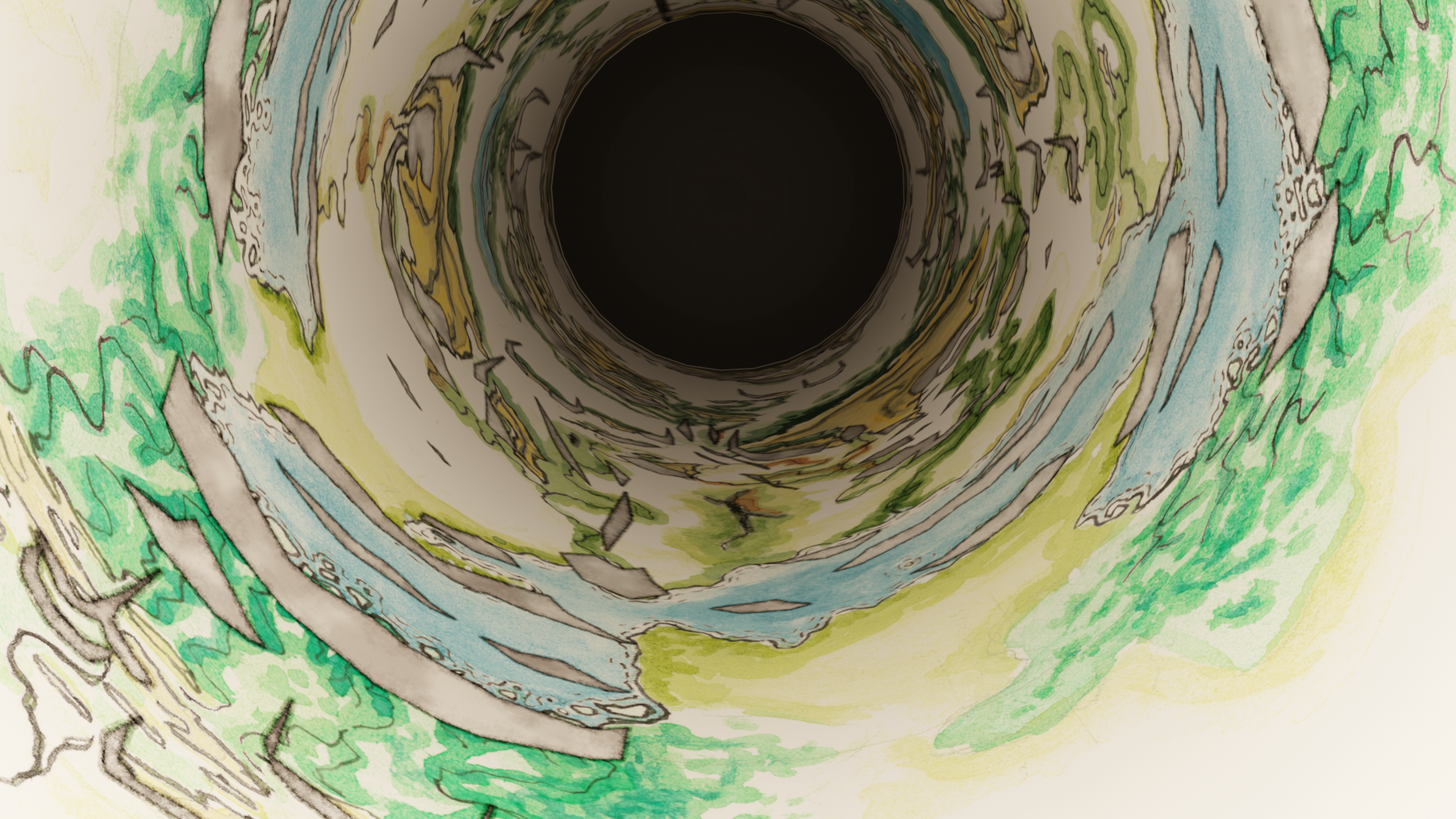 
Where are we right now?


We currently are in a city called Merinos . With a bit less than three million it's almost certainly the largest in the whole Cylinder! Here is a map of the city, if that interests you. As you can see, it is divided in districts of varying wealth, and cultural influences. Merinos is a great city-state, at the center of a gigantic trading empire! As such, many people emigrate to try their luck in the city.   To be even more precise however, we are not anywhere in Merinos. We are inside the Great Library , one of the many mysterious structures of the world. The Library is a huge contraption, that is largely underground. Some say it is as old as the Cylinder itself! As a result, it remains largely unexplored. Even the uppermost alleys, that are controlled by tribes of scholars and communicate with the outside world, are full of surprise. I don't think we can really imagine what dangers, what mysteries lay in the deeper galleries. 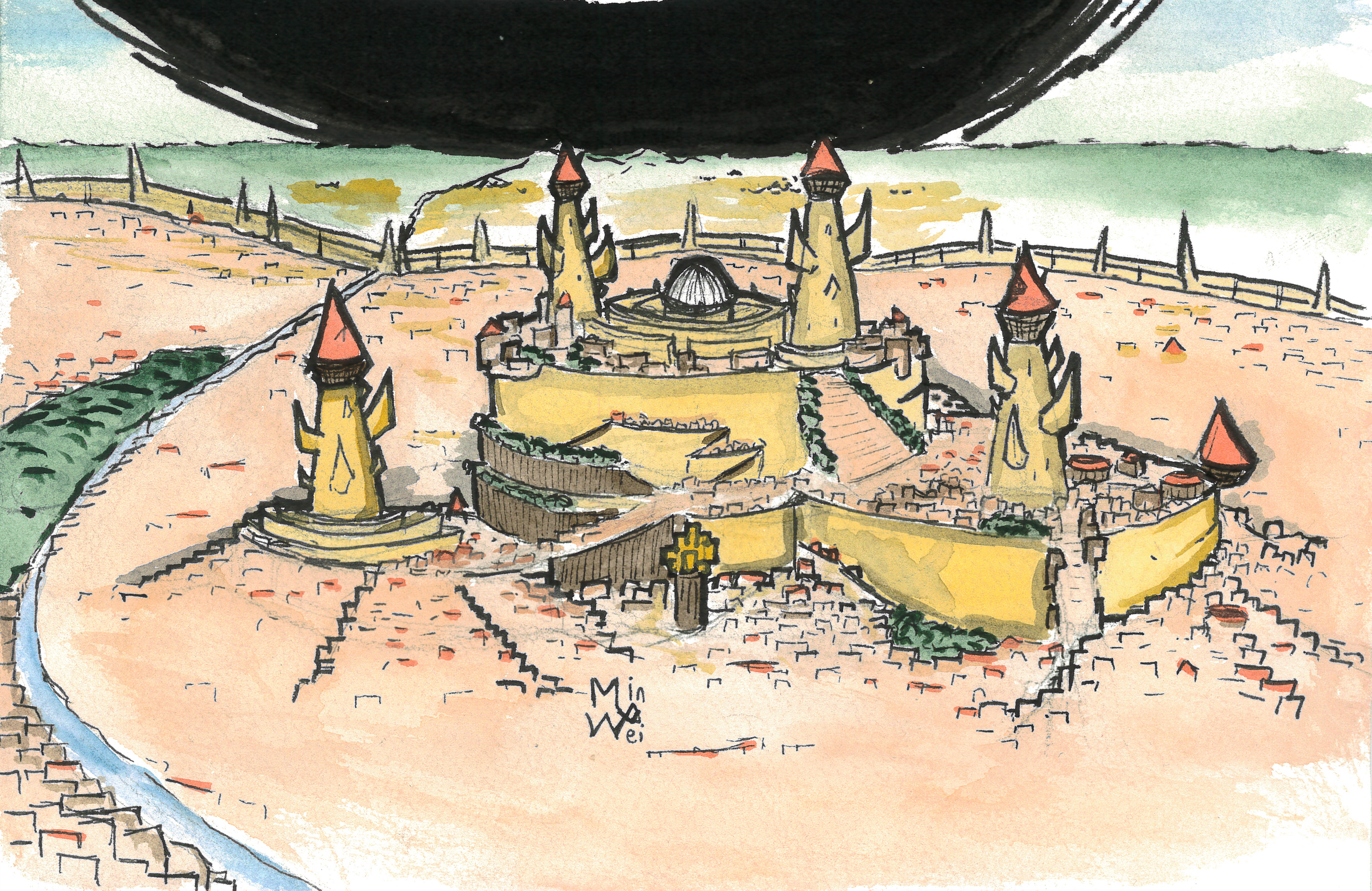 
Where do I come from? 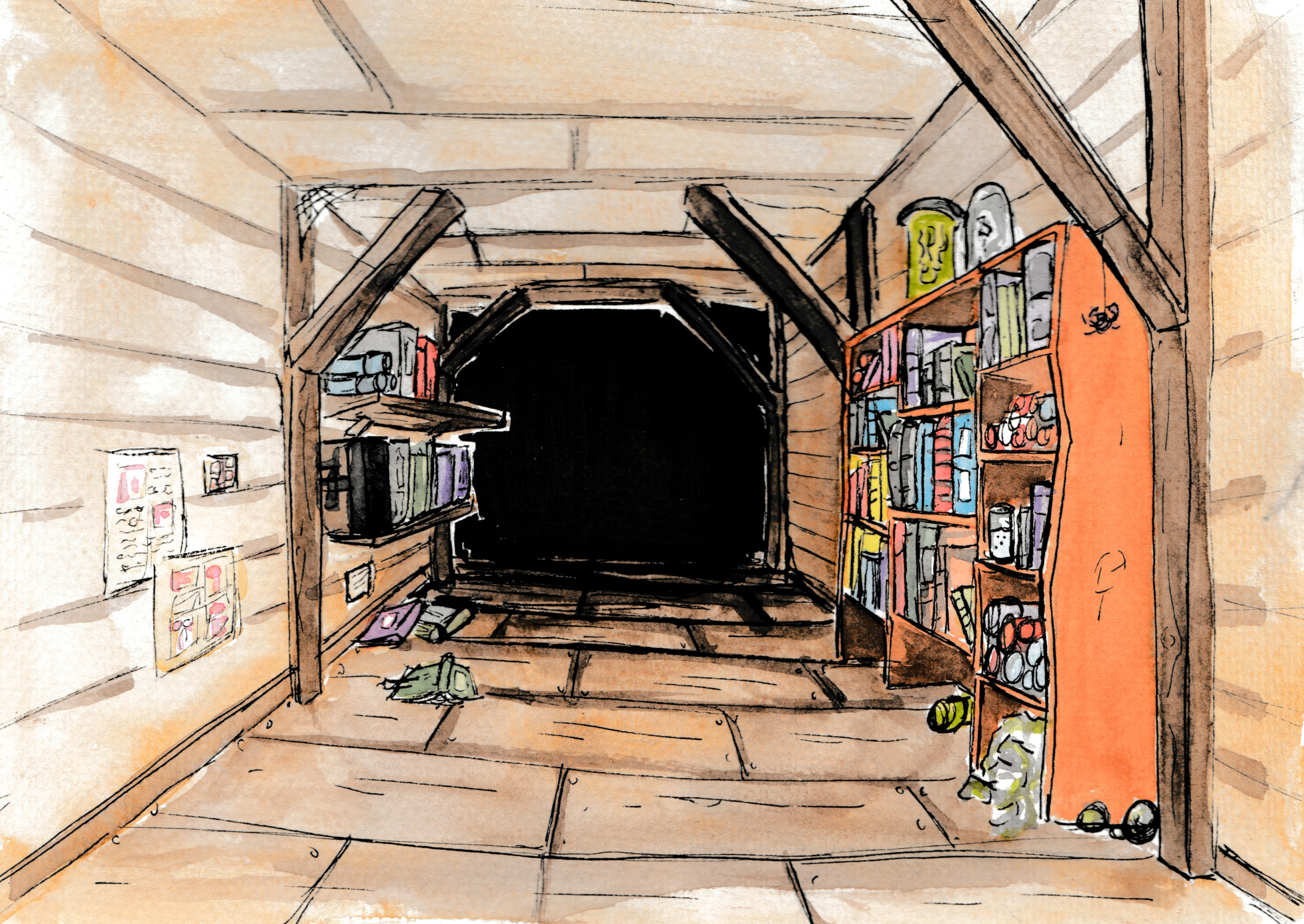 Heh, that is a good question. We don't really know. Among library scholars, we call that hallway you came from the Bookbirth. Pretty bad name, I know. I think it comes from an urban legend that used to run in the library. They say that the people like us, who come from the hallway, are not actual humans: we are books, and spirits, taking a human form...   Of course, that's probably bollocks. It's just that people like to give a religious dimension to things they don't understand. Truth is, no one that tried to explore down the hallway ever came back. We don't even know if it connects elsewhere or is a dead end! You see how the hallway is really dark, in the end? That darkness isn't natural. Some people try to go in with a candle. I even saw someone tried to light up a torch there: nothing does it. As soon as they are in the dark, we don't see them anymore.     Once, I saw an expedition of two try to go down the Bookbirth. They were well-equipped: they had torches, and they had attached ropes to the entrance of the hallway, and asked us to pull them out after a half-day at maximum. As they disappeared into the darkness, they told us that their torches weren't really working: they'd try to go further in, see if that darkness would get clearer after a while. That's the last time we ever heard them. When we pulled the rope back, it was empty: it was still well-knotted, they just weren't there anymore.   I know what you're thinking: "gee, what stupid adventurers! Seeing something as unnatural as that, I would immediately try to go back!" And, I guess that's true. But you have to keep in mind that the Library, and most of the Cylinders underground, is really weird. It is often that the darkness are thicker than it should be, and in some places that's harmless: just a tad spooky.

A world of conflicts

That is a bit of an exageration. Of course, there are conflicts in the Cylinder. It just goes with having people in it! That doesn't mean the world is defined by its conflicts.

When you start moving around, you will start to notice that humans are not the only people in the Cylinder world. I don't really know why, but that was a surprise for me at first. In any case, there are several very different species of birds, and even some much rarer species of canids and bears that all are just as intelligent, social, and self-aware as human. Maybe even more. Yet, somehow, humans have spent quite a bit of their history treating them as inferiours. A lot still do, society is rigged against non-humans. Hell, some Perrots are enslaved even in Merinos!   Things are even tenser nowadays. A war just broke out in the South-East, that may very well light the world on fire.   What I'm trying to say is, if you meet a Perrot or a Condor in town, treat them as your equal. And please, please, please, do not call it "bird", and even less "Chicken". 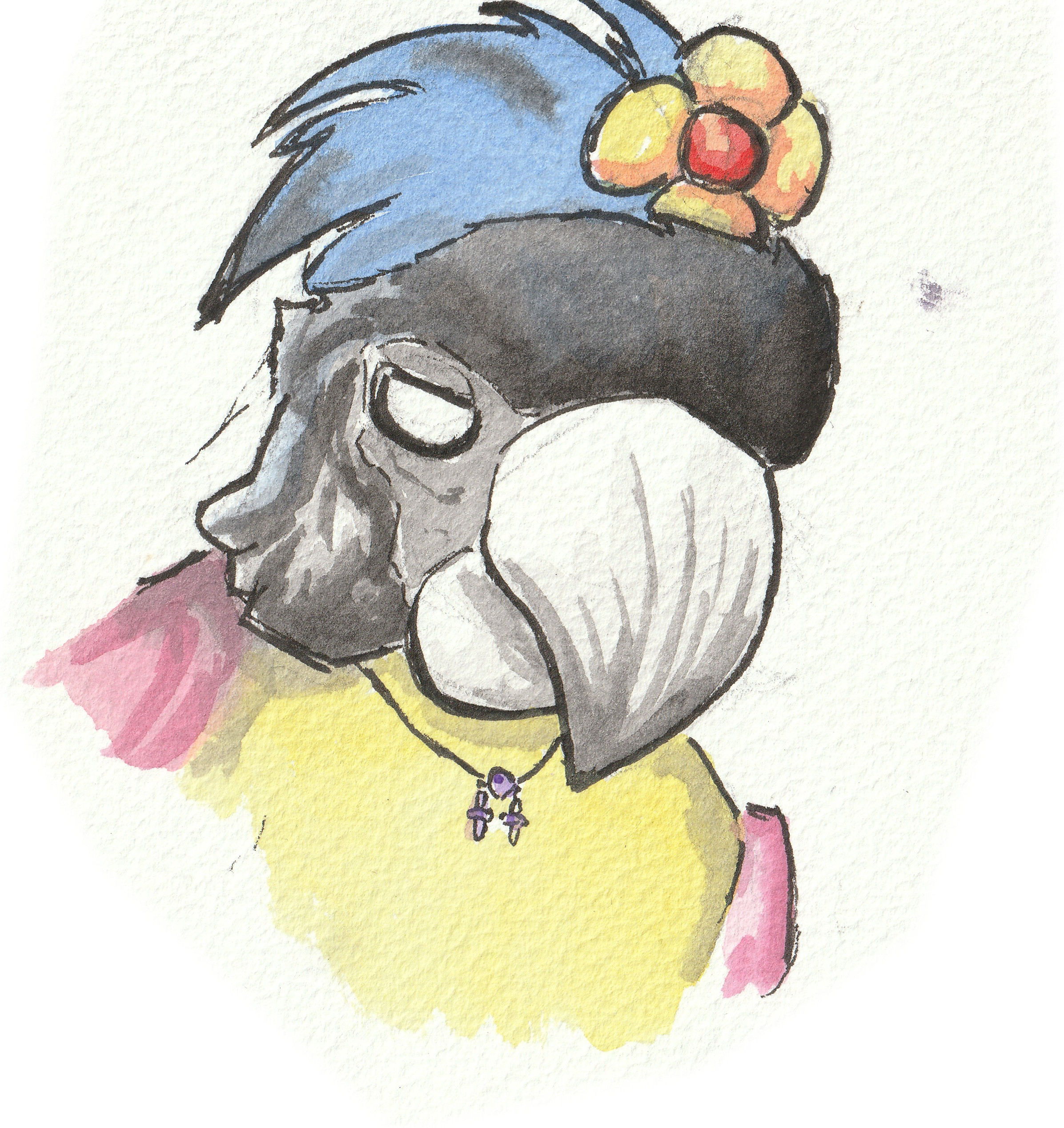 I guess that's because we social creatures have a natural tendency to make a distinction between "us" and "them", but cultures tend to clash against one another. As you may expect from a structure that big, the Cylinder is full of various cultures and ethnicity. Everywhere, peoples have adapted to live in their own, unique, environment. The variability of all these cultures is so great, a generalization would be unwise. Yet, one major "divide" can be observed roughly everywhere. Or, well, two poles in a continuum. See, about half the inhabitants of the Cylinder lead a nomadic lifestyle, while the other are sedentary farmers organized in city-states. Obviously, all these merry peoples clash a bit. City-states try to invade each others. Sedentaries try to gain more farming ground. Nomads either try to trade with the cities, or try to raze them to the ground. 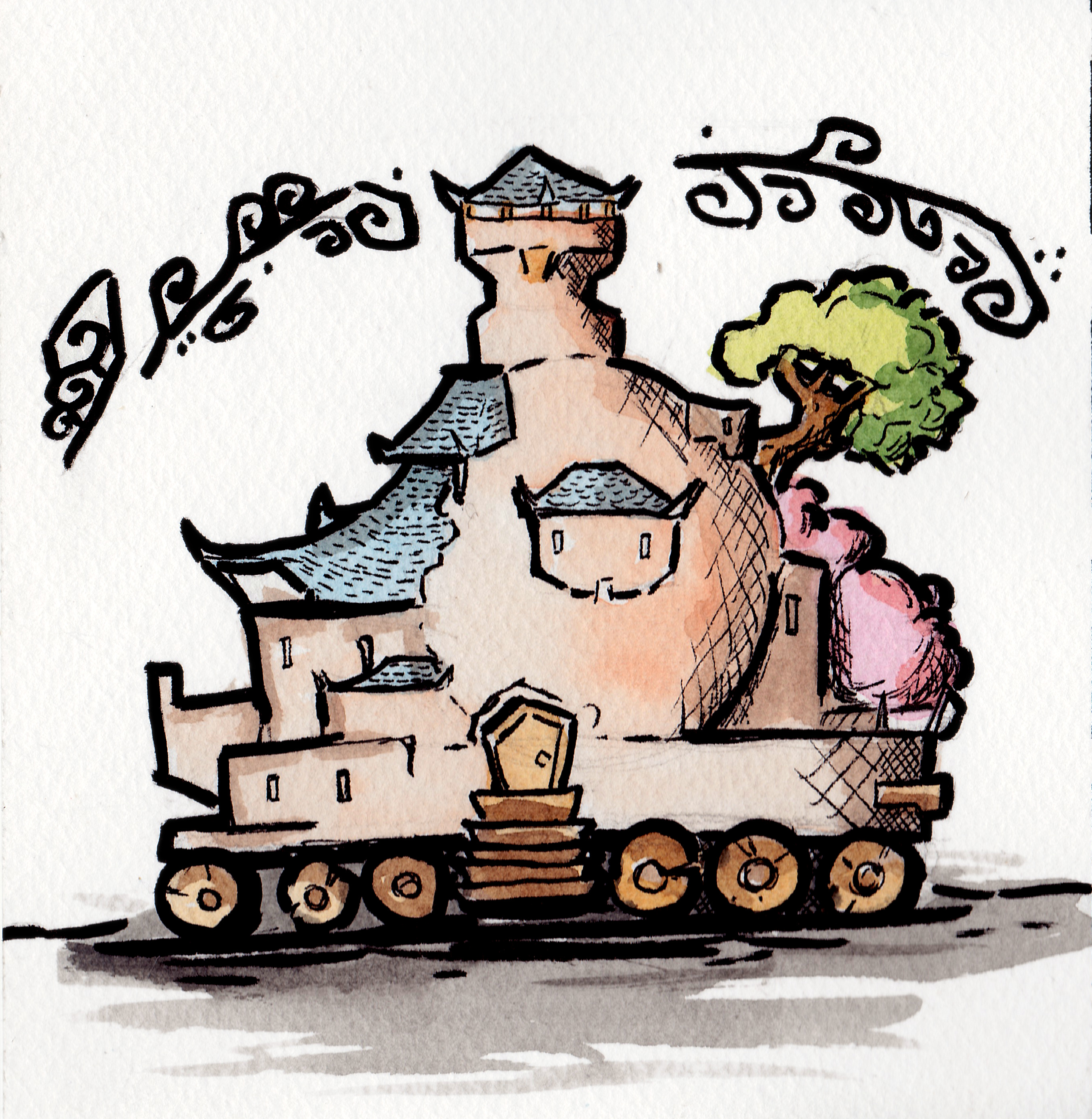 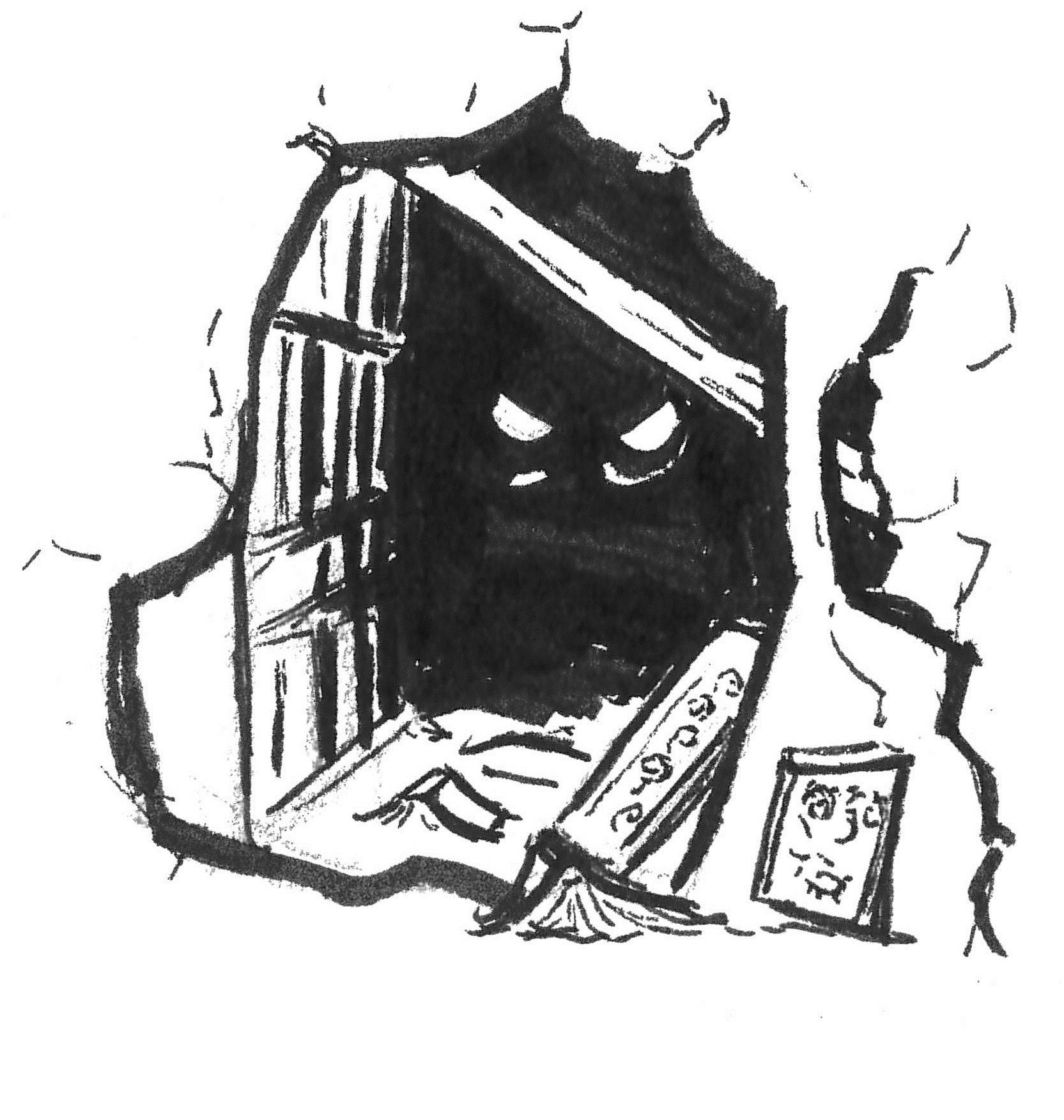 by Pouaseuille
The Cylinder is a weird place, where strange things happen. Here, consciousness is both more tangible than what you'd expect, and yet harder to understand. Here, spirits wander from mind to mind; Shadow Creatures lurk in the underworld, ready to gnaw on your brain; objects can be enchanted using Ghostpowder and algorythmic languages.   The last scope of conflict in that world, is both greater than nations, and at the scale of one individual. It is a clash against one's own madness, a clash between forces that don't even seem material.   Fun times, isn't it? by Pouaseuille
Alright, I think that's enough information at once. Now, if you want, I'll let you wanderer more freely. Can you take this pendent? It'll indicate to most scholars, and people living in or related to the Library that you are a "Bookborn", as they say. They should let you visit most places inside, and they can help you if you want to go outside in the city. Not to mention, the pendent is enchanted: it doesn't do much, but it still should let you opened a few protected doors. Not all of them, though.     Of course, I'd suggest you first spend some time in here ! I mean, you can learn a lot about the Cylinder while staying inside, and as long as you stay in the main alleys, the Library is a bit less disorienting than the outside world. Don't explore it too much, though.   Finally, here is my book ! There is not much about it, but I summed up some information about the world here. It is a bit enchanted as well: whenever you are in some new place, you'll find yourself opening the book right where you need.

What do you want to read next? 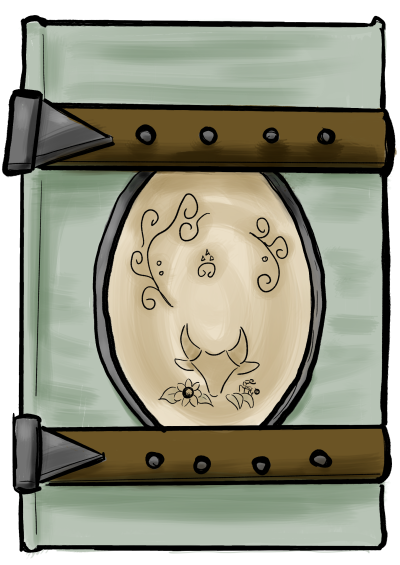 This tome describes the greatly diverse lifeforms that inhabit the Cylinder
... The Book of Life 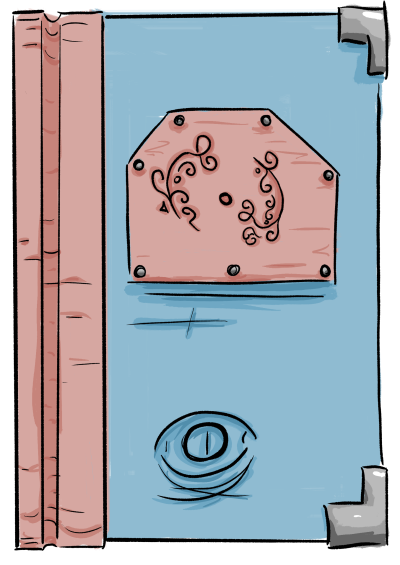 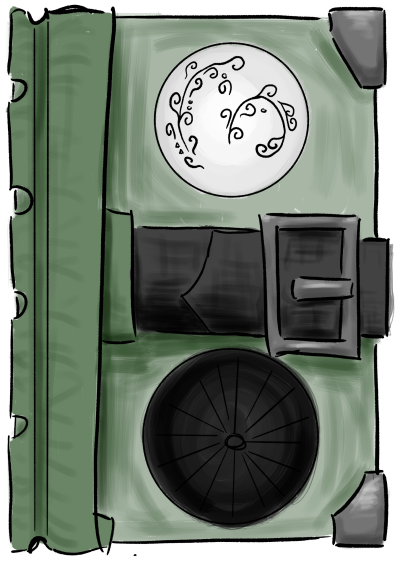 This category displays the Merinian knowledge about the structural and climatic organization of the Cylinder.
... Structural Kylindrography 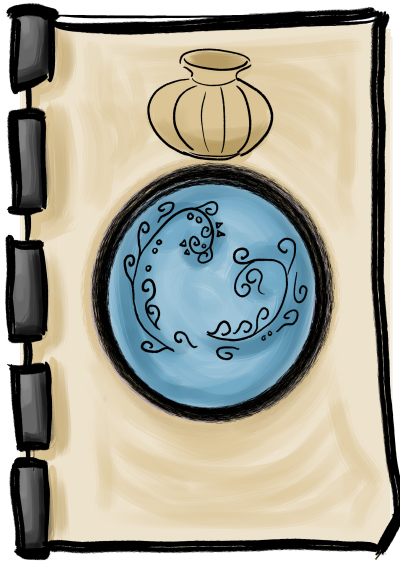 An encyclopedia describing sociology in the Cylinder. From tribes of men to civilizations, with the addition of bird cultures
... Sociological Encyclopedia 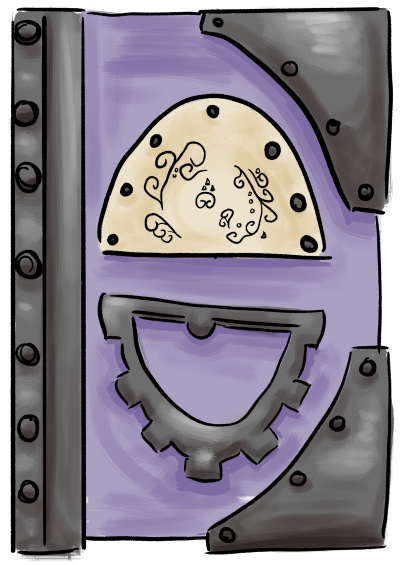 Practical things that were invented recently, or are widely in use in the Cylinder
... Technical magazine 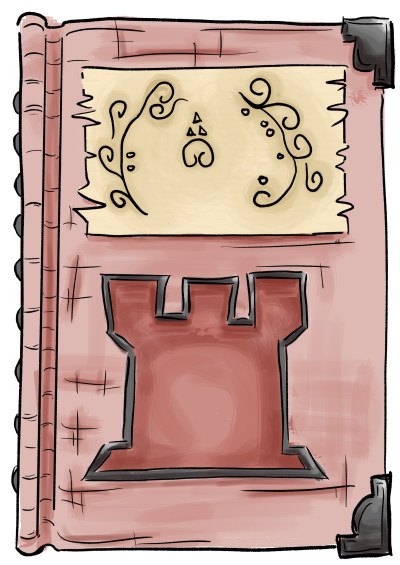 This article is just purely amazing! I love how you took up the role of a fictional character named "Wakey" and took us through the Cylinder, a world concept that is quite nice to start with (you don't come across cylinder-shaped worlds on a daily basis, you know.) and you've elaborated on it quite nicely too. You've used simple words, yet conveyed massive amounts of information without making it feel like an exposition dump. When it comes to the maps and drawings, i'm simply speechless. They look neat and fantastic! The colours give out a very warm vibe, and the fantasy feel is captured nicely. In short, I love your article. I look forward to more amazing articles like this.

Thanks a lot for your comment ! I'm glad the idea of a presentation from that character was well-taken : I wanted to keep an internal point of view for this introductive article. Glad as well that you liked the artworks! I sure do have more to come.

Speaking of which, I should pull myself together to write my own world’s meta article.

It is a good idea! It can both help a reader to understand what's going on, and you to keep in mind what the central pieces of your work are ;)

I just finished my meta article! Check it out here: https://www.worldanvil.com/w/acciphere-lucas-wilde/a/welcome-to-acciphere21-article?preview=1 Any kind of comment is appreciated!

If I'm not mistaken, i cannot access the article. Are you sure it is public?

Sorry, I forgot to make it public. Check it out now. It's published. Sorry!