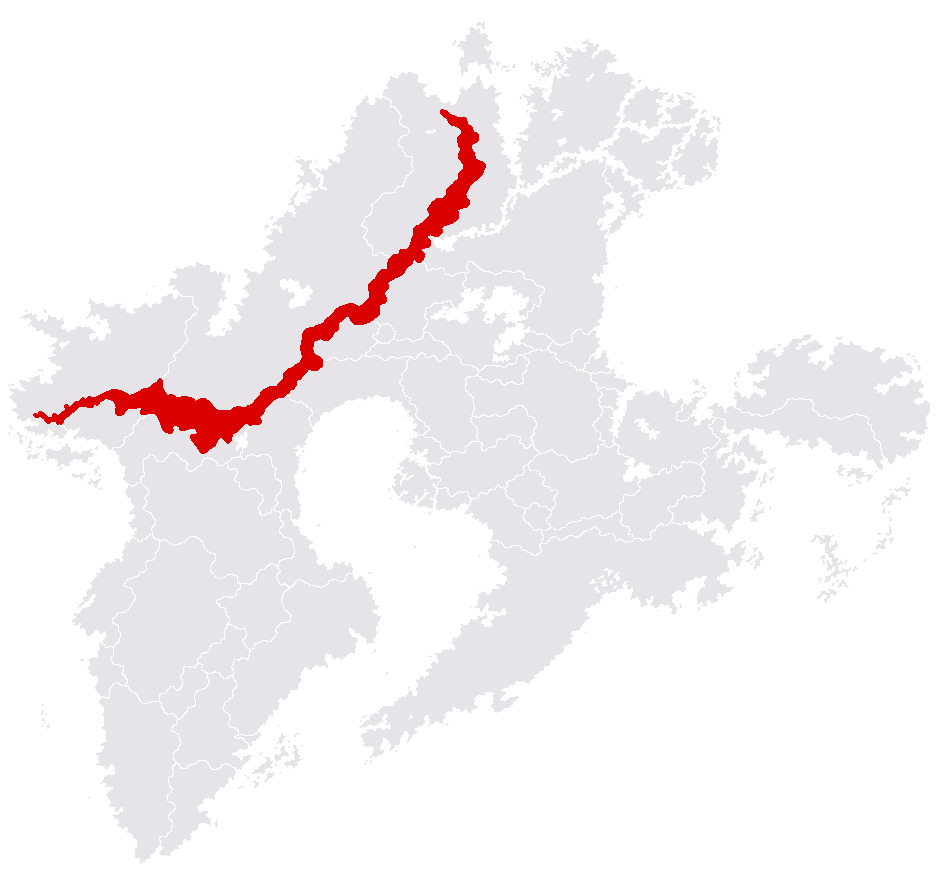 The Divide on a Map by Mihkel Rand
The Divide is an impassable mountain range that splits the continent in half, separating the south from the north. The safest way to get to the other side is by going around them. The mountain range consists of the highest peaks on the planet

To the north of the Divide is the Northern Lethea region and the Empire of Lorgzilin, a state with a brutal absolute monarch who demands his servants worship him as a God. The Divide is referred to as the Southern Wall by the Lorgzilians.

South of the westmost end of the Divide is the Kingdom of Hlulane and their overlord, the Empire of Le Zhea. Le Zhea used to own everything south of the Divide, back when their country was still called the Empire of Lethea. The Divide was the main reason why they couldn't expand northward. Attempts were made by invading through the western passages, but they weren't prepared for the temperatures that awaited them on the other side, the narrow and bumpy passages had made logistics a nightmare as supplies had been hard to come by and getting wagons on the other side safely was, and still is, a challenge.

South of the Divide in the Southern Lethea region lies the Theocracy of Athe, the Federal Geniocracy of Ithelmark, and the Federal State of Alminthas. All three of those countries have criminalized attempted scaling of the mountain range. The punishment is different in each country. In Athe, it's a hefty fine, but in Ithelmark and Alminthas the fine is small, but they also include public humiliation.

There are plenty of small tribes and petty kingdoms that are also next to the mountain range, but as there are too many of them and as they aren't recognized as proper states by the international community, they will not be mentioned.

The mountain range consists of the tallest mountains on the planet, the largest of which is Mt. Oltisis. Going over the mountains is all but impossible, many have tried, but none returned. The only one people who have successfully gone over the mountains were the Alp-Ak goblinoids who slowly traversed over in hopes of finding a better and safer home. Eventually, they settled next to the Lostriver and became known as the Lostriver goblins.

Going around the mountains is far easier, especially from the southern passages. The northern routes are colder and more dangerous, but still far safer than going straight over the mountains.

Nice map Dhelian! I know you're probably still working on it, but remember to link wherever it is! I'd love to see what nations are around it :D

It's a good start, and the maps are great! I was briefly confused by Hlulane and Le Zhea, since when I first read it I automatically assumed Le Zhea was just the name for the ruler (I know, I didn't read thoroughly). I think it is because an overlord for me is more of a person than another country. To make it more clear, I would consider naming Le Zhea first and follow up with "who made the kingdom of Hlulane their vassal".   What intrigues me is the reason for the laws against climbing the mountains. Religious reasons? Don't want to have to clean up crashed attempts? Don't want to upset the Northern side? Are there treasures up there?

Thank you for the feedback! I'll make the whole vassalage sentence clearer by the end of the day and as for the laws regarding the climbing of the mountains, the main reason why it's banned is because all who tried crossing them died, and so to discourage such attempts, the governments criminalized them.   The Northern and Southern side don't know what lies on the other side and so a fear of the unknown also played a role. The governments were afraid that if someone actually managed to get over them, whatever was on the other side might notice and start causing problems.   I'm still not sure whether the mountains contain treasure, but I suspect I might add something interesting there one day. Maybe when my D&D party tries crossing them in a future campaign.   Again, thatnk you for the feedback!