The continent of Lethea is the largest landmass on Ryel and it's divided into four distinct regions. The people and the countries in a region tend to have cultural or religious similarities or just share a lot of history with one another. 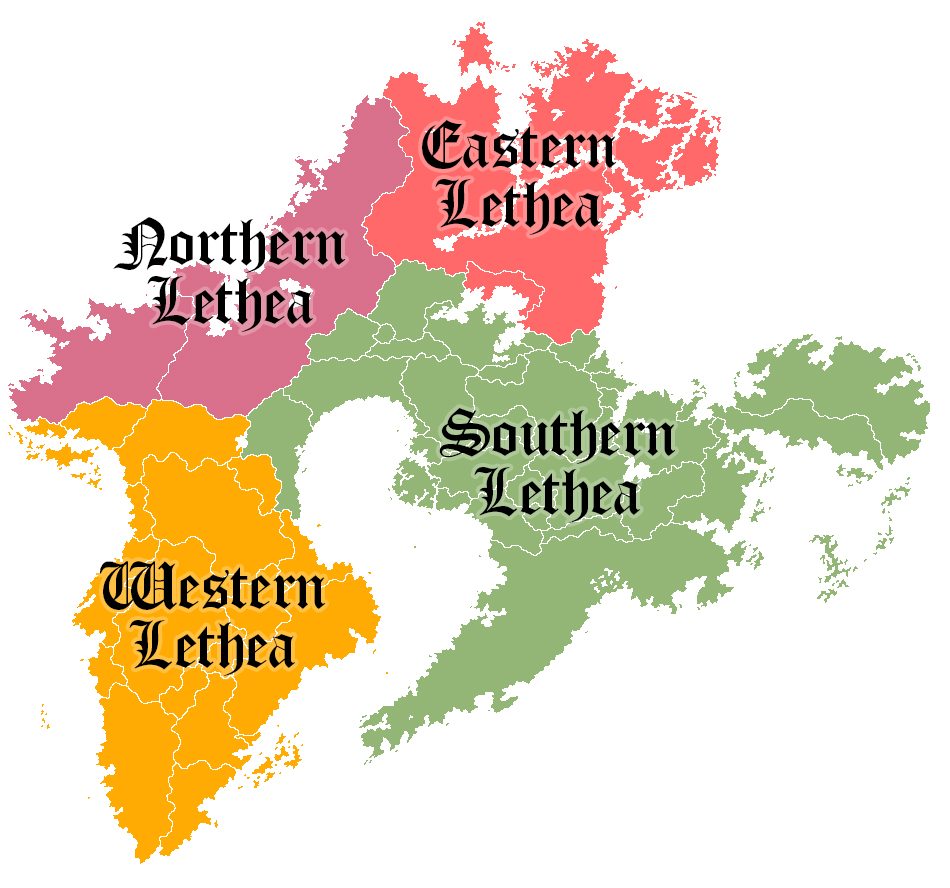 The countries that lie to the south of the Divide, the Great Saralian Lakes, the rivers Vigil and Renflow, and east of the Vemari mountain range, are considered Southern Lethean countries. The ancestors of the people who reside there have survived the Invasion and are now they are the most well developed in the world. Many countries in the region have adopted some form of Abreanism.

Everything west of the Vemari mountains and south of the Divide is considered Western Lethean. Most of the region is an inhospitable desert, where only the hardiest nomads can survive. To the west of the great Rahigina desert, lies the Kingdom of Hlulane and their overlord, the Empire of Le Zhea. Le Zhea once ruled everything south of the Divide, their home islands are a lush tropical paradise with massive temples and palaces built for their god, the sun.

Everything northeast of the Great Saralian Lakes and the rivers Vigil and Renflow is considered to be the Eastern Lethean region. The region also covers territories over the Divide, such as the vast Sor Mabdul Kazaks forest next to the Empire of Lorgzilin. The region is home to Cehvox, the homeland of the Invader, but his once great state was severely devastated during the first few years of the Invasion, after a group of mages miscalculated and instead of destroying the terrain around the Invader's army, they instead missed, turning a fertile grassland, inhabited by a peaceful people, into a horrible swamp. Their spells caused the land to crack and many Cehvoxlier cities fell into the new gap in the earth. The region is also home to Nehenian clans and the Order of Dantalax.

Everything north of the Divide and west of Sor Mabdul Kazaks forest is considered to be Northern Lethea. Most of the region is under the Empire of Lorgzilin, except for the territory west of the Baevelic mountains. Though the rulers of the land are orcs, many giants dwell around Golat's Shield, a mountain range that had kept the orcs from expanding for centuries, and Yinhare, a forest with trees far taller and thicker than the giants who live beneath them. The Divide and the Baevelic mountains are home to different goblinoid tribes and all of them have sworn fealty to the Lorgzilian monarch.