A long time ago, back in the early spring of 2018, I was running a heavily homebrewed game of Dungeons & Dragons 5th Edition for two of my friends. One of them was a strange tall man who desired to preserve nature and develop deep bonds with wildlife and the other character was a stubborn man whose ambitions knew no bounds. Throughout the course of the game, a campaign that had already gone on since the autumn of 2017, the two players became nobles and the stubborn ambitious character became the count of a region they had taken from some goblins. With the blessings of Tambet Sarap, King of Sarala, Rick Goldsworth became the Count of the Autonomous Saralian County of Elhenila.

Now that he owned land that the goblins previously held, he had to worry about improving Haltjalohe, the castle he had conquered, but his entire land was mostly uninhabited, and so he and his trusty companion Gandorf went to out to find colonists and soldiers. Eventually, the goblins attempted to attack the castle, hoping to take back what was theirs and during the battle, both I and my players noticed that due to a large number of tokens on the battle map, our browsers had suffered from severe lag. 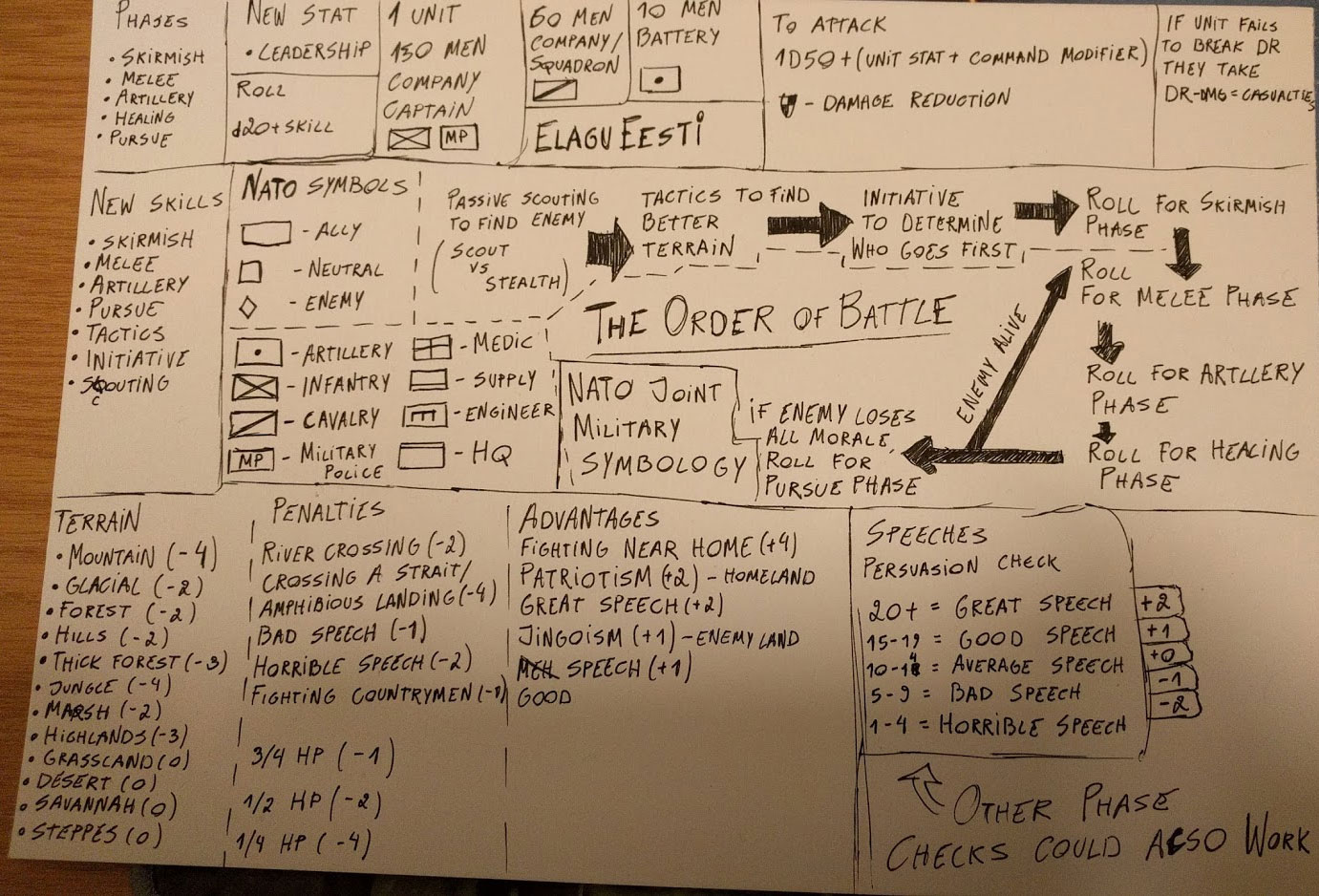 Original design document
Knowing that more battles awaited them in the future, I began trying to figure out a way to solve the problem. At first, I looked into existing wargames, but then quickly realized that I had plenty of free time and that developing something on my own seemed like it would be more useful in the long run. Not only would a system that I developed myself be more suitable for my setting where normal medieval infantry companies exist alongside towed artillery and battlemages, but it also meant that I would know everything about the rules.

I began the project with a simple blank A4 sheet of paper and a black pen. At first, I began looking into the combat systems of grand strategy games Europa Universalis IV and Crusader Kings II. From those games, I came up with the first few features. Both games had phases that the combat went through and both games penalized attacking enemies across a river or on higher ground. I wrote down the phases on my blank paper and after that, I came up with the idea that the player character in charge of the army should have skills related to those phases.

Originally the skills I wrote down were Skirmishing, Melee, Artillery, Pursuing, Tactics, and Initiative, but later I scrapped most of those and now the player has to invest into a specific unit related skill. How upgrading a characters skill works is still unknown and will depend on the tabletop roleplaying system. Tactics and Initiative will likely be the only skills out of the original six that will end up staying.

After I came up with the different unit types, I began coming up with ways how I could represent them on a battle map. As I had played a lot of Hearts of Iron IV during that time, the solution seemed obvious. NATO Joint Military Symbology was the best way of displaying the units, but unfortunately the modern symbols weren't all that good for units such as light and heavy forms of infantry and cavalry, and so seeing as I had the power, I opened up Adobe Illustrator and began coming up with a way I could easily adjust the NATO symbols to represent the units in my battle system.

I kept the original symbol and added a small indicator that helps identify the unit as either light, heavy, archer, or pikemen, and for the battlemages, I used the symbol that normally represents rocket artillery. With these symbols, I was another step closer to a functional system, but the main thing was still missing. I didn't have the stats or skills of the units and I lacked a way of displaying them. 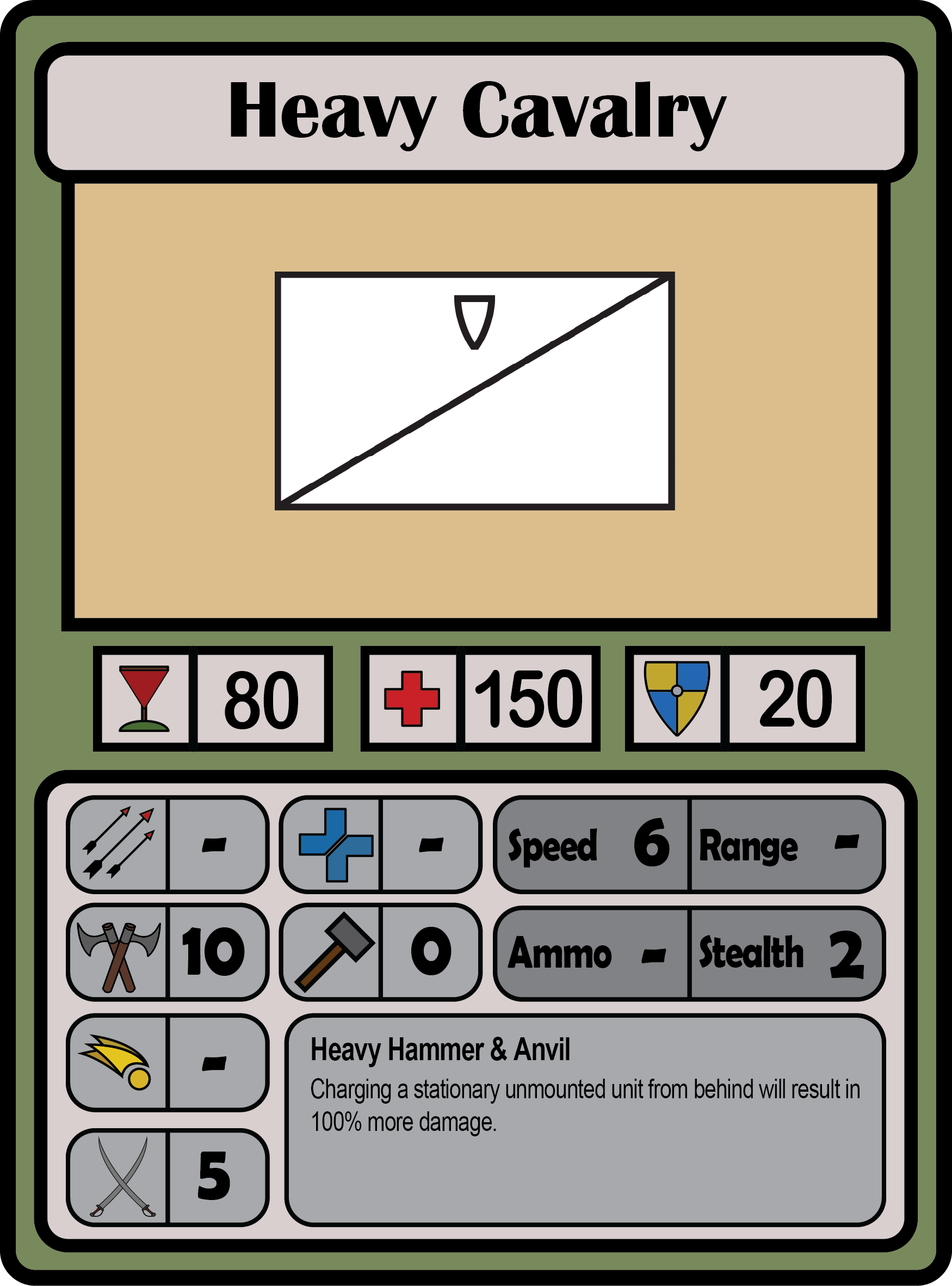 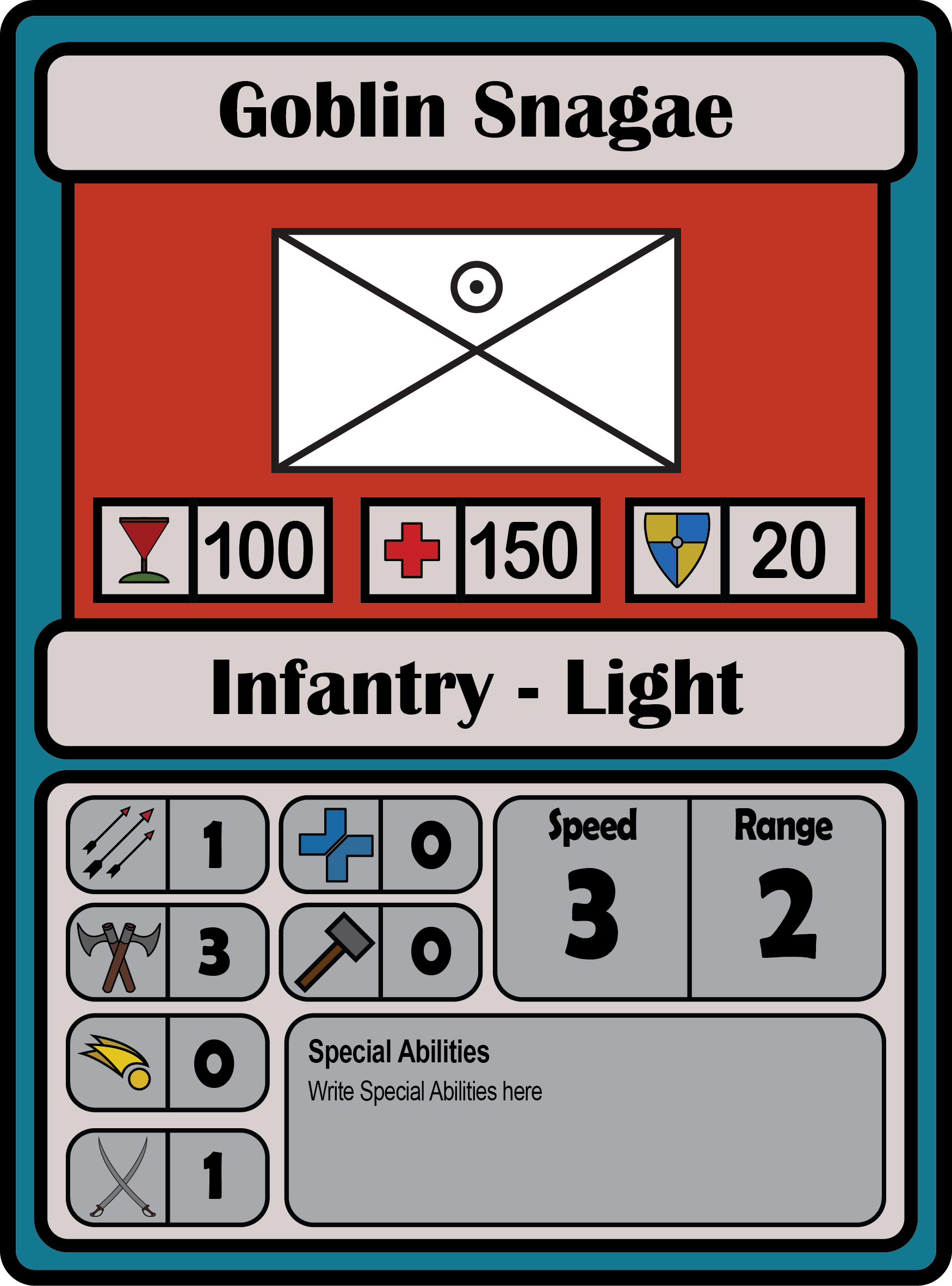 Early version
Around the same time as I was developing the system, I had become interested in Magic: The Gathering and that gave me the idea that I should create cards that displayed all of the important information about a unit. I made the unit cards using Adobe Illustrator and they went through multiple iterations until I was finally happy with them. While making the cards, I also came up with the skills, I added a damage reduction and morale stat for each of the units, and I learned more about modern militaries and unit sizes. Eventually, I decided that a normal infantry unit should consist of a hundred and fifty soldiers and that a unit would be called a company, or squadron when referred to cavalry. Later I also came up with smaller unit sizes for artillery batteries and support units. 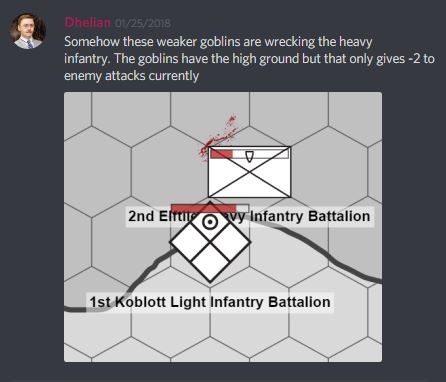 Once I had the unit cards and all the units had their stats, I began the first playtest. Since the test that I wanted to do was just a quick fight between two units, I did it on my own. Deciding that it would be a good idea to have a fight between my player's units against the goblins, I gave the players a unit of heavy infantry and their foes a unit of light infantry. In order to test out terrain related bonuses, I gave the goblin light infantry unit the high ground and as a result, the goblins won against the superior force. This test took place on the 23rd of January.


Stealth Currently, all units have a stealth skill, but what the skill does is unknown. The plan is to have the stealth skill for ambushing units. At the start of the battle, the player will be able to hide their units. How hidden units will be detected is still unknown.

Special Ethnic Units Each ethnicity will have access to a special unit that only they will be able to recruit normally. These special units could still be hired as mercenaries, but due to their rarity, their price and upkeep costs will be far greater than every other unit's. These special units will reflect the culture and environment of the unit's ethnicity.

Maintenance Costs Currently the heavy infantry unit article mentions that the unit is expensive, but what that means is currently unclear. Specific base values have to be created for each unit, but that will be done once the economy of Lethea has been sorted out.
Battle System

<3   It's awesome to see the thought process that spawned a world here on WA :D   It's making me want to play in RPG campaign where I can become a joint-ruler of a domain with my fellow adventurers!